For years, the notebook had rested in the deep drawer. It not only looked old, but also forgotten: a uniform layer of dust covered it, indicating no one had touched it for years, maybe decades. With a sense of respect and curiosity, I opened it randomly and read: “[…] common in those days, he could not hear us. When the bombs started falling, and with the sounds of shots everywhere, sometimes you would go temporarily deaf. Or perhaps he did not want to hear. By the end of 1917, we were all tired of the war and the rough conditions on the Western Front. If we only knew that the end was relatively close… for him, though, it was even closer.”*

The Western Front – 1917 – Training Camp 1, at Frideswide, is one of the most powerful experiences I have seen in Second Life. It was initially associated with The First World War Poetry Digital Archive, “an online repository of over 7000 items” based at the University of Oxford that consists of both primary material from poets of the time and image, audio and video files that include interviews with veterans from the Imperial War Museum, in the UK, and articles contributed by the general public. Rescued by Veritas Raymaker (Dr. Kenneth Y T Lim in the atomic world), who bought the sim when the University of Oxford left SL, The Western Front exhibition maintains its original content and its spirit, allowing us to have contact with items from the Digital Archive in context, i.e., in a simulated war trench that help us understand better what that material refers to. There are stills, videos and some impressive interviews with war veterans describing training in trench constructions, the risk posed by mustard gas, food issues and aspects related to injured soldiers, among other experiences.

The Western Front, 1917, in SL: “Destruction came from the skies”

The events of that day were described as if they had never stopped being lived. “Destruction came from the skies, the airplanes sound was terrifying. The dream of progress did not bring us welfare, it helped us kill each other in larger numbers. The horror was everywhere. Shell shock too, it was not uncommon at all – we were exhausted. I shouted once, he did not hear. I thought of shouting his name again, but the word never came out of my mouth. Then I saw him running towards the biggest uncertainty of all: no man’s land.”

The experience at The Western Front in SL is richer if one dresses properly  and participates in its atmosphere – at the arrival point, the visitor finds free soldier and nurse uniforms. Right after reading a few texts on the war and the sim itself, one is ready to explore. From time to time, ghost soldiers will appear to share their experiences. Clickable devices delivering movies and sound files complete the sources we can rely on during the simulated exhibition.

The Western Front, 1917, in SL: one’s ghosts always come back

The Western Front, 1917, in SL: the casualty clearing station

The Western Front in SL is both a demonstration of how powerful a simulation like that can be at connecting the visitors with the material that is being exhibited and, at least for me, an experience that, evoking somberness and sorrow, refers to a kind of episode in history that should not be forgotten or repeated. For that reason, Frideswide, in SL since 2009, is definitely a sim to be visited and revisited, and it seems one can continue to spend time there whenever they want, for there is no apparent risk of Frideswide disappearing (following the fate of some other places that once were milestones in SL) in the near future, according to Veritas.

“I searched at the casualty clearing station with no success. I have not seen him again. There is only this dream now, this dream that haunts me: in such a fantasy, I find him alive and stay there until someone else arrives and helps me take him to the doctor. Then I wake up and realize he has never completed the crossing. I have not seen the body, but I know. Now the war is over. Will it ever end?” 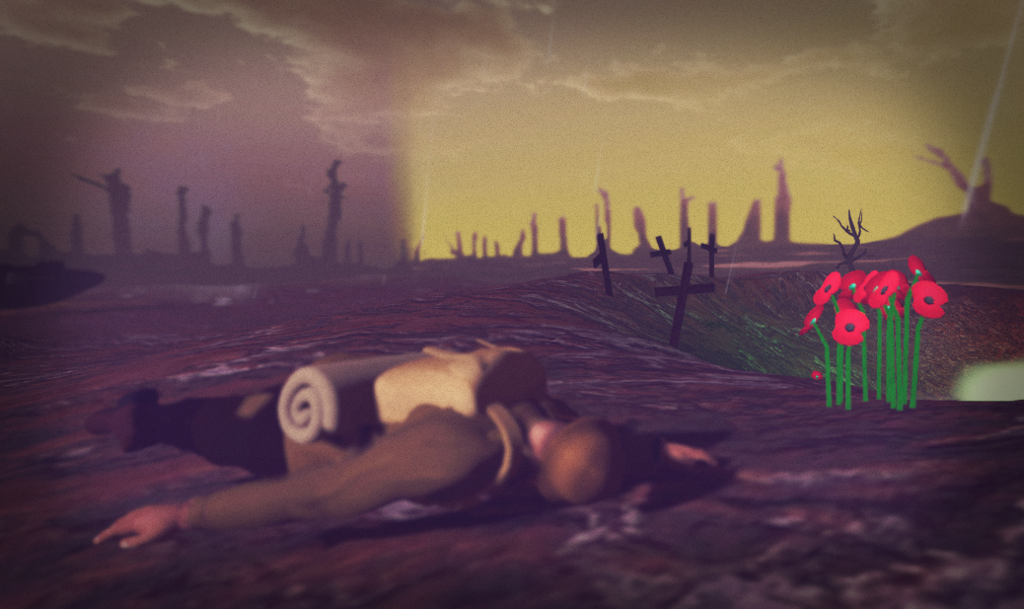 *The excerpts in italic are purely fictional. They are inspired by ideas and feelings that The Western Front in SL evokes in me. I decided not to transcribe the original interviews that can be heard at the sim, since, on the one hand, they can be found on The First World War Poetry Digital Archive website and, on the other hand, they can be even more powerfully experienced at Frideswide. So, for those who have not heard them, I thought it was better not to preview them here.