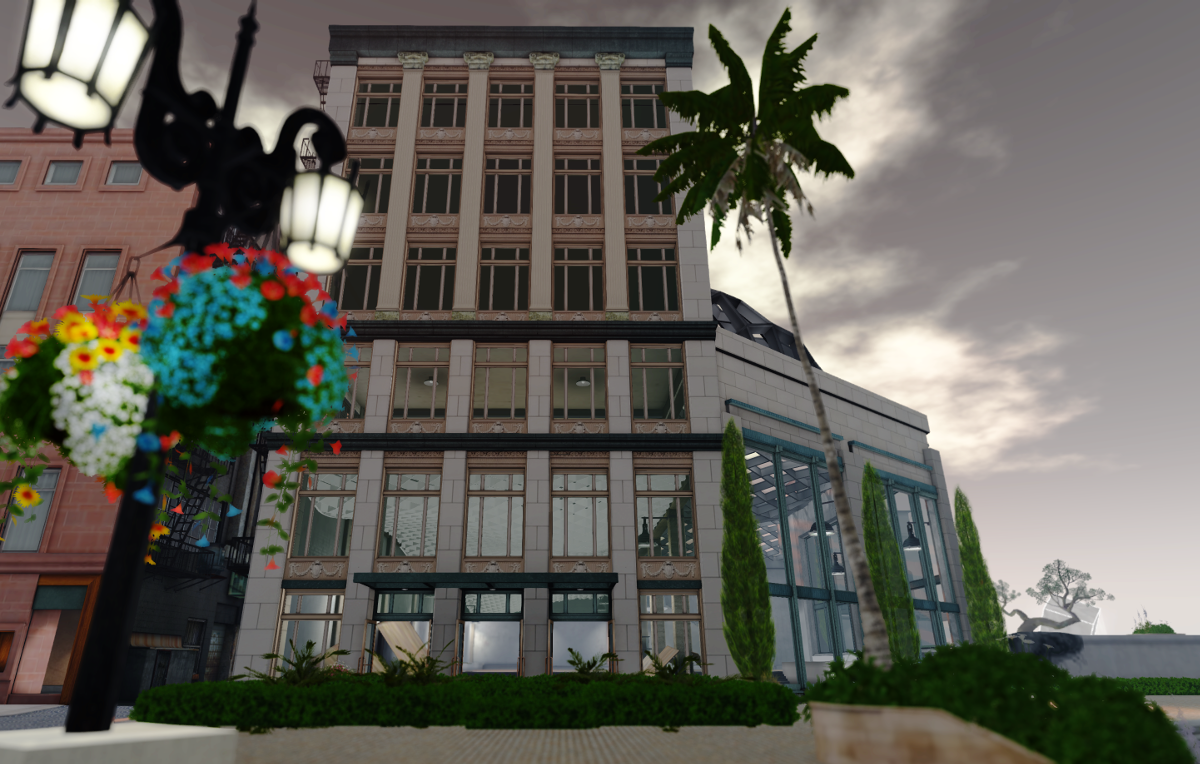 Virtual store built by Loz Hyde: a more contemporary part was added on the right side of the traditional structure

In what we are used to calling real life, the choice between conservation of past-time architecture and the replacement of old buildings by new structures often represents a dilemma in an ever-changing world where new necessities recurrently clash with tradition. One of the responses to such a challenge is the intervention on historic buildings in order to add new spaces to them and adapt their general configuration to the new uses that we may require. It surely makes sense in many cases, in the atomic world. Nonetheless, it is surprising to find a “modified building” in a virtual world, where the problem of conservation doesn’t really occur – at least not in the same way. In Second Life, I’ve recently spotted a construction like that at Meshworx, the store by well-known 3D designer Loz Hyde. 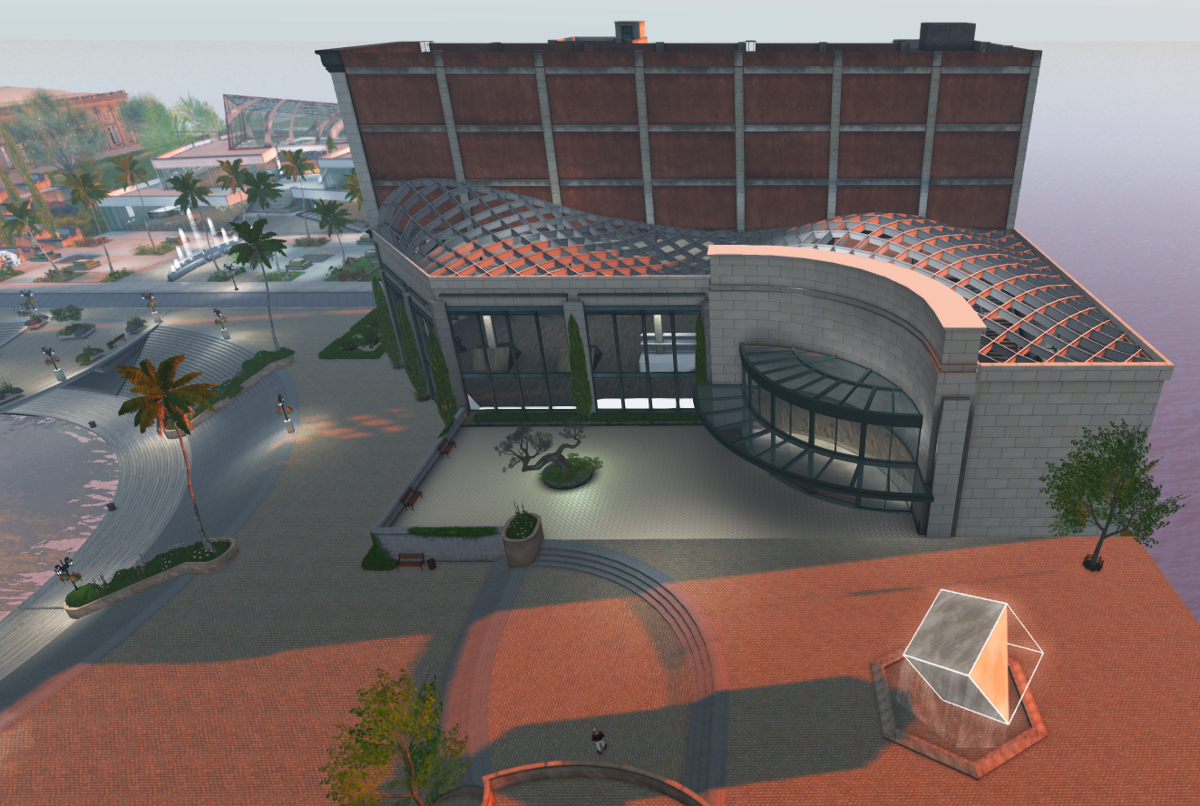 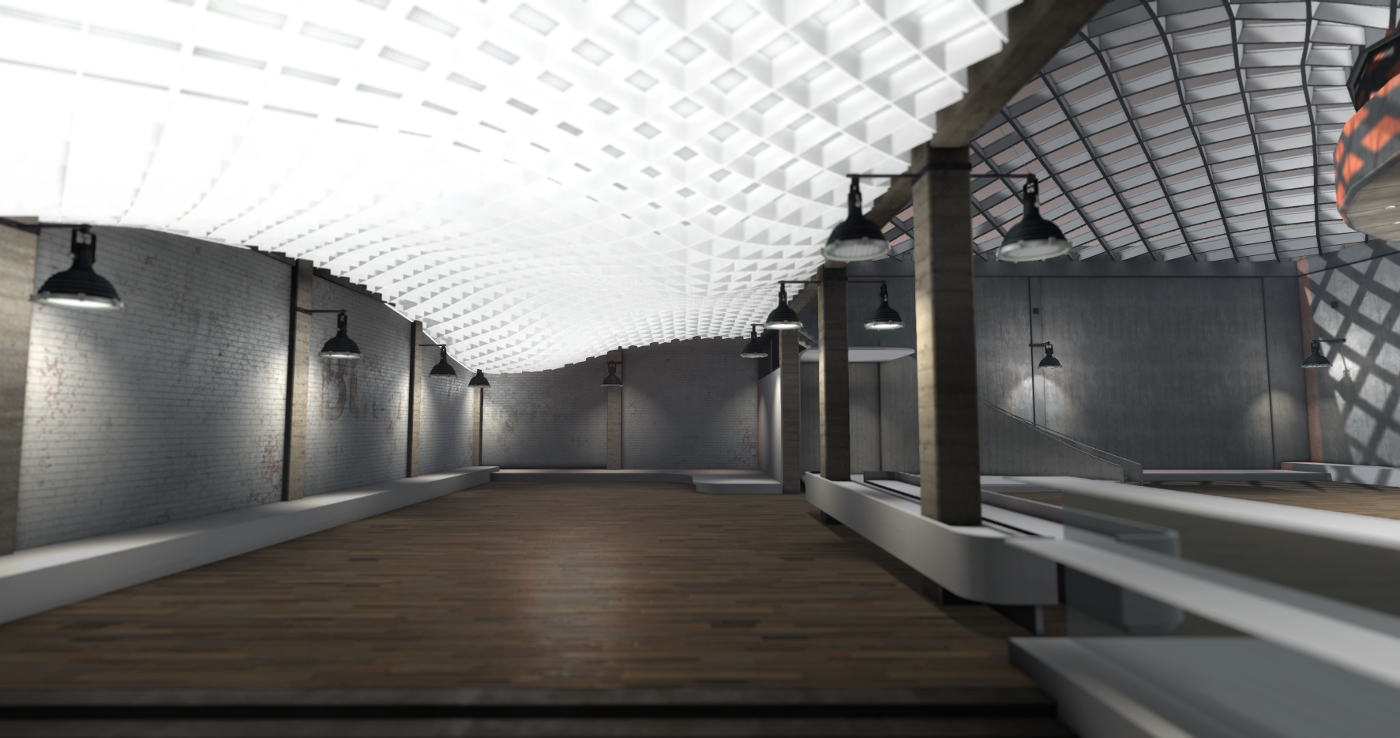 The tessellated roof and ceiling on the first floor 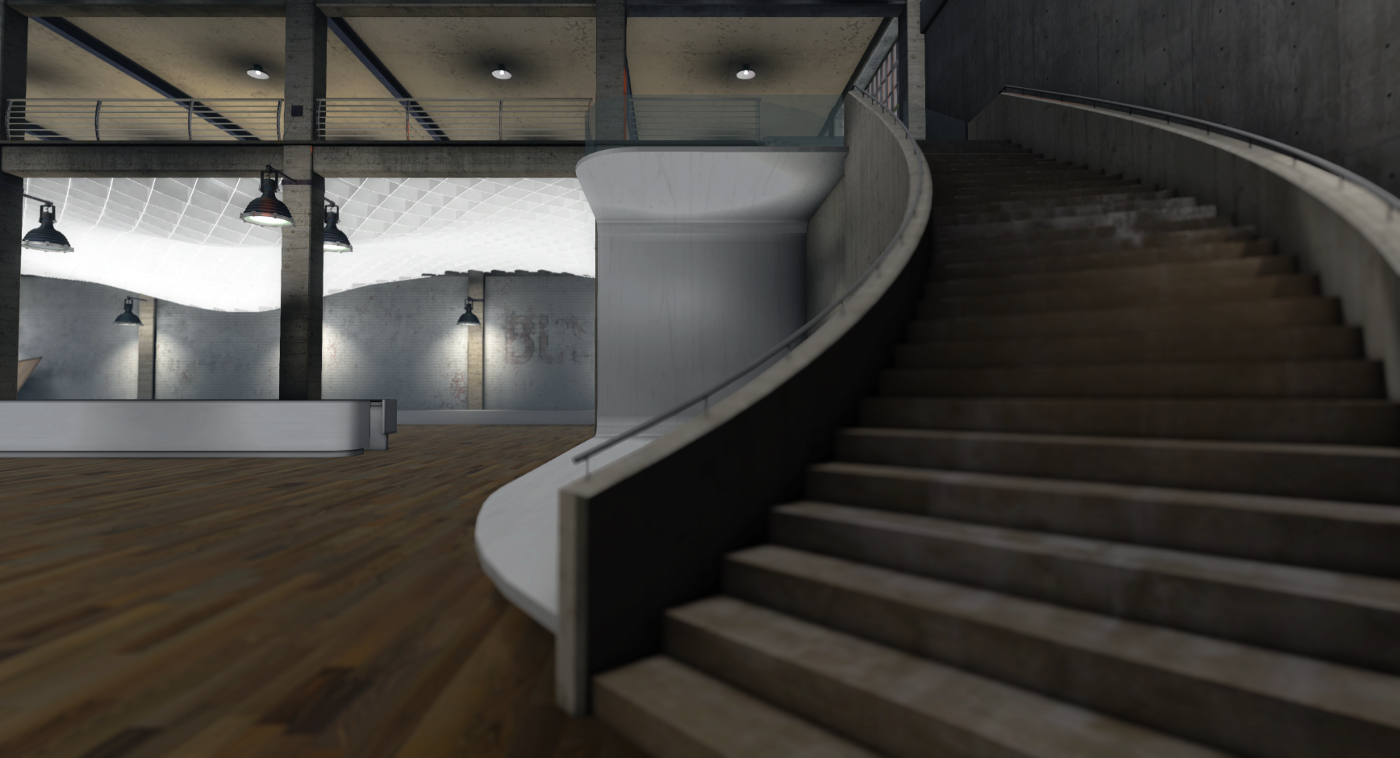 Stairway to the second floor

Loz’s creation dates back to 2013 and seems planned to be a store. It could be described as a building that looks like an early 20th century one with a contemporary addition that inspires some post-modern and parametric or neo-futuristic feelings. The interior shows integration between its different parts. On the first floor, the tessellated roof and ceiling helps to unite the old and new areas.

The second floor shows more of the old building, the transition made smooth by the stairway and a glass structure on the top of it. Once one is upstairs, the contrast with the new part is rather interesting, not shocking at all.

What’s curious about Loz’s building is that the old-looking building is not, actually, prior to the contemporary addition. There was no prior historic building to which one needed to add a new space: both parts were conceived to match each other and were rezzed together. Even if Loz based the more traditional structure on a previous model that he had, there was no need to do any kind of new intervention on it in order to adapt it to new requirements and preserve it from being, let’s say, demolished. 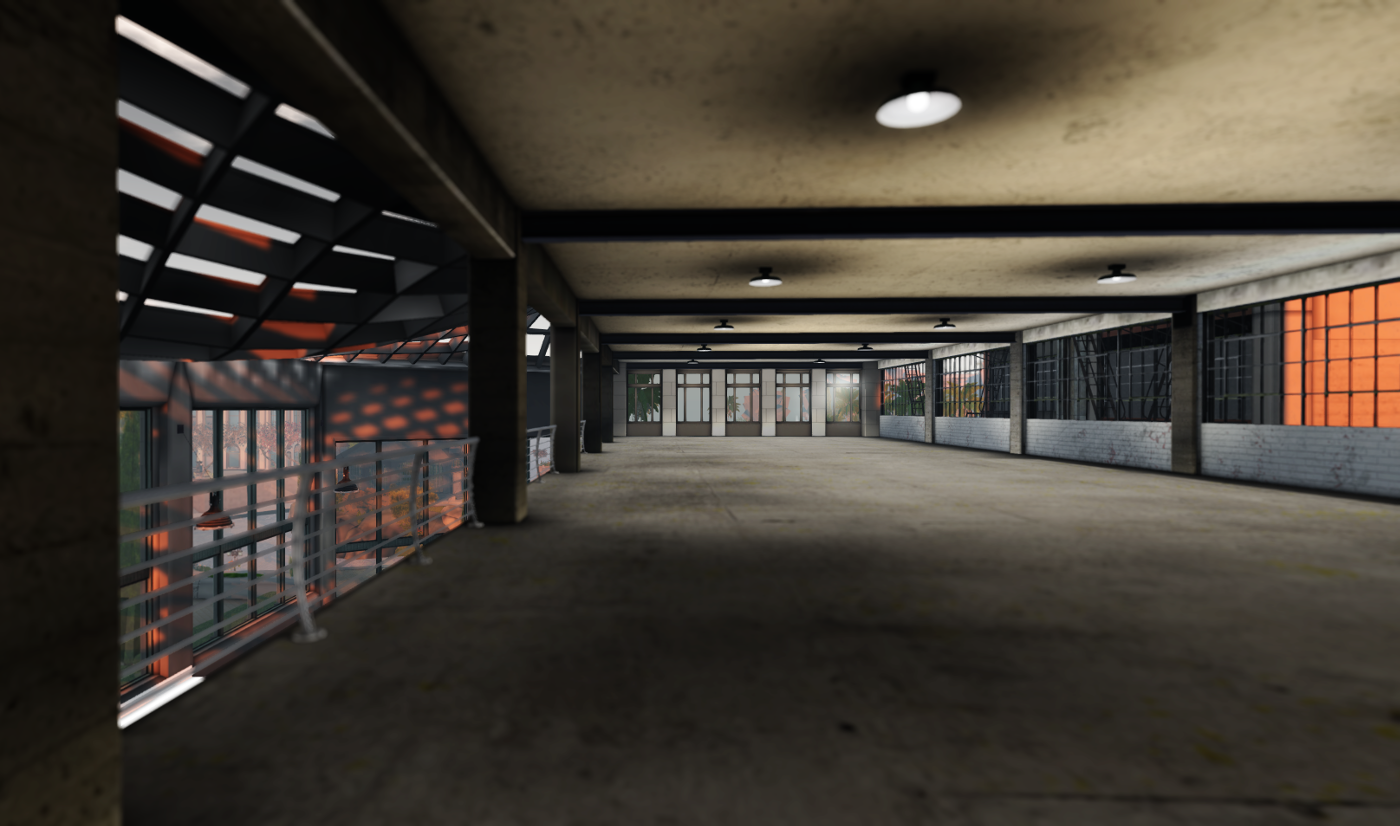 In the tangible reality, some people argue that, in many cases, the reason to preserve a certain building is not related to its functionality, especially when new uses are planned to it. Sometimes, economic considerations may justify the idea of keeping it instead of demolishing it to give path to a new structure, more adapted to the current requirements. In certain circumstances, then, contemporary adaptations and additions could be a good and cheaper solution to update older constructions. Nonetheless, there are contexts in which those additions can be even more costly than building something from scratch. Still, preservation and adaptation may be chosen instead of demolition, even in scenarios in which economy doesn’t support such an option. What could be the reason for that? 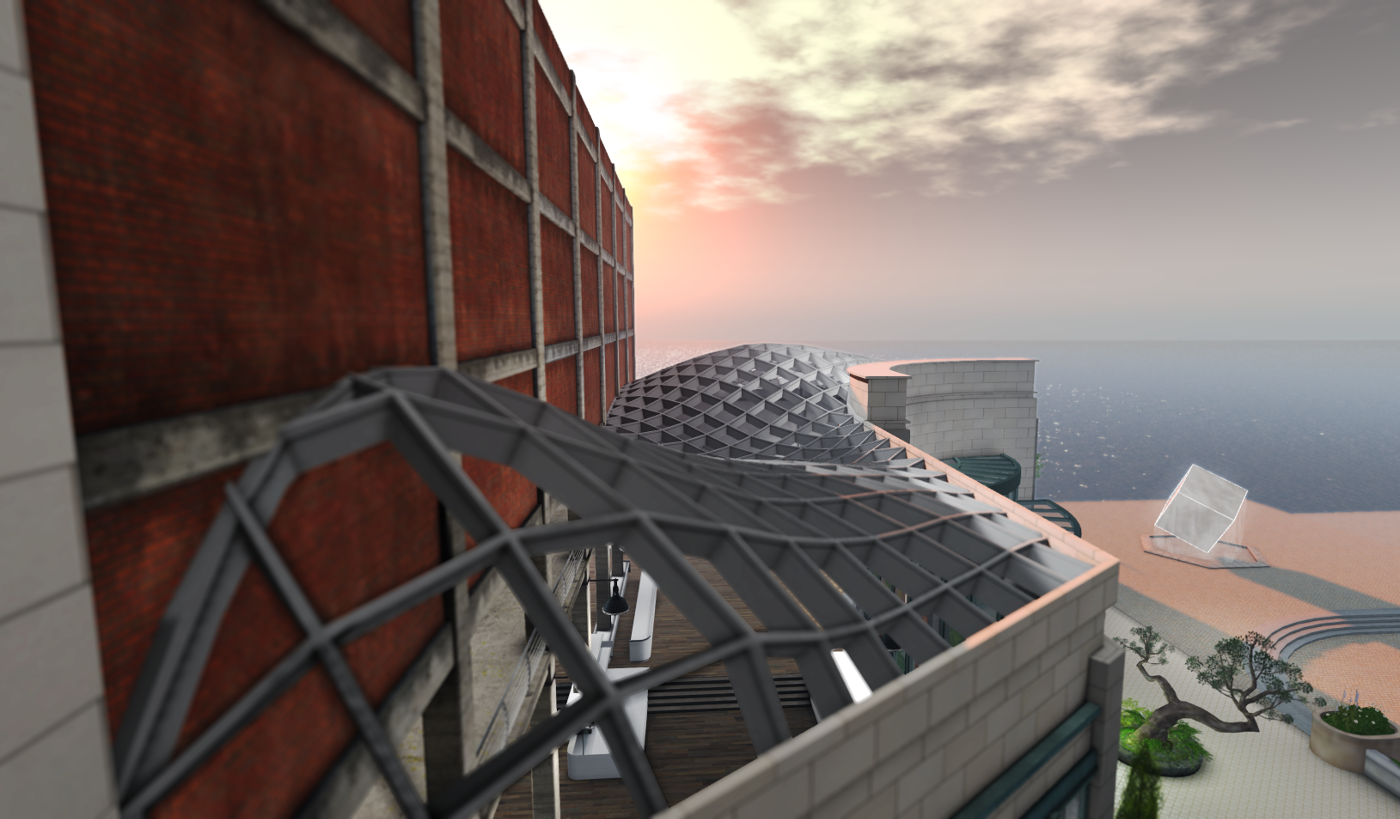 The tessellated roof on the contemporary part of the building

The answer seems to be the claim for the preservation not just of a building, but of history, understood as a certain narrative of the past considered to be our heritage, what we inherit from those who came before us, elements that establish some continuity throughout time and, then, that help us establish an idea of a more or less stable identity – not an individual identity, but a collective, social one. (Of course, the past to be preserved is not the whole past, but a chosen one, and that choice may be subject of a dispute among different groups, for it not only helps to create a certain narrative, but also to erase other possible accounts). 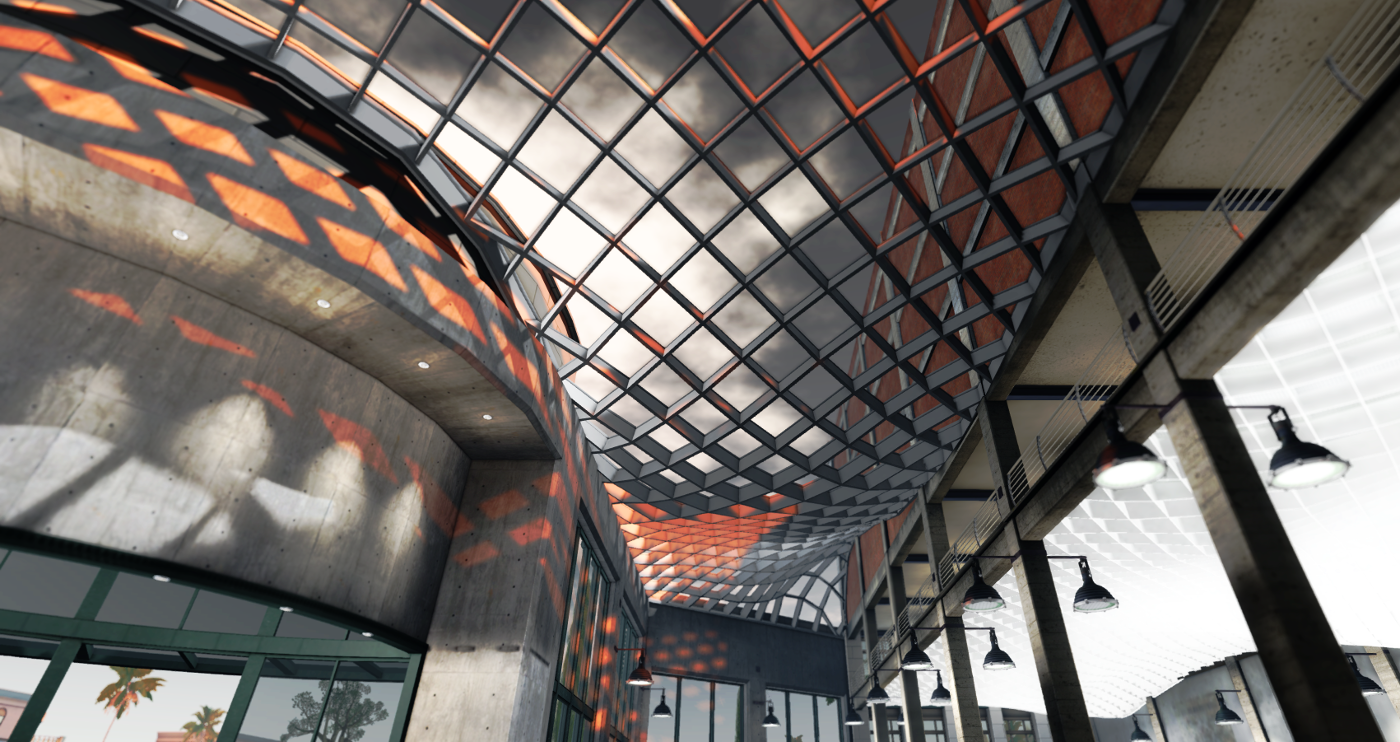 The roof allows one to see the sky through it

Second Life also has its own past, and parts of it have been preserved, both by Linden Lab and by individual residents or groups of residents, in places such as Da Boom or Svarga, in constructions or installations like The Man, The Far Away or The Western Front – 1917, among others. But that’s not the case of the of Loz’s building: it is not a reminiscence of SL’s past that has been transformed and preserved the same way that those other examples that I have mentioned. 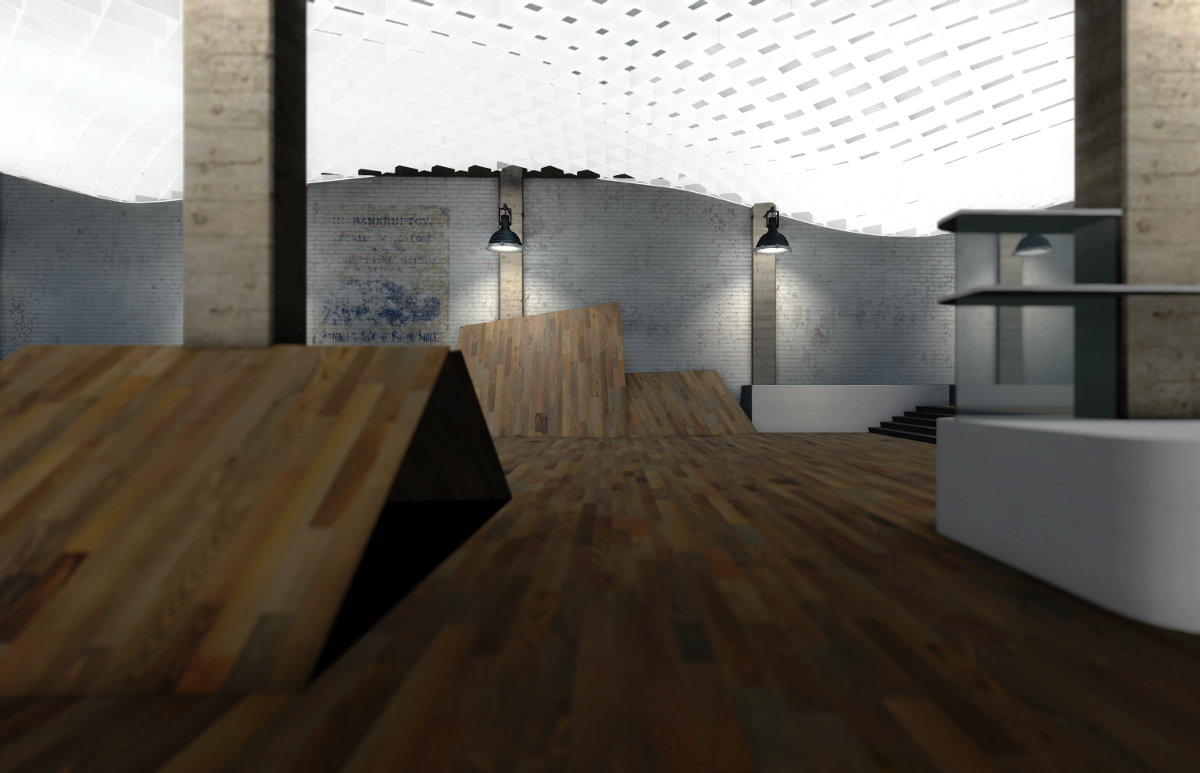 Loz’s building: detail of the floor and the ceiling 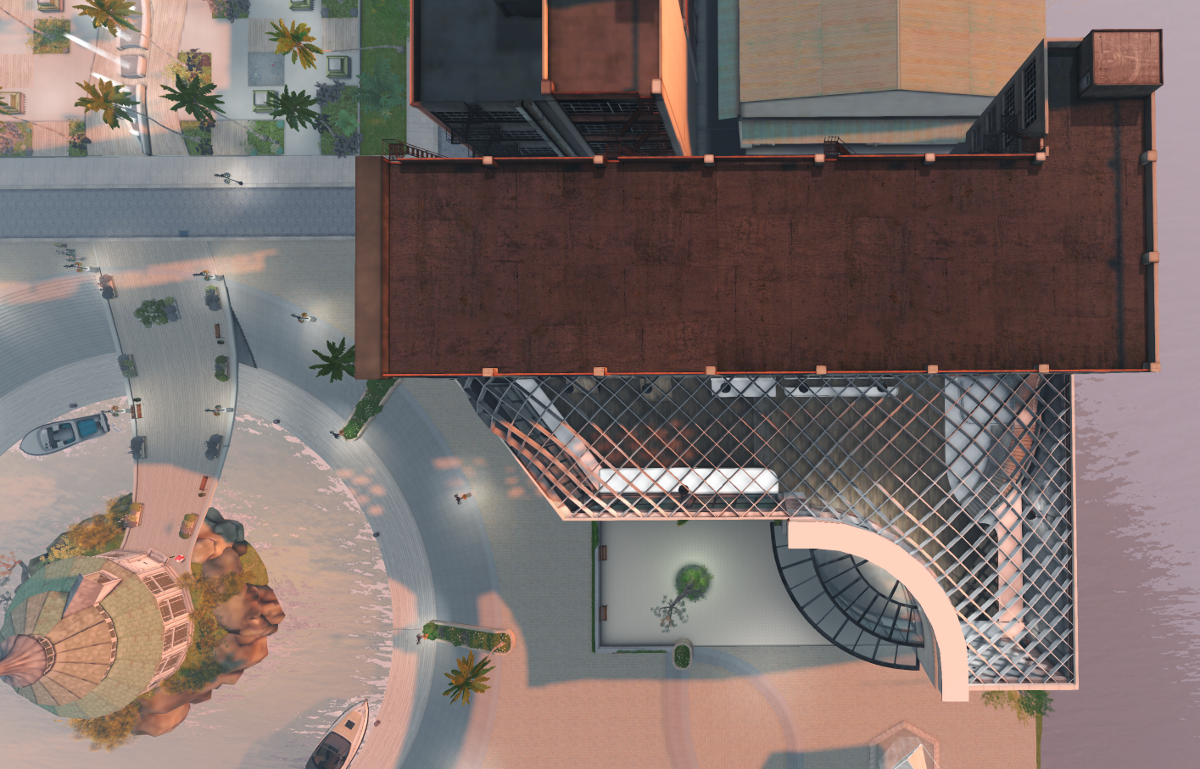 Loz’s structure seen from above

What Loz’s building does is what, in essence, SL and virtual worlds do all the time: it simulates. In Second Life, we see that everywhere: sims that simulate idyllic beaches, avatars that simulate animals, different amounts of code that simulate physics and so on. In a more specific classification, we could inscribe the building by Loz in a series of elements that simulate history and which could include from role-playing regions designed, let’s say, as Ancient Rome or Berlin in the 1930s up to clothes that replicate Medieval attires.

Even more specifically, by mixing old and new styles in architecture, Loz’s creation simulates the passing of time. In that sense, it’s different from a building that simply looks like a 13th century castle. By comparison, it has more to do with virtual ruins or virtual weathered constructions that also refer to the idea of some lapse of time. But it does so, not by having a decayed looking – quite the opposite, it looks elegantly renovated. The strategy employed in it was to establish a link between a simulated past and a simulated present: an old-like and a contemporary-like architecture at once.

It’s curious that I haven’t noticed many other examples in SL of the same idea that Loz put in practice in that building of his. Certainly, that’s a powerful and interesting way to simulate history and the passing of time. Maybe there are many other examples out there and I haven’t paid enough attention to them? Or haven’t I been looking at the right places?

4 thoughts on “Old and new: a building that simulates time passing”