“Death is always on the way, but the fact that you don’t know when it will arrive seems to take away from the finiteness of life. It’s that terrible precision that we hate so much. But because we don’t know, we get to think of life as an inexhaustible well. Yet everything happens a certain number of times, and a very small number, really. How many more times will you remember a certain afternoon of your childhood, some afternoon that’s so deeply a part of your being that you can’t even conceive of your life without it? Perhaps four or five times more. Perhaps not even. How many more times will you watch the full moon rise? Perhaps twenty. And yet it all seems limitless.” (Paul Bowles, The Sheltering Sky)

A core motif in Paul Bowles’ novel The Sheltering Sky, written in 1949, seems to be the distinction between the tourist and the traveler. The former makes an effort to never leave their comfort zone and to actually go nowhere – their displacements are an illusion, meant to confirm their preconceived expectations about what they are going to see and about their own starting point, as if they’d travel only to be able to say that there’s no place like home. The latter, in contrast, embarks on a journey, tries to embrace the unknown, as someone who risks losing themselves in the way. As Tennessee Williams underlined, when writing about Bowles’ book, “the chief male character, Port Moresby, […] is a member of the New York intelligentsia who became weary of being such a member and set out to escape it in remote places. Escape it he certainly does. He escapes practically all the appurtenances of civilized modern life. Balanced between fascination and dread, he goes deeper and deeper into this dreamlike ‘awayness'”. And, to a great extent, this is what happens, as well, to Port’s wife, Kit, the main female character in the novel. 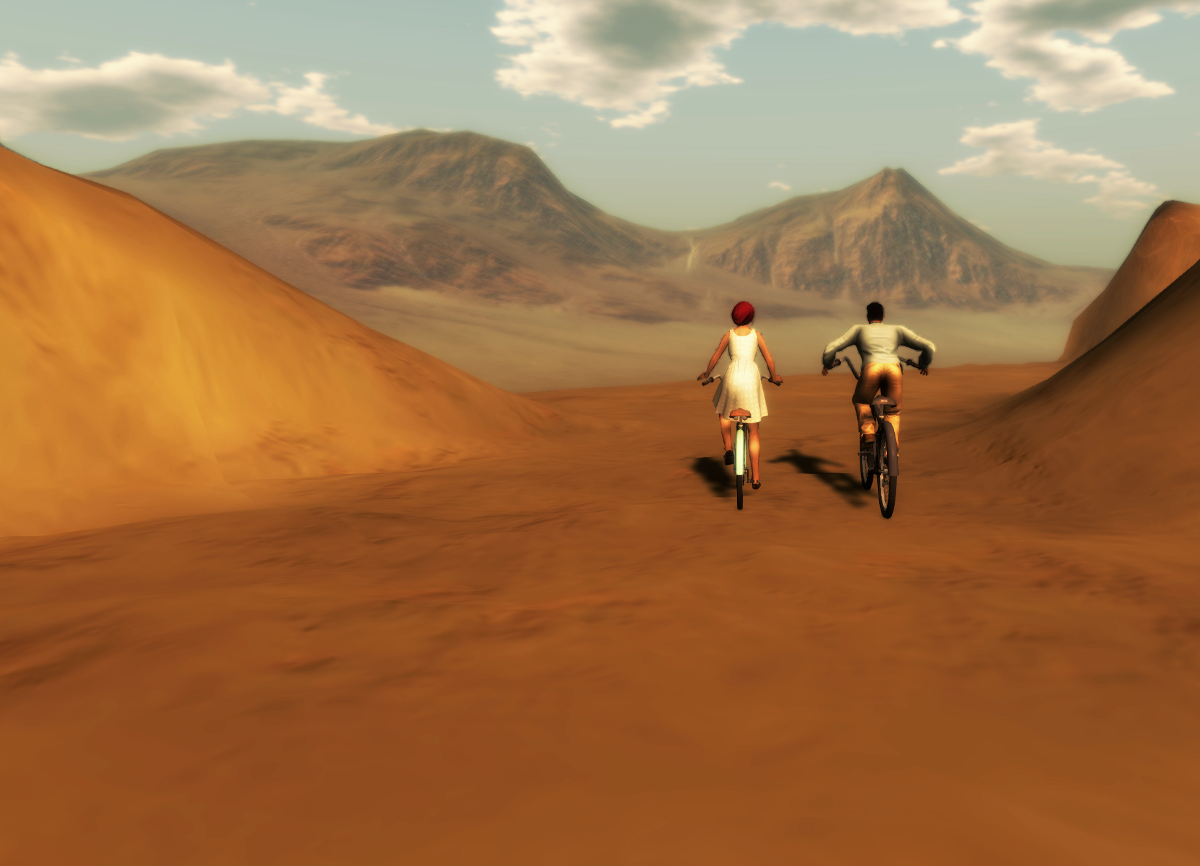 A ride in the desert (with Nikolai Warden; taken at Klima, Oasis of Farad – Home to the Great Caravans, a sim which is still under construction).

In Bernardo Bertolucci’s adaptation of the novel to the big screens, the difference between the tourist and the traveler, brilliantly described by Bowles in his text, is translated into a very interesting dialog involving Port, Kit and their friend George Tunner, as they arrive in Tangier a couple of years after World War II:

Port Moresby: Well, terra firma.
Tunner: We’re probably the first tourists they’ve had since the war.
Kit Moresby: Tunner, we’re not tourists. We’re travelers.
Tunner: Oh, what’s the difference?
Port Moresby: A tourist is someone who thinks about going home the moment they arrive, Tunner.
Kit Moresby: Whereas a traveler might not come back at all.
Tunner: You mean *I’m* a tourist.
Kit Moresby: Yes, Tunner. And I’m half and half. 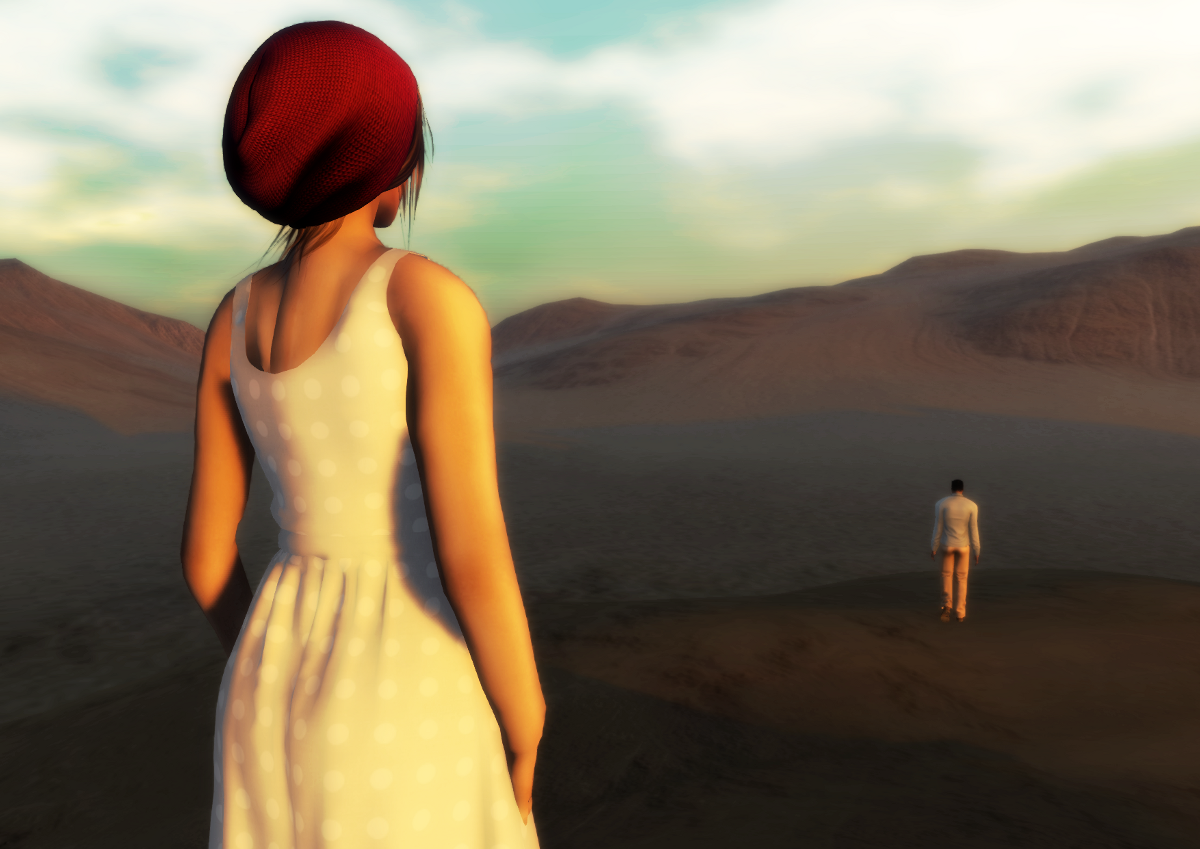 On the hill (with Nikolai Warden; taken at Klima, Oasis of Farad – Home to the Great Caravans, a sim which is still under construction).

The pics you see on this post, some with the kind participation of Nikolai Warden (many thanks to Bock McMillan for putting us in contact) and Randy Firebrand, are a tribute to The Sheltering Sky – both the movie and the book – and a point of departure for a reflection on the ways I’ve been following in my virtual existence. Although this blog is not intended to be a personal diary – my life is not that interesting to share with others and I would soon have no readers if I did share it – I started writing here also as a way to recover and renew the spirit with which I first joined Second Life: the one of discovering people and places, of exploring and allowing myself to be surprised by the wonders I would inevitably stumble upon. 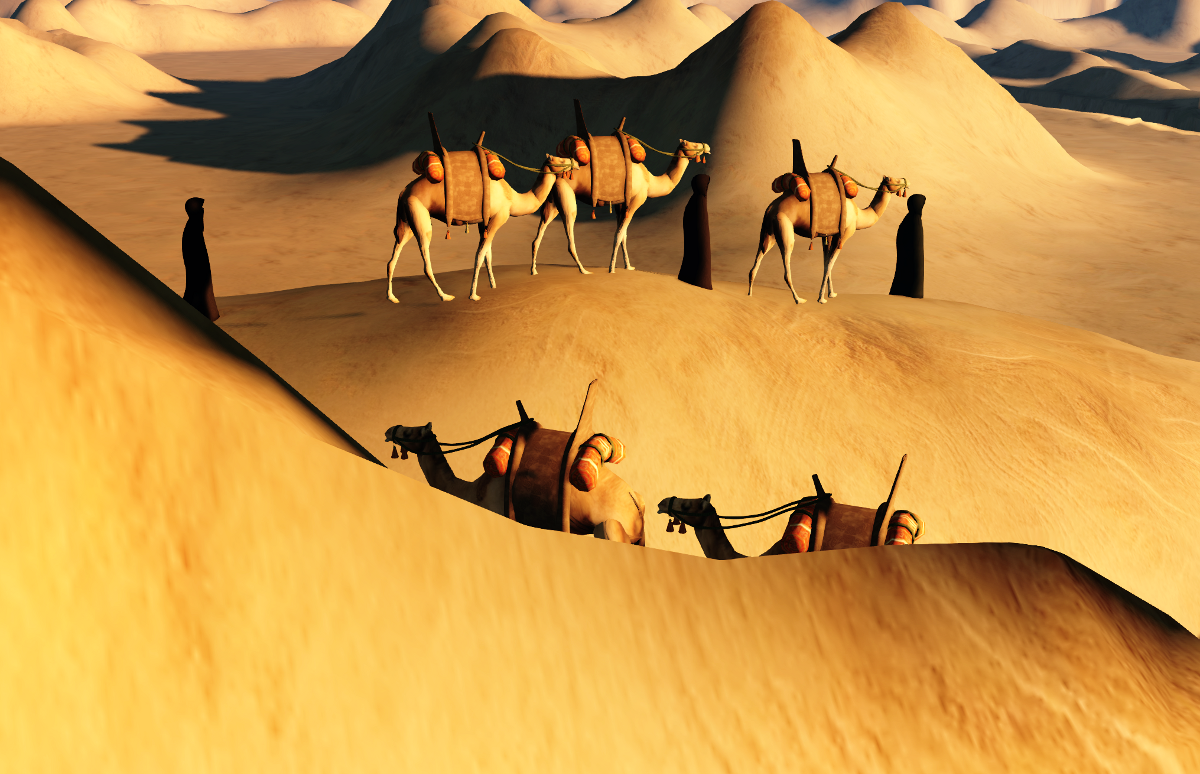 Caravan in the desert (taken at Klima, Oasis of Farad – Home to the Great Caravans, a sim which is still under construction).

This blog is, then, a consequence of my journey in SL – and, at the same time, it is part of that journey, for writing here means to revisit the active experiences I had in Second Life and to deliver them to myself and to my readers as other experiences, more reflective, yet as powerful as the first ones.

After all, this is what the pixel-based world means to me (as I have stated before, in previous posts): a way to expand our boundaries, a country, or actually many different countries, in which we can all become travelers, or at least “half and half”. 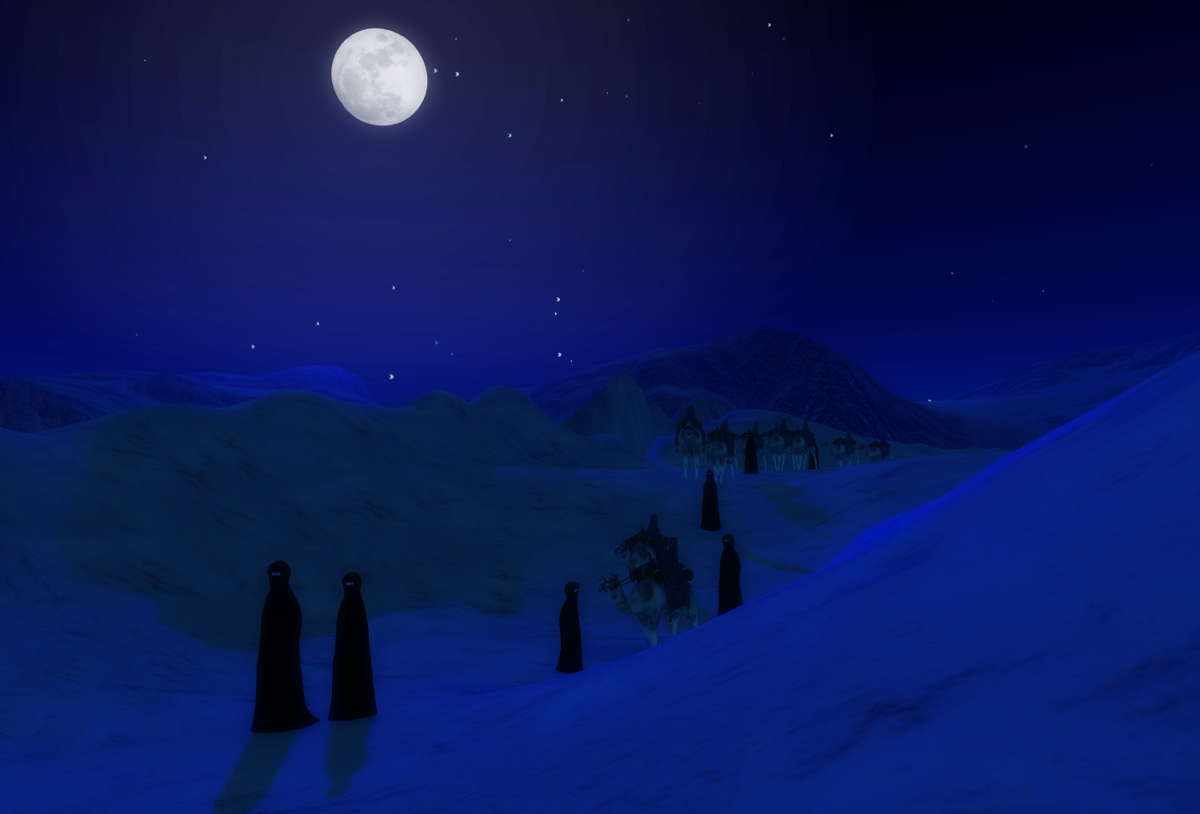 Caravan at night (taken at Klima, Oasis of Farad – Home to the Great Caravans, a sim which is still under construction).

Certainly, there are other ways to experience SL. One can join Second Life as a tourist, who is determined to only meet their own expectations, avoiding surprises and the unfamiliar environments. Nevertheless, my interests go on the opposite way, and that’s why I became an explorer.

In my journey, I’ve found automata, satyrs and centaurs, vampires and lycans. I’ve met horror and terror, I’ve seen the shadows of a war, I’ve been to cute places. I’ve gone exploring with friends (such as here and here), I’ve paid homage to people whom I’ve met and to some I’ve never seen but whom I respect as well. I’ve reached the fourth dimension. 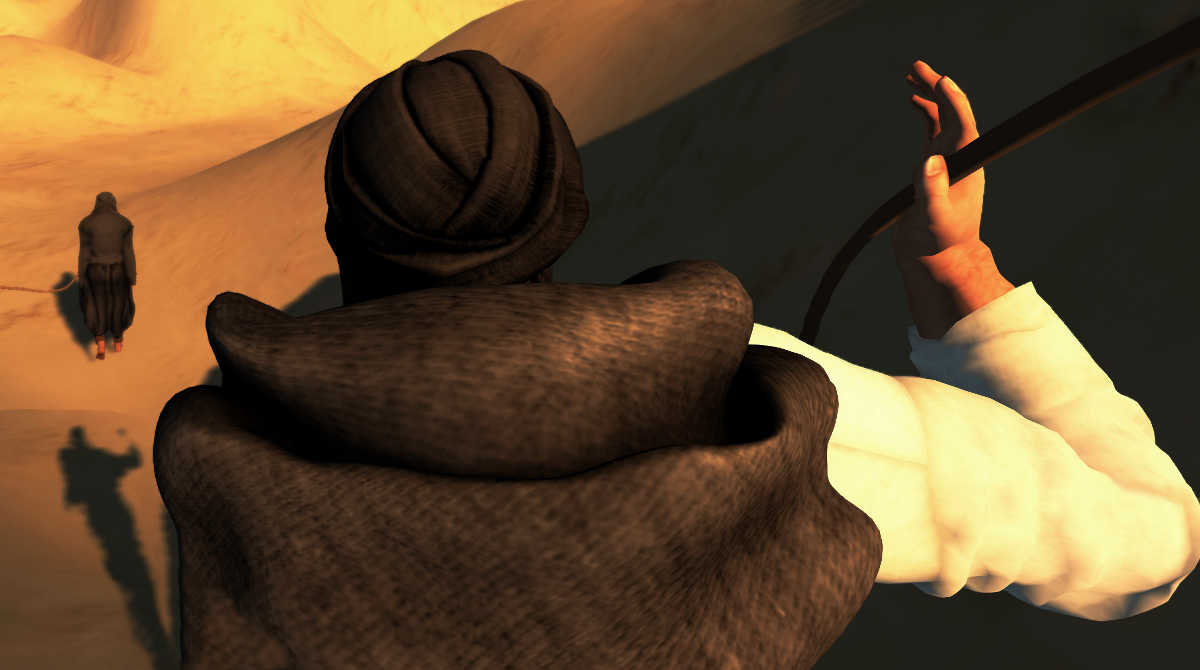 The caravan goes deep into the desert (with Randy Firebrand; taken at Klima, Oasis of Farad – Home to the Great Caravans, a sim which is still under construction).

No doubt, at one point this journey will cease, though my final port is still miles away, I hope. Until then, I will keep traveling – in my time, calmly, trying to fully live the experiences I find on my way. I know it will come to an end. And yet, it seems limitless. 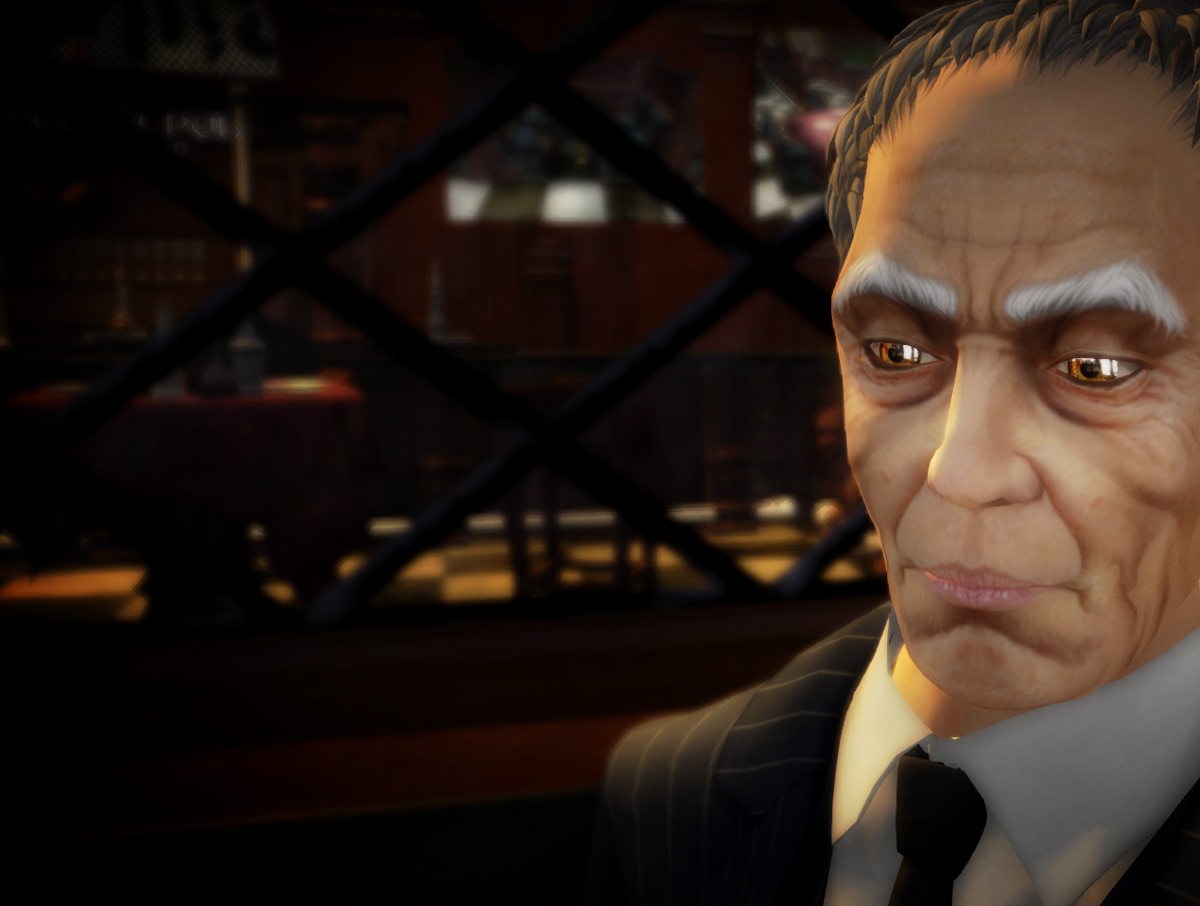 “And yet, it all seems limitless” (taken at Rustica).

11 thoughts on “Under the sheltering sky”