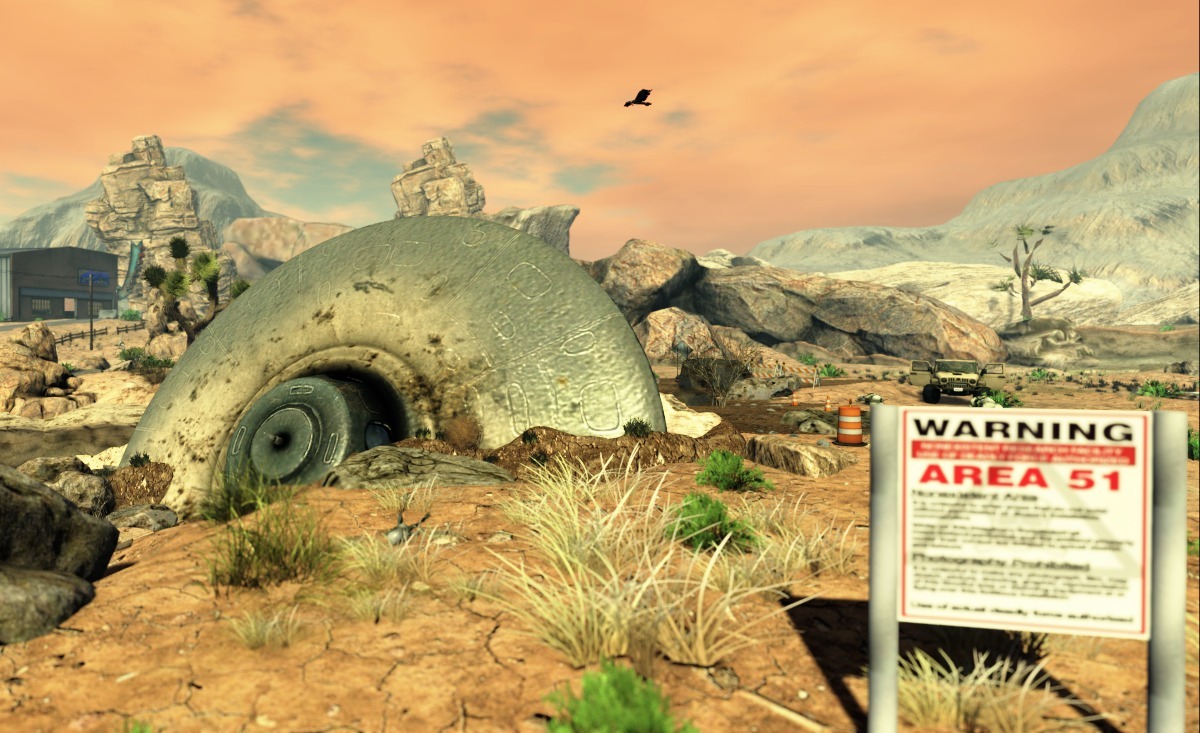 Warning: UFO crash site in Cornhub, a reference to the Roswell Incident

The late 1940s and the 1950s produced a series of sci-fi themes in the United States that have spread and marked our cultural imaginary since then. It’s from those times that the most famous UFO-related case in history emerged: the Roswell Incident, in New Mexico, US, dates back to 1947. That’s the starting point for Cornhub, built in North Korea region, in Second Life. 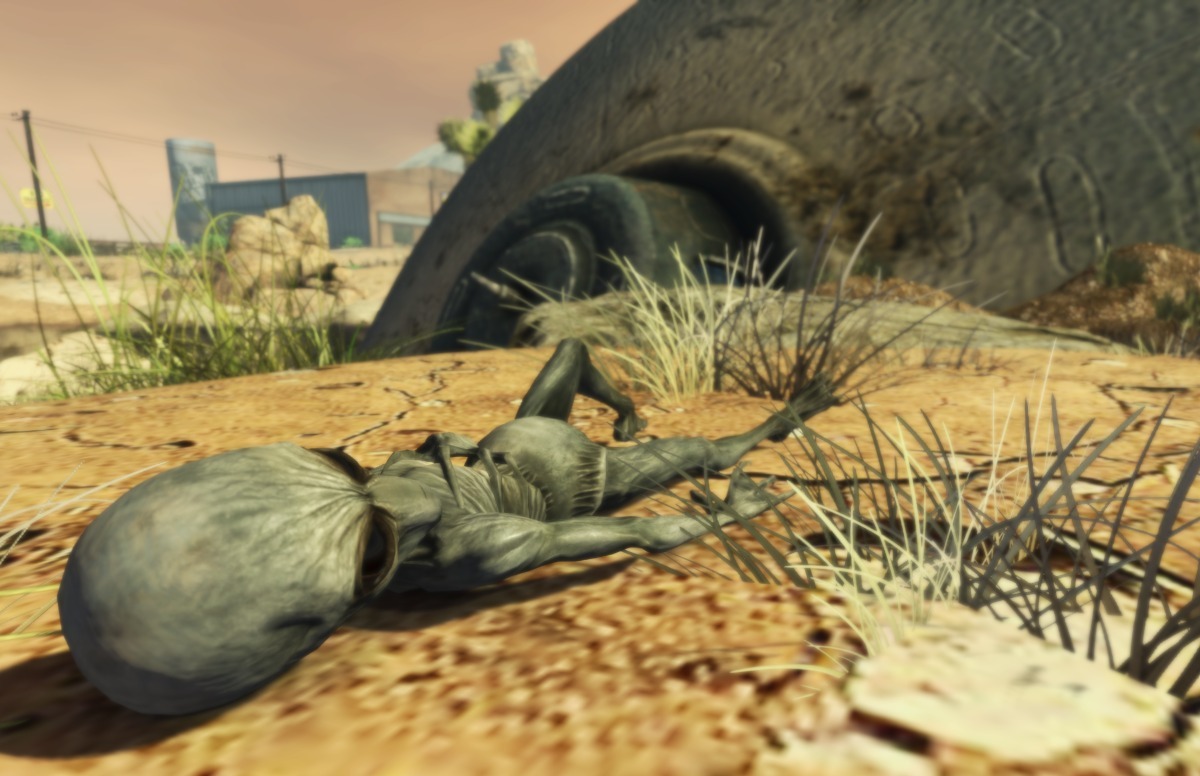 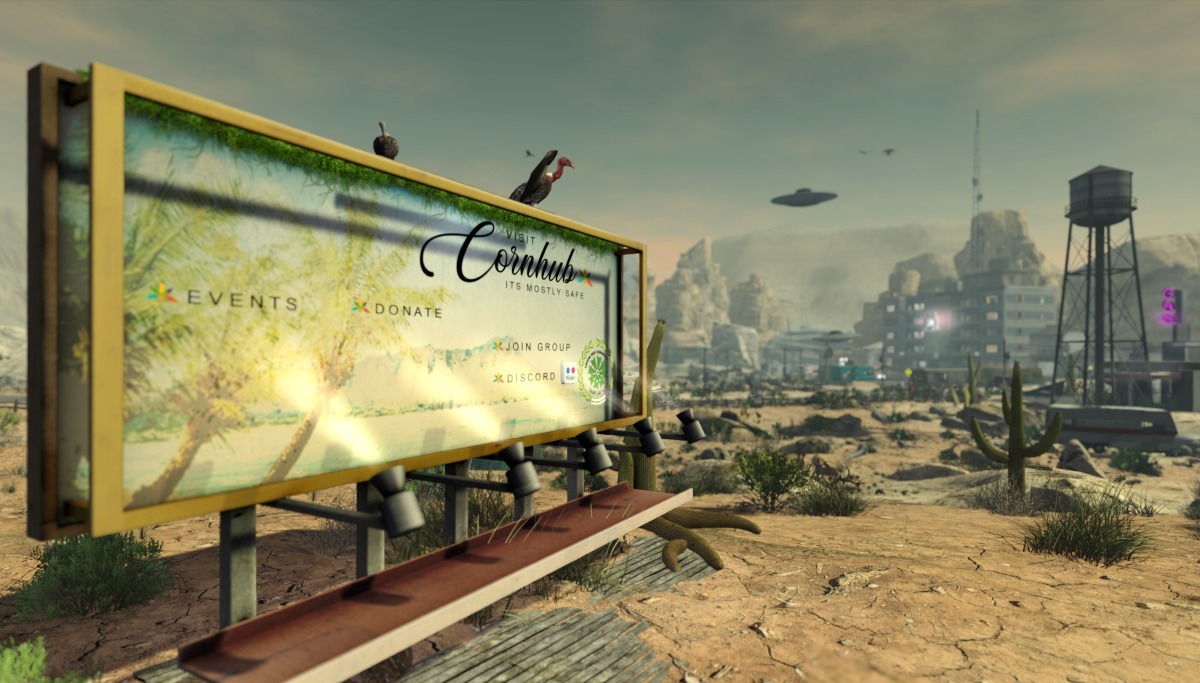 Arriving to Cornhub: a mix of references

The general themes shown in Cornhub are those that have spread throughout the American sci-fi stories of the 1950s, particularly in the movies. After the explosion of the first nuclear bombs in 1945, the post-World War II scenario saw the rise of anxiety related to the possibility of a nuclear apocalypse. Such a possibility was related with the Cold War and the growing dispute between the United States and the Soviet Union. That combination created a cultural environment prone to the development of certain preoccupations as well as some paranoid ideas. 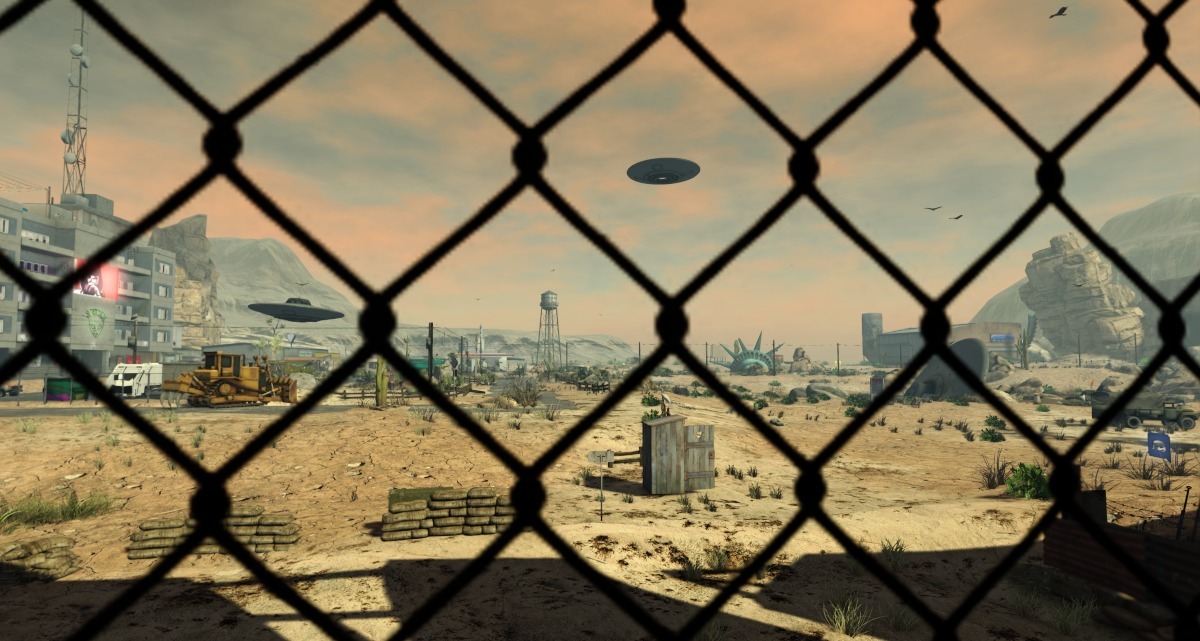 Flying saucers in the sky of Cornhub

Those elements are reflected in some well-known sci-fi movies of the 1950s, which tell us stories about creatures from outer space who come to Earth in order to stop us from developing new weapons of mass destruction, invaders who want to replace the free world by a controlled and automated one, monsters that are revived by atomic tests in the Arctic, mutations… 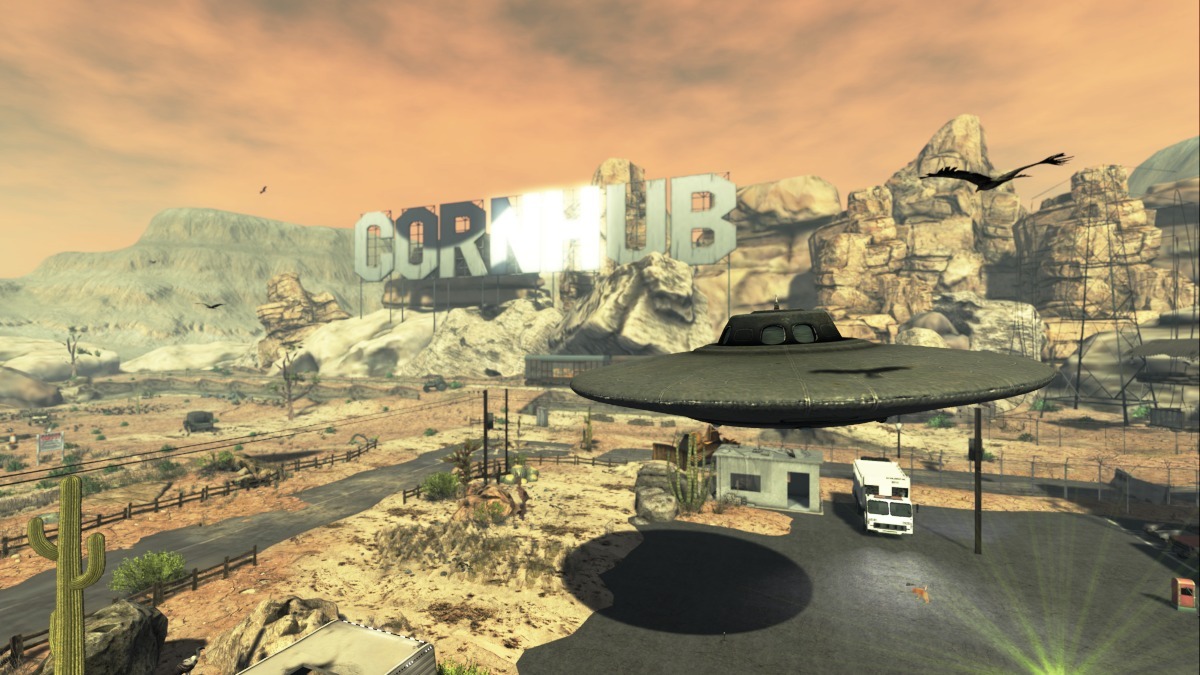 A flying saucer in Cornhub

Aliens are an important feature in many of those stories. The reports of UFO sightings multiplied after WWII, and that echoed in the sci-fi works. In many cases, those unidentified objects, both in the accounts by witnesses and in fictional depictions, were described as round objects (such as in the Kenneth Arnold sighting, an episode in which a private pilot claimed having seen a series of unidentified flying objects in the state of Washington, US, in 1947 – the same year as the Roswell Incident), popularly called flying saucers. That’s exactly how the UFOs are shown in Cornhub. 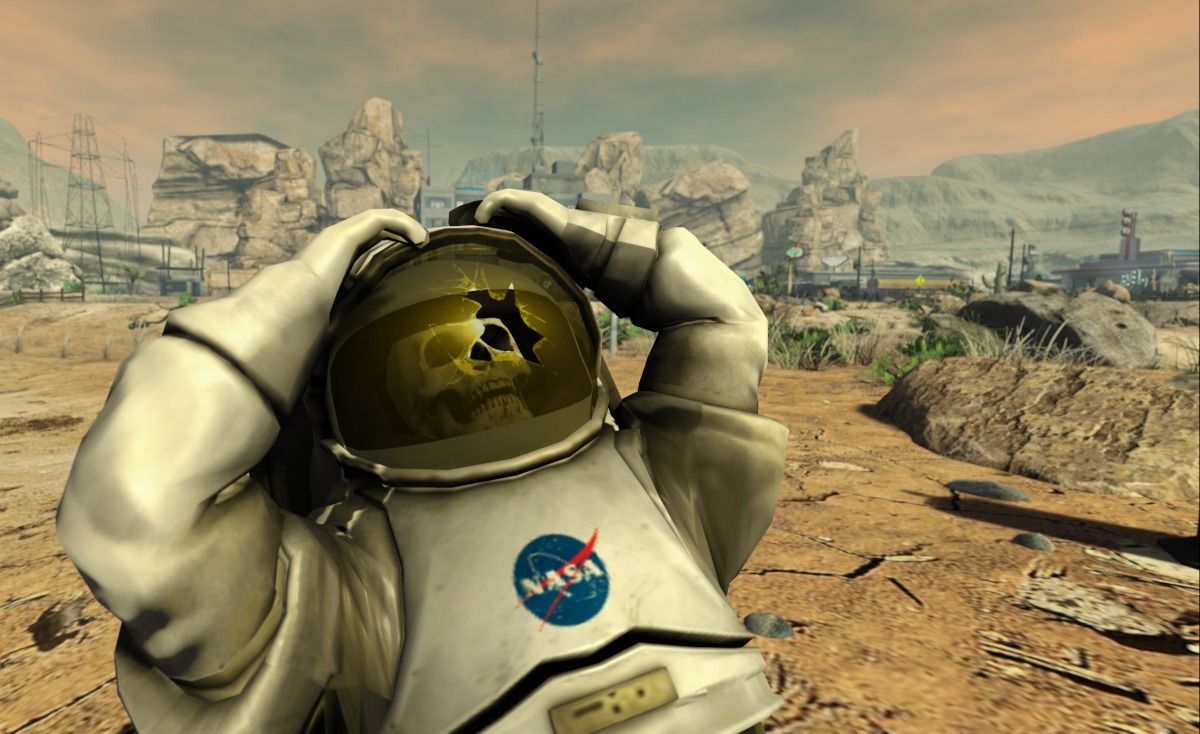 Instant death threatens those who have contact with the scene

Besides the crashed one, there are other flying saucers in Cornhub (observing? Preparing an invasion?). They certainly represent a threat to humans – those who experimented contact with the accident area, and maybe with the dead alien body, have died, most probably for some contamination. 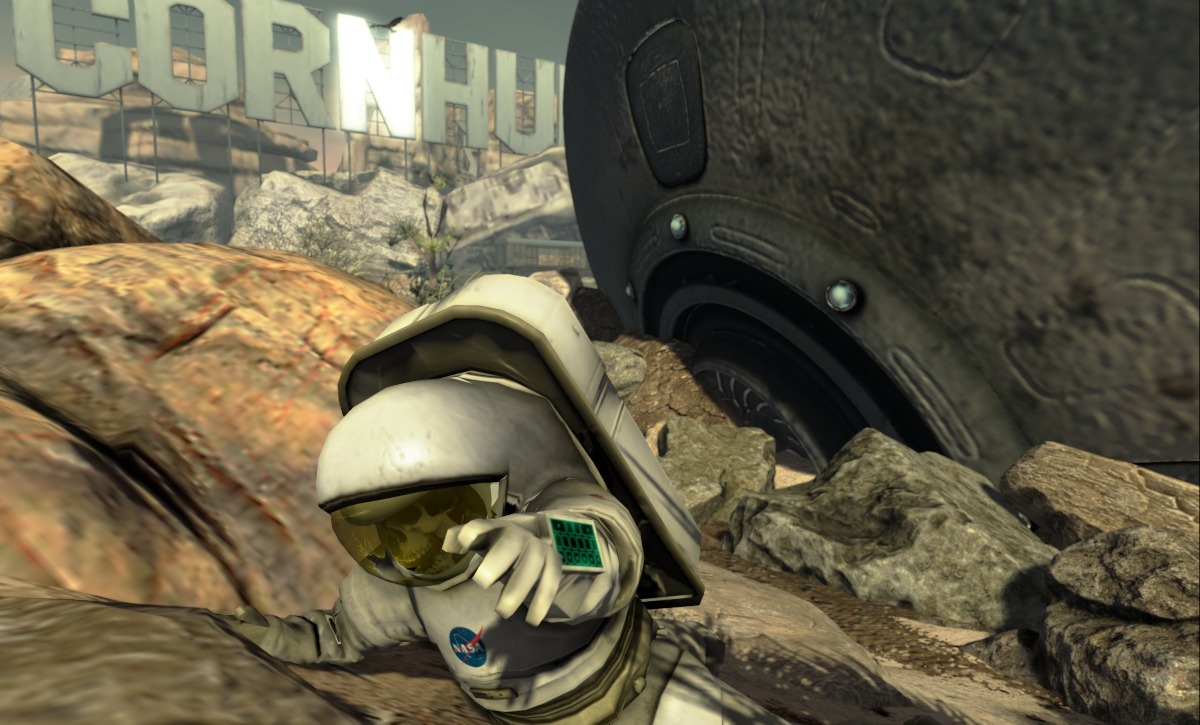 Contamination: they tried to escape 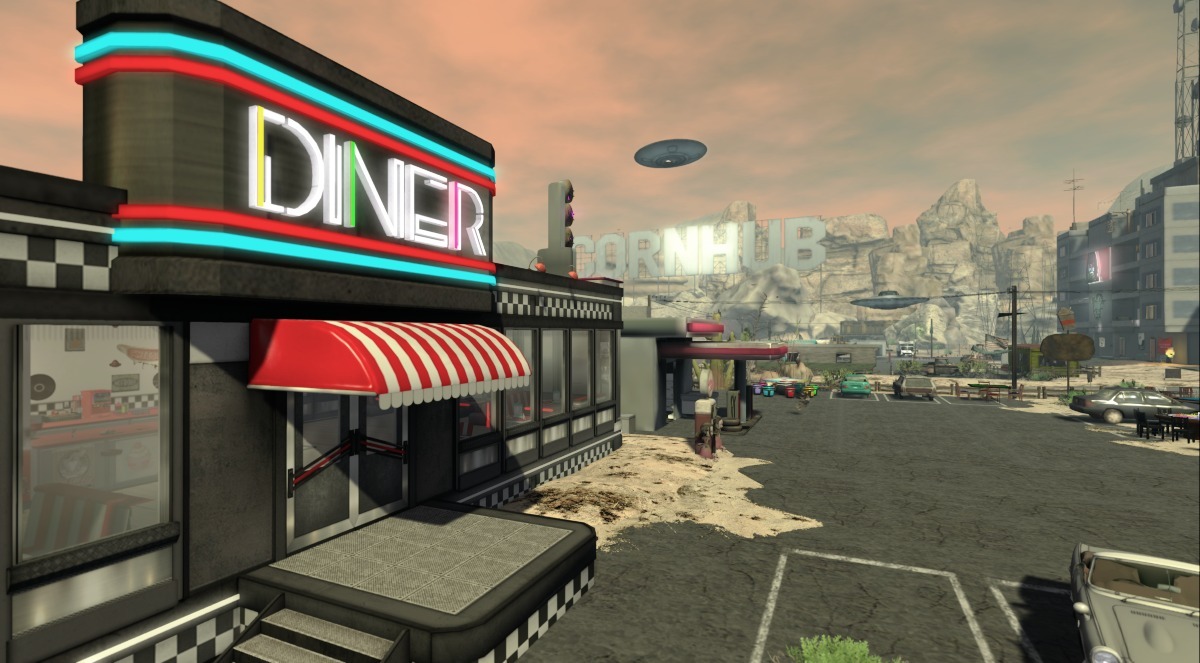 The Diner: a gift from SL’s 16th anniversary 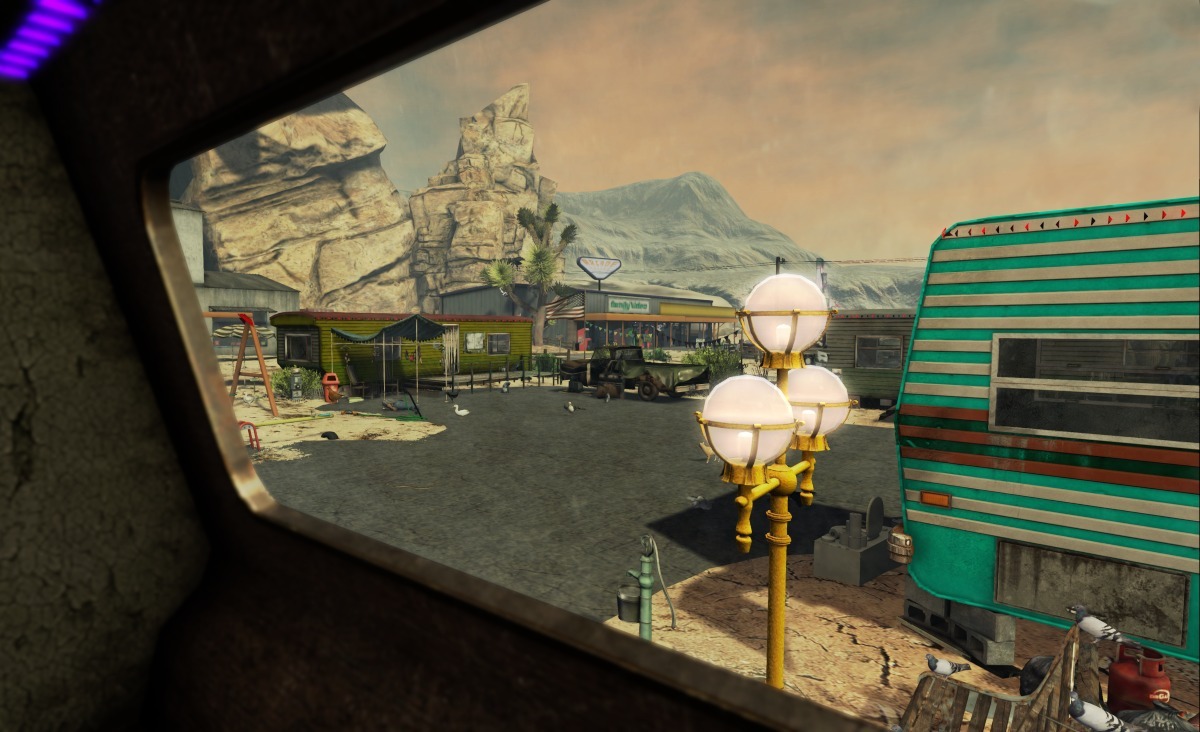 The scene develops in a 1950s (or a late-1940s) environment that includes some art déco buildings and, among them, the Diner that, with its decoration, was part of the gifts given at the recent event that marked Second Life’s 16th anniversary. There’s also a small area with trailer homes (are they becoming a trend in SL?).

There’s no intention, it seems, of making the sim a mirror of any real life reality, if we can say so. The 1950s buildings are shown side by side with elements that would probably fit better another era, or that would just be fiction in any time. That also draws a parallel with the development of the Roswell mythology. 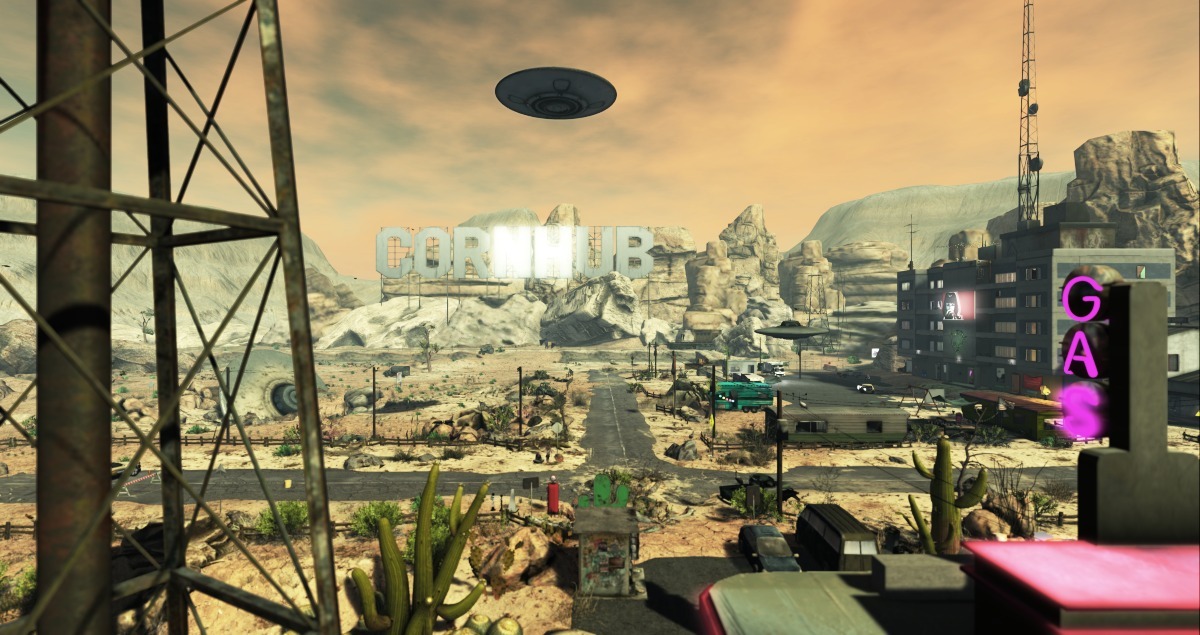 A view of the town

Though the Roswell Incident had an important repercussion on the press at its time, it soon underwent a period of relative latency until it was taken back into light in the 1970s and 1980s. When it reemerged, it was already molded by new layers of “the spirit of time”: in some accounts of the incident, Area 51 started being cited as the place where the debris of the supposedly crashed spaceship – and the alien that would have died in Roswell – were taken to. Such allegation could not exist in 1947 or in the early 1950s, for Area 51 wasn’t established until 1955, and only underwent a major expansion in the late 1950s. 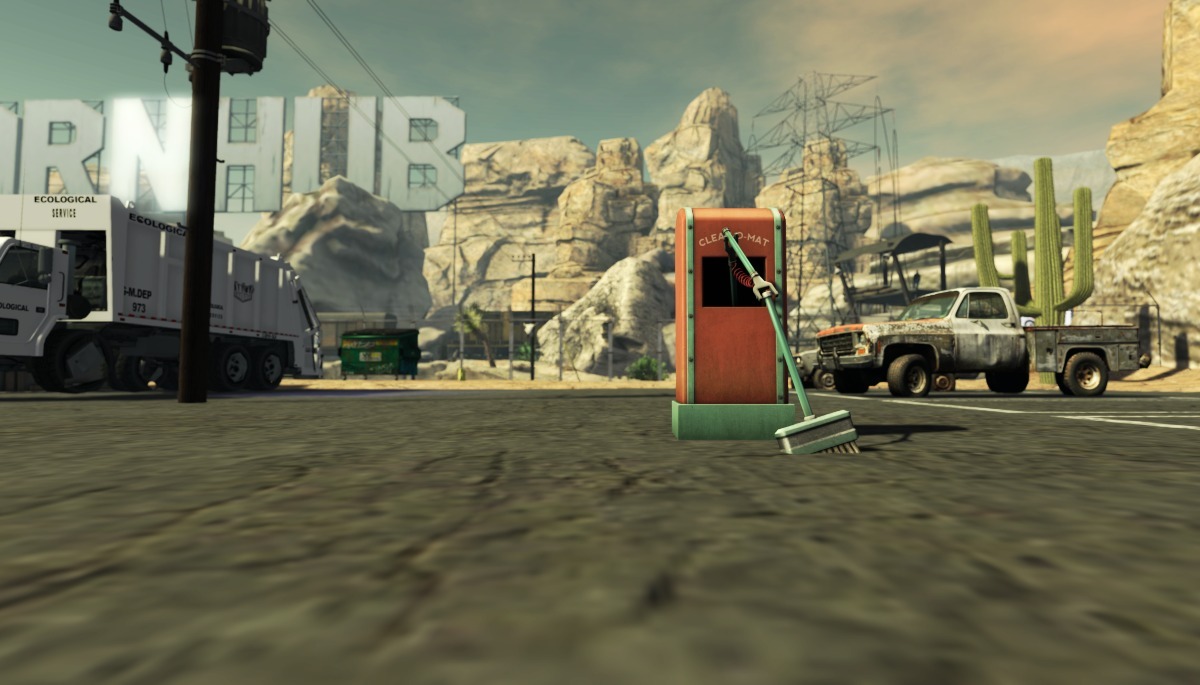 A cleaning machine in Cornhub

We can say, then, that the renewed interest in Roswell, decades later, was shaped by the cultural repertoire of the new times, in which different UFO stories had already emerged and conspiracy theories – not without reason – had multiplied. 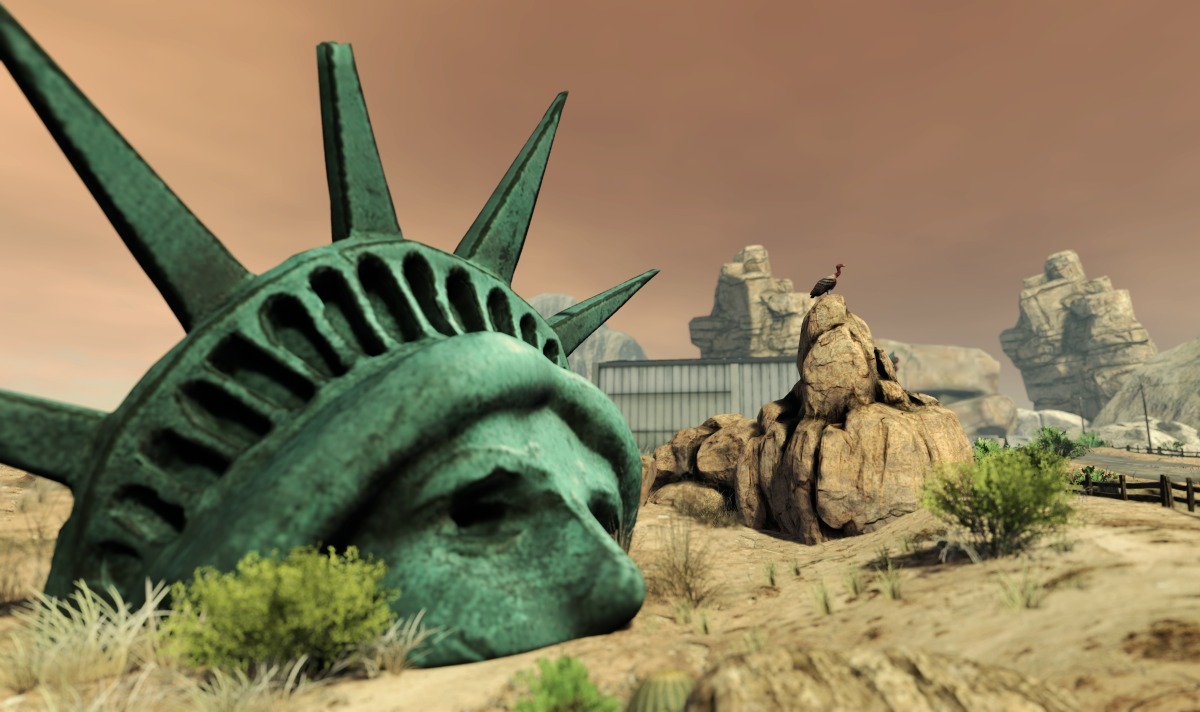 Ruins of the Statue of Liberty, representing decay

Well, not only the Roswell Incident representation in Cornhub follows that path, with references to Area 51, but also the whole scene is seen under a more contemporary point of view, with some of the items placed in the sim, such as the ruins of the Statue of Liberty and other elements, linking it with today’s view of decay – especially, decay as displayed in SL. 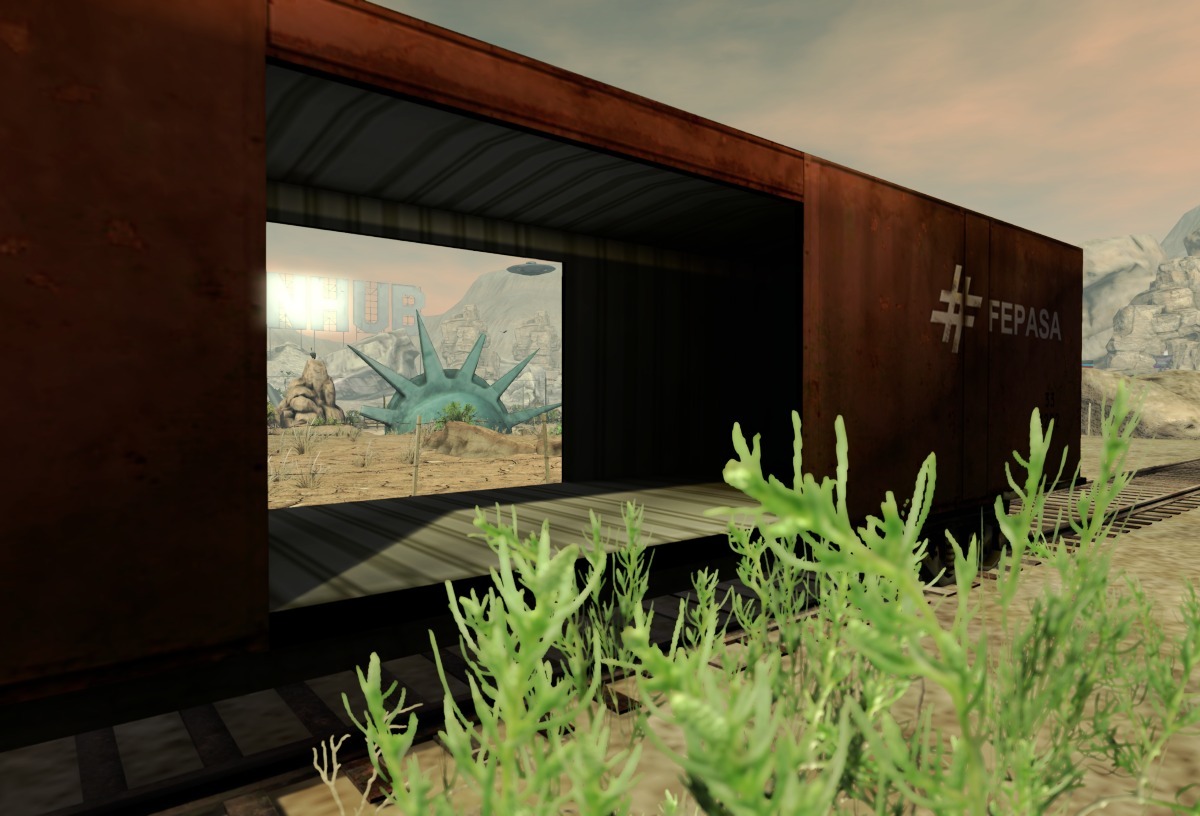 Wagon, UFO and the ruins of the Statue of Liberty 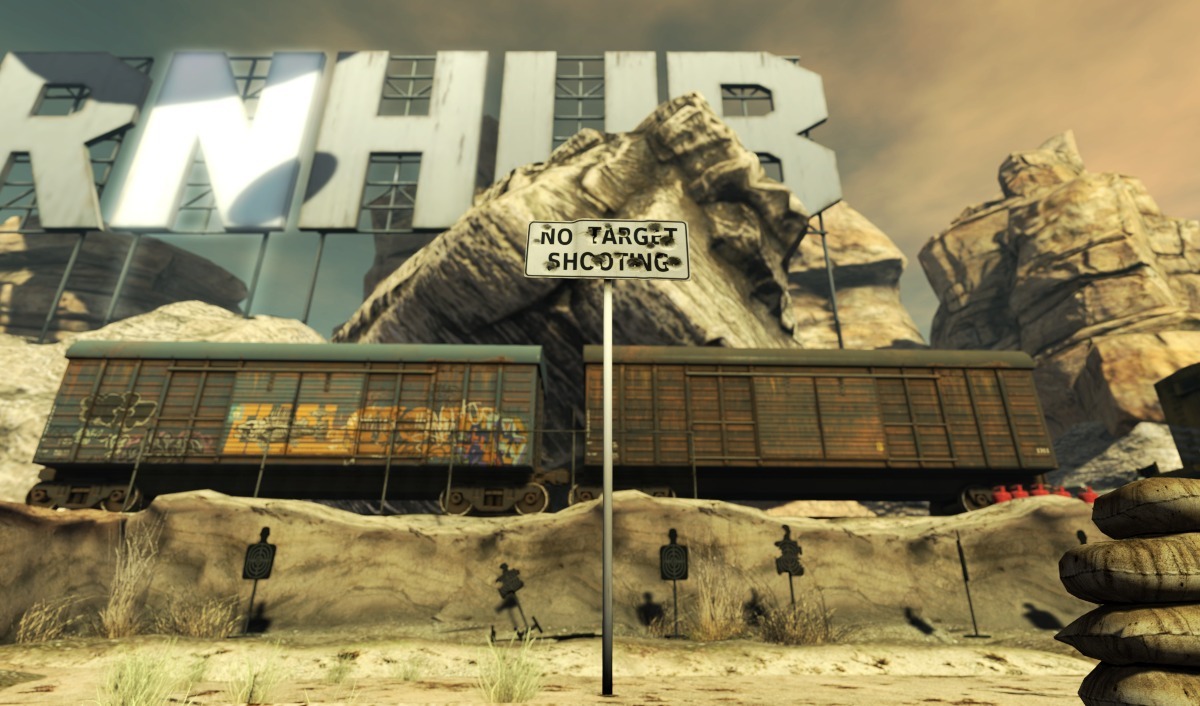 3 thoughts on “And a UFO crashed in Second Life”