The trailer-style living units in the Linden Home preview area at SL16B (running from June 20 until July 8) indicate that we may be on the verge of an important change in the way we conceive housing in Second Life. Of course, one cannot guarantee that the transformation will actually take place, and in any case it doesn’t seem that a revolution is coming. Still, if it does happen, it may significantly impact the way people experience SL. 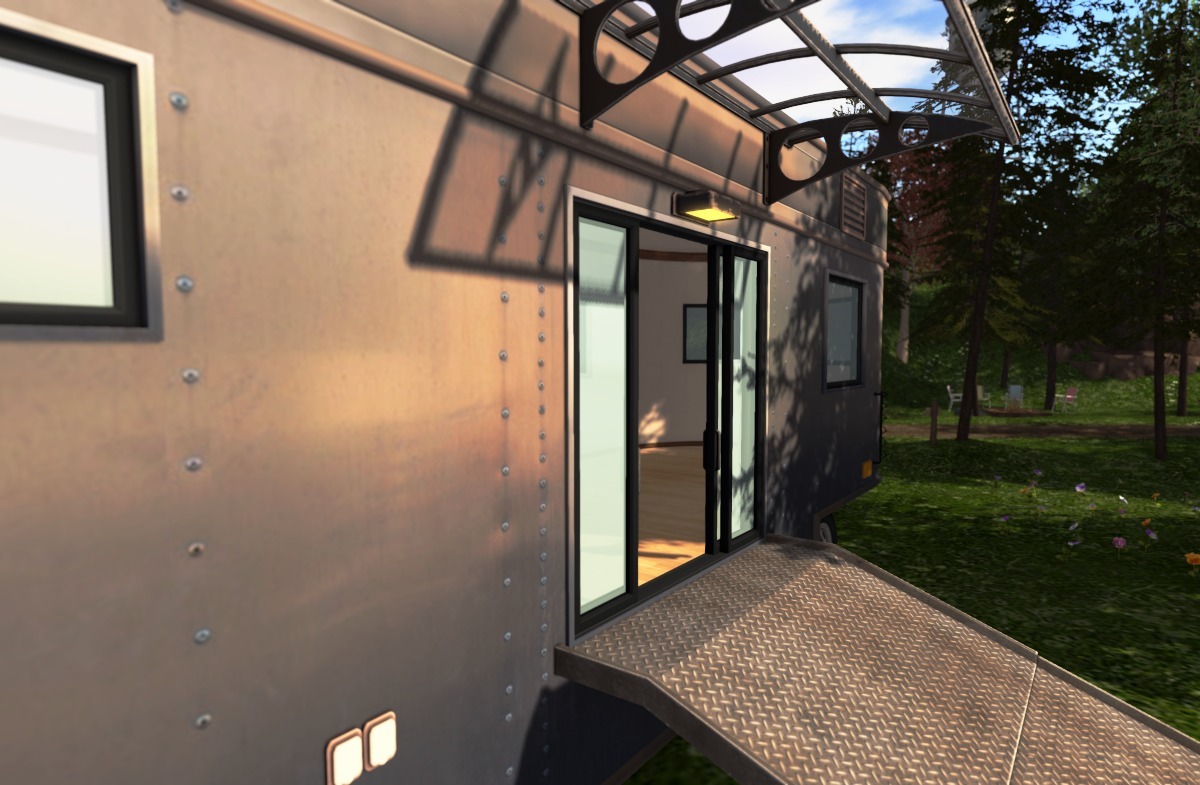 For a while now, to live somewhere in SL has meant to have access to a parcel – by means of buying, renting or sharing it with someone, for instance – in order to build or rez a house or a skybox where one can enjoy a significant degree of privacy. Once the house or skybox is there, one can decorate its rooms and, depending on the size of the parcel where it stays, set up a landscape around it.

Of course, other forms of dwelling have existed in SL, such as apartment buildings (with living units piled upon each other on the same parcel, as in the atomic world) or rooms in space stations. Still, they don’t tend to be the first option that we think of when we talk about having a home in Second Life. I would risk to say that, in most cases, the exceptions to that tendency are located in role-playing areas. 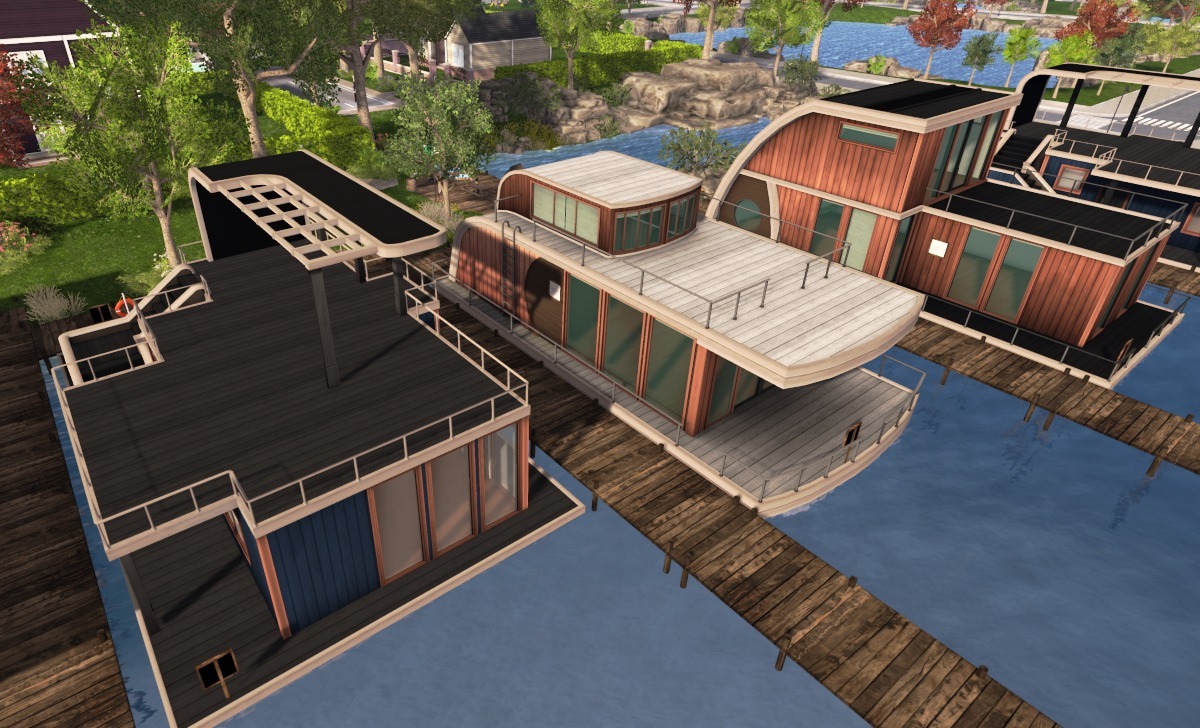 It all may have started to change when the Lab introduced the first houseboats in Bellisseria, the continent created this year for the new Linden Homes (and to which Gaim may work as a starting point if one is interested to explore it). The continent also has traditional homes, as LL calls them, but it was the houseboats that caused a buzz among a number of residents and that were the first ones to become unavailable. Of course, it has to do with the fact that they give their owners access to navigable waters. In exchange, they tend to be simpler, in terms of their interior design, and more exposed than the traditional inland houses. 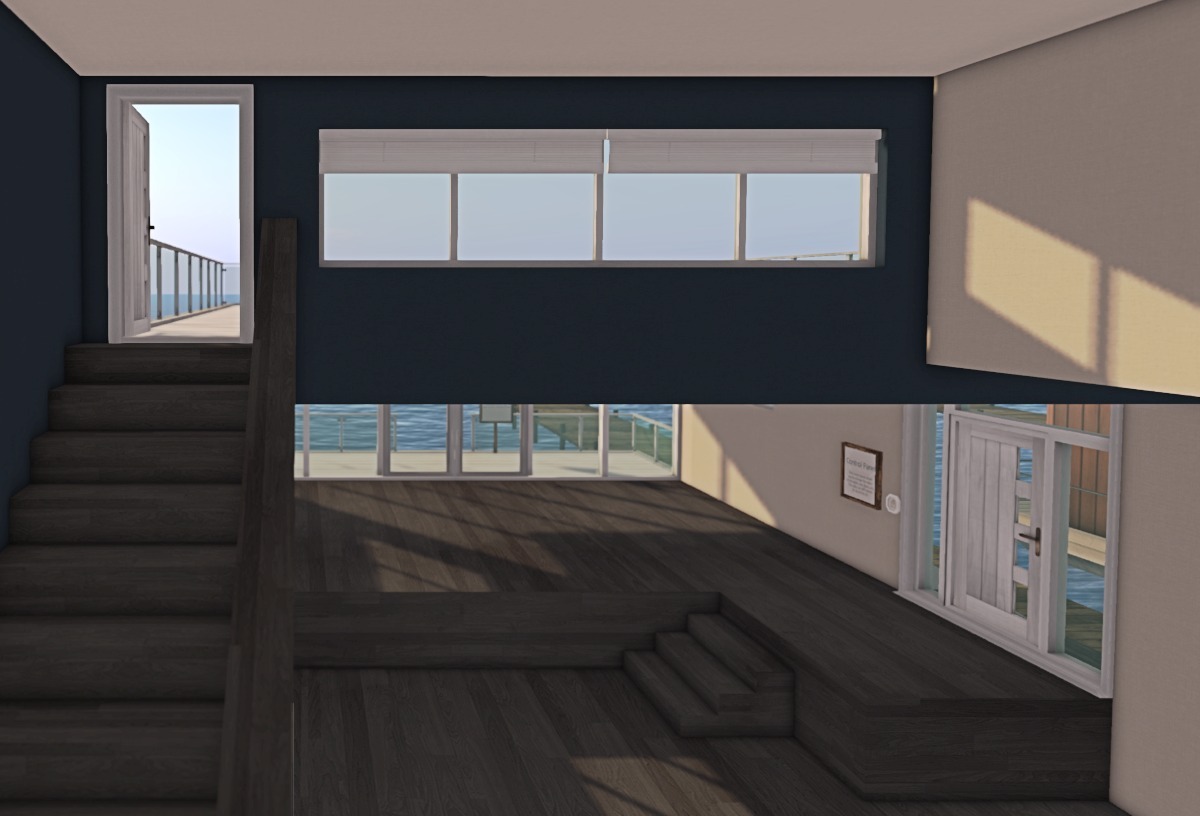 Interior of a houseboat: an area that can be subdivided 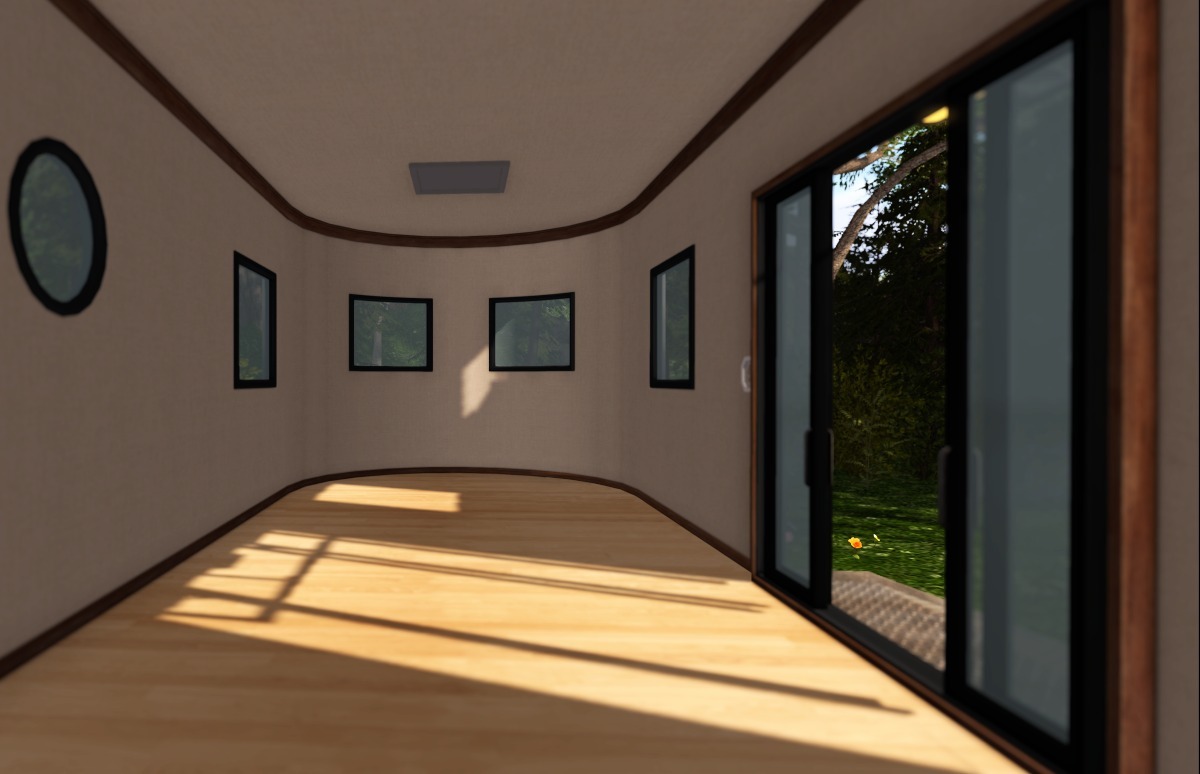 The interior of a trailer home: small single room

The exposure and the proximity of the houseboats to one another may have contributed to the fact that Bellisseria has witnessed the rise of a number of residents’ associations, newspapers (or blogs) and community events. Maybe even the houseboats’ internal simplicity helps people to leave their cocoons and go out there, creating opportunities for neighbors to meet. And here’s where things start to get interesting for the purposes of this post.

Trailer homes are simpler than houseboats in their interior design. Even if both are made as single-room living units, houseboats may be internally divided: it is possible to add a wall in some cases or to create different areas with the help of decoration. Trailers, in turn, are smaller and more difficult to be internally divided, especially in SL. Of course, it will all depend on how the Lab will establish the parcels in which the trailer homes will be placed, but it’s possible that most residents who chose that option will devote themselves more to outdoor decoration than to furnishing their dwellings.

If the new trailer areas planned by the Lab are built as the one that the company is showing in the preview sims, neighbors will be just there, close to us when we go outdoors – and trailers will probably favor the occupation of outdoor areas and people’s engagement in outdoor activities. Unlike houseboats, trailer homes don’t call attention for giving their owners access to navigable water. Because of that, we can actually risk to say that trailers’ main attraction is actually the idea that we can sit outside, do things around our living units without being contained by walls – and this model of occupying the space makes it easier for residents to interact among themselves. 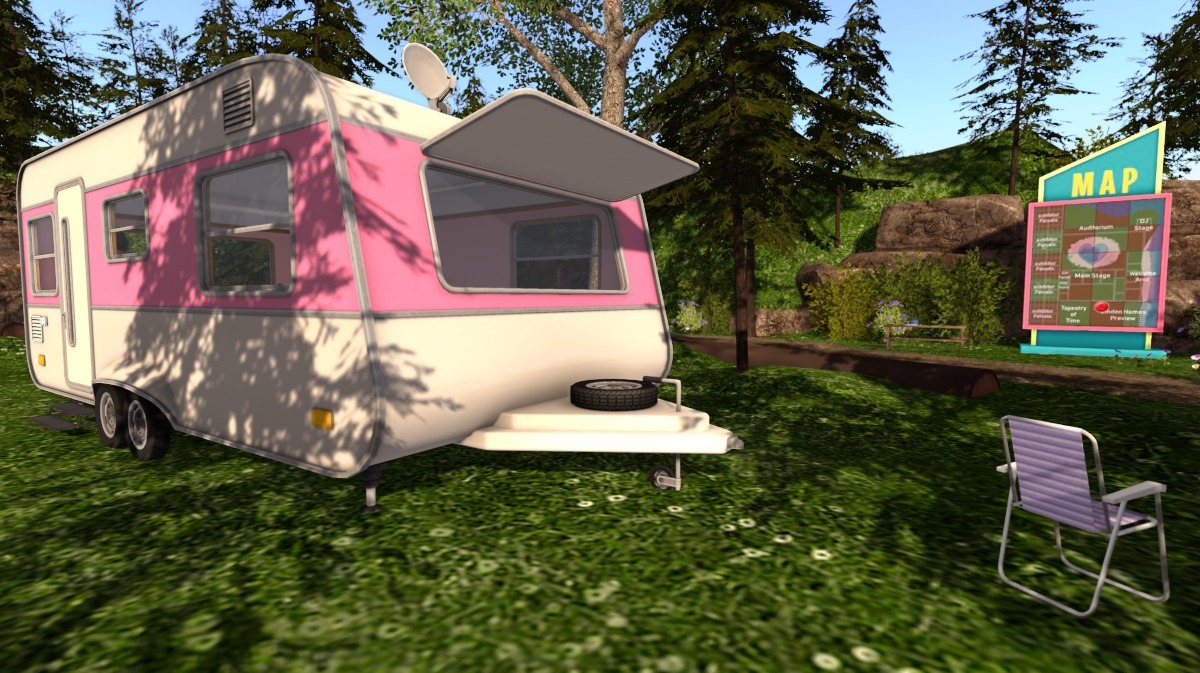 Trailer: a small living unit that integrates with the outdoor area

This characteristic may lead residents to become friends more easily with their neighbors, creating bonds and establishing communities whose participants have a closer contact with each other.

Of course, this is all speculation – but it is based on what I saw in the preview area, on how the trailers are placed there. If it’s actually the case when the trailer homes start to be available for SL premium residents, though, it will be interesting to see if this will affect the idea of communities in Second Life as a whole and, maybe, by consequence, people’s engagement with the product. 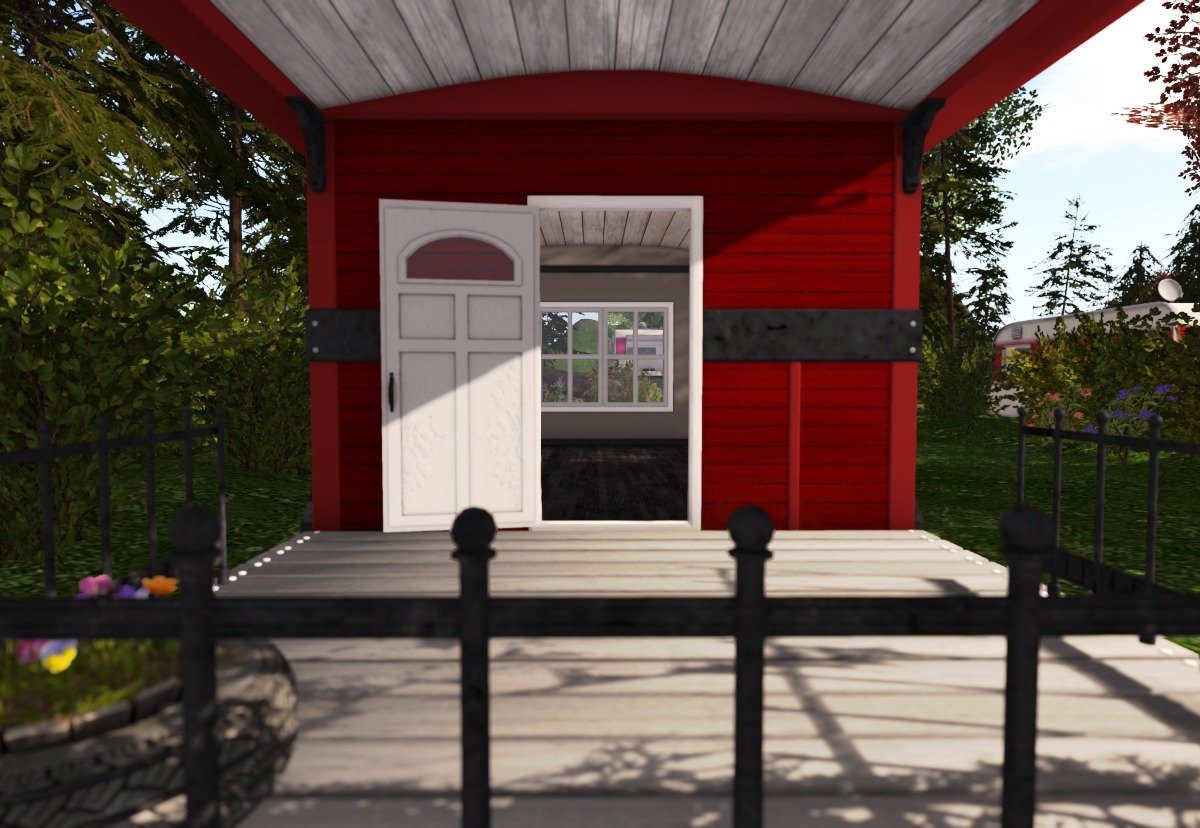 A trailer with a “balcony” area

Again, I don’t think we are about to see a revolutionary change. Traditional living areas, other mainland continents and private regions are still going to be there. I doubt they will all be abandoned in exchange for new trailer homes. Yes, the concept of most traditional mainland continents may be in decline, especially after the surge of Bellisseria. Maybe. But not all of it:  I think of Bay City or Blake Sea, for instance, when I argue that it would still be too early to conclude that a totally new age is coming. And if we consider private regions, it would be especially difficult to sustain, at this moment, that they will disappear en masse in favor of a new housing concept in SL. 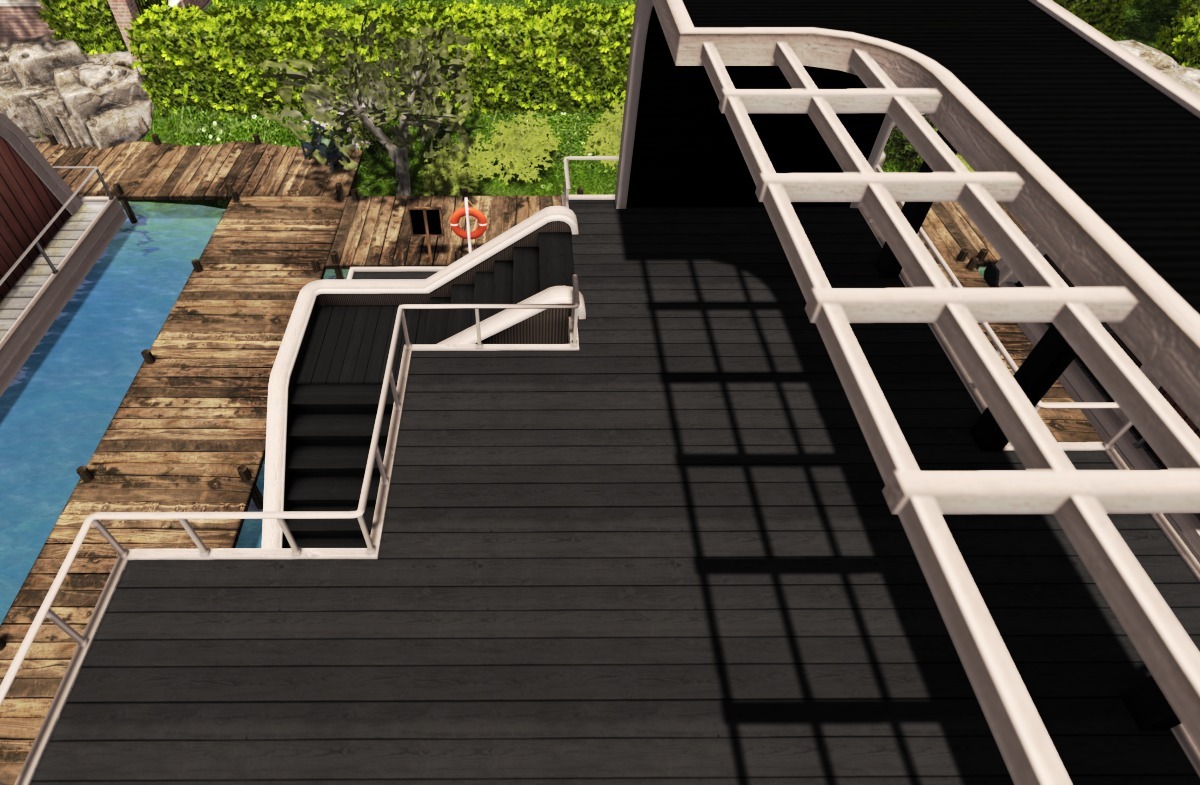 Detail of a houseboat

What we may actually see, I think, is the rise of an additional form of engagement with communities in SL, stimulated by this new phase of the Linden Homes project. It may even work well with other Linden Lab initiatives that seem to go in the direction of reducing LL’s dependency on revenues based on land fees. That’s what I mean when I say I think we’re about to see a movement in SL that will be interesting to observe and follow. Of course, it will all depend, too, on the degree of success of the new trailer homes, houseboats and similar dwelling units among Second Life residents.

5 thoughts on “New trailer homes at SL16B: a turning point in Second Life?”