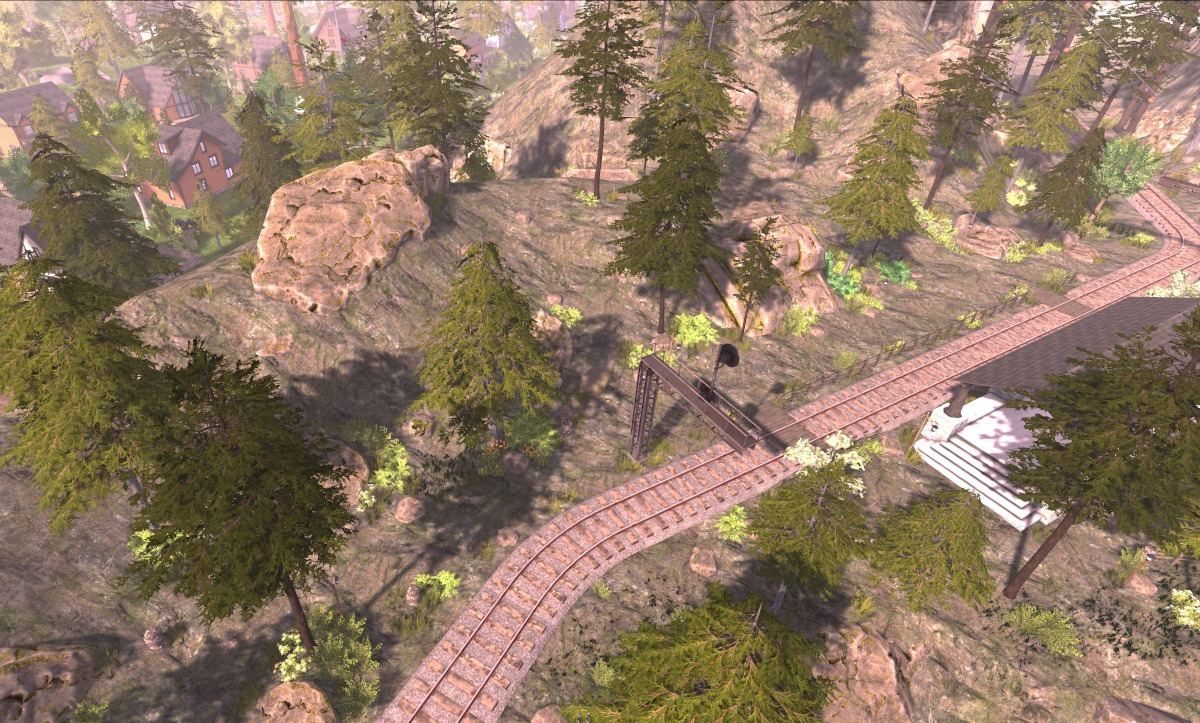 Randelsham Forest seen from above

As Bellisseria expands in Second Life – but it was clear from its very beginning – the latest Linden Homes continent becomes more organic and integrated. Each time it increases, visitors and residents can confirm that, in contrast with the old premium continents, Bellisseria has been planned as a continuum where houses are not just arranged in a row, but placed in a way that dialogs with the rich landscaping work around them. With that, Linden Lab appeals to an idealized recreation of reality that has been proving to be attractive to many, transforming the new generation of Linden Homes into an absolute success, with available units disappearing not long after they are offered.

Randy and Ricco wait for the train at Randelsham

As part of this project, there are masses, here and there, of protected land that work as “breathing spaces”. In the new Log Homes area, one of those masses is the Randelsham Forest, a sim where one can find vegetation, of course, but also a train station, a new community center installed in a tree house, and some other leisure items. 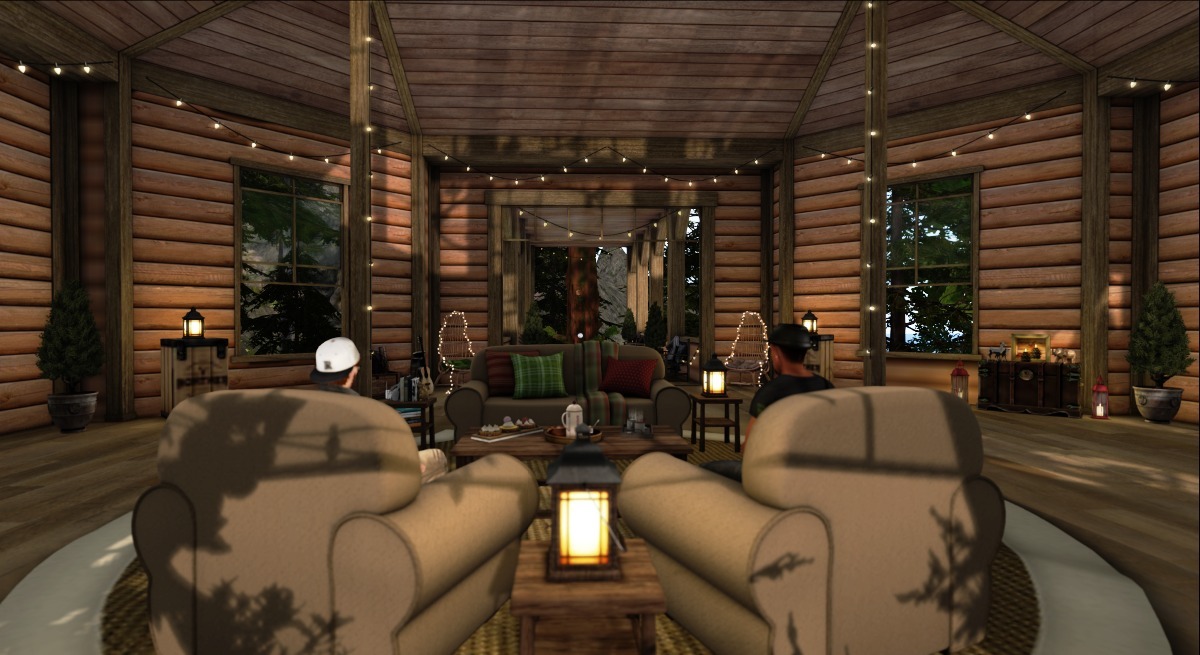 The community area, Randelsham Tree House, was recently announced by Patch Linden as a “hangout place surrounded by stunning natural scenery”. And Patch continues: “Like other community areas […], the tree house is able to be reserved as a community use space to gather with the community, your friends, socialize, hold events, and enjoy […].” 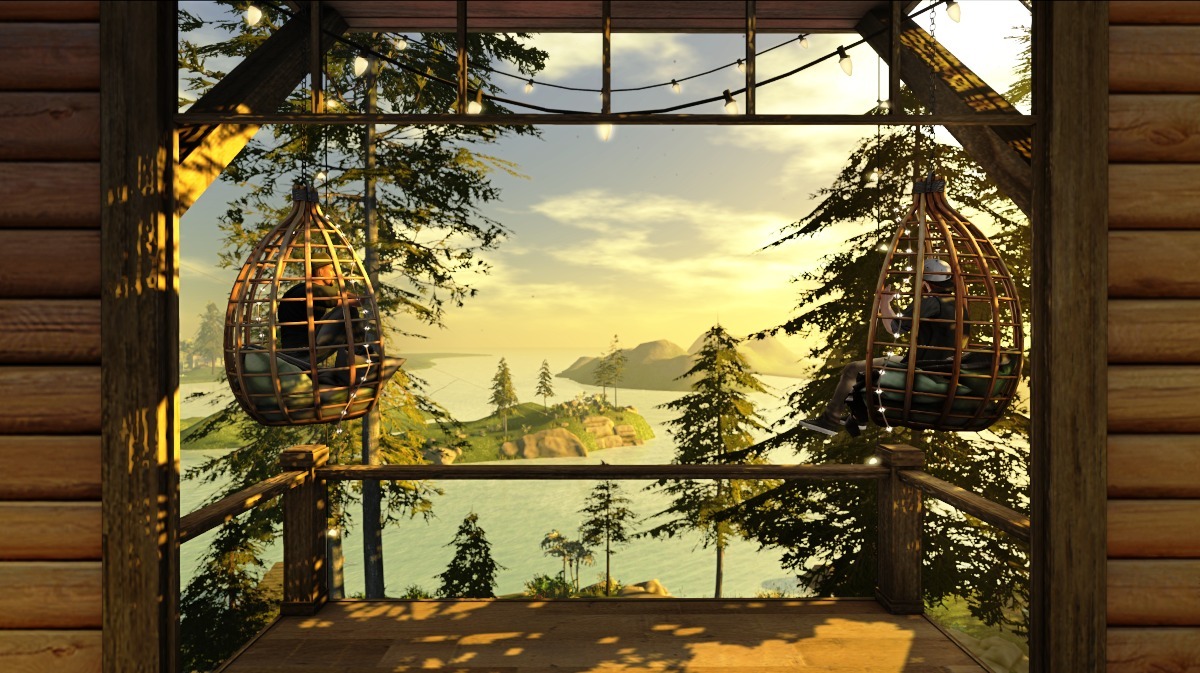 View from the tree house: the lake

At the border of a lake, it is indeed a beautiful place and, besides the possibility of contemplating the amazing scenery, it offers some fun too, such as riding bubbles (to explore the area by floating around) and, further in the forest, zip lines – one of which takes you to a small island where you can see the tree house from a different angle.

By offering a place for residents of Bellisseria to hold their events, Bellisseria’s community areas not only have been solving a problem for those who live in Linden Homes and have no place to gather a bigger crowd of friends: they have also been part of an effort to promote some sense of community in the continent. 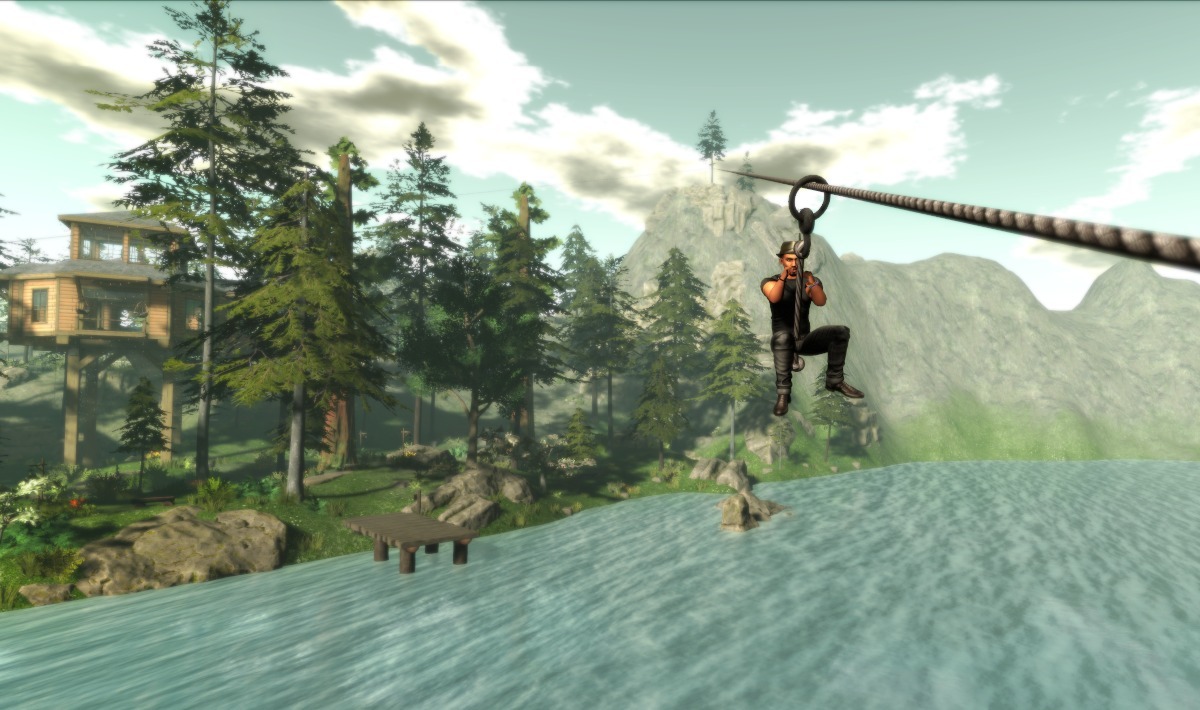 Randy going down the zip line

Actually, as a new resident in Bellisseria (my husband and I had to leave the place we previously rented – and I’ll add a note on that at the end of this post), this is something interesting that I could observe there: people who live in the new Linden Homes have actually created different groups for keeping in touch, which actually shows a tendency for building further community ties. 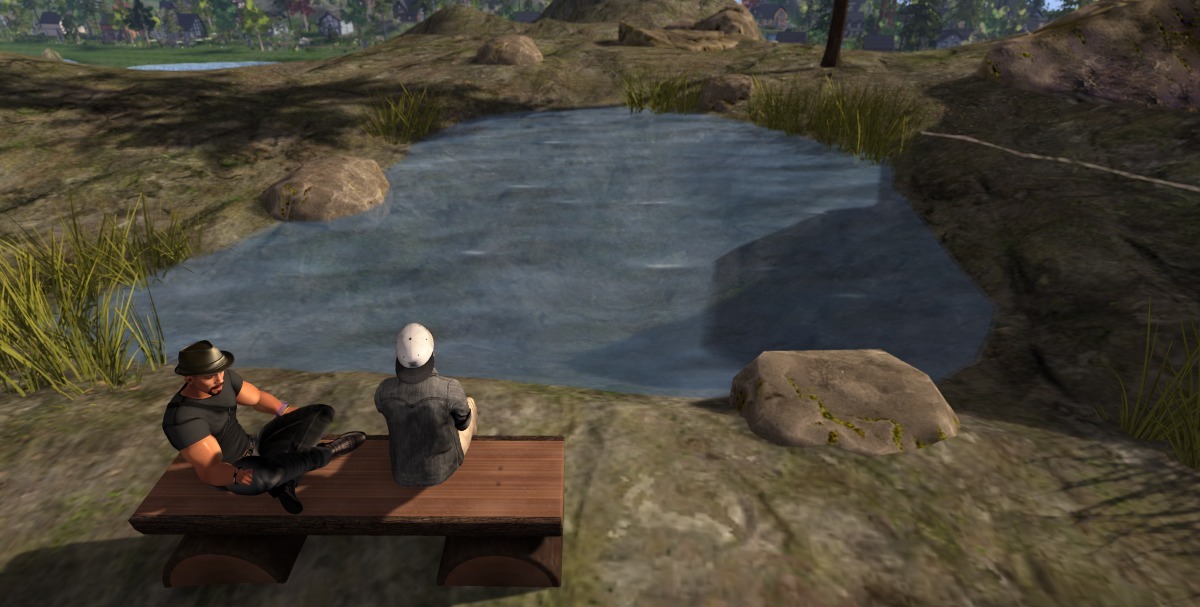 Randy and Ricco on the top of a hill

It is actually interesting to see the idea of building communities being reinforced in SL. It sort of balances the fact that some of the most well-known sims in Second Life are amazing areas to take pictures or to get mesmerized by the landscape and decoration but feel lonely – even if there are other people there when you visit them, for those places are not meant for gathering, but for contemplation. 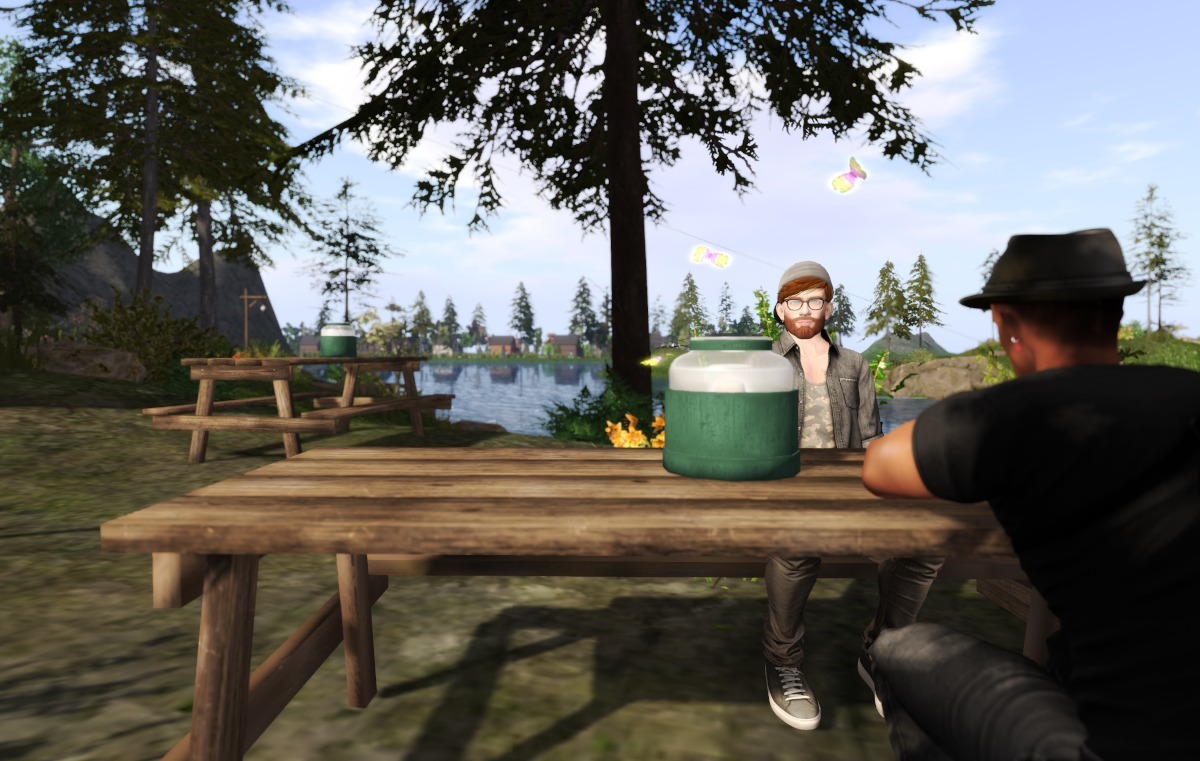 The picnic area, by the lake

Even though there are technical limitations to the platform that prevents it from being used for mass events (but let’s notice: mass events do not mean community events), SL has also been used, from its very beginning, not only as a means of building virtual objects and creating virtual places, but also as a way of promoting interaction between people – and that’s why we have dances, sessions for reading poems and other situations in which people do meet on the grid. 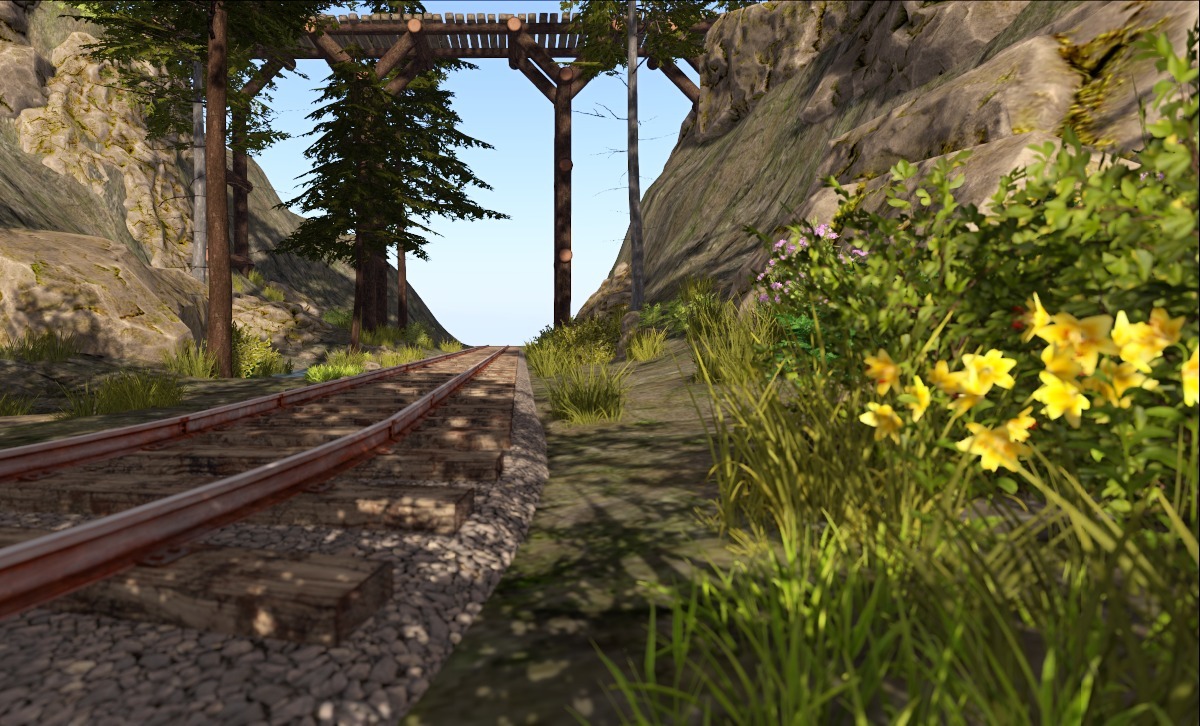 The railway that corsses the forest

For closing this post, I’d like to comment on the process of leaving the homestead that my husband and I had rented for years, in order to move to Bellisseria. That decision was motivated by real life events that prevented us from keeping the homestead sim. My husband, Randy, told the sim owners in advance that we would not renew our rent – but we had a month to deal with the moving process. We cleared the place a while before the rent was due, but we kept the expectation to have the sim available for us until the very last day that we had paid for. Nonetheless, Randy found out that the sim got rented to someone else before our rent was over. Of course, he asked for a refund – specifically for the time that we thought we would still be able to use the place. He was told that there would be no refund, for it was rented just because we had abandoned it to griefers, and the landlords were actually protecting the sim from our negligence. Of course, that’s a poor excuse and my husband insisted on the refund. Eventually, Randy was refunded what was due, but he got estate banned by the group who owns the sim. Not simply blocked by those persons, but estate banned, even though we had always paid our rent with no problem and had created no trouble during the time we lived in their homestead. Because of that, as a matter of principle, no sim belonging to those people will be mentioned again on this blog, no matter who occupies them.

One thought on “A community forest in Bellisseria”