The other day, I was thinking that, while Second Life as a whole may be considered a simulation, some particular elements of what we see and do there could be thought of as a simulation in the simulation, or a second-degree simulation. Let me try to explain what I mean. Our avatars sometimes reproduce things we do in the atomic world, like walking, and sometimes go beyond our capabilities in the so-called real world, as when they fly – and walking and flying are ways of going around, of moving from one point to another. We wear clothes in SL, and clothes cover our bodies. But what’s a headphone for in Second Life? Headphones were created so sound could be delivered straight in our ears, without bothering people around us. In SL, though, they are more like props, they may say something about us, about our avatars, but they don’t serve the purpose that they were made for in real life. In a way, they are useless (from a utilitarian perspective). Nonetheless we like them – and if you don’t like headphones, there will be some useless item that you enjoy, I’m sure.

With that in mind, I started listing to myself some second-degree simulation elements that we love in SL, ranging from places to smaller items. By we I mean myself, hehehe, for I didn’t ask others in the grid what they think about my list. Or… in fact, I asked my husband, so we means Randy and me 😉 . We didn’t mean to prepare an extensive catalog, it’s just an unpretentious way to have some fun, so we limited ourselves to five items – but I’m sure my readers could think of many more. So, here’s our list, in no particular order: 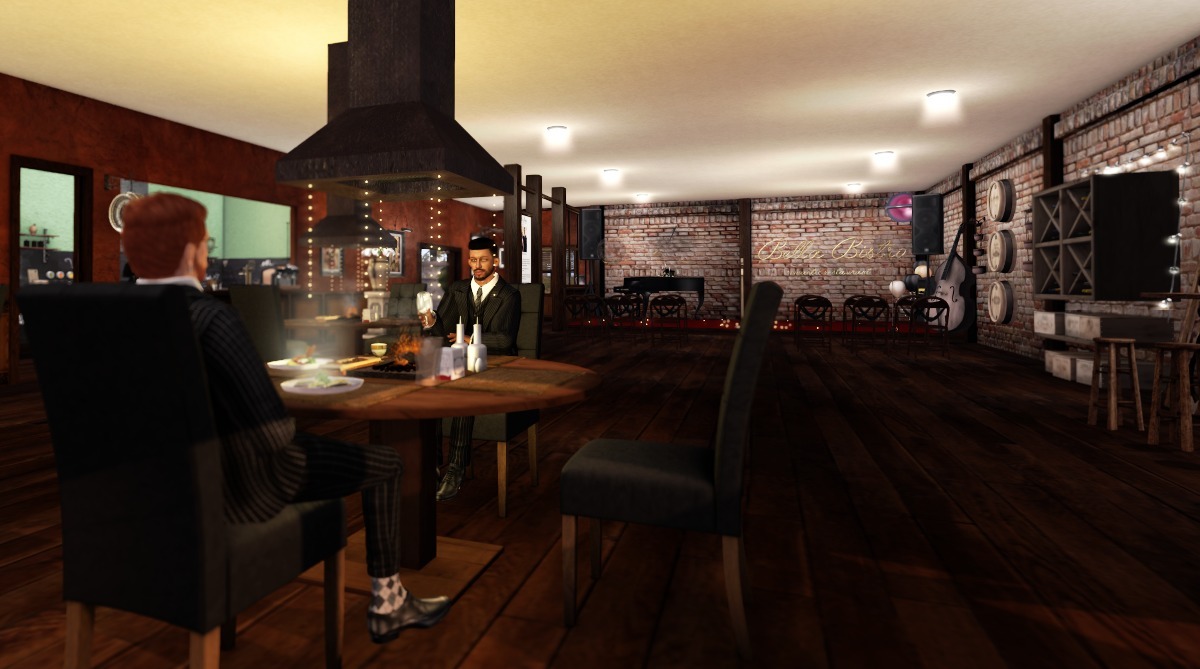 Randy and me dining at Bella Bistro. The restaurant has a place for live music presentations

We love them because they’re a great way to start the night with someone: restaurants can be romantic, sometimes cozy, sometimes elegant, not to mention that the ones that are worth it always have great… food? Nah, food doesn’t matter, we don’t really eat in Second Life, we just pretend we do. Have you ever seen food critic in SL? Really?

Of course, restaurants create an ambiance for a more intimate talk, a joyful one, even in Second Life. In real life, they are generally associated with good time. Eating is actually a great pleasure and sharing food is a powerful way to share with someone (not by coincidence even some sacred communal rituals involve feasts). We certainly connect with all that when we go to a restaurant in SL – but we won’t really taste food. We will taste conversation and the company of our beloved ones. 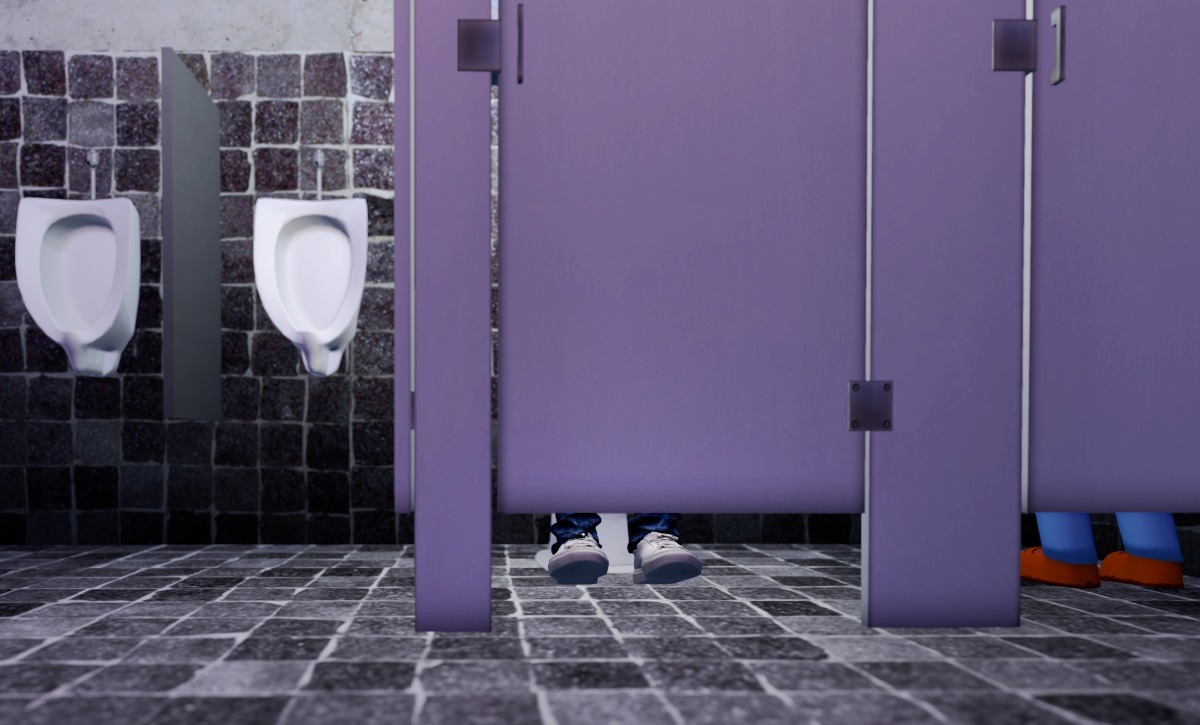 A public bathroom in ToppMart

In our opinion, Randy’s and mine, no house is complete without a kitchen and – though some despise it in SL – a bathroom. As places to cook, kitchens are useless in Second Life, for the same reason as restaurants. Still, does a house with no kitchen still feel like a house? Or is it more like a hotel room?

Bathrooms may be considered even more useless by many: if it’s nice to imagine that we are preparing breakfast or sitting at kitchen island with some tasty stuff in front of us, it may not be very popular to keep thinking of what we do in the bathroom (well, some fill their bathrooms with sex-related furniture, and I bet they love to think of what they do in there). Still, even if avatars, let’s say, don’t hear nature calling, it’s architecturally worth to plan house units with bathrooms, to consider where they should go in a house or apartment, to distribute items in them, to decorate them. Also, not only do I like to see houses with bathrooms, but also some sims with public restrooms may be interesting as well. 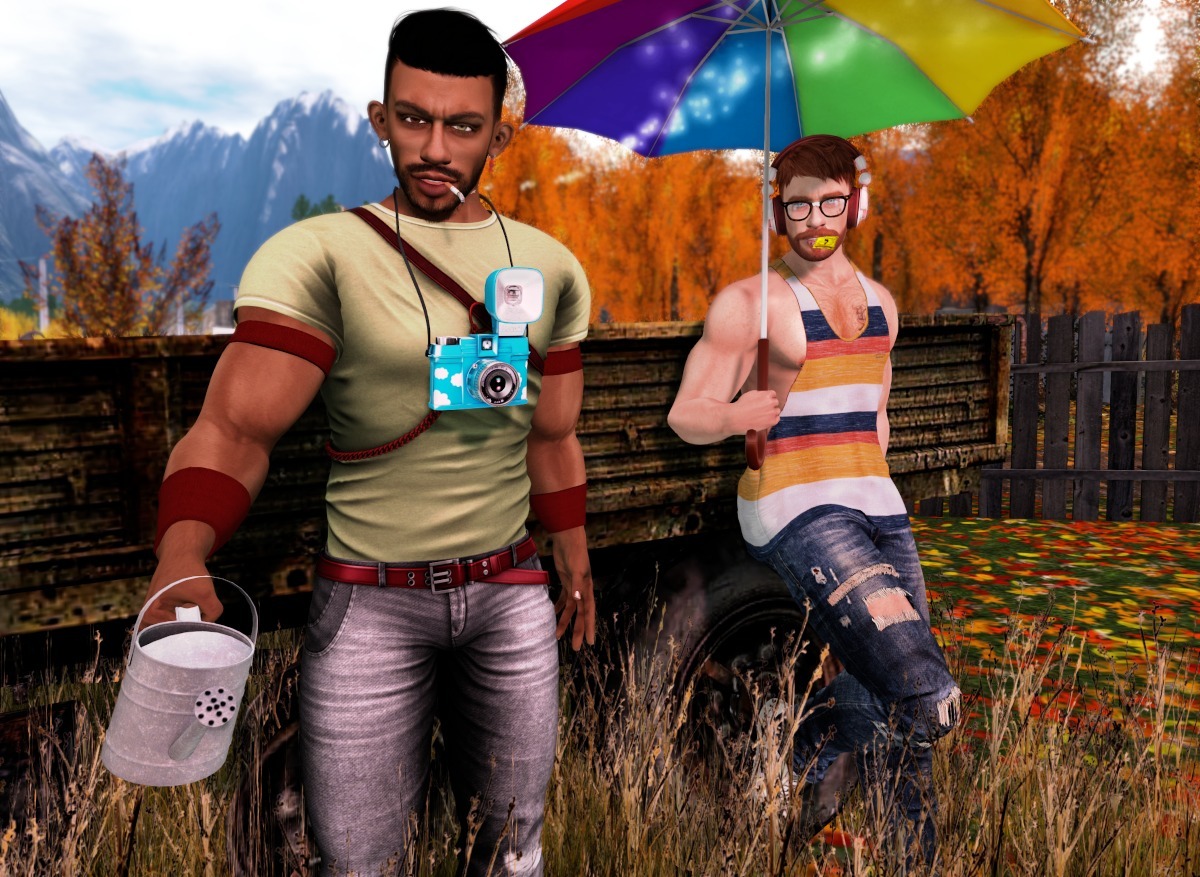 Headphones, as I mentioned in the beginning of this post, are on the list – but they are not alone: we can also mention glasses (you won’t see better in first-person camera just because you have glasses on), photo cameras (right?), umbrellas (rain doesn’t really make your clothes wet in SL), cell phones (does your avatar send Whatsapp messages instead of IMs?), watering cans (virtual flowers can survive without water), condoms (you don’t need them in SL, but in real life they are undoubtedly useful and necessary!), watches (both your computer and the viewer you choose to access Second Life will tell you what time it is), coats (who actually feels cold in the virtual world?) cigarettes (at least they don’t harm your lungs in a virtual environment) and many other personal devices can be counted here.

We love them because they are ways to express ourselves, they help us build our personal images or simulate certain situations (for a picture, for instance). They are means to communicate something, to help others read us and to represent us even to ourselves. In SL, in particular, they are something to show off, not only to have. That’s why, no matter how useless they are, our personal gadgets will always be with us. 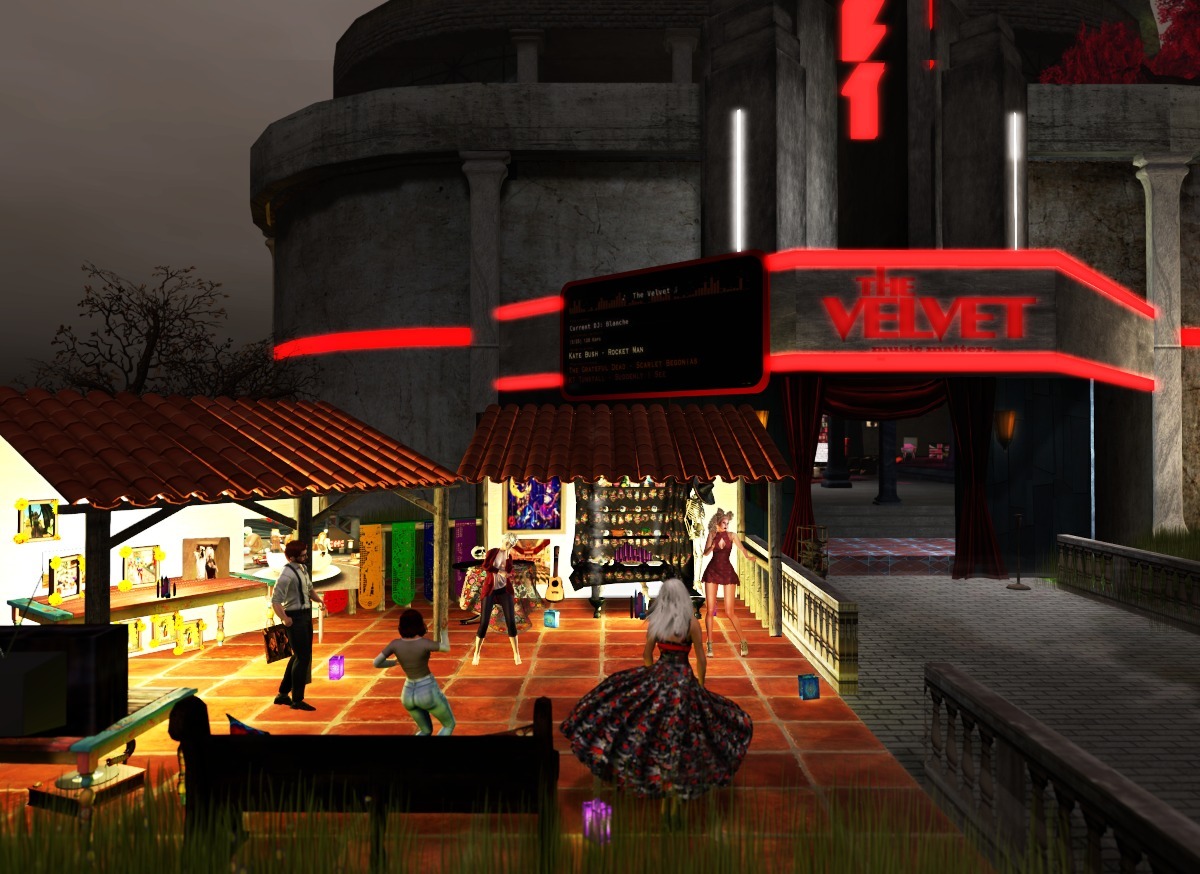 Dancing at The Velvet

I see a potential polemic here, for classifying dances as useless. Yes, I’m talking about animations that make your avatar simulate that they are moving their bodies to music. The way I see them, they could be considered second-degree simulations. Let’s see: in real life, to dance is to move our body according to a certain music, following its rhythm. It’s a form to respond to the beat of drums, to the cadence of a composition. In a way, it’s like a reaction or a form of communication with the music that we hear (or feel).

In Second Life, dances are prerecorded movements that have their own fixed rhythm. When we go to clubs, we do not keep testing our various dances to see which ones flow at the same rhythm or each song we hear. There’s no mechanism for adjusting tempo if we need some fine tuning to correspond to the cadence of what the DJ is playing. It’s not only that we simulate that we are dancing through our avatars: or avatars also simulate they are responding to some actual music, which they are not, for they are just performing some preloaded animation.

Yet, we don’t go to clubs to see our avatars standing still there (but I confess I sometimes like to have my avatar sitting on a couch, just listening to the music, with other people around). We like to see our virtual selves dancing as we would probably do in the atomic world. That may help us feel the moment, even if the dance rhythm is not right. So, let’s keep on dancing. 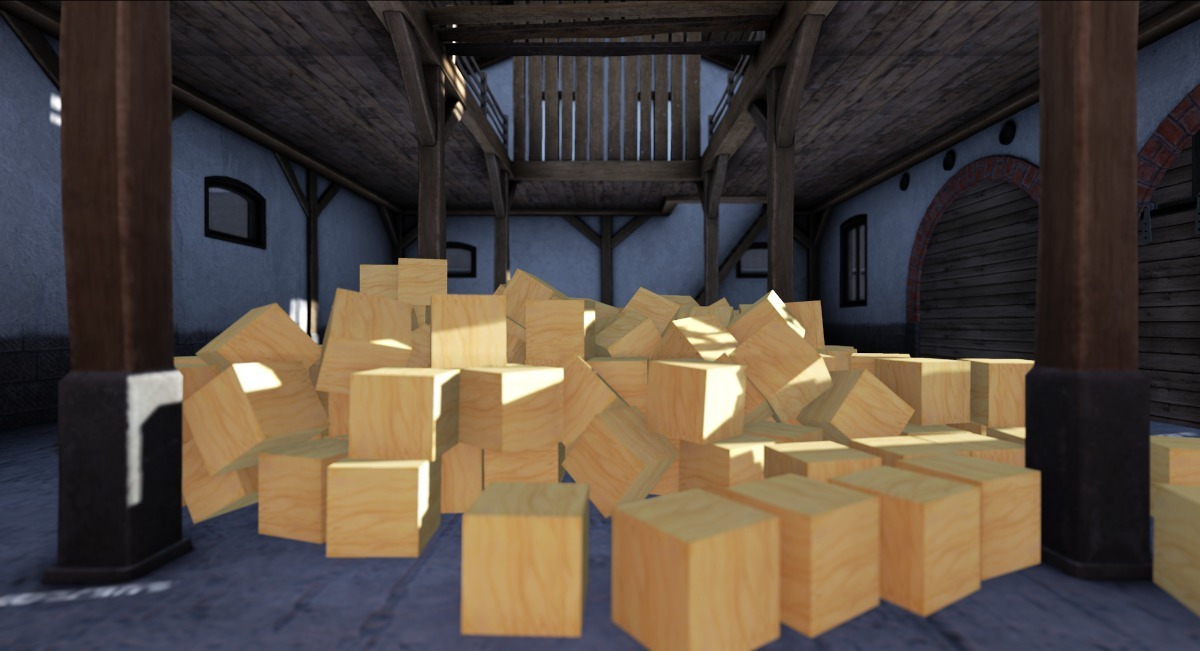 Traditional prims are different from the other items on this list, but I think they’re worth mentioning. It’s not that they are second-degree simulations: they were made relatively useless by the improvements that we’ve seen in Second Life. After mesh imports became common on the grid, not only people learned how to build elaborate stuff with lower land impact, but also traditional-prim objects started feeling outdated. I bet they’ve been completely replaced in some sims.

Yet, for those of us who are old enough in the SL scale, prims are part of what really made our (virtual) world thrive. With prims, we all could build stuff with no special knowledge on how to manipulate vertices and faces in a 3D design software. Even today, some of us still build objects using prims before converting them into mesh by means of some tools provided on Second Life Marketplace. And prims can still be great as support for pictures (when you don’t really need or want a decorated frame), as base-elements for simple huds and so on.

As someone has already said, it all started with a cube (but traditional prims can also be cylinders, spheres, tori, etc.).

With that, we’ve arrived to the end of this post. For sure, this is not an extensive enumeration. Certainly, there are many other items on the grid that could be considered useless and beloved at the same time. Each one of us has their own list – and I bet the many lists out there are very interesting.