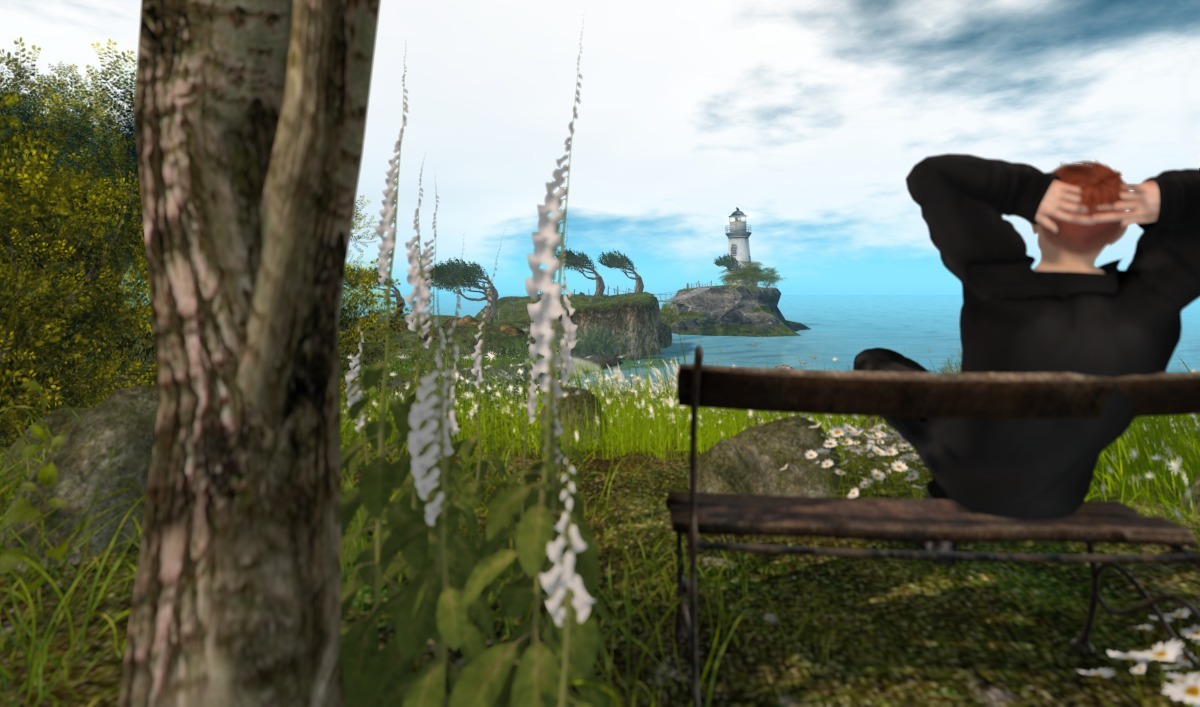 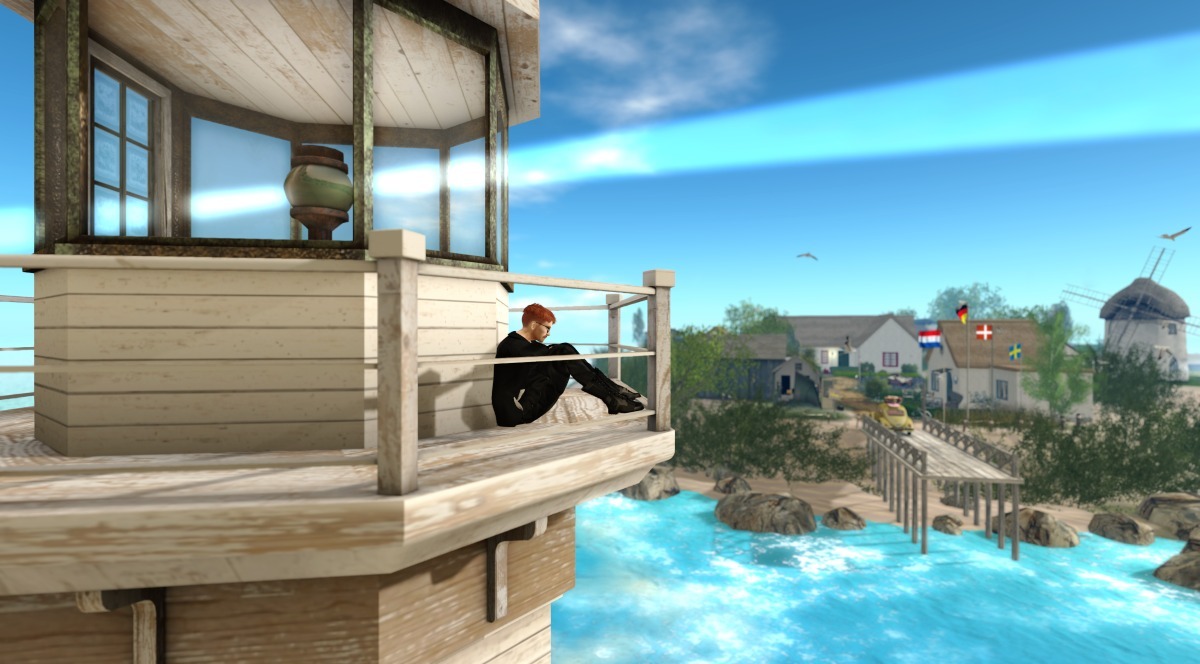 Ricco in a quiet time at The Mill

It’s fair to say that there’s been a trend in Second Life to build, present and photograph sims that represent small villages at a somewhat remote beach or houses that are more or less isolated in the countryside – places such as The Mill, at Lemon Beach, and Whimberly, which illustrate this post. Certainly, regions like those tend to be beautiful. Still, beauty doesn’t seem enough to explain the fascination they exert.

Whimberly is a sim where spring flourishes with its natural (or virtual) charm. Among flowers and watercourses, a couple of houses and other buildings, such as a lighthouse, can be seen, without dominating the landscape (though sometimes creating visual points of interest, especially for photos). 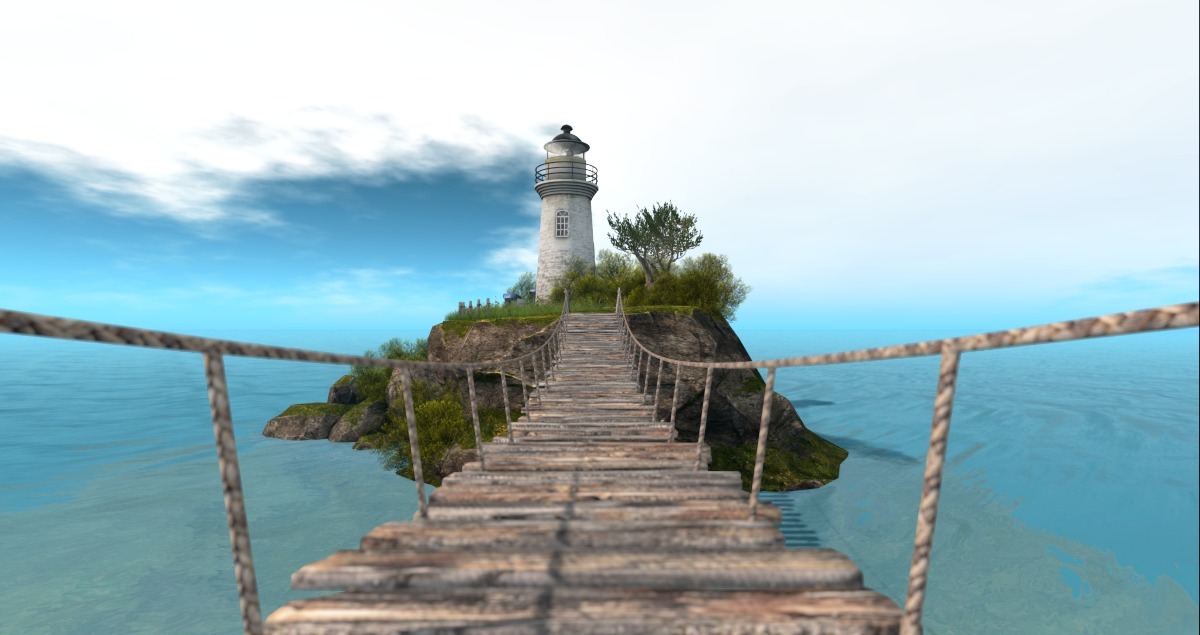 The place conveys the idea of calmness and may work as a vehicle for relaxation. It carries a certain peace, arousing in us that contemplative spirit of someone who finds themselves before placidity – and that, I would say, is what’s behind the attraction that sims like Whimberly have been exerting on many of us, SL residents. 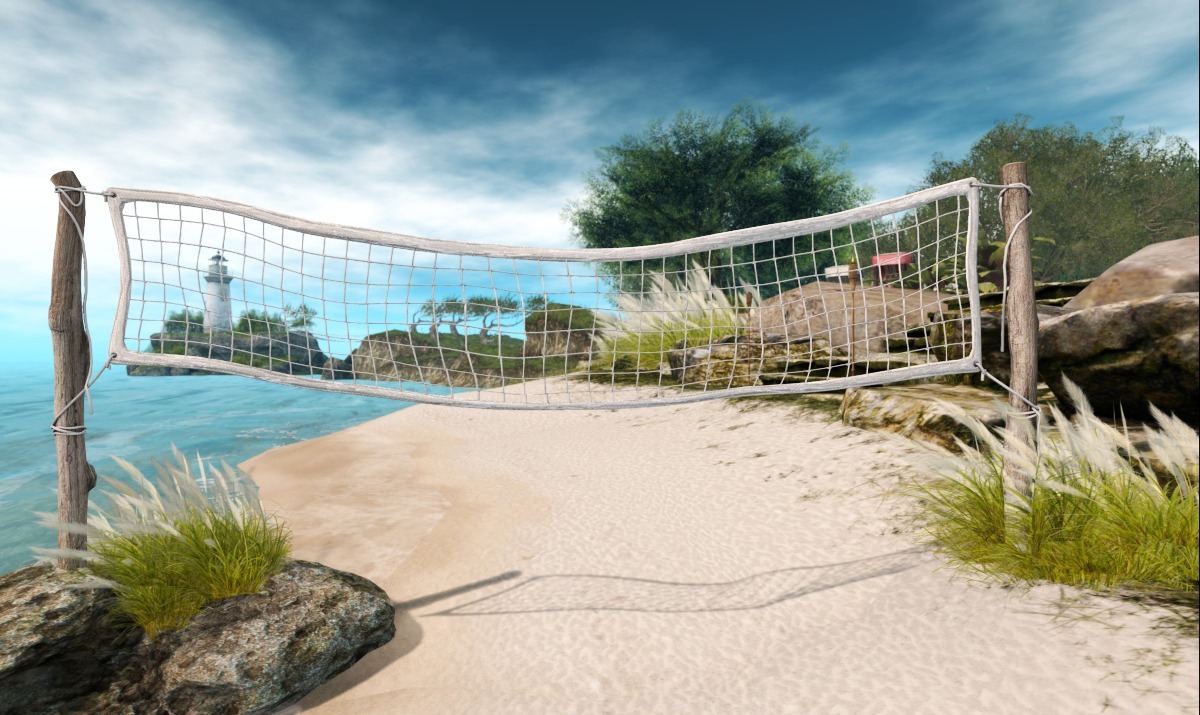 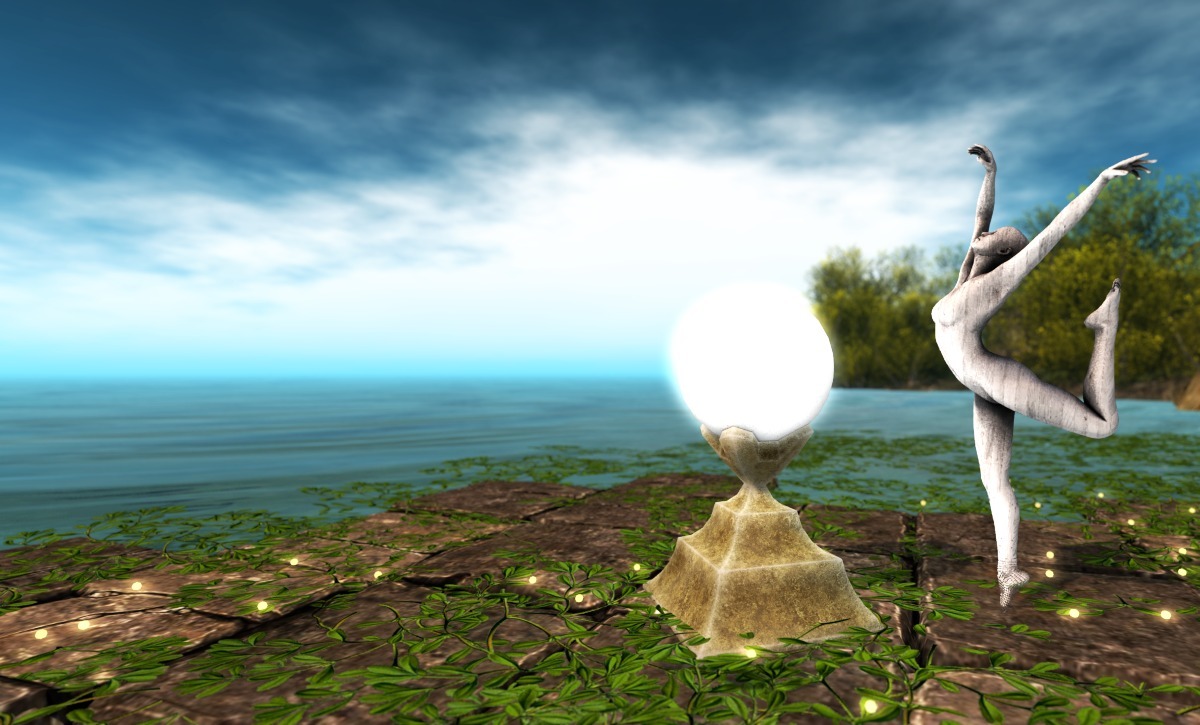 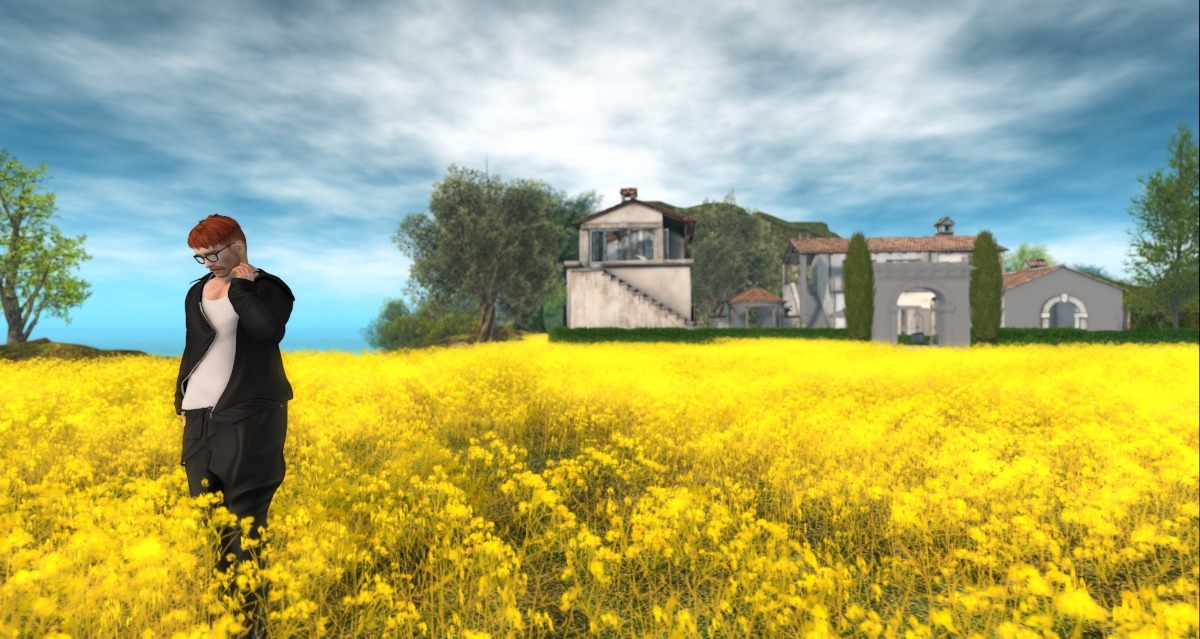 It’s obvious that we need some relaxation, either for recharging our batteries or for reducing anxiety. It’s not unusual to see Second Life being used by its residents as a way (probably not as the only way, but still as part of a strategy) for achieving that. And countryside or suburban places, or even small beaches, may be perfect for such a goal. 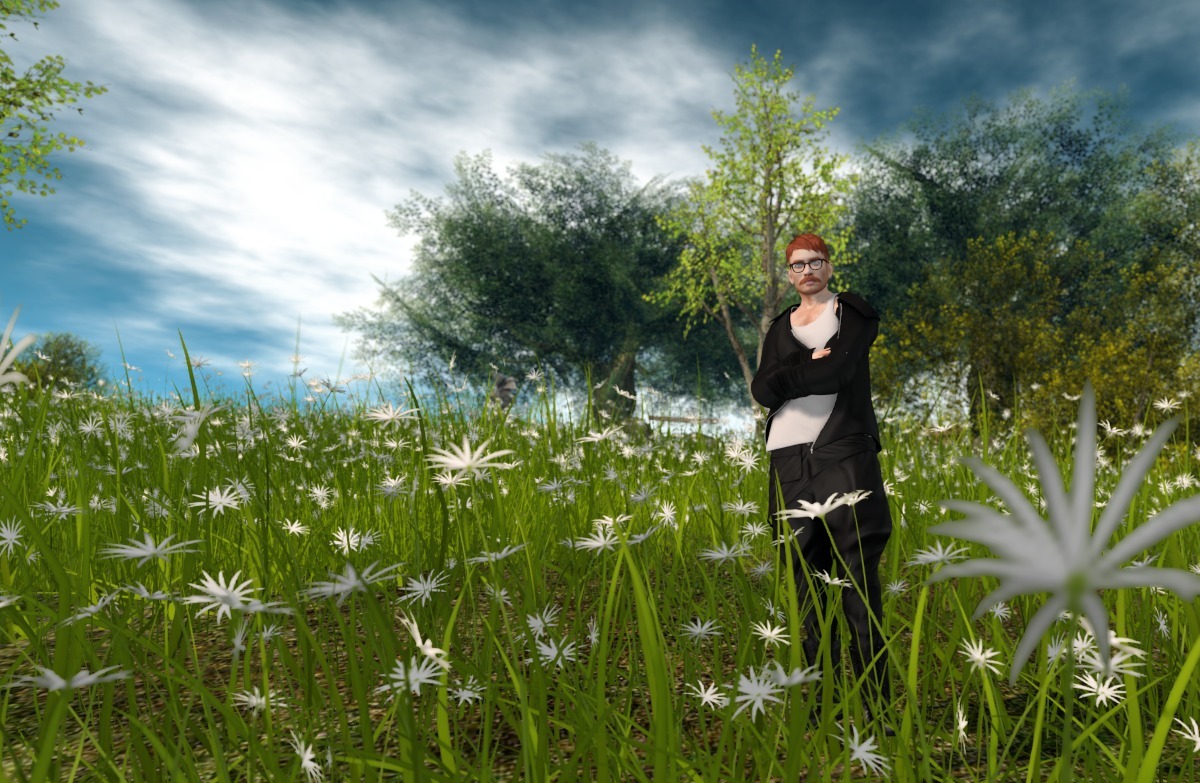 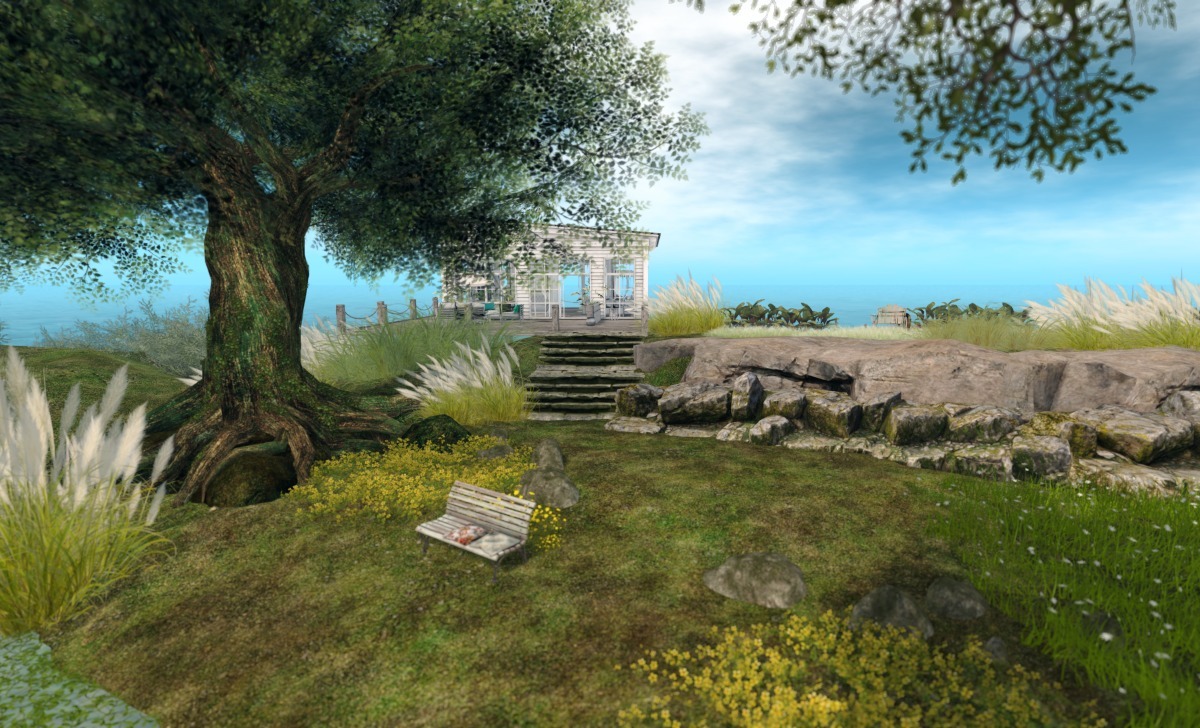 It is well known that natural elements are good for relaxation: watching trees, contemplating flowers, being close to water (if they are not turbulent) – all that may contribute to build tranquility in us. There are different theories to explain why nature has that effect on us. They vary from a cultural tendency we allegedly have of looking at nature in a romantic way to the idea that natural items may have a rhythm, such as a moderate wind moving leaves on a tree, that drive us away from static monotony but do not represent an uncontrolled flood of stimuli for our minds. 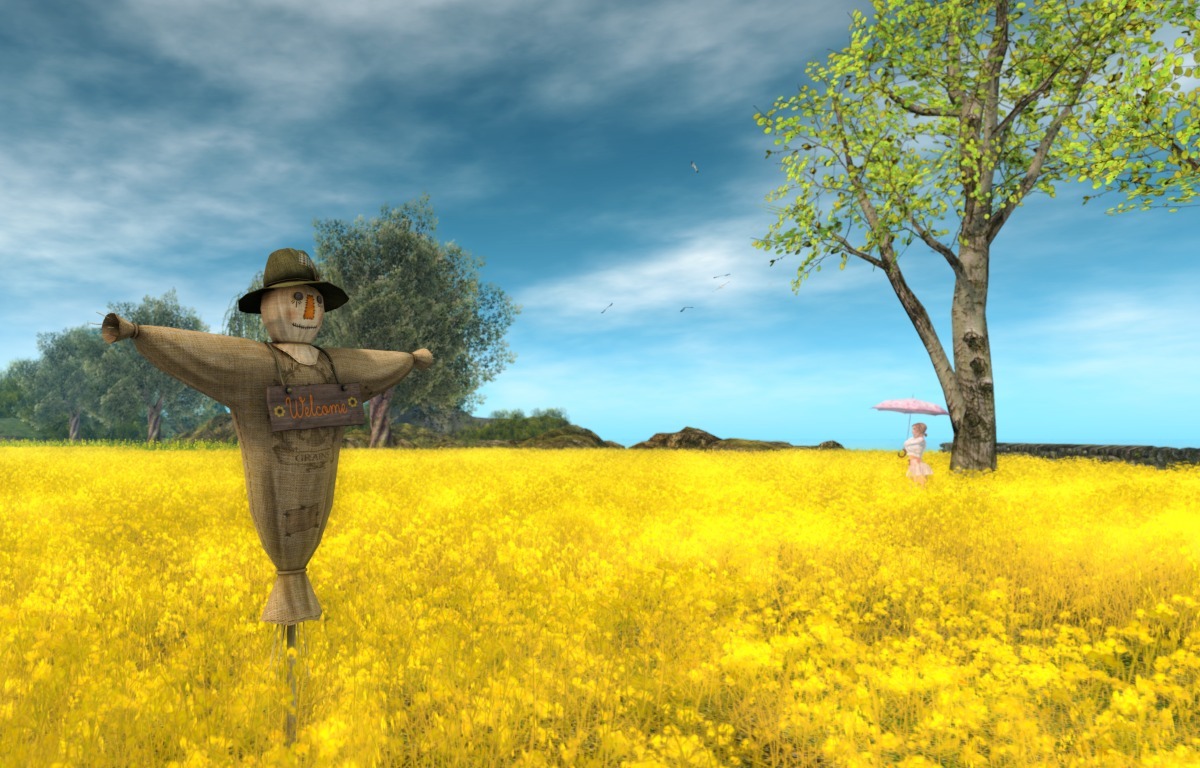 A woman visiting the field of yellow flowers in Whimberly 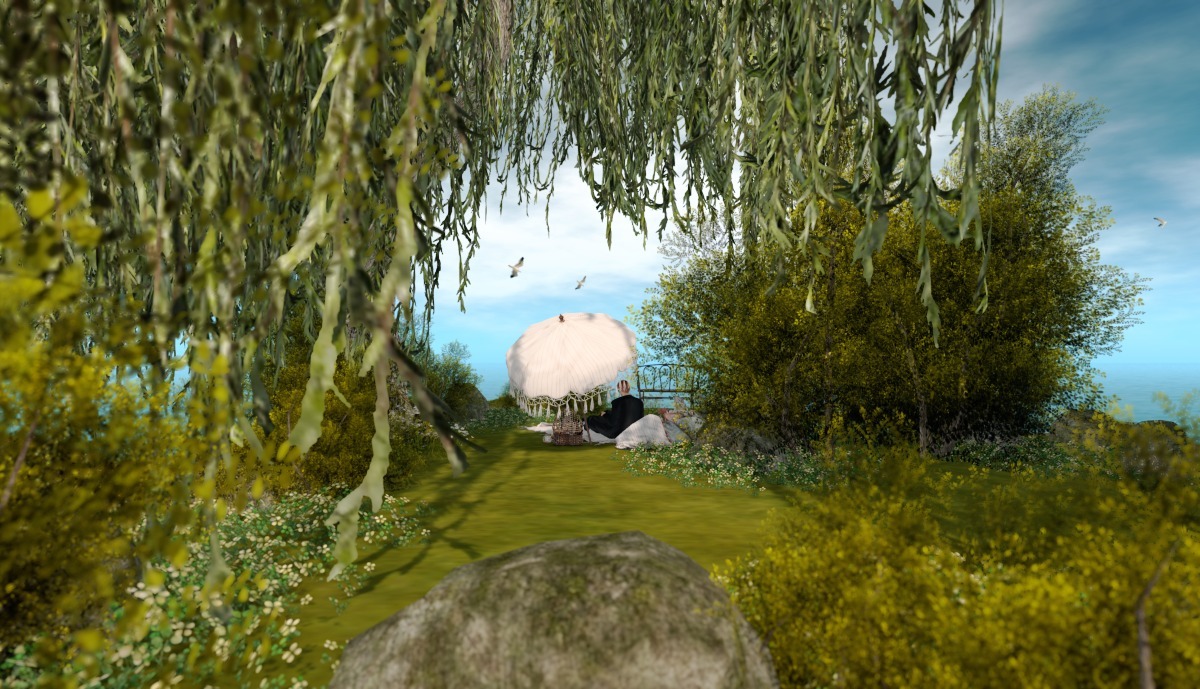 Ricco during a picnic in Whimberly

This is also what we see at The Mill. As its profile says, the place is “inspired by a Danish vacation island” (I don’t know whether a particular one or just the generic idea of an island in Denmark). The sim looks like a rural beach, if we can say so, with horses and cows, a shepherd leading his sheep somewhere… In such an environment, there seems to be more contact with natural elements, such as water, gentle wind, trees, flowers and birds. 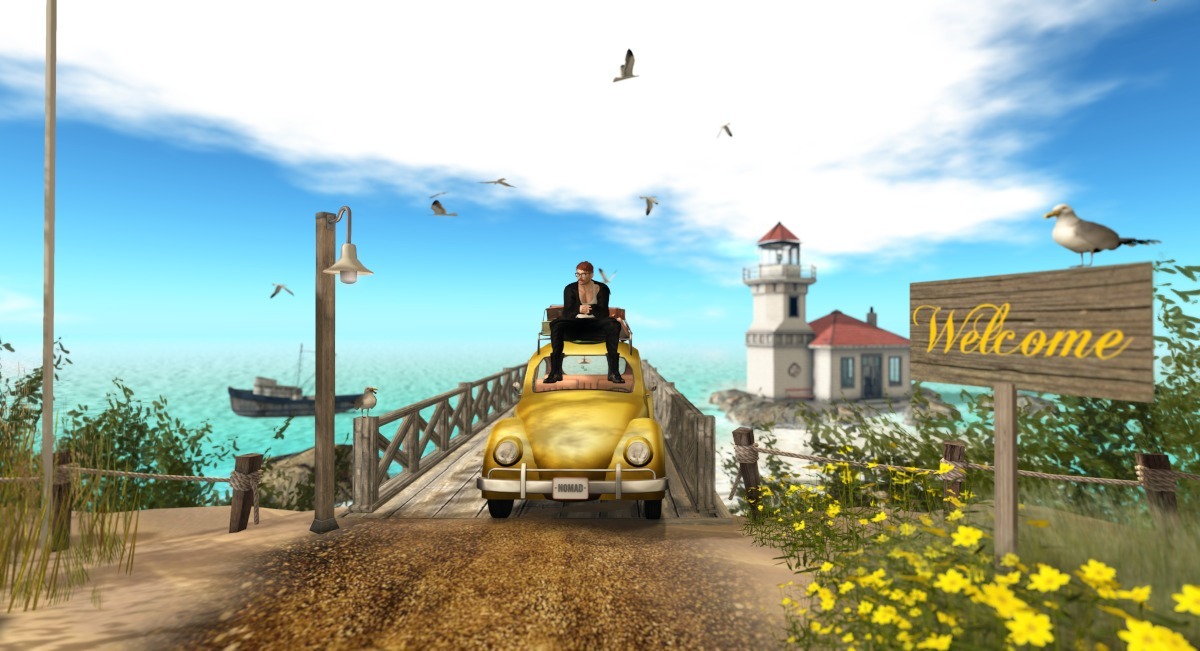 Arriving at The Mill 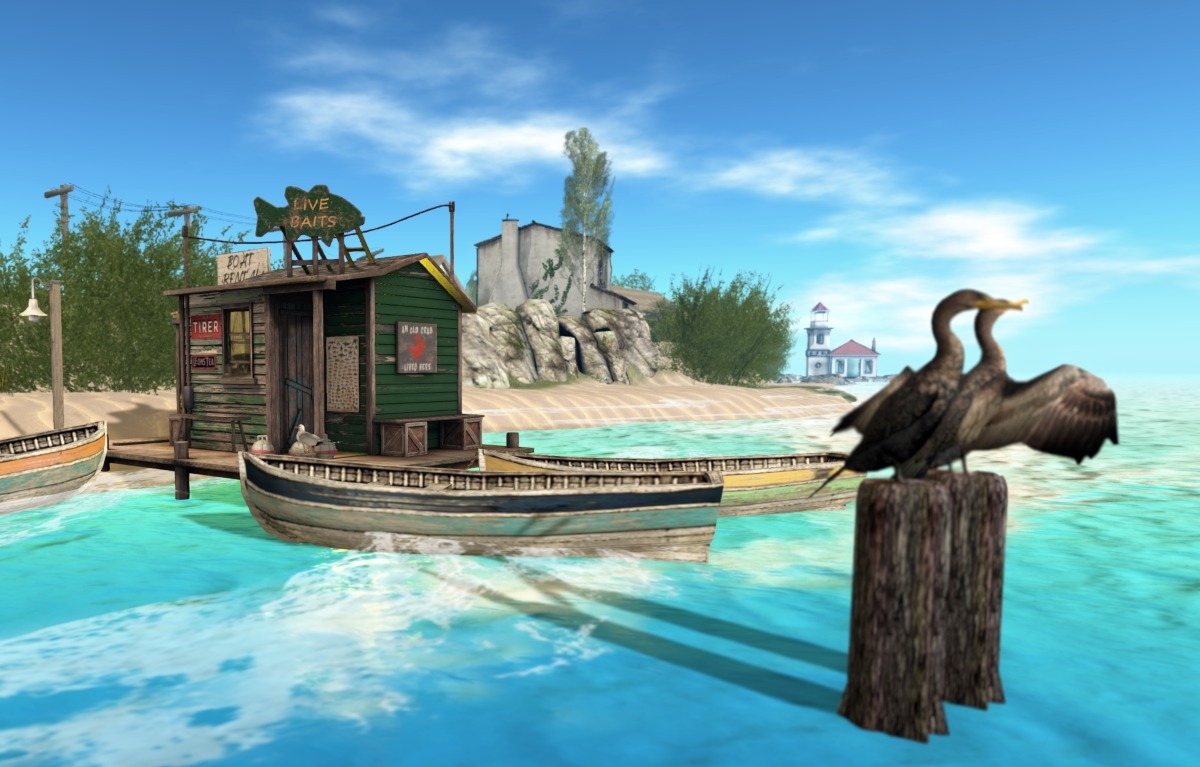 The Mill: boats and birds 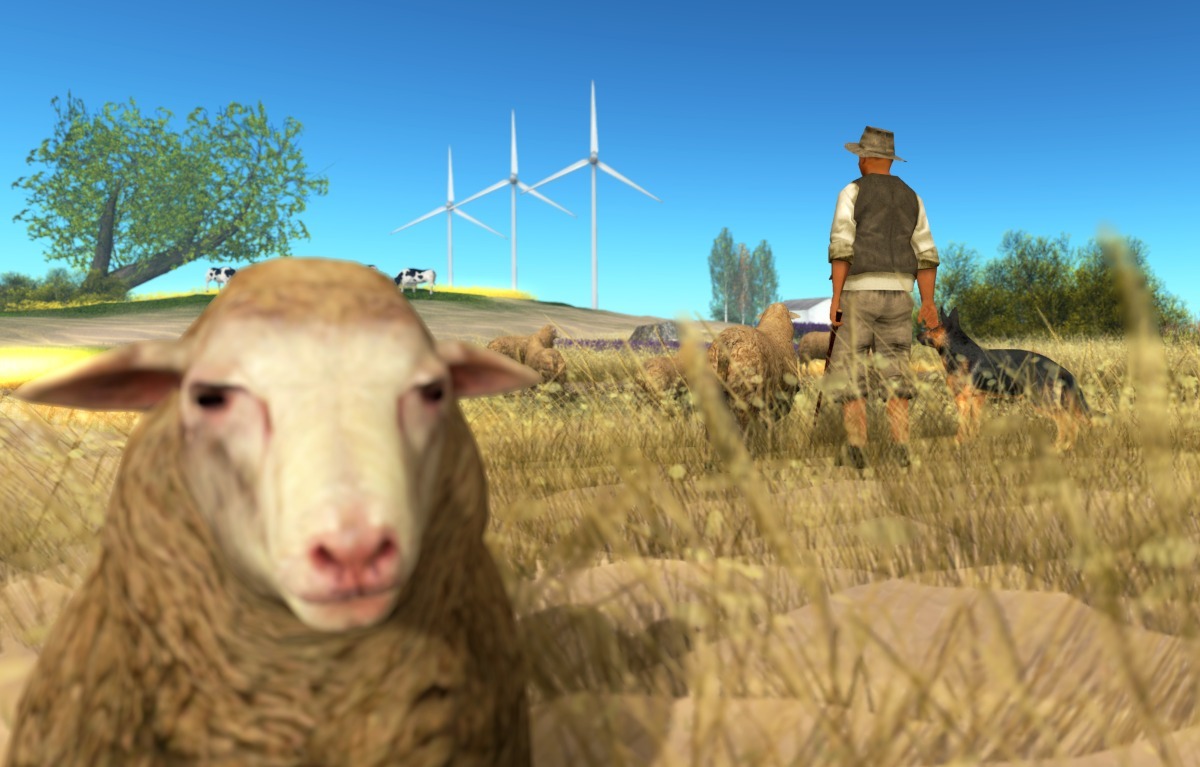 Shepherd leading his sheep at The Mill

To a great extent, what makes sims like The Mill or Whimberly a tool to help building tranquility is the idea that they carry of contact with nature. And it’s curious to notice that there’s been some evidence out there that both the direct contact with nature and the visual representation of it, such as pictures of calm natural landscapes, have similar effects (though maybe in different degrees). I don’t know of any research measuring the influence of virtual representations of nature, such as those found in Second Life, on inspiring calmness in people – but, if photos help to build tranquility, we could maybe reach an equivalent result by resorting to virtual reality. And, why not, by means of seeing pics of virtual environments – which may explain why so many of us like to take shots of those sims in SL. 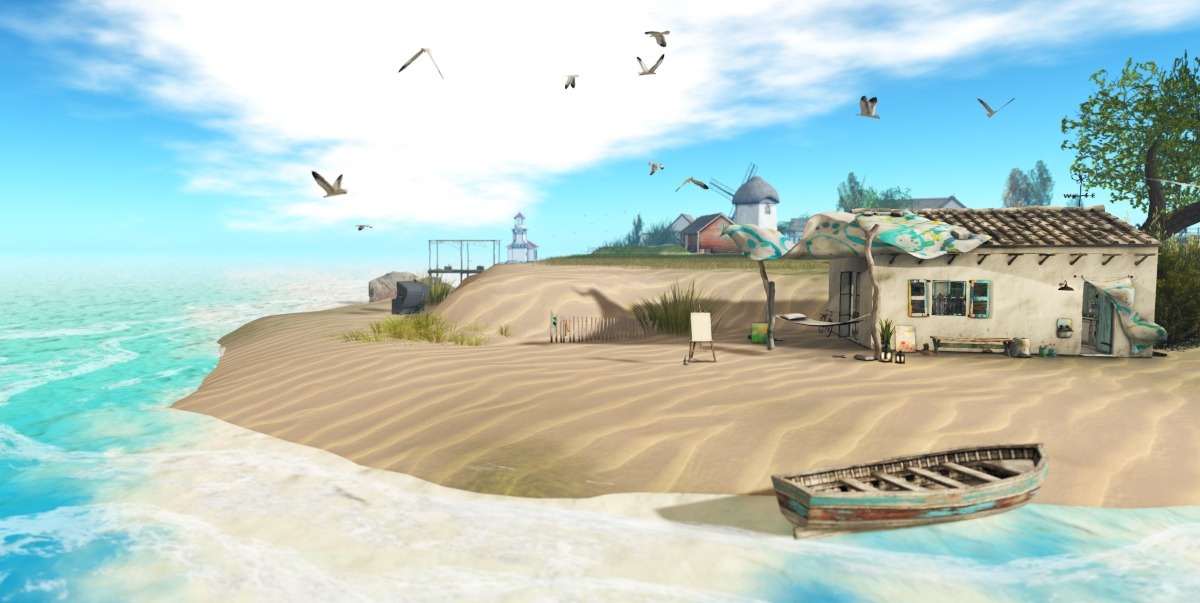 A house at The Mill’s beach 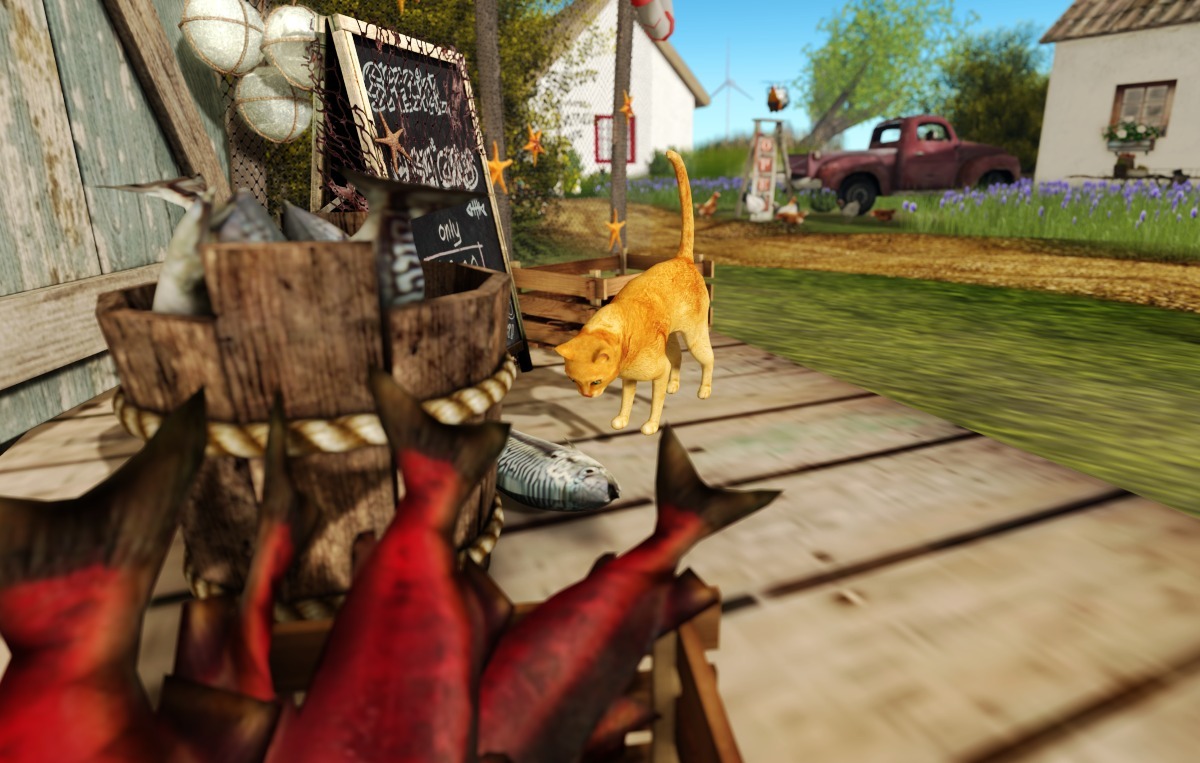 Cat and fish at The Mill

I would also risk to say that having (man-made) representations of man-made buildings in those sims, together with the (man-made) representations of natural items, plays a double function. On the one hand, it helps creating visual points of interest, as I said before, especially for pics: sometimes, in a more open space, the landscape gets lost if our camera cannot focus on something specific. That specific thing may be a bird, a person, a particular geological formation, but in many cases it may also be a house or a windmill, for instance. 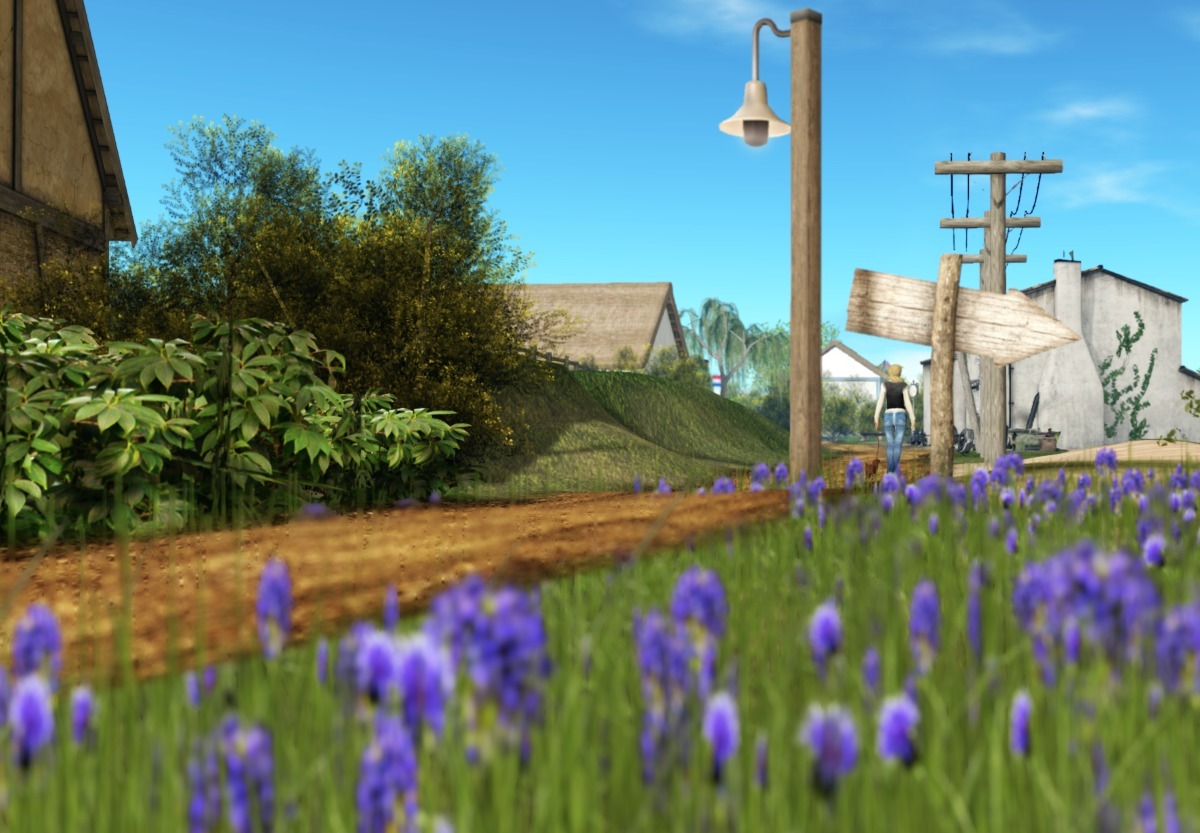 Walking around at The Mill 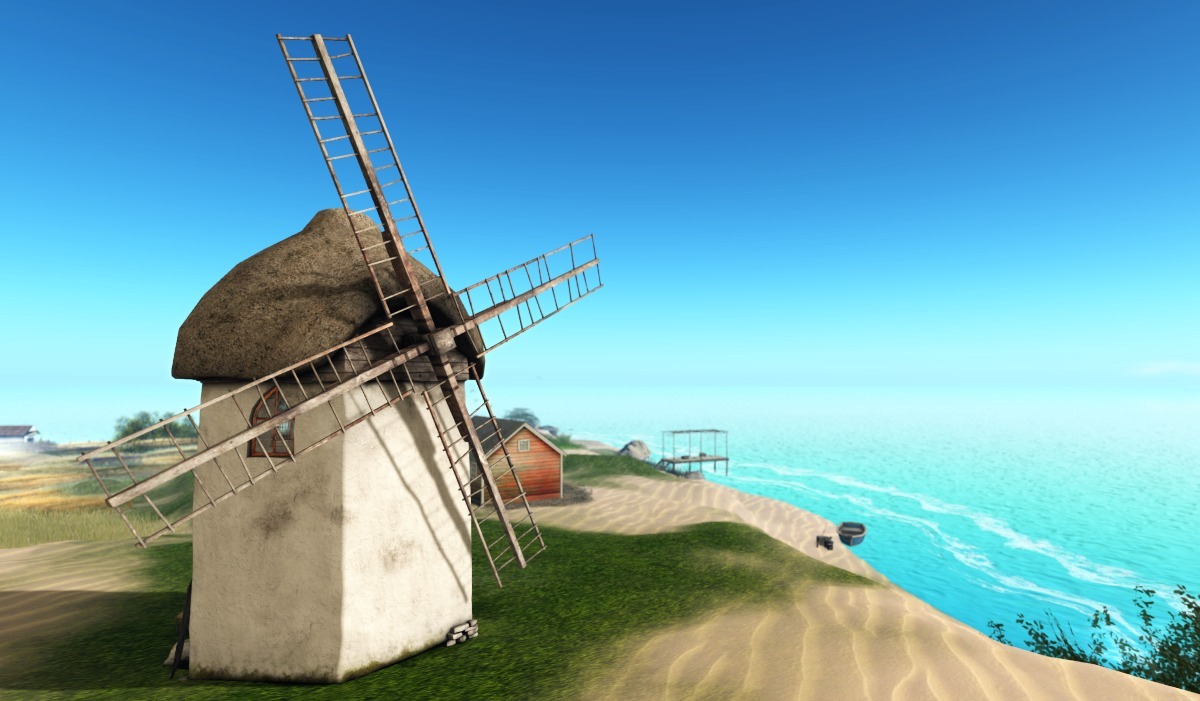 Windmill at The Mill

On the other hand, when we are talking about tranquility, it’s worth noticing that our idea of nature may differ a lot from actual nature. Though a picture of a field of flowers may look like a tranquil landscape in our minds, being in the middle of flowers could in fact result in an allergy crisis; laying on the grass could culminate in an attack by ants; calm winds could become stronger and bring storms with them. So, even if all those things may still happen, having man-made buildings in places like those can feed the illusion of a domesticated landscape, without those risks – as if humans would dominate nature and eliminate its unwanted features. 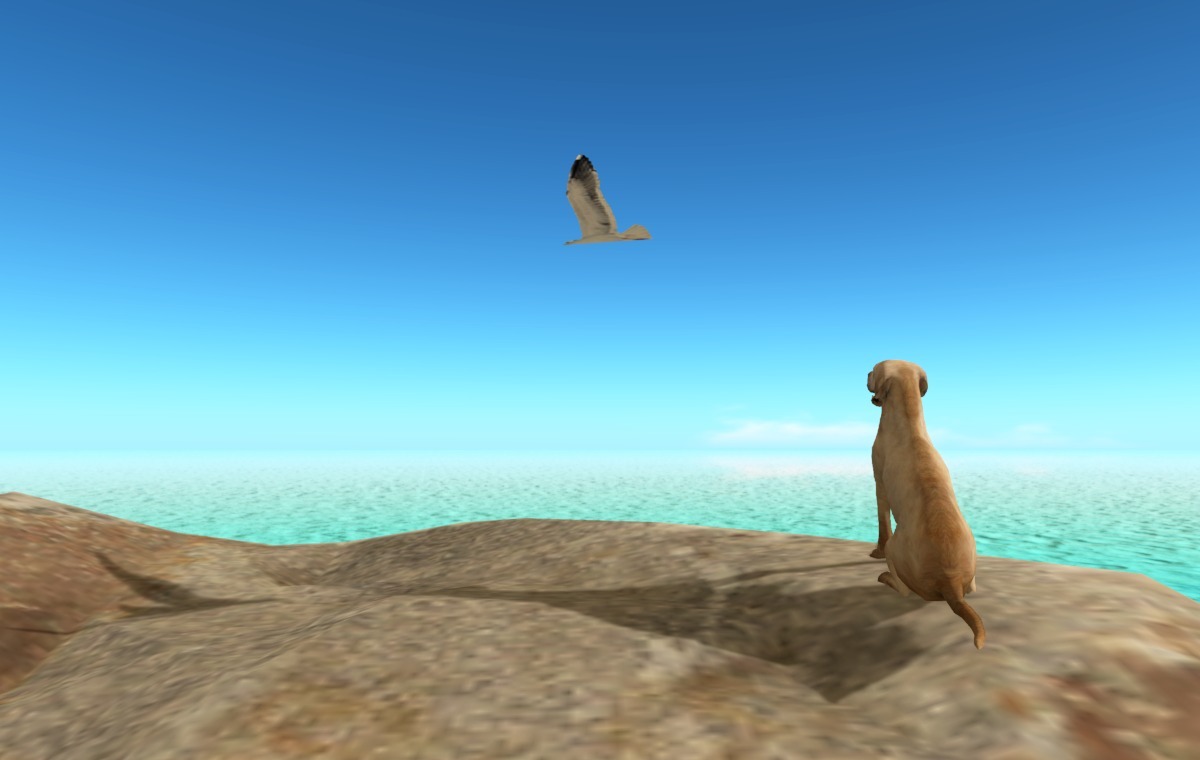 The Mill: a dog watches a bird 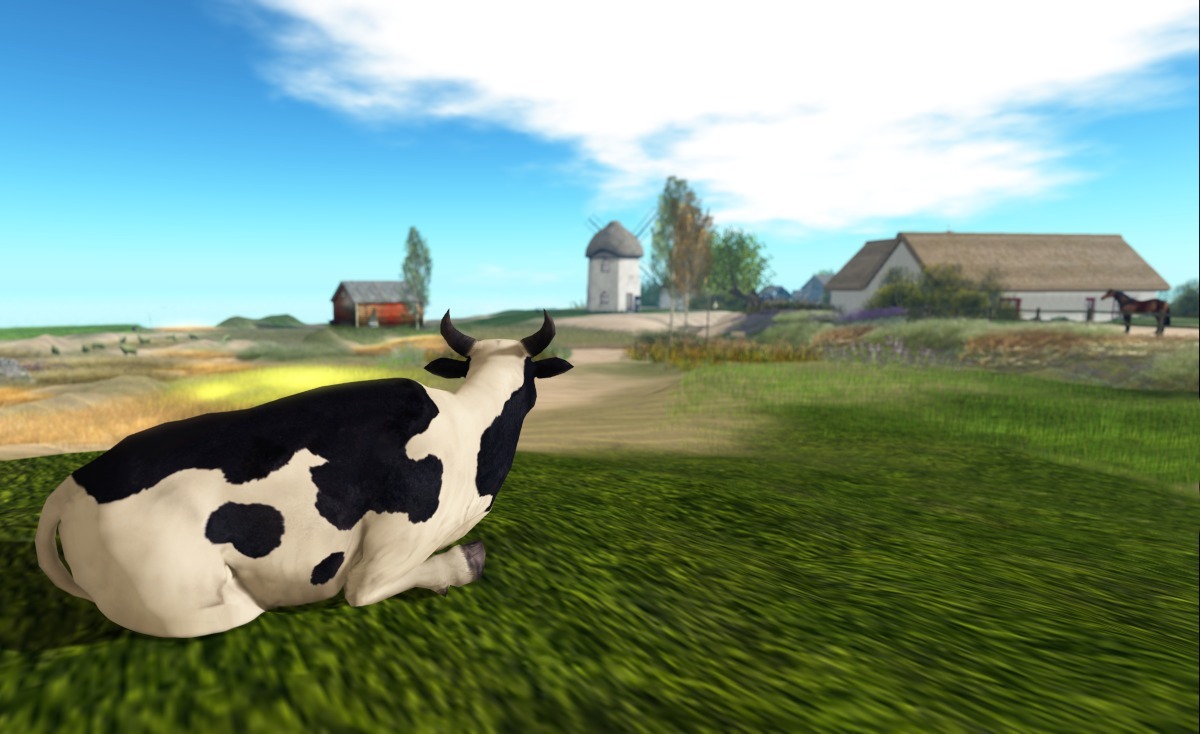 A cow resting at The Mill

Of course, in a virtual environment like Second Life, it’s actually all man-made: natural landscapes are 3D constructs that won’t have any of those unwanted items (unless one really wants them for some effect). Still, placing representations of human-made buildings in sims like Whimberly or The Mill could function as a reflection of how all that works in our mind – if my hypothesis is right, of course. 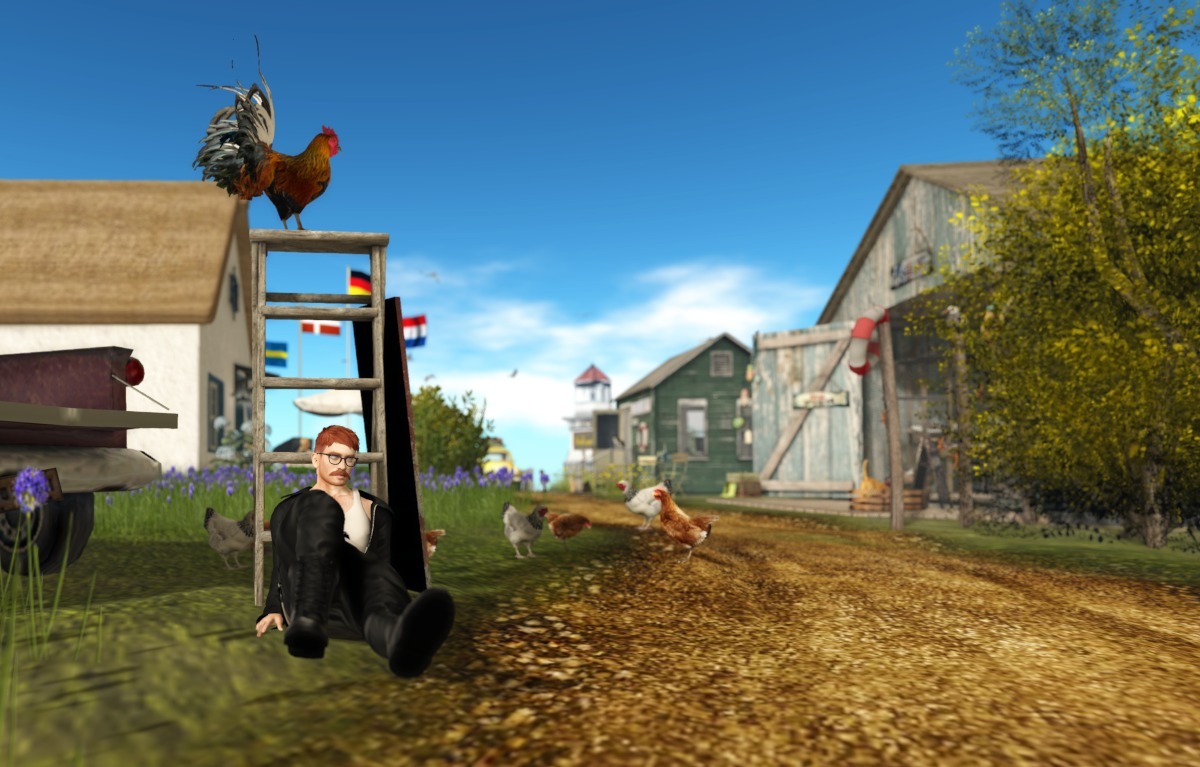 Ricco taking some time to rest at The Mill 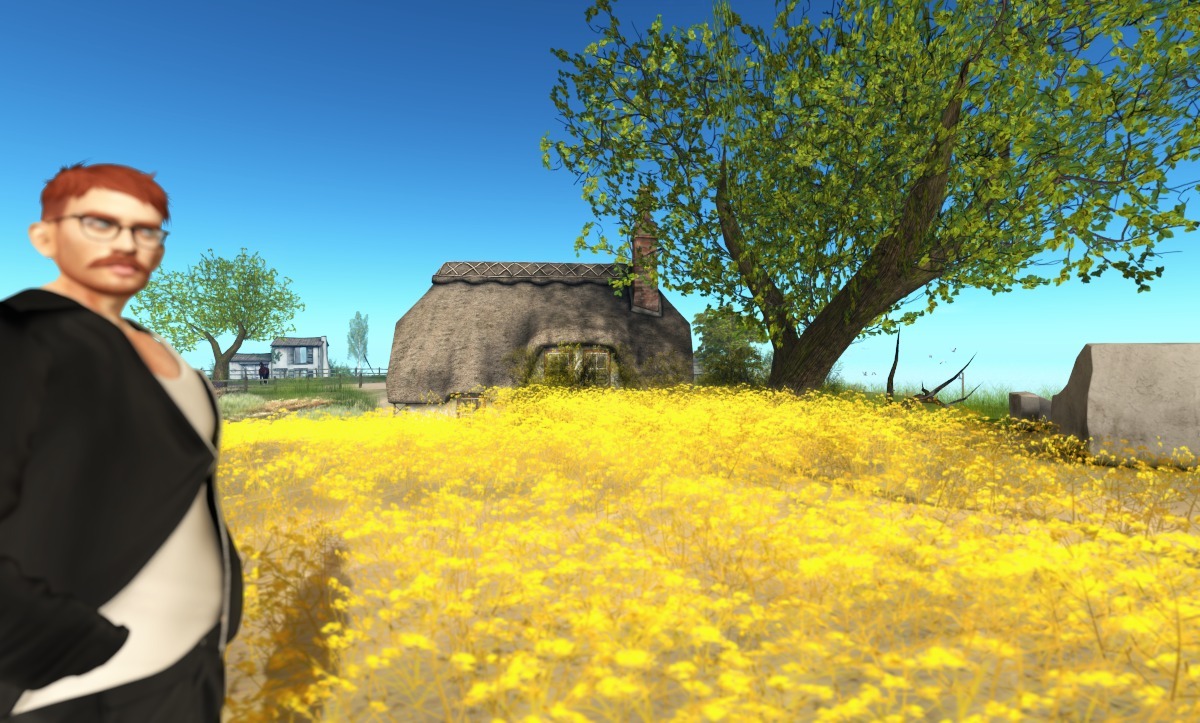 Ricco at the flower field at The Mill

The popularity of rural sims in SL could be, thus, not only due to the beauty that they carry with them. The fact that they display both natural and human-made elements in a certain balance may contribute to making them an instrument of relaxation, of easing tensions, of relief – which may help explain the trend that those sims represent in Second Life. After all, if tranquility means some detachment of the normal routines of first life, why not searching for it in SL? 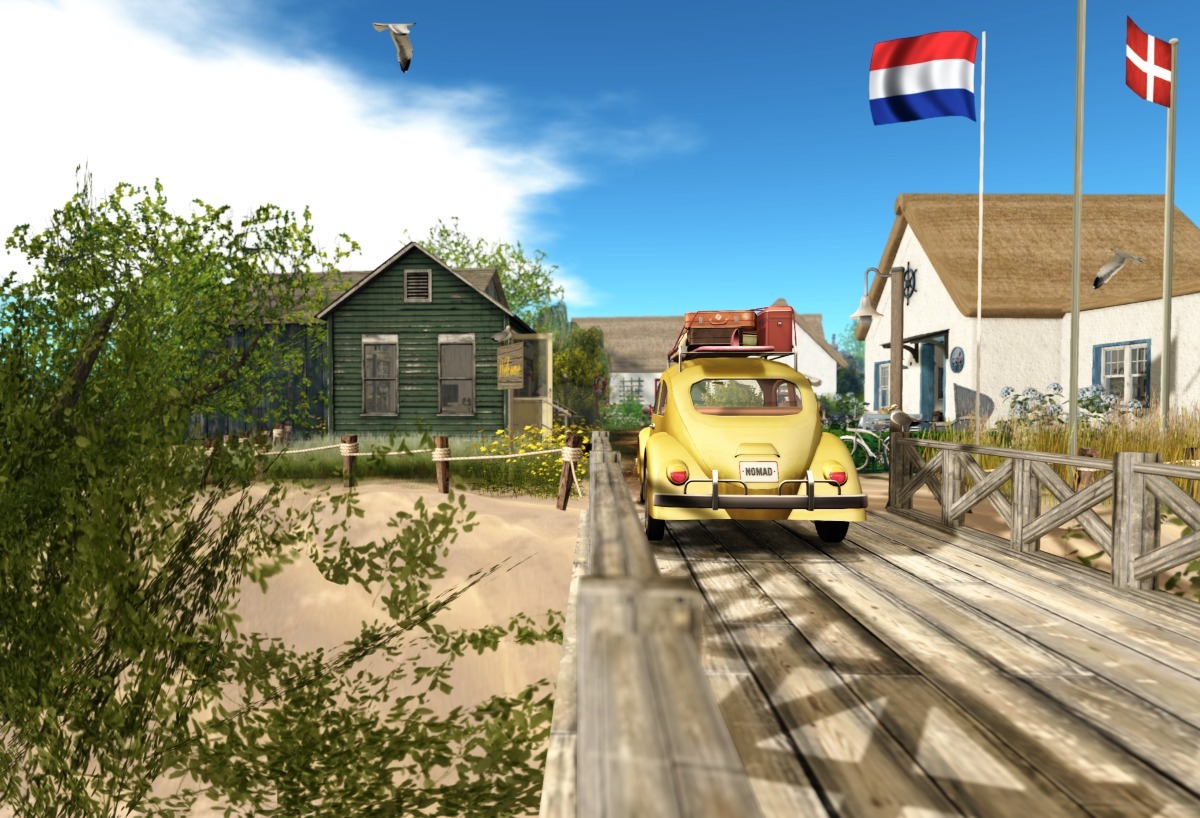 The Mill: the arrival point, fom a different angle