UPDATE on Jan 15th: Linden Lab announced that the problem has been solved, as Inara Pey mentioned in a comment below.

In my journey through Second Life’s grid, I found last Friday, January 11th, a protest organized by Tinies at Governor Linden’s Mansion. They were demanding that Linden Lab fix a bug that has been affecting hover height in general, but which has been particularly bad for short, small avatars.

Tinies and other avatars protesting at the mansion

The place chosen for the demonstration was significant: built in 2002, the mansion is an example of architecture in early Second Life, completely based on SL native prims; and in the basement, it shows pictures of old times, the world map back then and images of those days when the grid was known as Linden World. The sim was packed when I arrived, and adjacent sims were getting crowded, which means that the protest attracted a significant number of avatars. 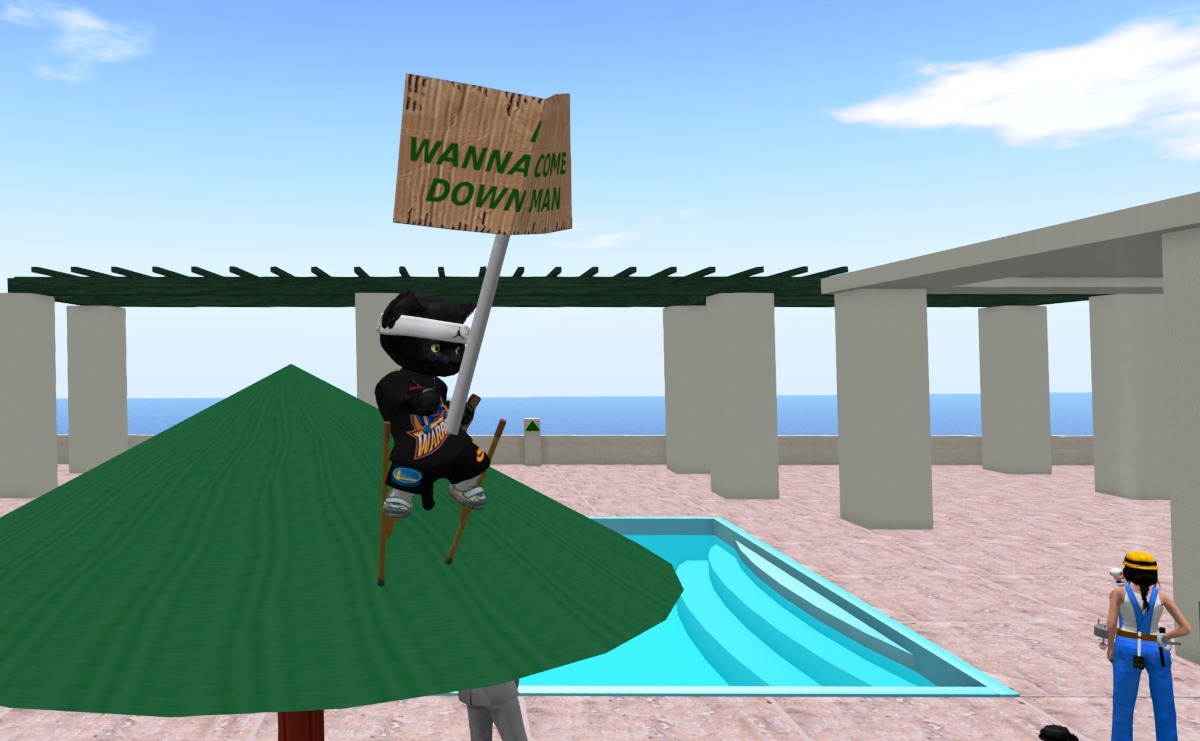 “I wanna come down”: problems with hover height motivated the demonstration

Though SL is not – and it’s not meant to be – a democracy, demonstrations are a tradition in its domains. In this sense, this long living virtual world by Linden Lab is a particular walled garden: one where you can join forces with other members and mobilize the community to actually gather, even if only virtually, showing signs and marching for your causes. 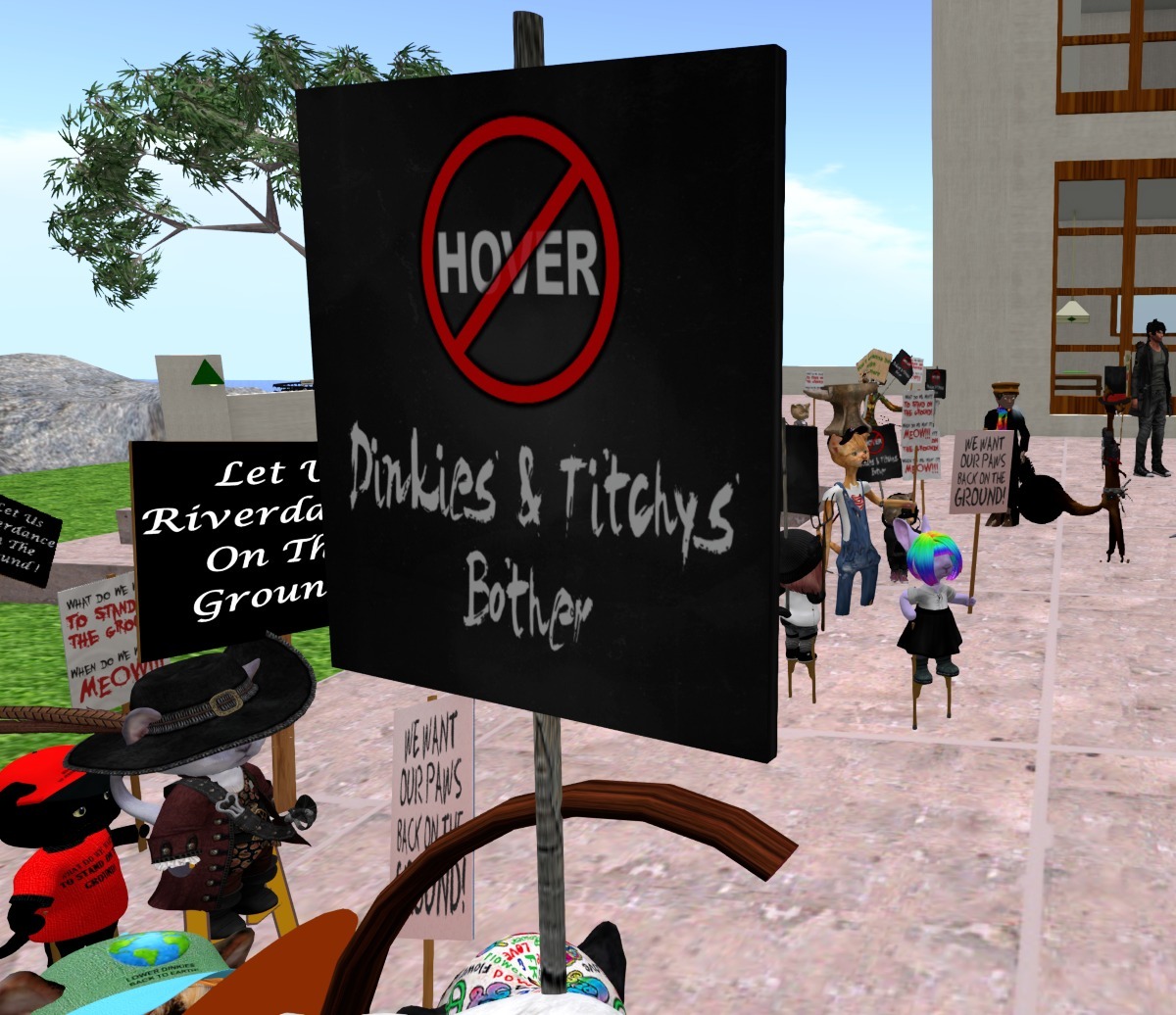 That’s why a protest in SL is, for me, a stronger experience, in personal terms, than, for example, those of enlarging the outreach of a protest post in a social network. Even knowing that probably the influence of a demonstration in SL will be smaller, I feel more involved in the manifestation.

In the tradition of demonstrations in Second Life, we have seen a wide range of causes. There have been avatars marching for labor conditions in enterprises that used to be present in SL; against the increase of Openspace (remember it?) tier fees; against violence in Gaza; for tax reduction in the US… And they have gathered in Ahern, Natoma and a number of other significant places on the grid.

Among the most overwhelming demonstrations I remember was one of solidarity, when residents gathered in the virtual Paris 1900 and its Eiffel Tower following the terrorist attacks of November 13th, 2015, in the real life Paris. In that occasion I saw people from all around the world standing for the victims of that abomination and showing strong disapproval of violence and terror. 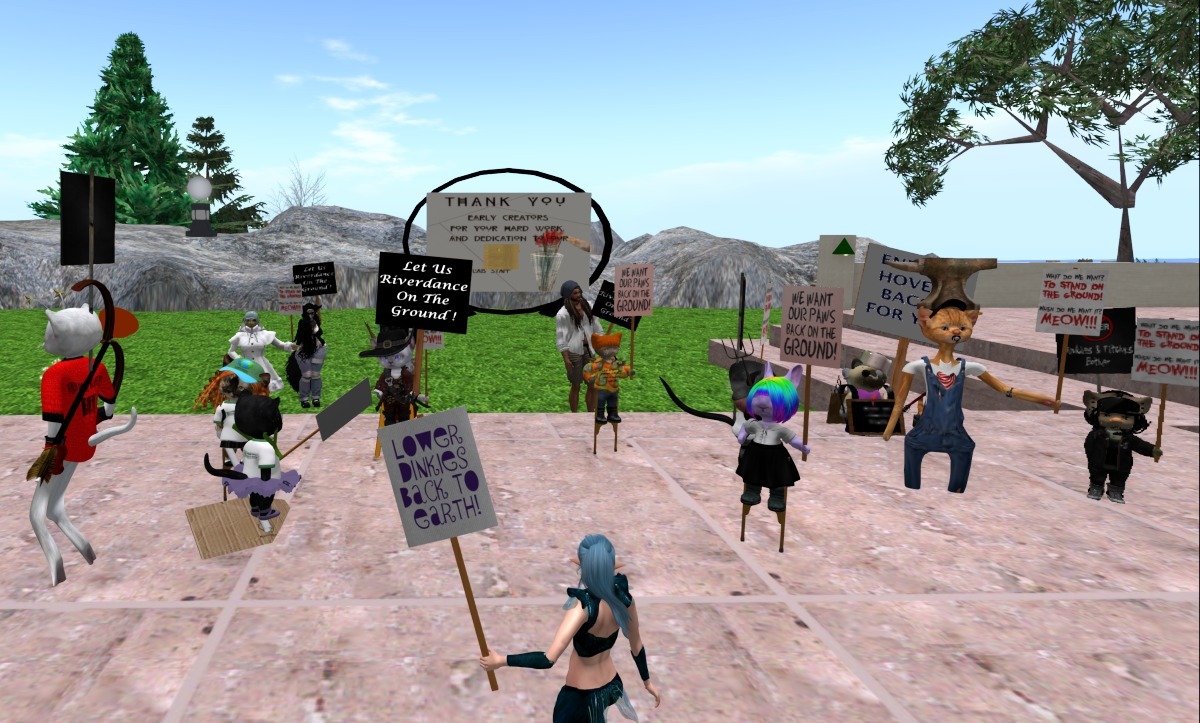 Demonstrators at the historic site

The protest by Tinies and other avatars on Friday was not a small one, and, also because of that, it was a reminder to me that community is there, in SL. Not only the sense of community, but the actual community acts and performances: people still care enough to join forces and fight for what they believe – and it wasn’t only hover height that was at stake, but the demand that Linden Lab address the concerns of their public.

13 thoughts on “For hover height, Tinies gathered in a protest that was far from being tiny”