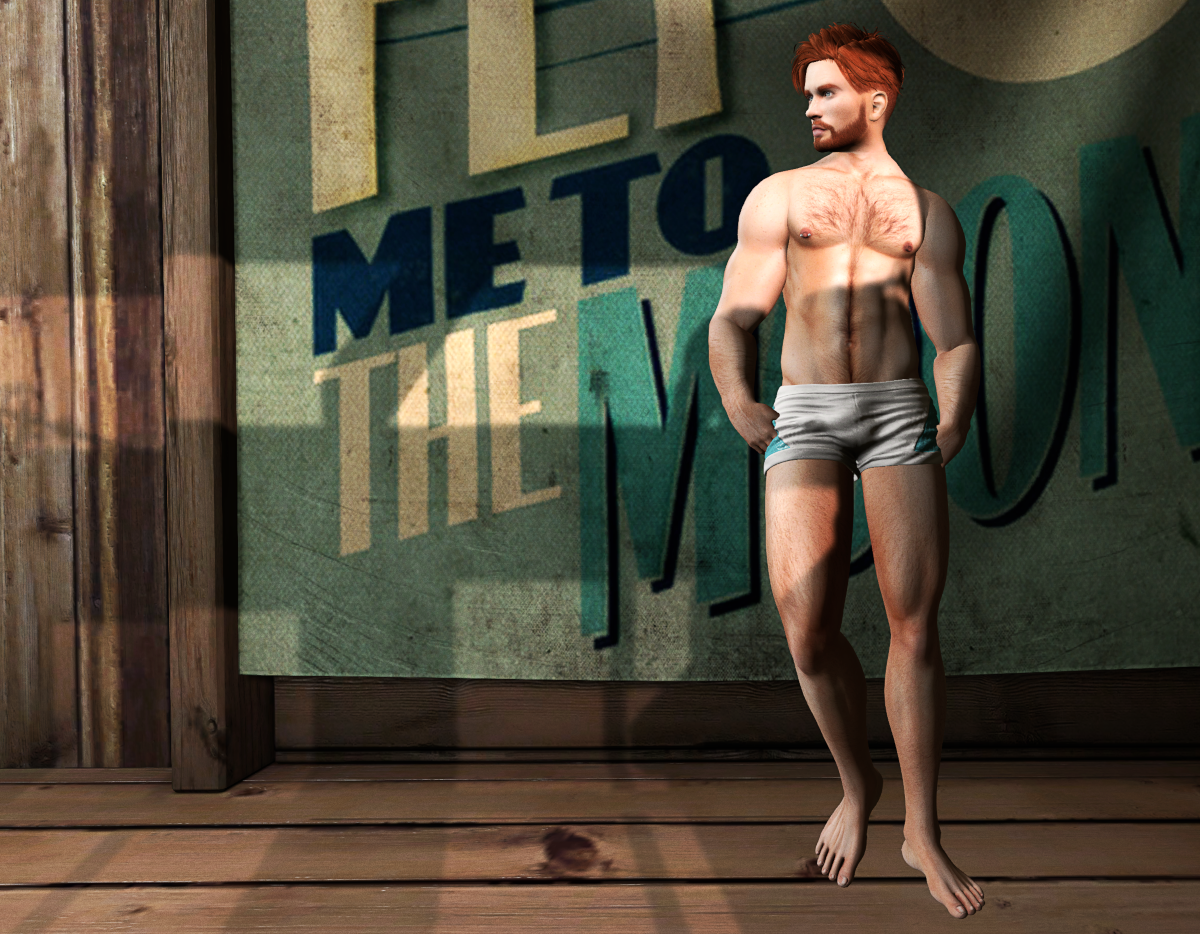 Ricco and his new shape: body shape in SL is a way to express or represent oneself

The market for shapes in Second Life has gone crazy (or maybe it has always been crazy and I hadn’t noticed): prices vary from around L$ 100 up to L$ 1,500 – and I’m not counting either freebies and dollarbies or some that may cost even more than L$ 1,500, but seem to be exceptions on the SL Marketplace’s website. The range is particularly difficult to understand, because of the characteristics of the product, and I’m going to elaborate on it. Still, I’ve read somewhere (I can’t remember where, so I can’t quote it, sorry) that the shape market got a new impulse from the advent of bento mesh heads. At the same time, I was in the process of changing my own avatar, for I bought a new mesh head, hence the subject called my attention. 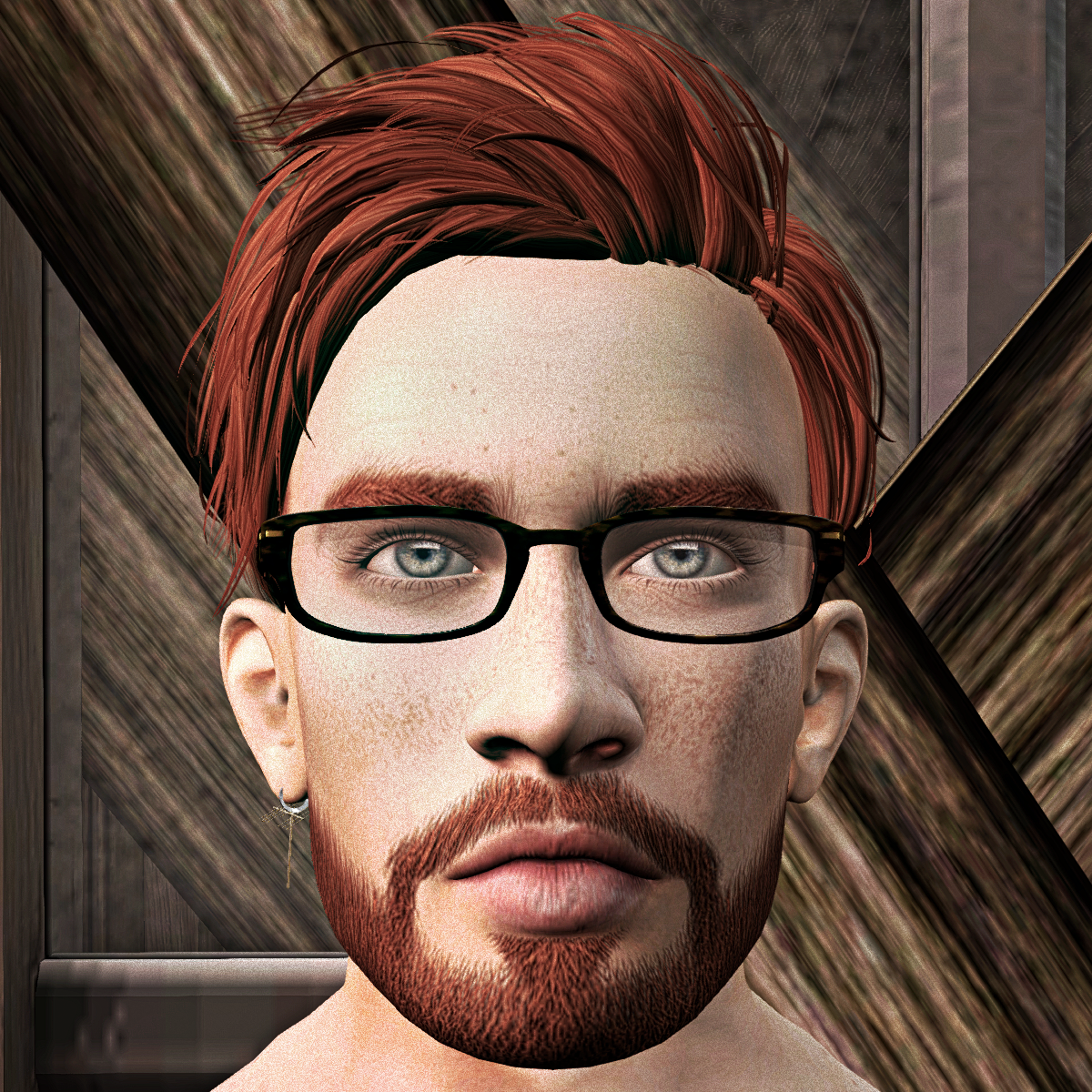 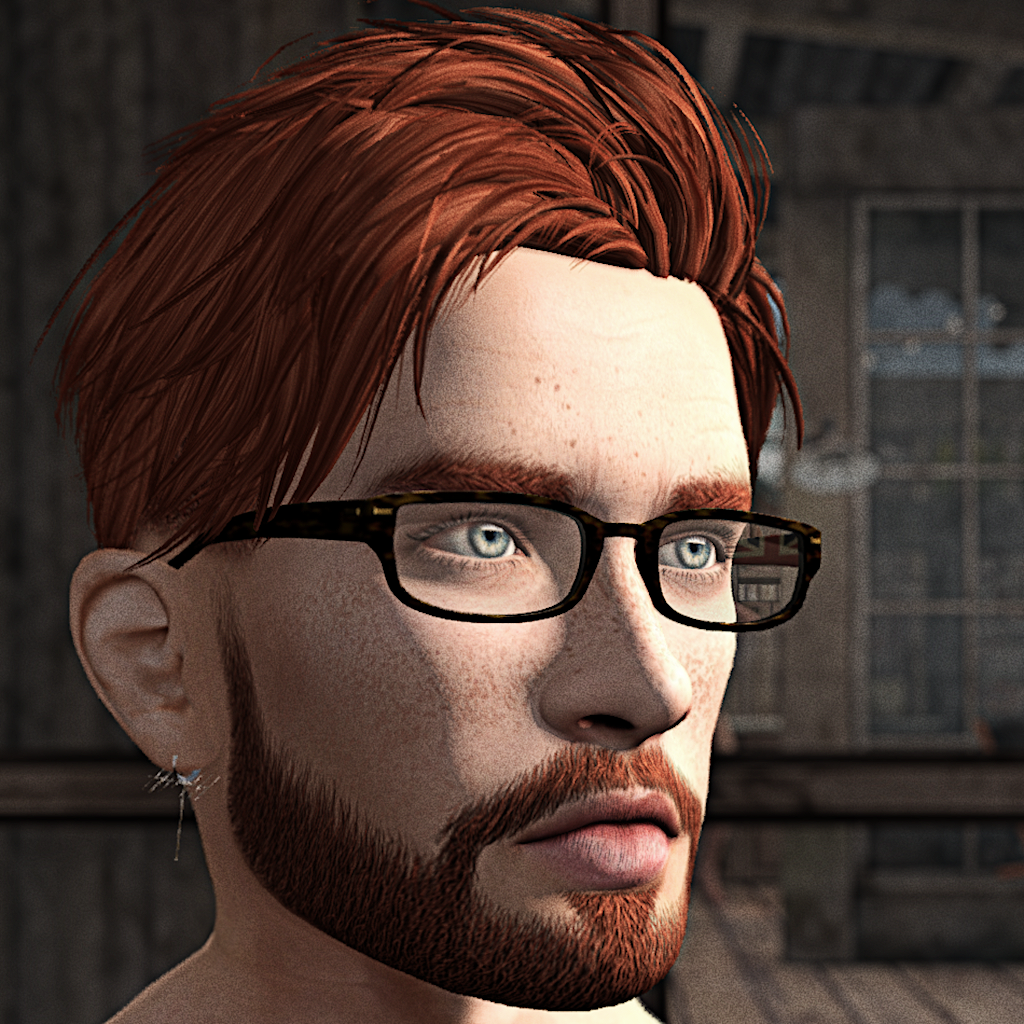 Shapes are a very particular product. They are not (virtually) tangible items, such as buildings, vehicles, clothes or even mesh bodies – items that you can rez. Their intangibility, though, is different from that of a script, for instance. Scripts give us different results: they open doors, activate poses, move stuff… In a way, shapes are a bit like animations, for they reveal themselves by means of avatars. We could describe them as a series of “instructions” to be applied to avatars – and that’s how they materialize, that’s how one can finally see them, for they cannot be rezzed on their own and they won’t affect other objects. 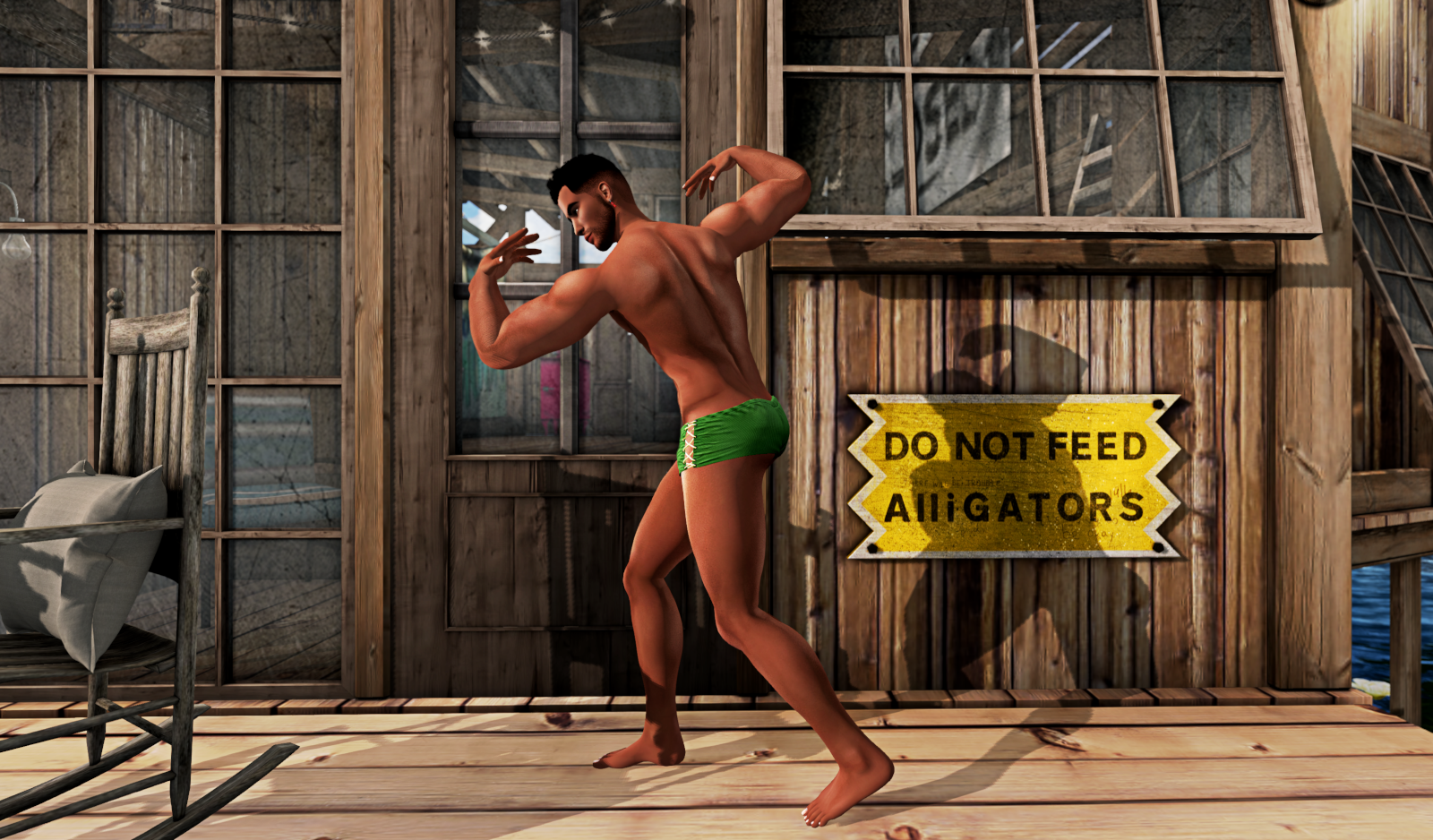 Randy Firebrand shows off his shape too…

Differently from animations, though, shapes are a very basic characteristic of avatars within the SL viewers’ structure. I mean: the viewers for Second Life give you the ability to customize your avatar by means of changing your shape, and that’s a feature that is easily accessible to every resident. It’s not the same for poses and animations: the viewer itself doesn’t give you the ability to build entire animation overrides to change the native duck walking anim, for example – but it does allow you to modify your avatar’s shape, even if you are new to the game. 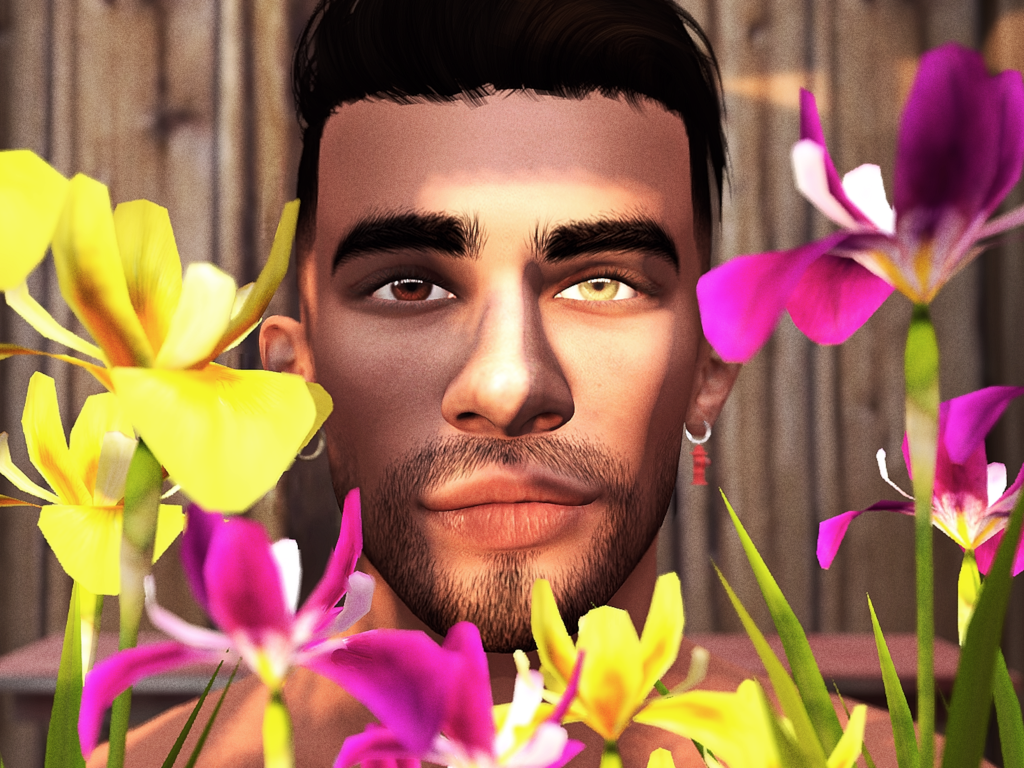 … and how it molds his head: a different shape from Ricco’s

Of course, one may not be good with having to deal with all the sliders for editing shape. In a handful of cases, they are not obvious. I can have lots of fun with that, but some people may get frustrated, that’s perfectly understandable. Second Life is not easy, we have heard it many times, and shape editing may be part of the difficulties that one finds in their virtual life there. Then, it may make sense to buy a ready-made shape that one particularly likes. 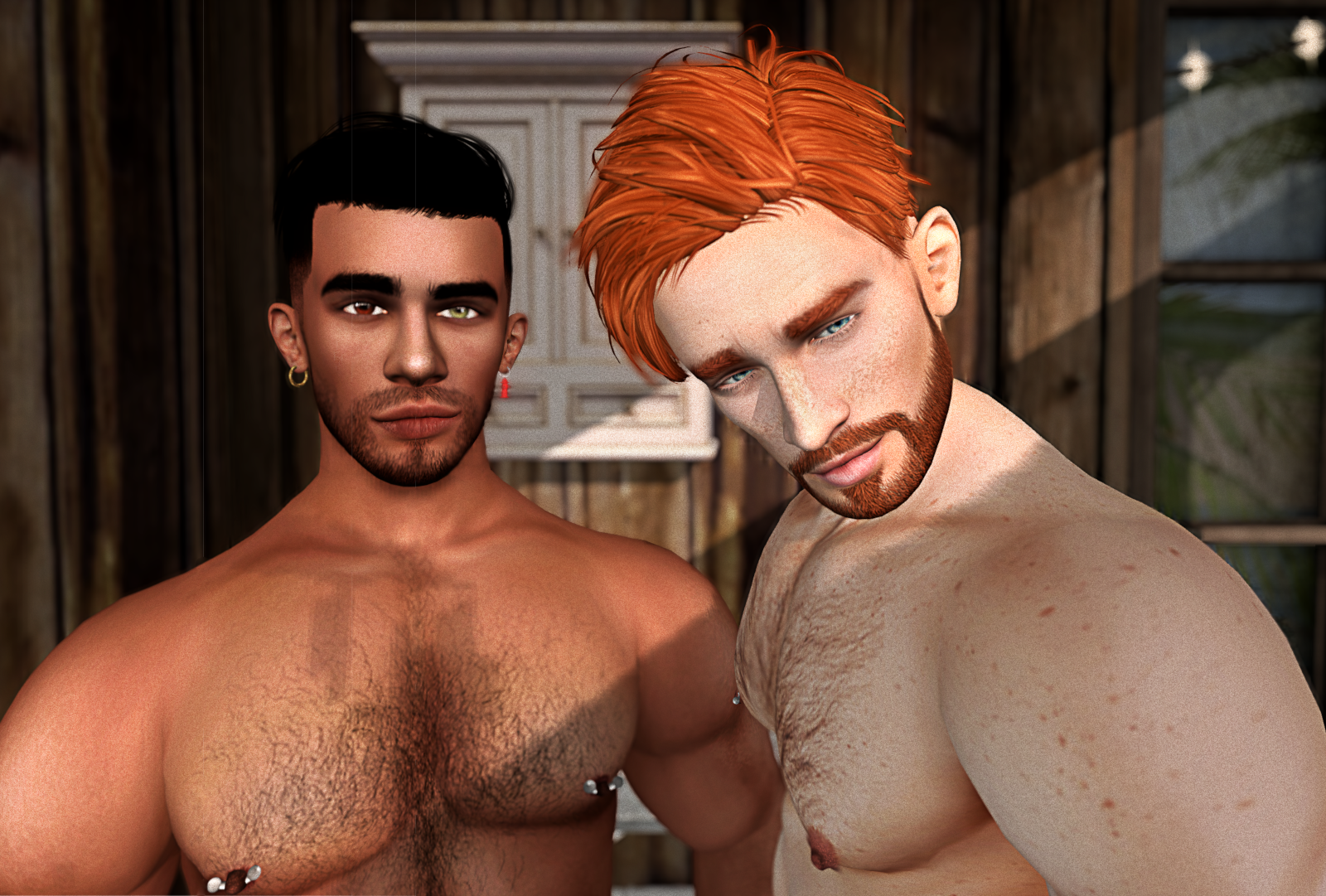 Randy and Ricco: same head model, not the same shape

For those who are willing to buy them, shape makers spend their time producing new shapes. It may require dedication and experience in order to create a number of different shapes that will look good – and now, some investment too, for one has to deal with making shapes that look good with this or that particular bento mesh head and body, which means that they will need to test their creations on those items. 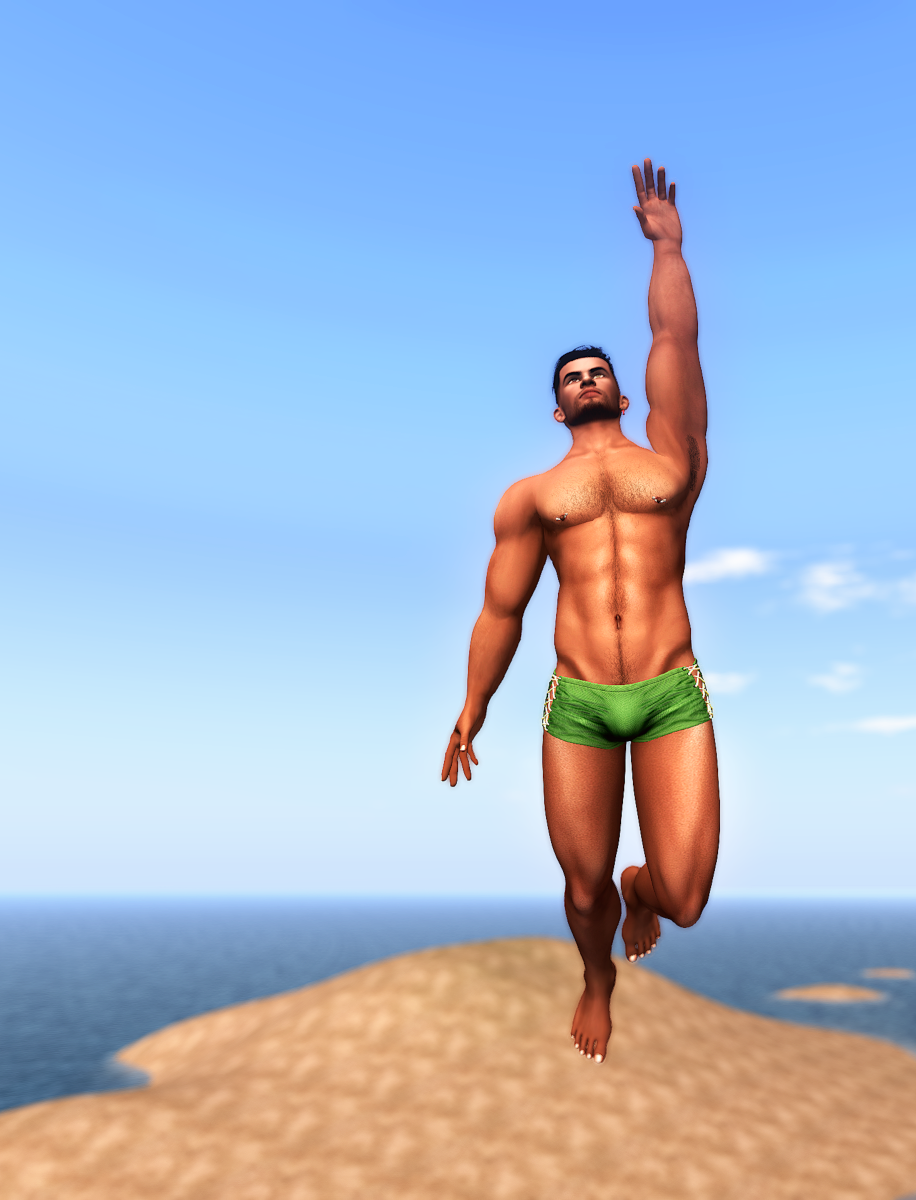 Nonetheless, it’s difficult to find every item that one may want in a single ready-made avatar shape: one may like that particular butt volume, but not how their nose looks like, or enjoy their legs, but not so much their hands size, and so on. Also, some shapes may work better than others with certain skins. Furthermore, shapes are in the domain of individuality and self-representation: the way one molds their avatar is how they see themselves, or how they like to think of themselves, maybe how they’d like to represent themselves to others – in any case, it’s the way they express themselves on their virtual body. That’s why, even if it seems confusing sometimes, having so many sliders on the shape editing floater actually refines the process of creating an online self-representation. 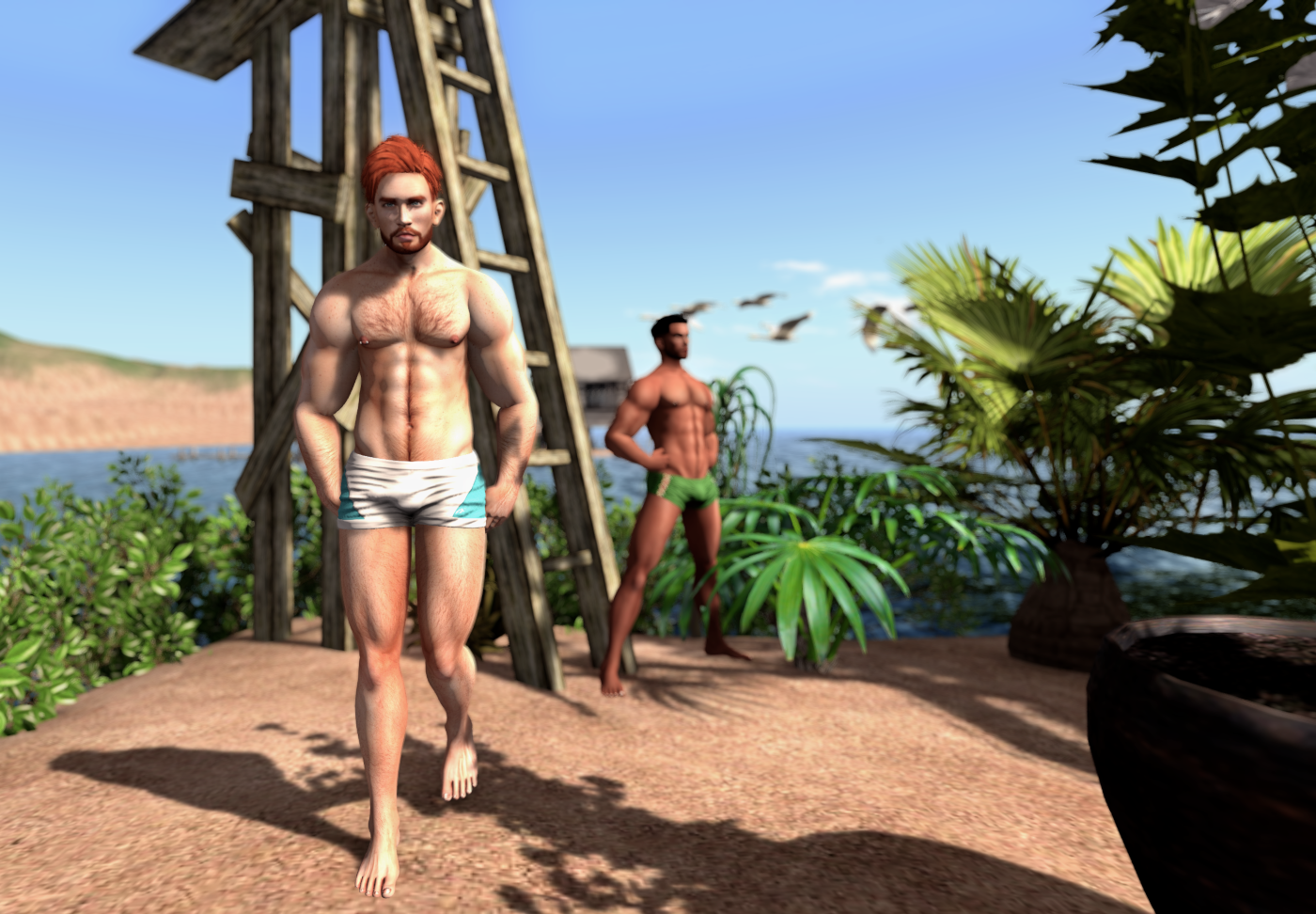 Ricco and Randy: one walking, one standing still

Those problems could be solved by creating shapes that one can modify – and actually, that’s how the majority of shapes in the market are: modifiable. So, if one finds a shape that satisfies most but not all of their expectations, they can still buy it. Editing shape will not be so difficult, then, because one is not creating something from scratch, but making minor changes on a shape that’s already very close to what they’d like. Besides, it’s generally easier to deal with the body editing process than it is with the head one. It means that a consumer can concentrate on finding a good match for their mesh head and then work on their body shape in order to express their individuality. 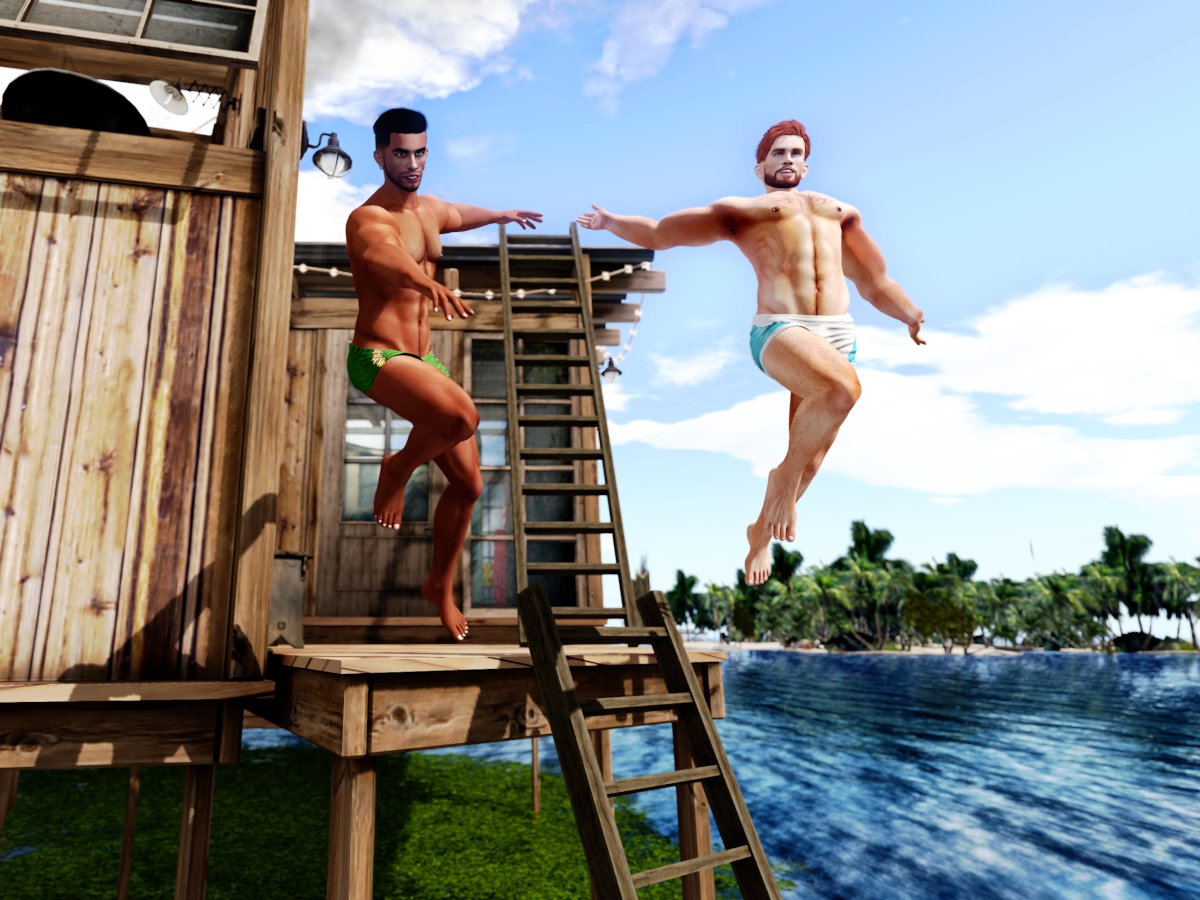 Randy and Ricco jump into the river: shapes in motion

It all sounds perfectly normal, like many other products that are modifiable in SL, but that’s what makes it hard for me to understand how some shapes can be costly. As a product, a shape is a preset for the editing shape floater. If it’s modifiable, then one will be able to view all the parameters that form that preset on the correspondent floater. In other words, one will be able to reproduce it. So, if I like a particular shape that I see on a friend of mine, and if it’s modifiable, I can convince him to pass me his settings and I will have the same shape as he does – and, if I don’t want to look exactly like him, I can then change some numbers on some sliders. Because of that, we arrive to the following situation: modifiable shapes are, in thesis, more saleable, because they are more adaptable to one’s taste; but they can they can be easily reproduced, which makes buying them some sort of waste of money even if the creator is a master in the process of making shapes. If they cost just a few lindens, it sounds ok to buy them. Now, if they cost a lot, why caring to spend on them? 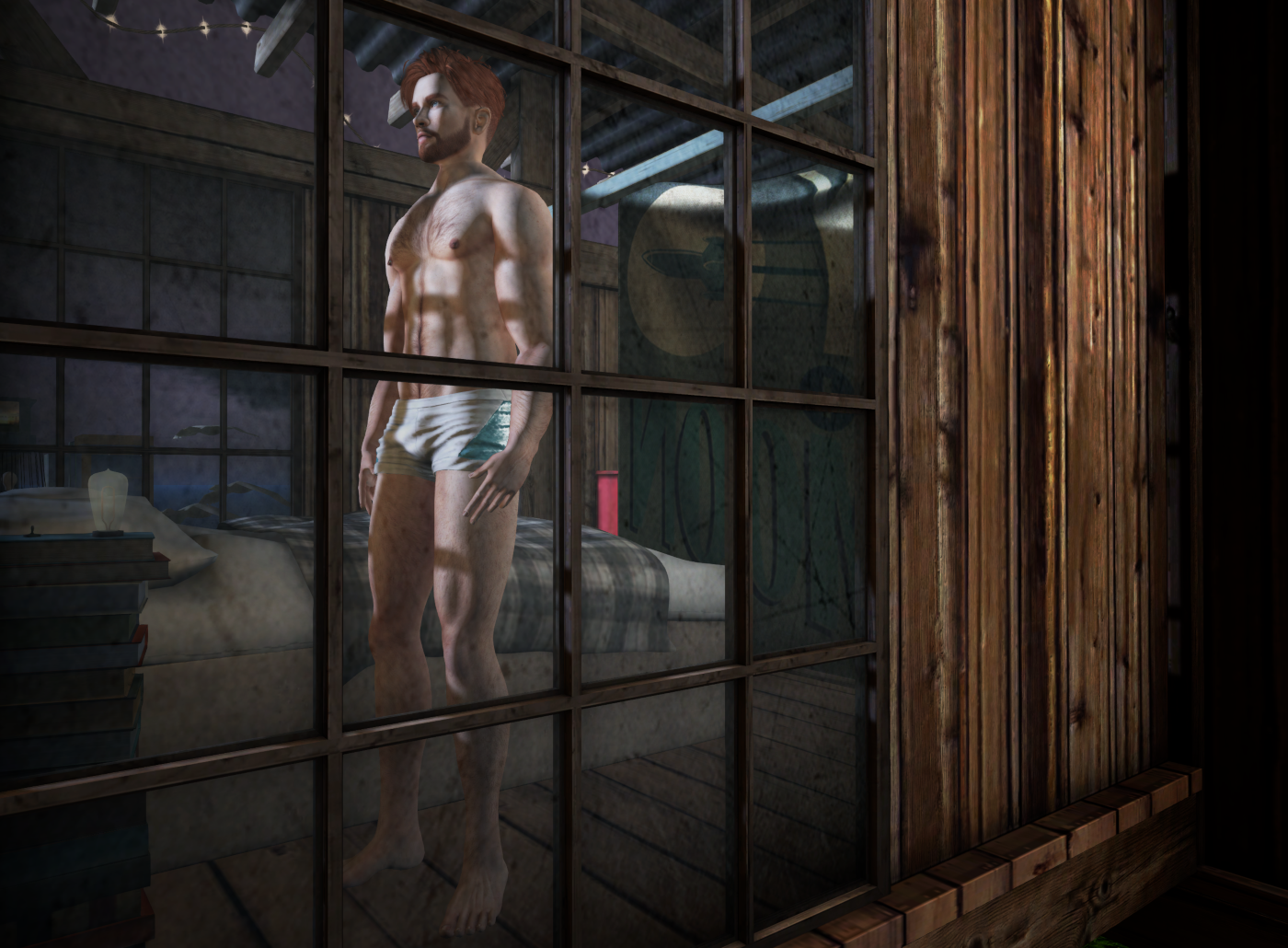 Spying on Ricco to see his shape from another angle

The range of prices in the shape business in Second Life seems to indicate a possible market distortion – maybe caused by consumers not acting in a perfectly rational way (in economic terms). Of course, in order to confirm that, one would have to check if costly shapes are actually being sold in significant amounts. I do not have those data sets. Still, for the number of sellers announcing their modifiable ready-made shapes for a higher price, I would say that the shape market constitutes an interesting case to be examined in the context of the SL economy.

6 thoughts on “Why are some prices so high in the SL shape market?”