It’s time for the new round of The Photo Game exhibition in Second Life – and the artists commenting on each other’s pictures now are… Inara Pey and Proph! As planned, Boudicca Amat and I invited other SL photographers to continue with the exercise of writing some observations about someone else’s photos: how do those photographers look at them, what calls their attention on each image, what details move them, what elements capture their eyes? The new round starts today, March 17, and runs for one month, at the gallery at An Uncertain Destiny. Of course, visitors can contribute with their own observations. Do you agree with the artists? Do you have insights of your own? Don’t be shy, just click on the comments collector engine and leave your message.

As an example of what you will see at the exhibition, I’ve chosen excerpts of Inara’s remarks on one of the pictures by Proph, as well as excerpts of Proph’s comments on one of the pictures by Inara – but if you want to see the other pictures and comments, you will have to go to the the gallery (remember, the exhibition runs until April 17). So, here they are: 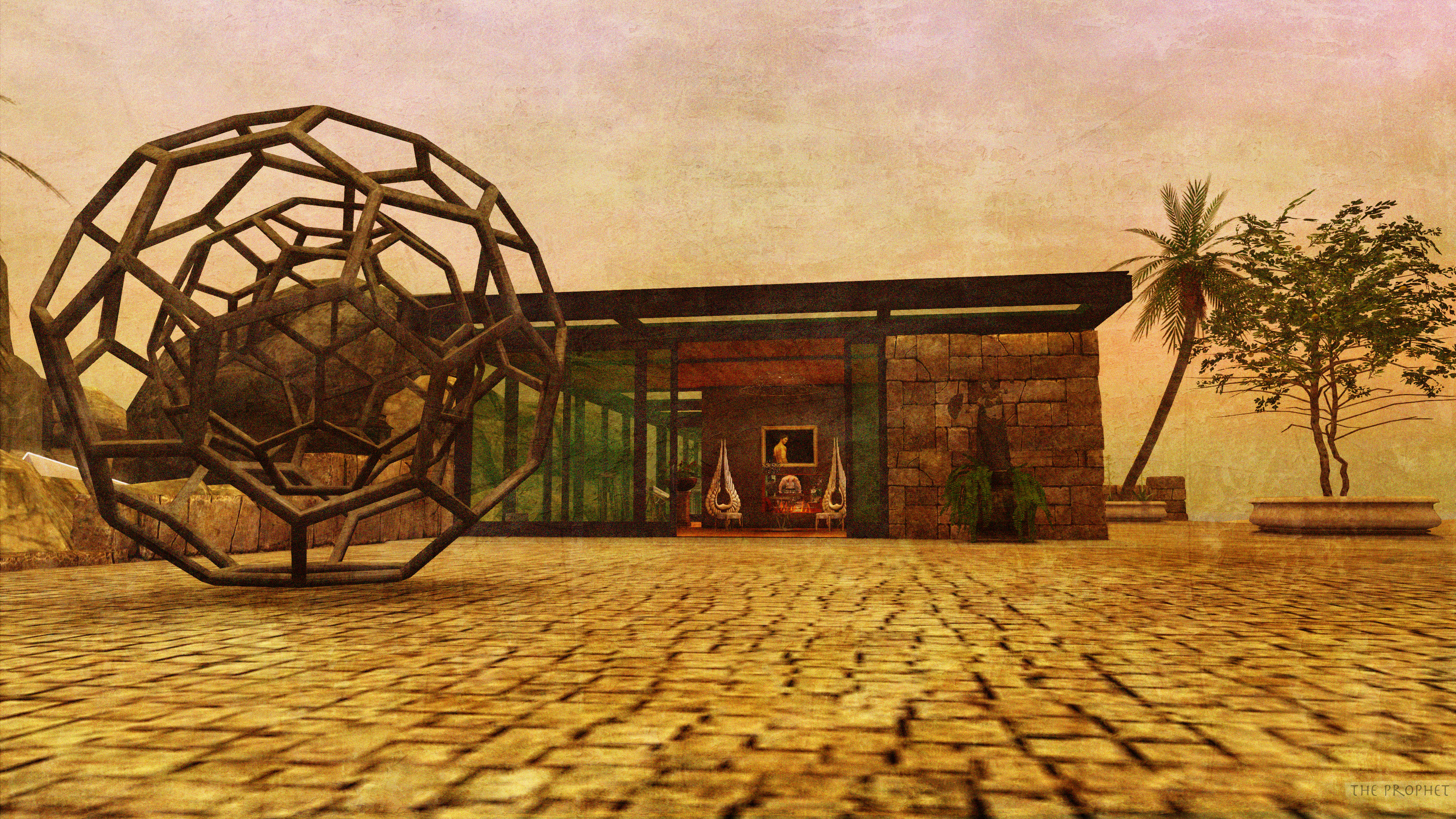 Comment by Inara Pey: There is an elegance of geometry about this image which is fabulously eye-catching. This is most obviously seen in the sculpture to the left of the image which neatly mixes pentagons and hexagons into a set of nested spheres.

However, geometry and geometric patterns are evident throughout, and framing of the image doing much to bring them to the fore without in any way belabouring things. Such as through the rectangle of the house, complete with its brick walls with their own intrinsic pattern, vertical and horizontal wooden beams, with glass squares and rectangles set between them […].

Against this there is also a natural strength to the piece, from the potted palms through the furnishing in the house, and the rocky surround to the left, nature speaks clearly to us […].

[…] But what brings the piece fully to life is the angle of the shot itself. Angled slightly up and to the left, it prevents this piece from appearing artificially framed […]. There is so much more about this piece: the considered use of the “rule of thirds” with the spheres, the way they break the skyline over the flat roof of the house, the fingers of the palms countering the sphere. The colours also imbue the piece with something more: a sense that this is a warm, friendly place in which to be.

Ticket to my Destination – Long Journey – Feb 2017, by Inara Pey

Comment by Proph: I have an inordinate fondness for the depictions of trains and subways and other methods of mass transportation, so this one was a delight for me to discover. Looking closer, though, one can identify choices of composition and color that make this image effective by any standard.

Questions immediately arise about the story being told: the subway entrance is closed off, and grass has begun to grow on the train tracks. In the background to the left, the viewer can see an open air seating with white umbrellas, presumably for the train passengers, but there is no one in sight. What could have happened? […] The questions remain unanswered, but the image is unified compositionally by the vanishing point created by the railroad tracks to the right and the park rails to the left. Also of note is the repetition of circles […].

The color choices further strengthen the image. Overall, the color palette is fairly muted, but pay attention to the patches of color given as important: in the lower right, follow the rich blue at the base of the railroad crossing sign leftward to the same blue in the subway enclosure, then upwards and slightly to the right to the pale blue of the station lamp, before the eye travels farther left to the horizontal band of light blue in the shop marquee. One can do the same with the color green […]. And again, the color red in the railroad crossing sign is echoed in the lights on the train, and the partially faded red paint on the subway roof […].

Curious about the other photos and comments? Go check the exhibition at the gallery at An Uncertain Destiny, until April 17. And don’t forget: you can leave your own comments there! (Also, in case you haven’t done it yet, check Inara’s blog if you like, it’s among the best ones out there.)