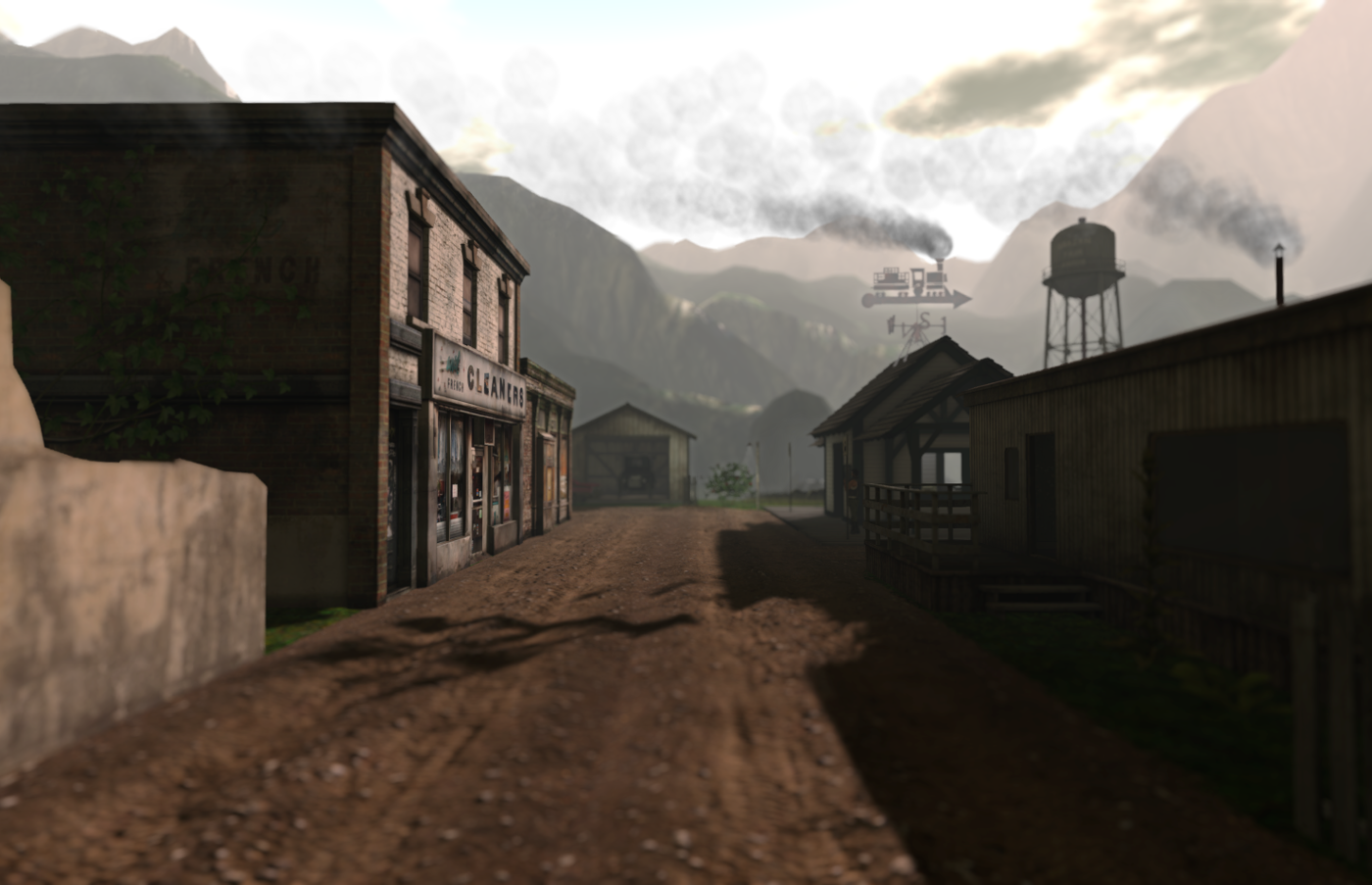 Recently, I caught myself thinking of change and permanence in Second Life, as Randy and I decided to revamp our parcel and redesign part of it. The parcel we live in can be roughly divided into two parts – a rural residence and the small town of Brazen Fair Ends – with a transition section between them. The renovation reached both zones, but it was the town that saw the biggest modification, a transformation of its concept. It became more immersive and more village-like at once, and, though it basically occupies the same area as before, it feels denser now. 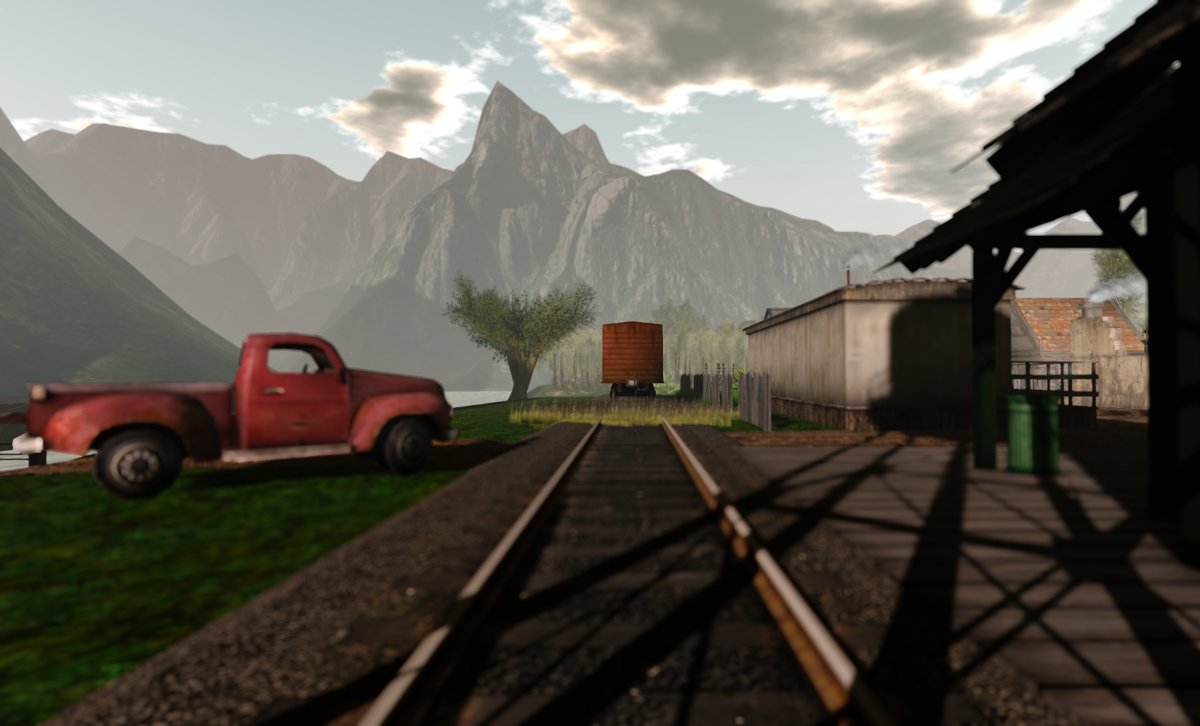 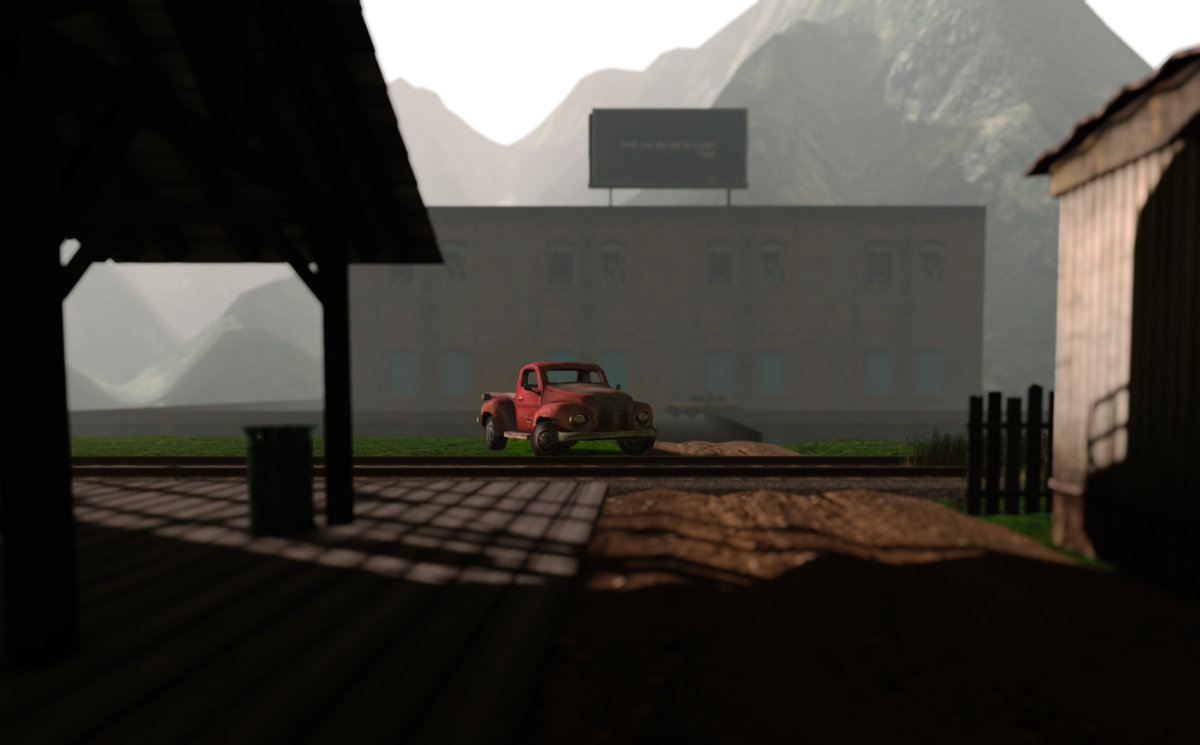 The warehouse at the town 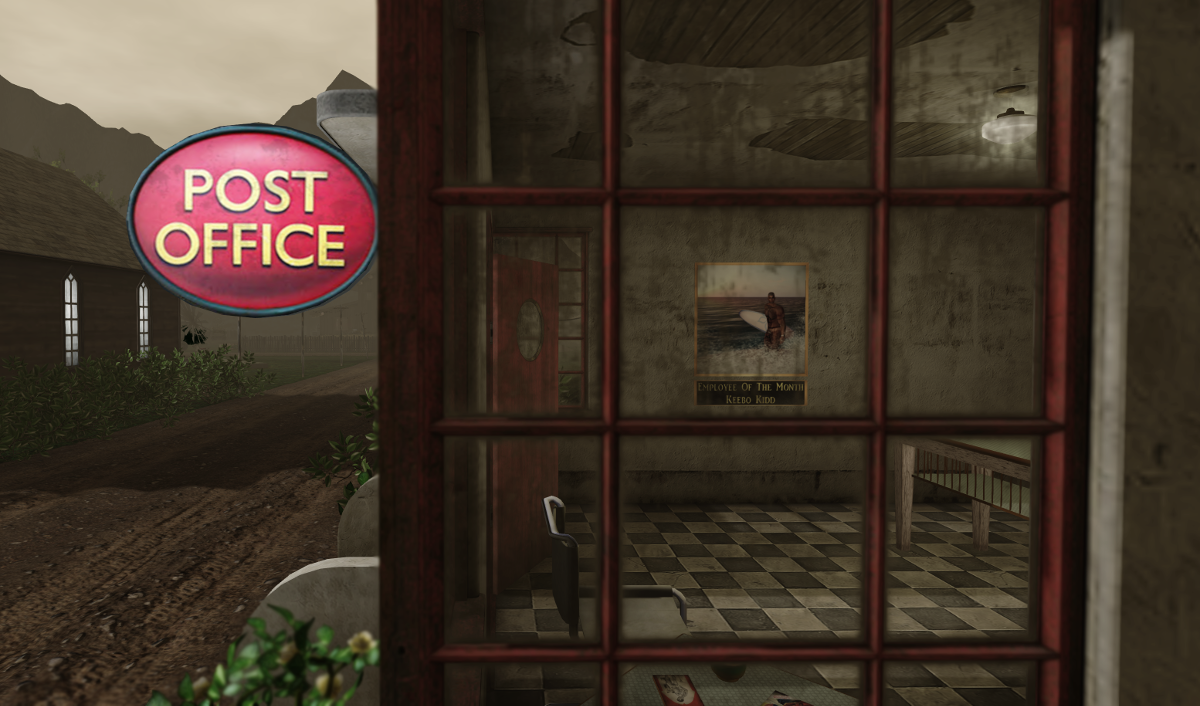 Randy and I have been using the same concept in our parcel for a while now. The idea is that our house is not just an isolated structure in the middle of nowhere or purely surrounded by nature, but a building that is somehow connected to civilization – even if only to a reduced portion of it or to its boundaries. We share a homestead with a couple of friends, so it was clear to us that we could not think of a typical urban area, both because it wouldn’t fit our neighbors’ ideas to their parcel and because we would probably face difficulties to decorate, given the prim capacity we had. So, we opted for a rural area with a small town.

As time went by, the concept of the town evolved in our minds to what we have recently decided to build there. In short, what one will find in that area is a village that may be partially abandoned, or maybe not, but which is certainly in decline. We kept a couple of buildings that were in the former version of the town – particularly, the one that has the TV and the antenna that was made by Randy, and the Post Office, in which we celebrate memory of our late friend Keebo. Anyway, as a whole, the place draws from both the poetry and the poetics of decay. 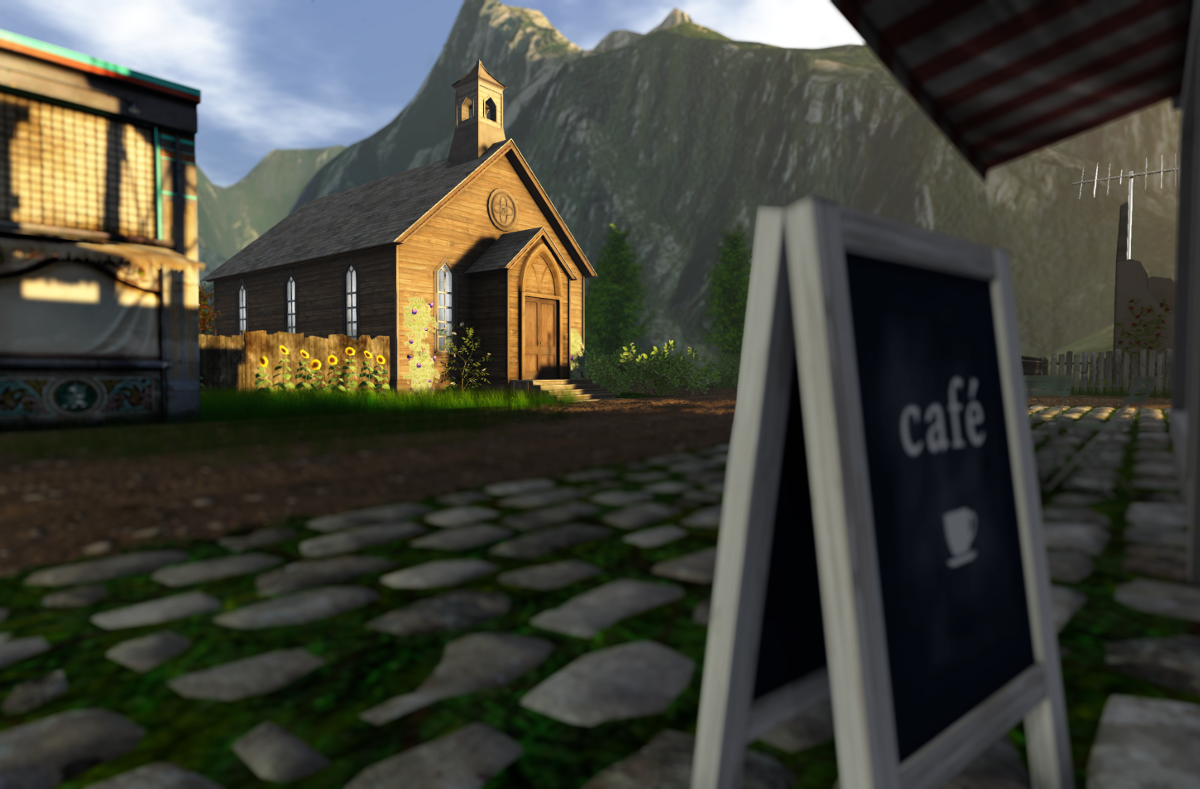 The church seen from the café

On a first level, in the realm of poetry, Brazen Fair Ends clearly draws from lyricism. In other words, it is intended to evoke emotions in its visitors, both by being immersive and by bringing some surprises, such as a piano on the roof of a building, which certainly adds some romanticism to the remains of a place that has seen better days. The decline which is portrayed there clearly tries to create a nostalgic atmosphere, appealing to the feelings of people who walk around the town. 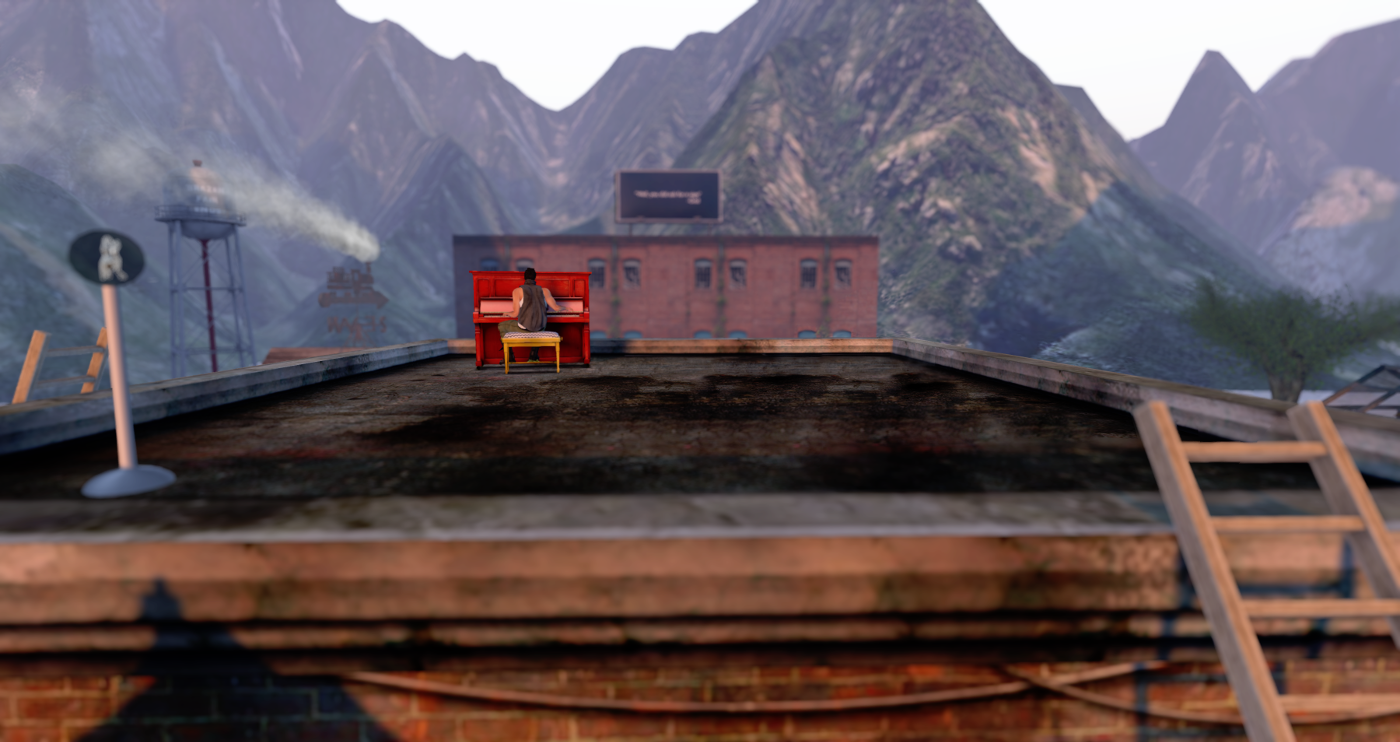 Ricco playing piano on the roof 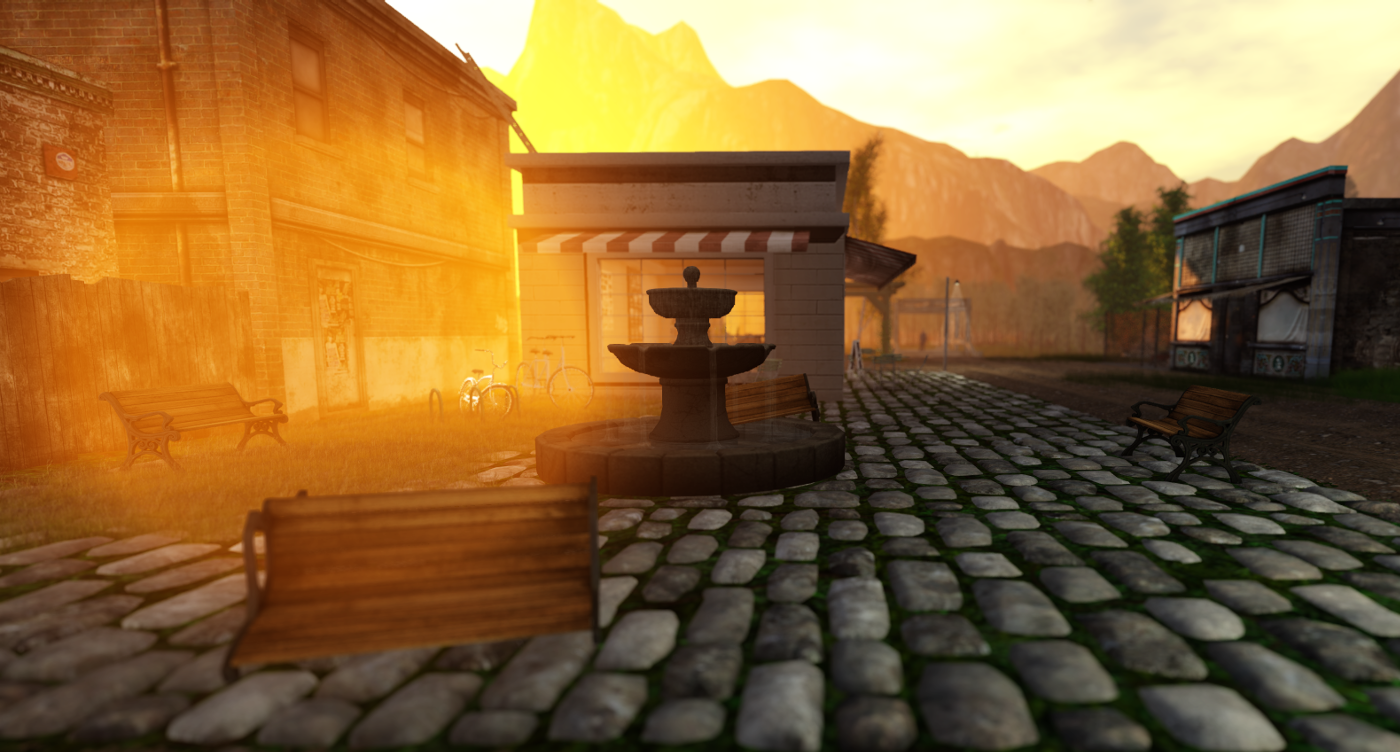 On a second level, what I mean by “the poetics of decay” is a certain drama which is enacted in the town. A place which is converting into ruins tells us a story: worn-out buildings give us testimonies of a process, rusty cars show us that time is passing, broken benches on a public square indicate that things suffer the consequences of different forces. 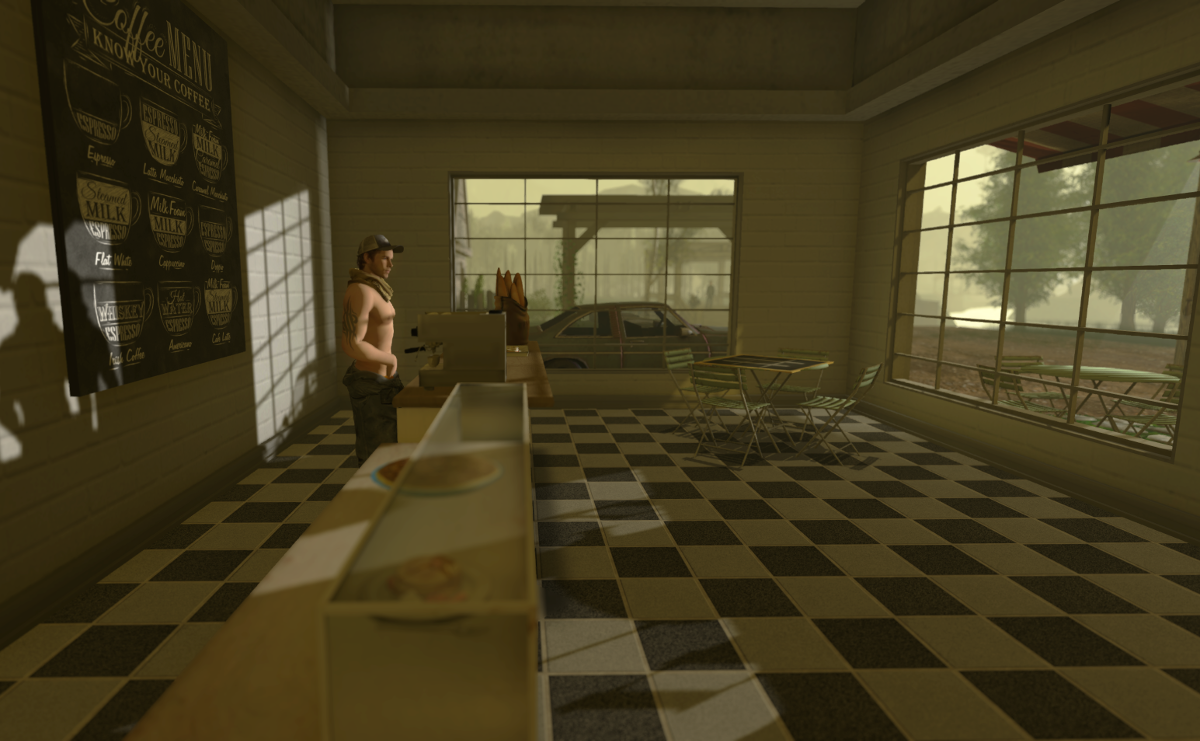 Inside the café, the attendant waits

In that sense, the poetics of decay introduce a representation of time in SL, an environment where nothing has to oxidize or putrefy and where avatars don’t get older. Still, it’s a static representation of time, not a dynamic simulation of it: if we don’t actively interfere with the parcel’s decoration anymore, it’ll remain as it is now, it won’t keep decaying. 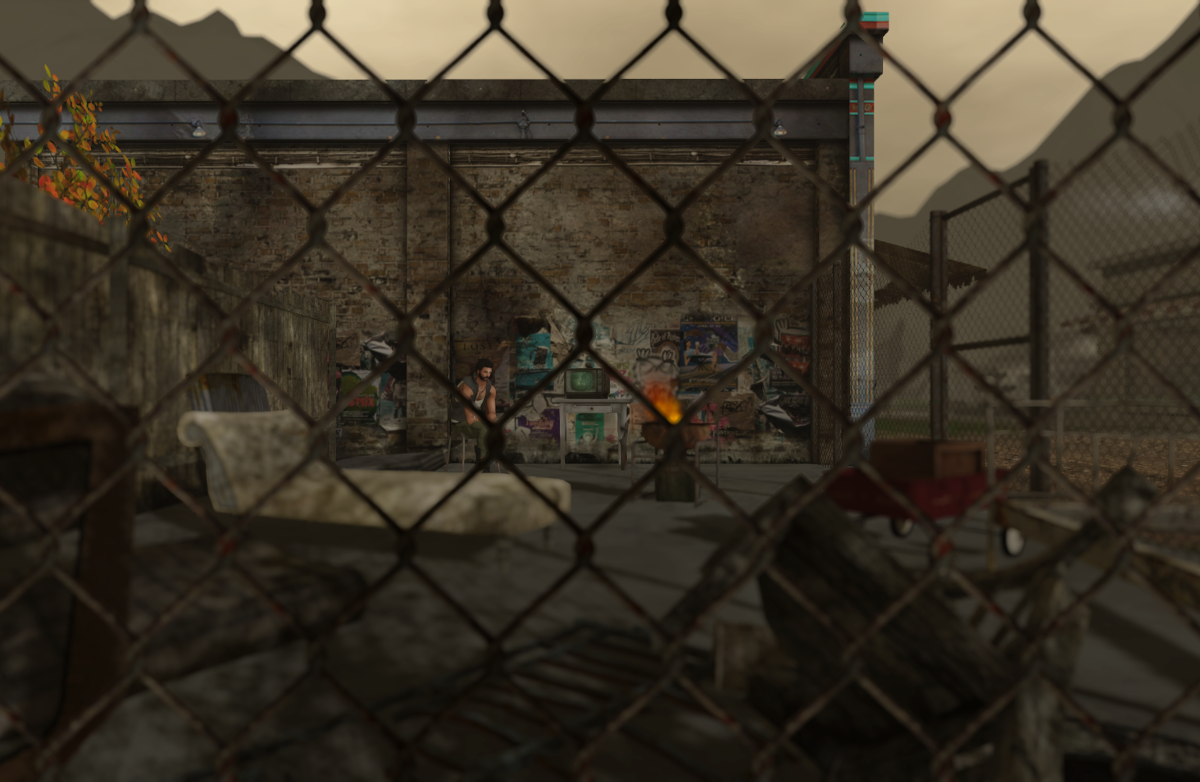 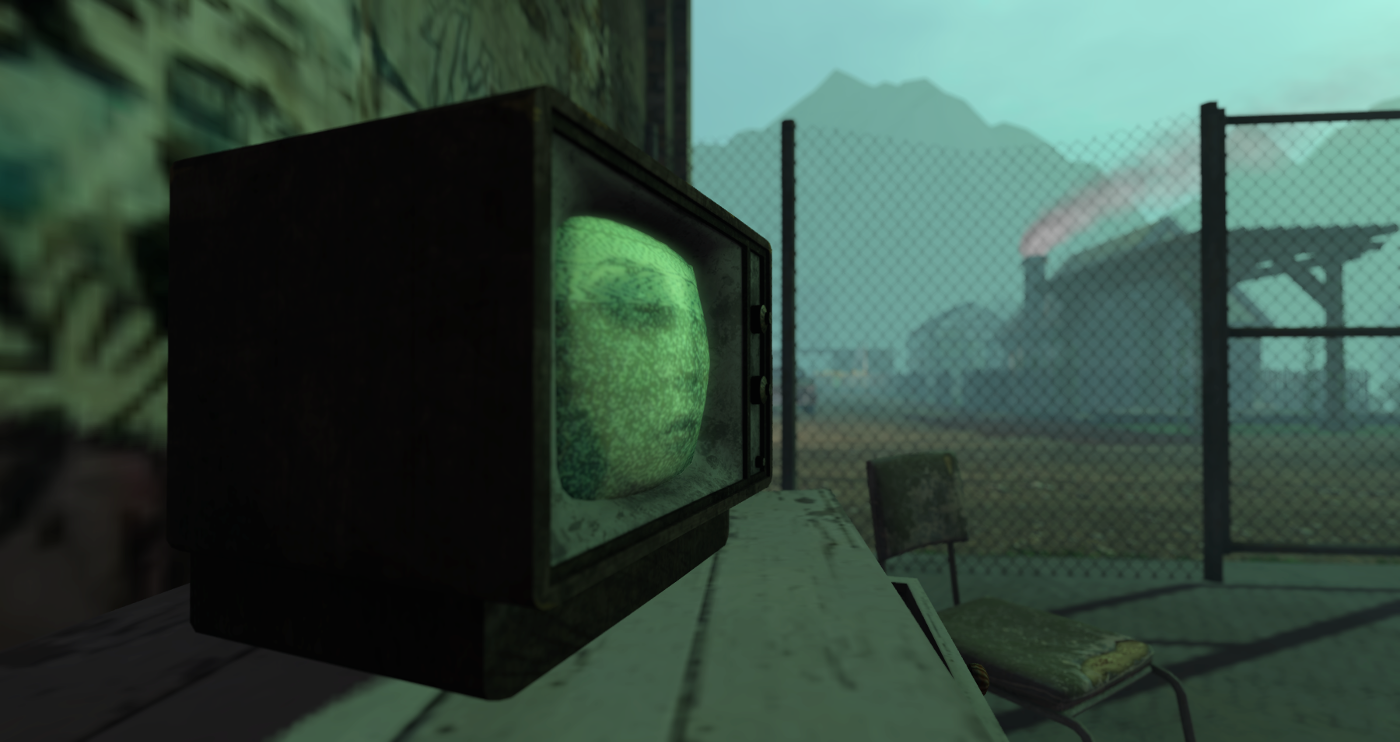 A TV at the junkyard

In a certain way, though, it’s clear that things in SL have been changing. Take mesh items as an example. Yes, mesh items have been there for a while, but they have improved a lot since they were introduced. Today, land impact caused by mesh can be really low, which allows people to have more items (and more detailed ones) in parcels with lower prim capacity. Enhancements can be noticed, too, in mesh body parts (heads, hands, feet) and full mesh avatars, which have become more and more popular. 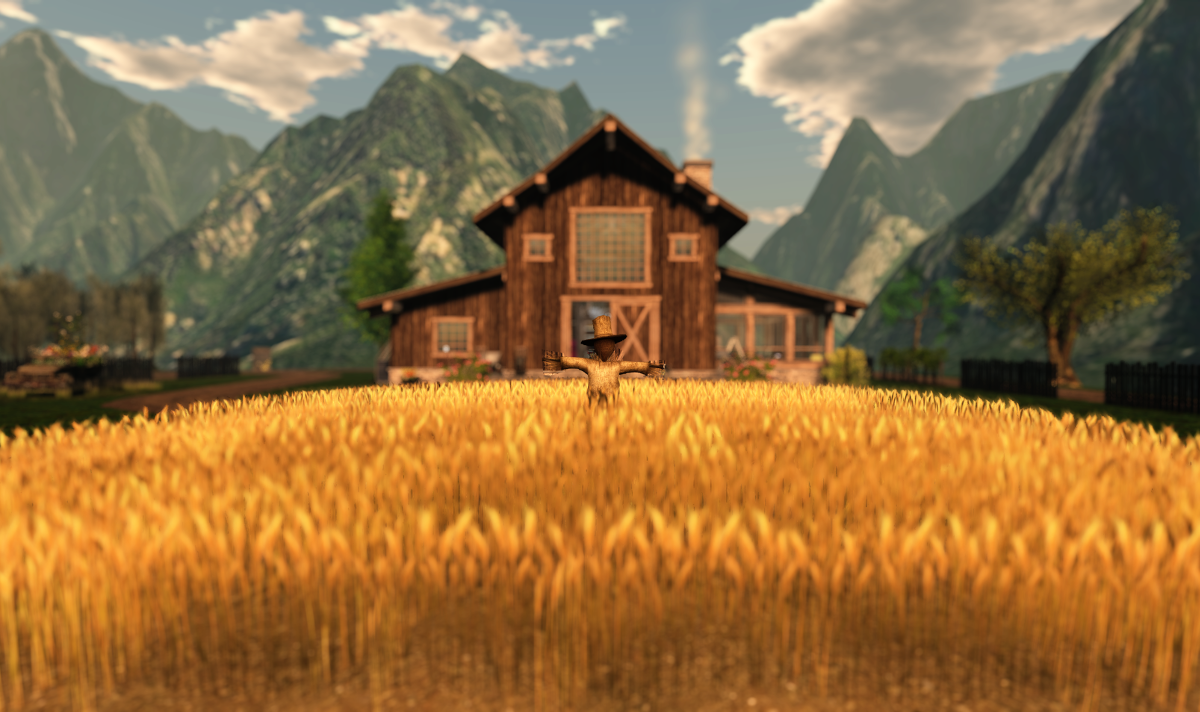 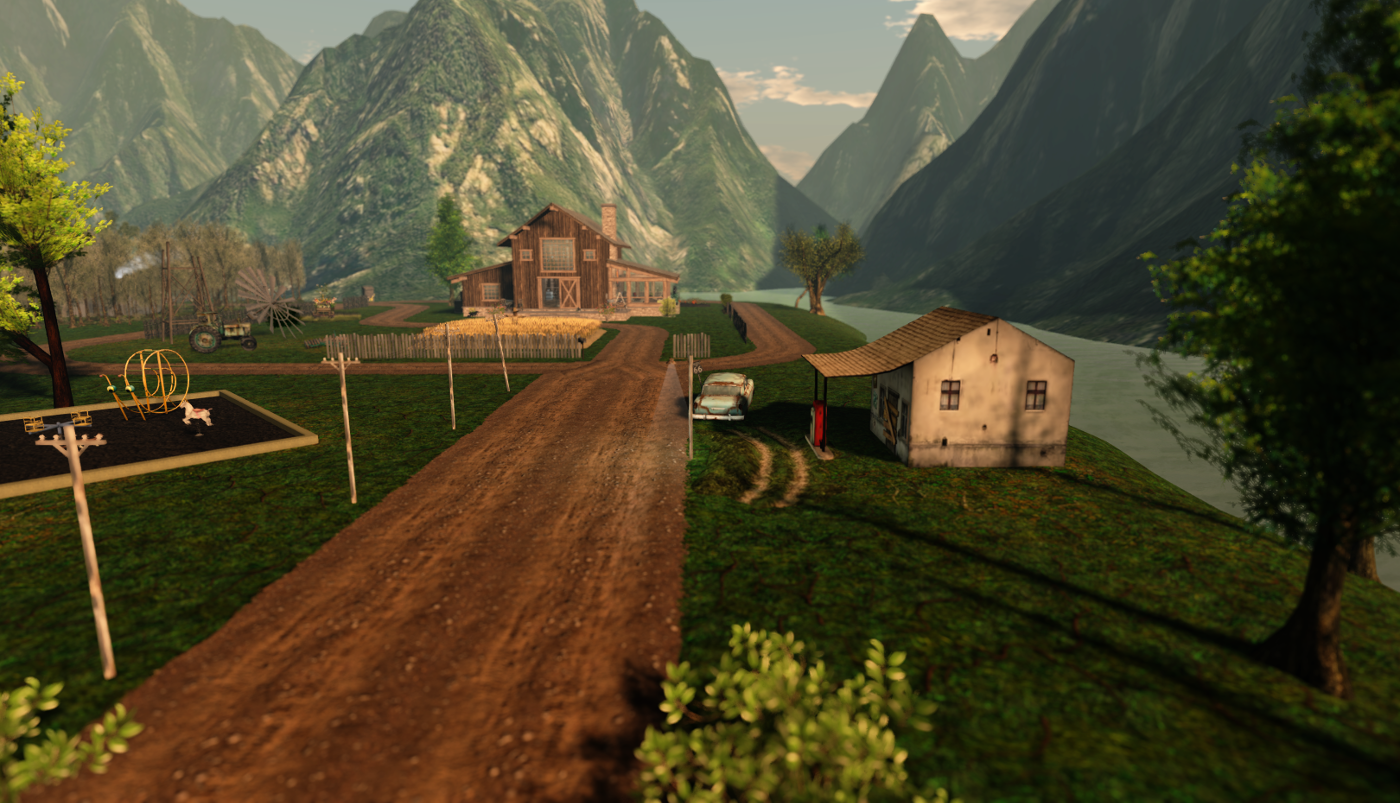 Road to the house: playground and gas station 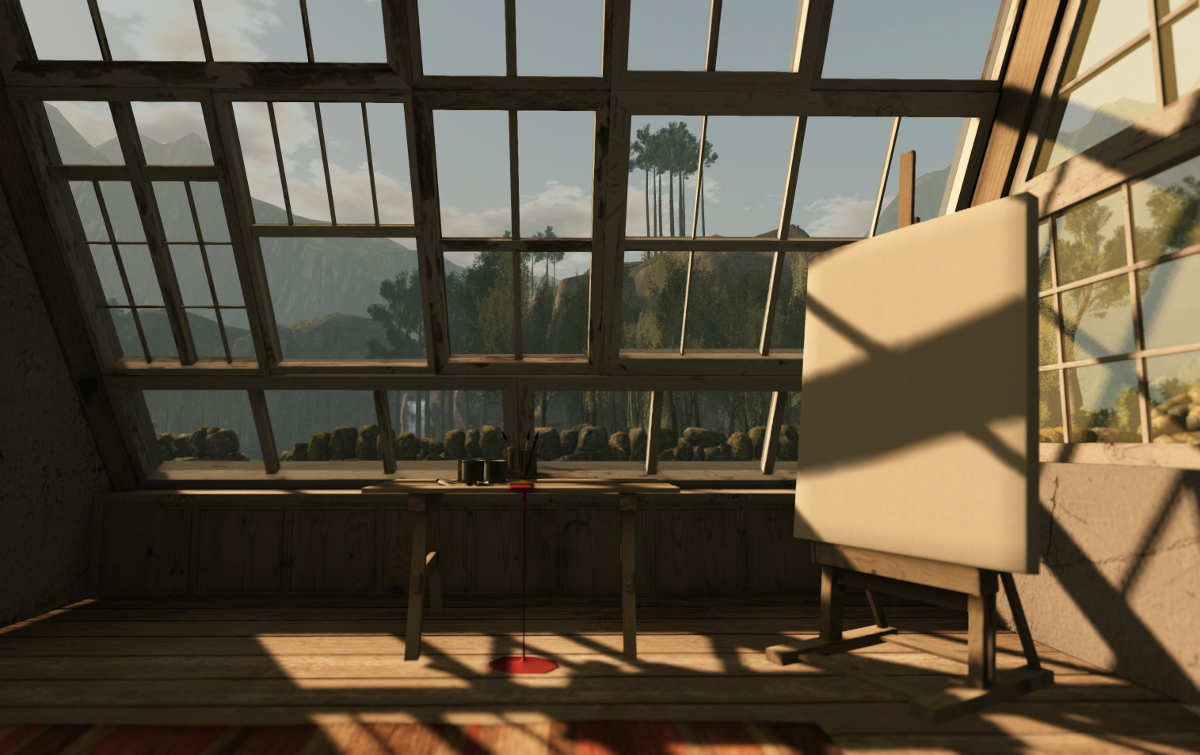 View from the art studio near the house

Such a development contributes to people being willing to redesign their parcels or sims. Nonetheless, those changes cannot be explained exclusively by technological enhancements introduced in SL. Generally, those advances combine with other factors to produce transformations as the one Randy and I submitted Brazen Fair Ends to. In our case, the idea that we could save prims combined with our desire to create a more immersive environment. And, let’s face it, many of us choose to change things in Second Life because we can – because it’s easier to revamp a sim there than to reform a house or build a new one in the atomic world, because in SL we can go tanned during the day and ginger in the evening, because we can painlessly experiment it all, knowing that, if we don’t like the results, stepping back doesn’t generally require a major effort. 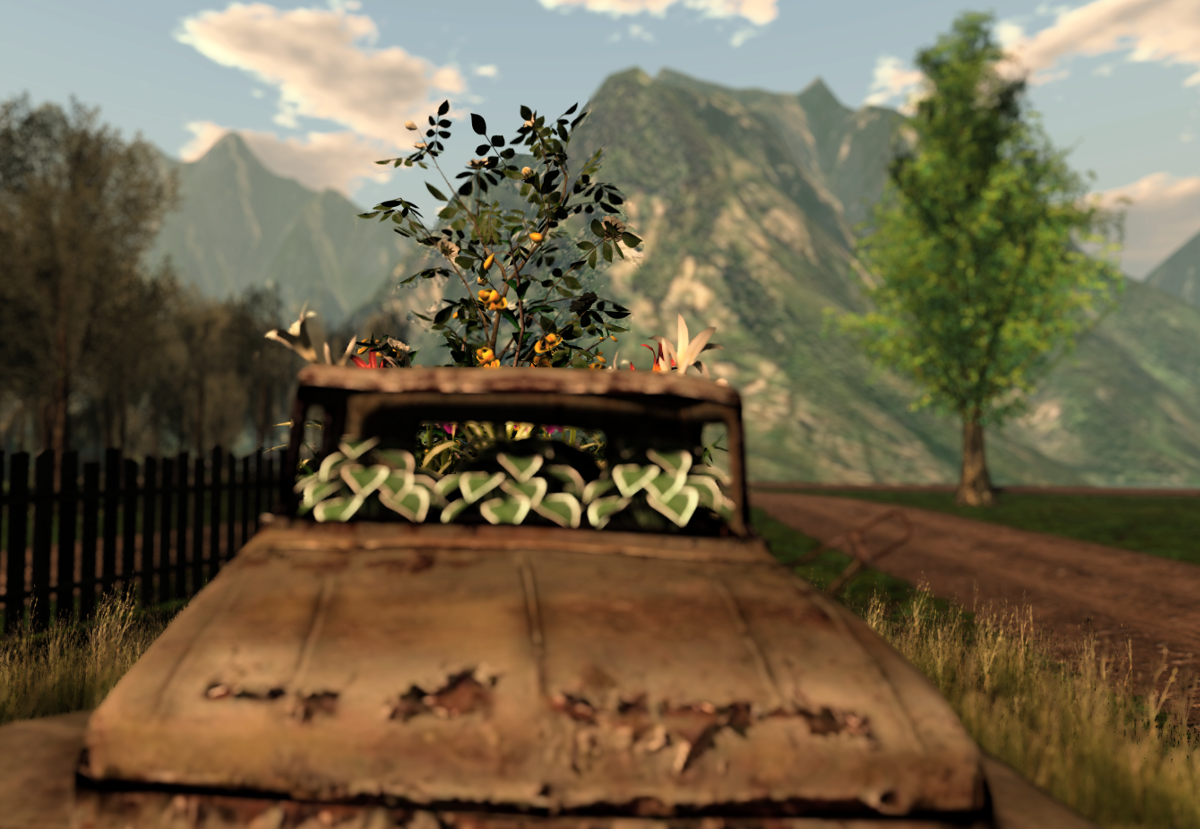 Randy’s garden on an old truck 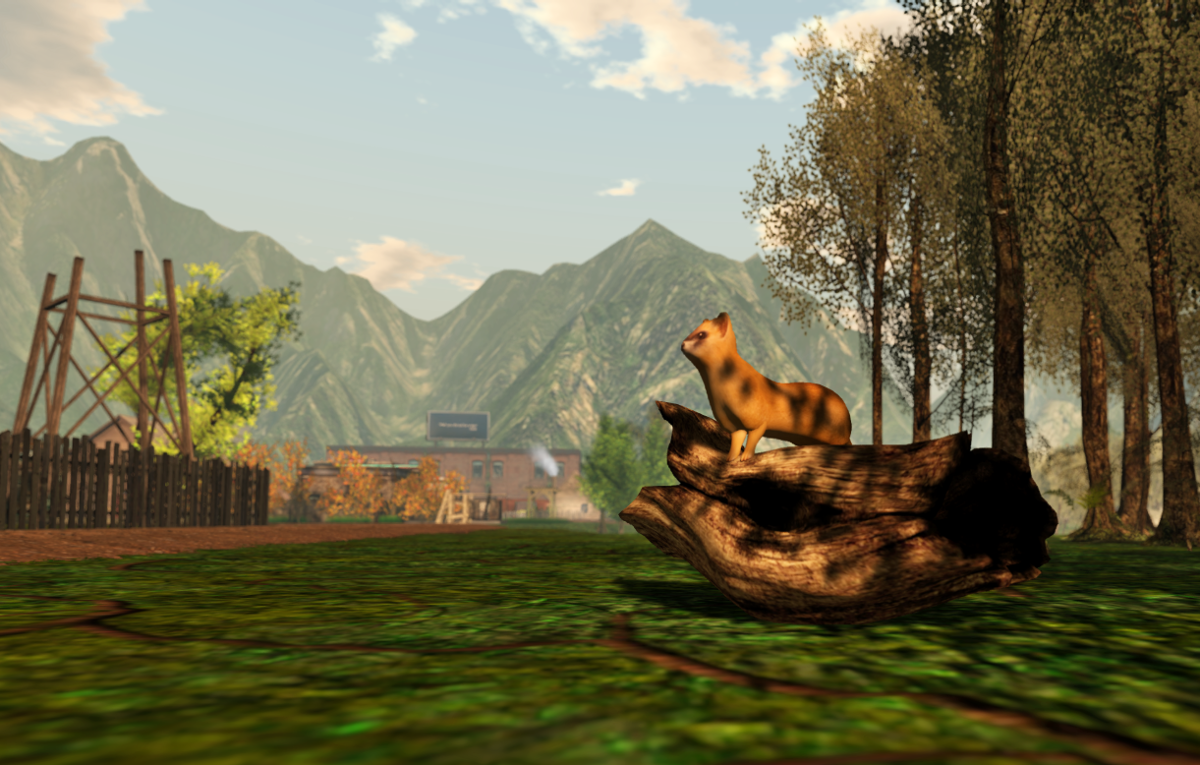 A resident at Brazen Fair Ends 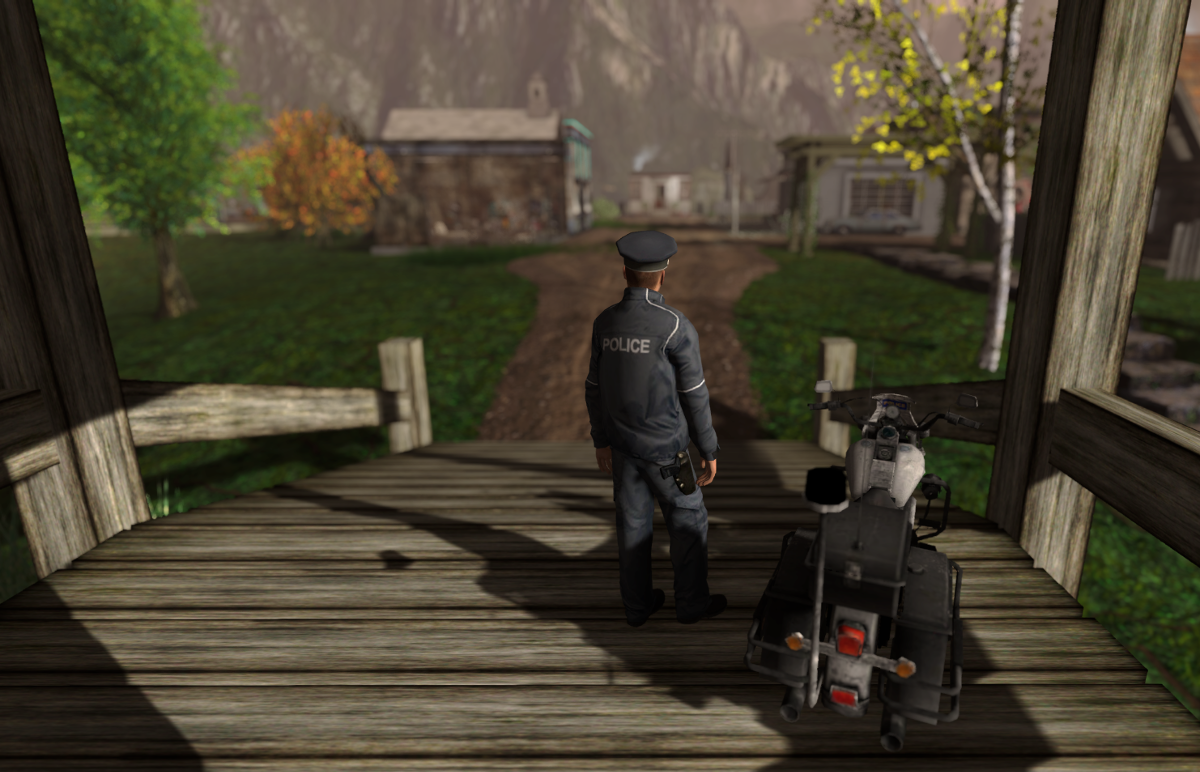 The policeman observes the town

It is true that some places have been preserved in SL, and we tend to be thankful for that. Still, change is the rule. How many times have you redecorated your house, your parcel? How many sims are gone that you liked to visit in the past? How many have changed and are completely different now from what they used to be? How many friends of yours have replaced their hair cuts and colors, their skins, their whole bodies? It is curious, though, that all those changes are made in an environment internally protected, as I remarked above, from the flow of time (for, in its internal logic, things and people don’t age in SL, they don’t keep decaying, even if they are portrayed as declining items or beings). Maybe that’s the irresistible triumph of time – or maybe nothing so epic, just our vainness, our instability and the general ephemerality of our days.

9 thoughts on “The poetics of decay: revamping a parcel in Second Life”