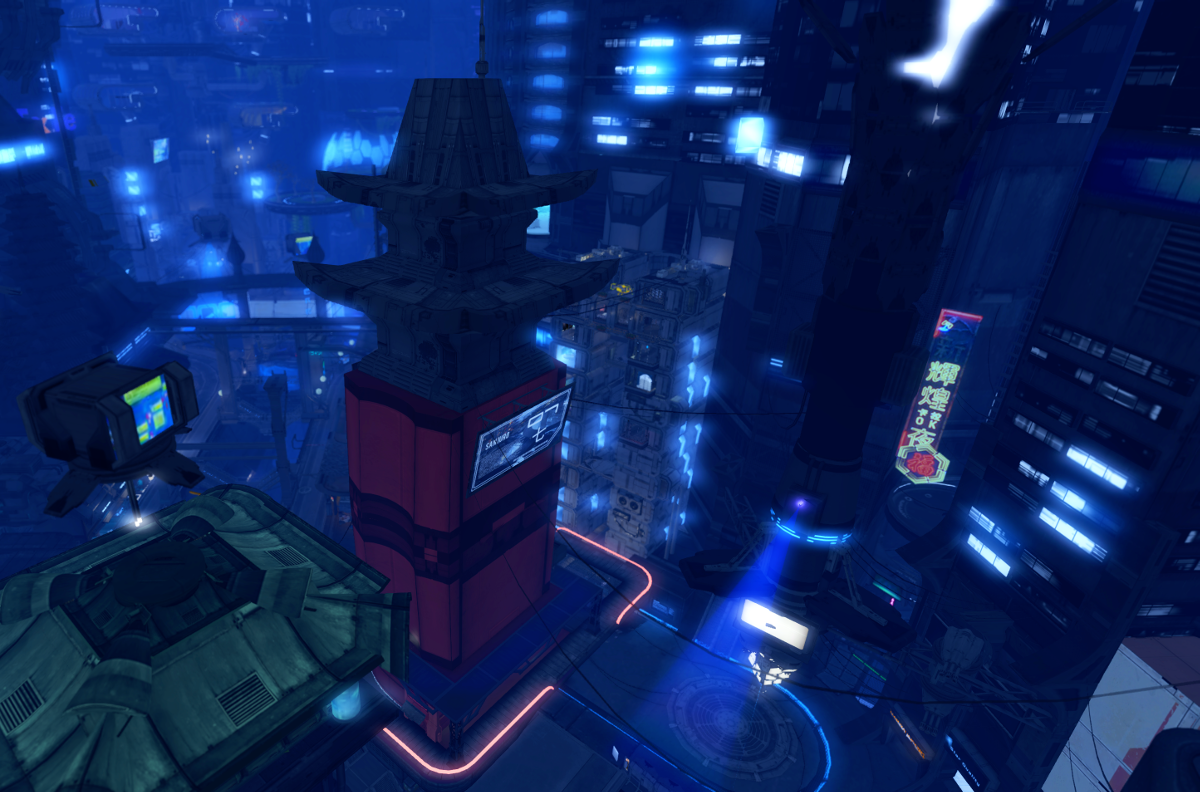 In silico is an expression that refers to computer-based simulations of biological processes, in contrast with processes in situ (in the places where they normally occur), in vivo (in live organisms) and in vitro (in closed and controlled laboratory environments, such as test tubes). In Second Life, it was the inspiration for the name one of the most well-known groups of regions on the whole grid, Insilico, that almost vanished this week and, though it came back, is still at risk. 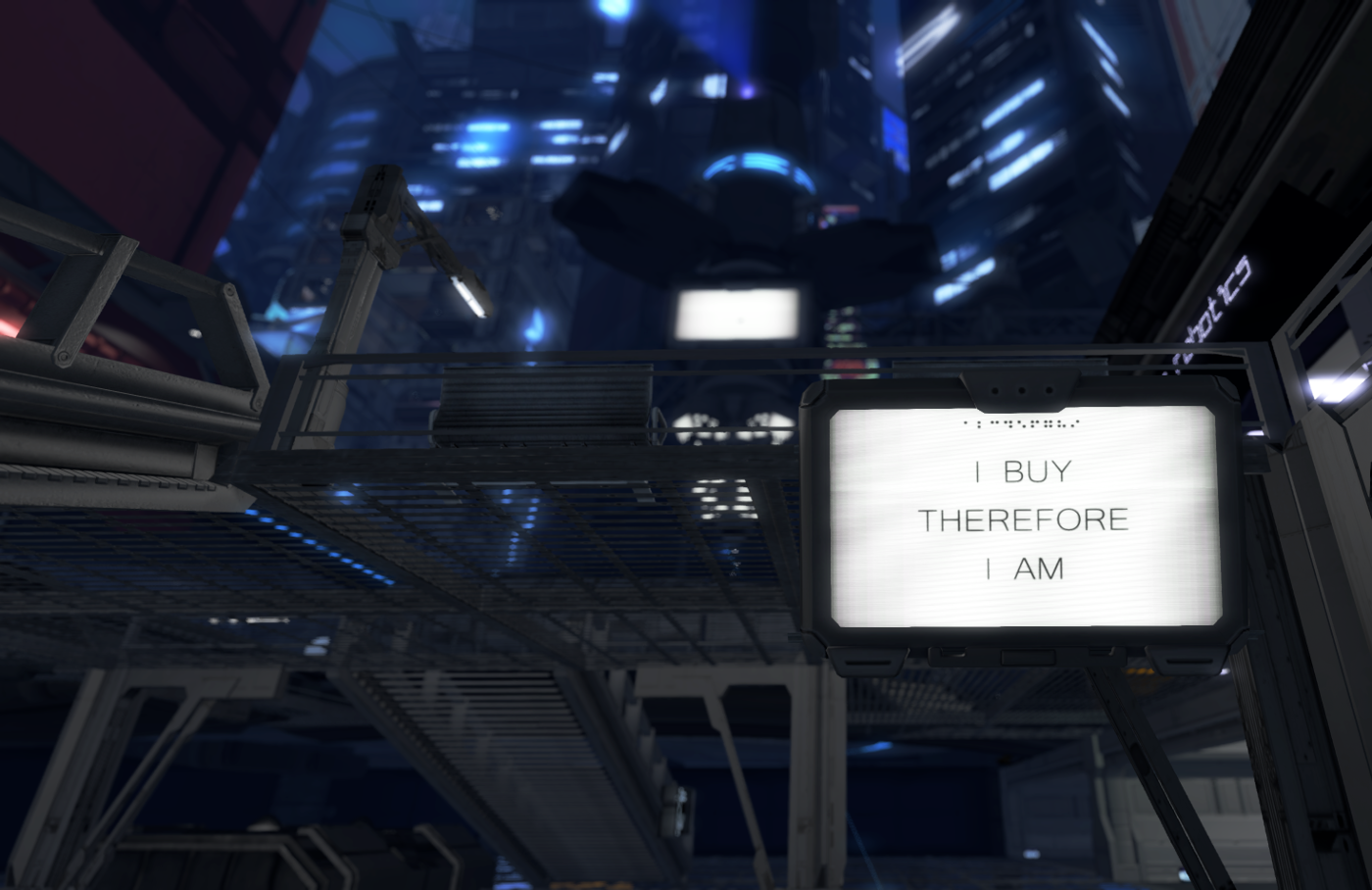 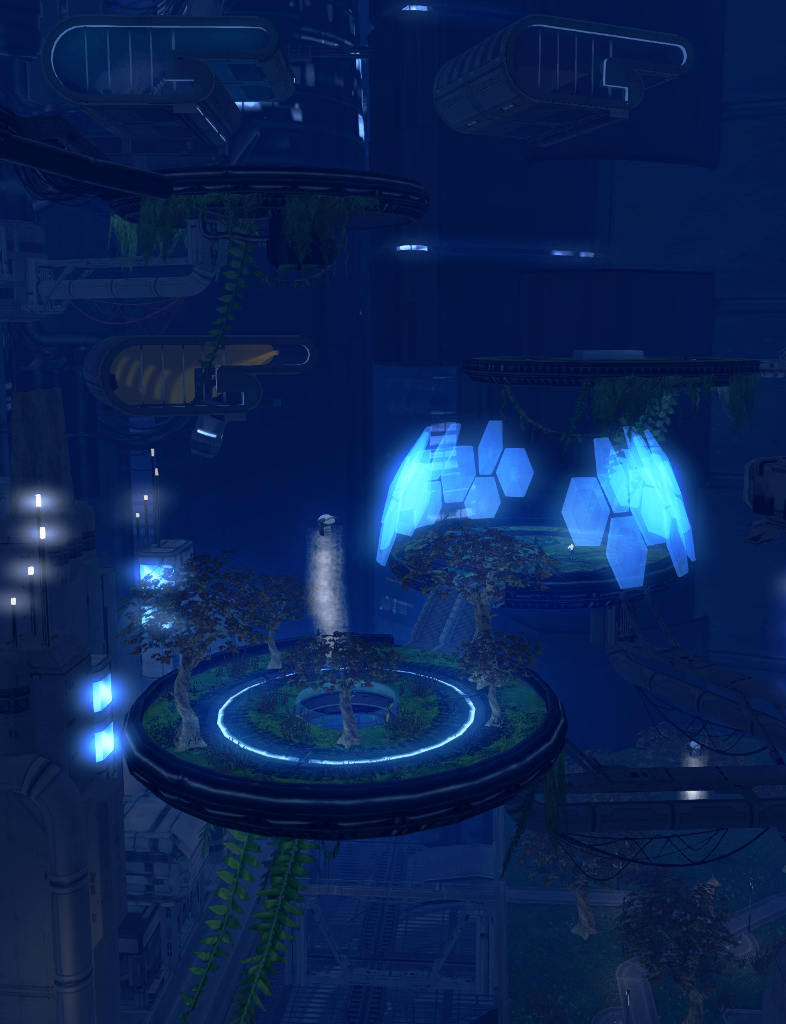 When Skills Hak announced that she was permanently banned from SL, people feared that all the four Insilico sims, which belonged to her, would disappear. In fact, access to the sims was blocked for a few days, although they kept appearing on the grid map. Finally, Abe, a GM at Insilico, reached an agreement with Linden Lab, apparently suggested and encouraged by Skills and with her participation, to get the regions open again to the public. As Abe stated on a blog post, with the ownership transfer of the sims, the team which is responsible for the place now doesn’t have the financial cushion that existed before and, so, they have to see if it’s still viable to keep it going. 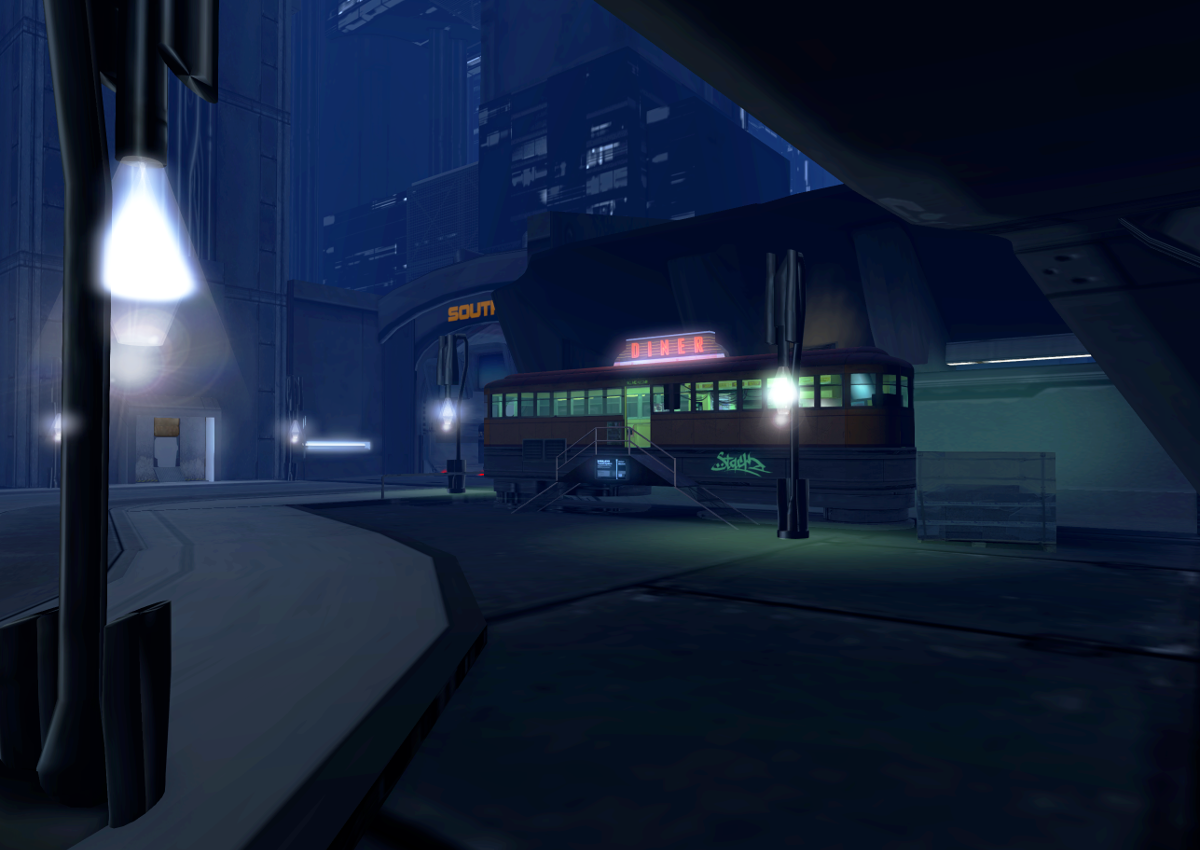 A diner in Insilico

Despite all the news about Insilico these days and remembering it was shortly taken offline by Linden Lab on Feb. 25, my intention here is not to discuss the ban of Skills, for which we will probably never surely know the reason. Instead, I took the opportunity to visit its regions and their many levels again and get marvelled once more by the disturbing beauty of that place, built in a pre-mesh era but still visually amazing. 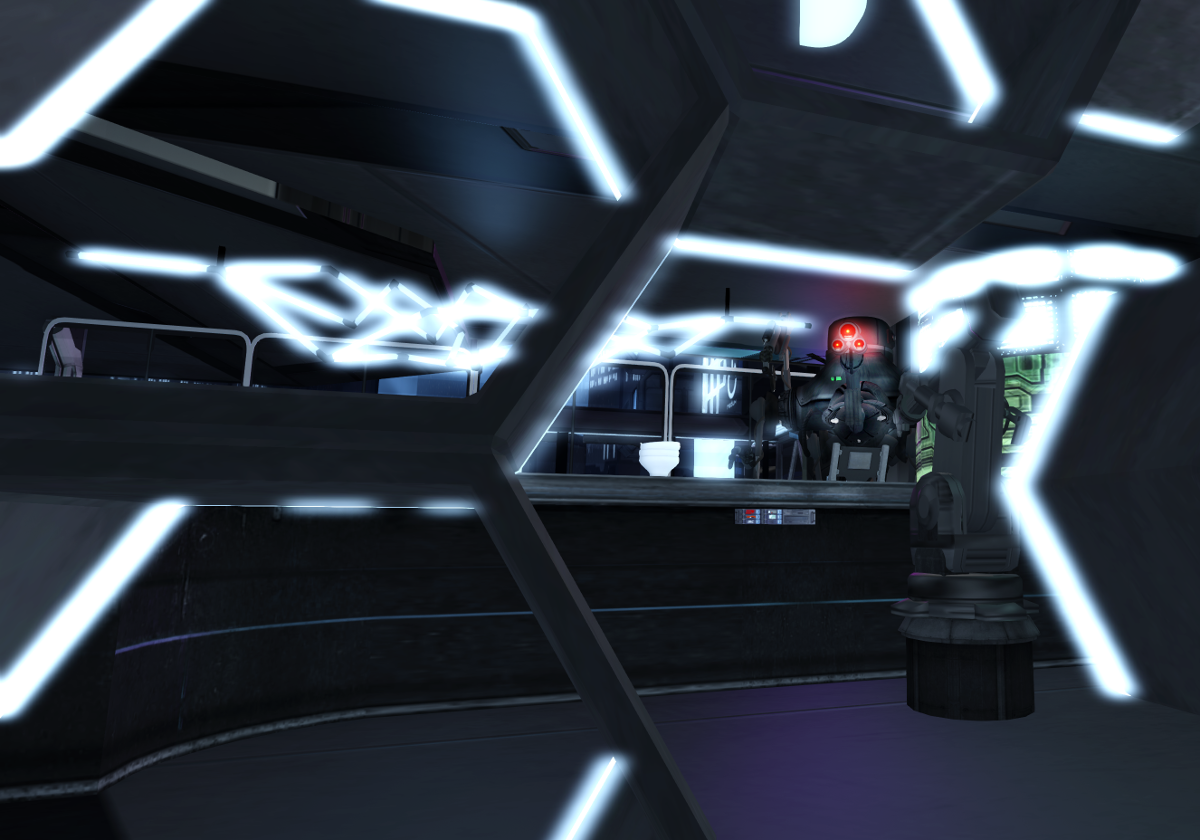 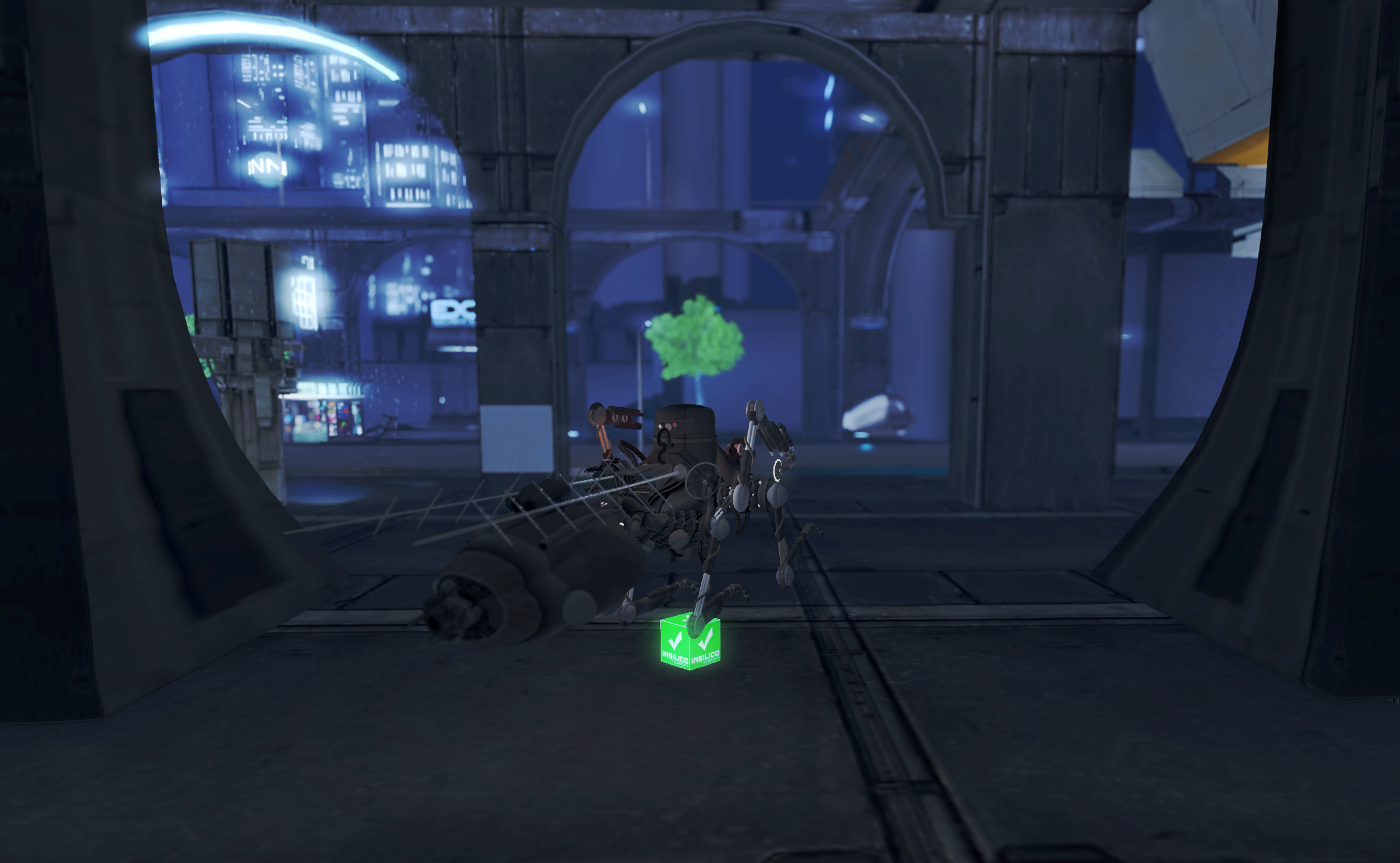 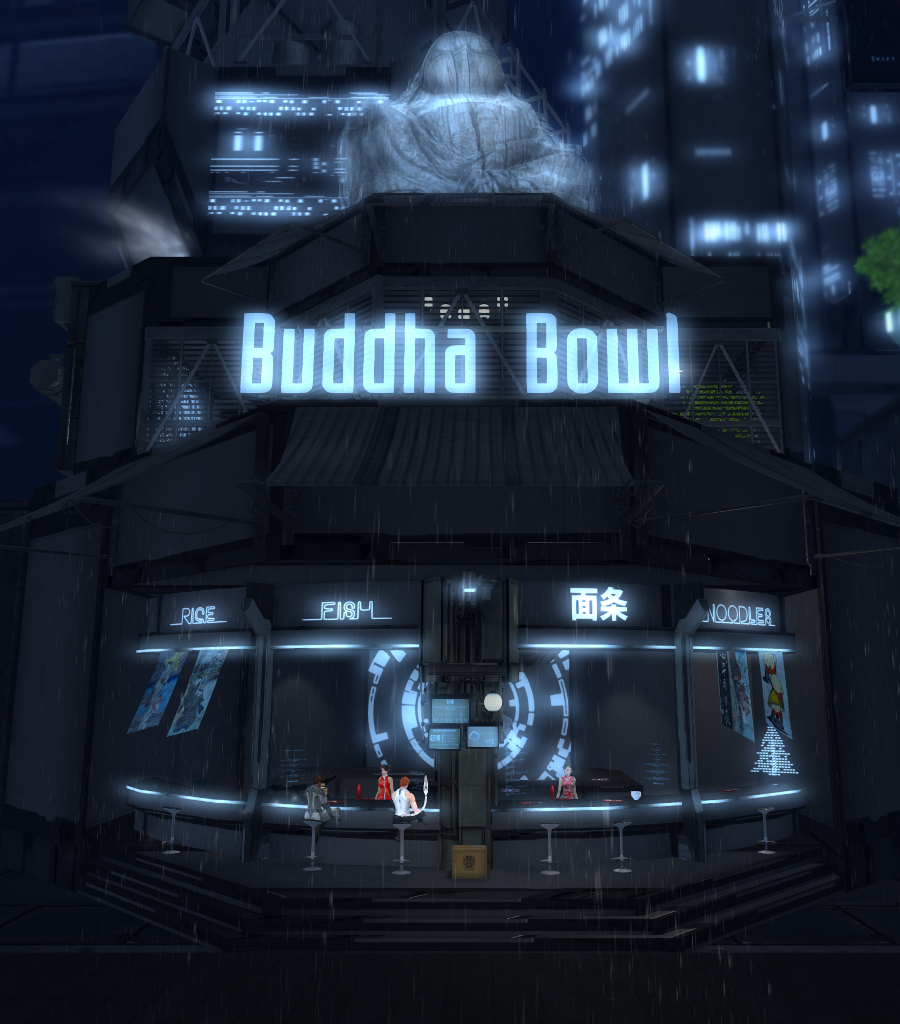 Insilico is a futuristic-themed place and, as such, a role-play environment. Still, you don’t really have to engage in role-playing to visit it (I’ve already confessed on this blog that I don’t know how to role-play and that I feel somewhat uncomfortable to try it out, though I realize it could be a great fun; so, actually, all the times I’ve been to Insilico, I went there as an observer). It’s interesting, anyway, to pay attention to its background story, which can help both players and simple visitors to understand where they are. 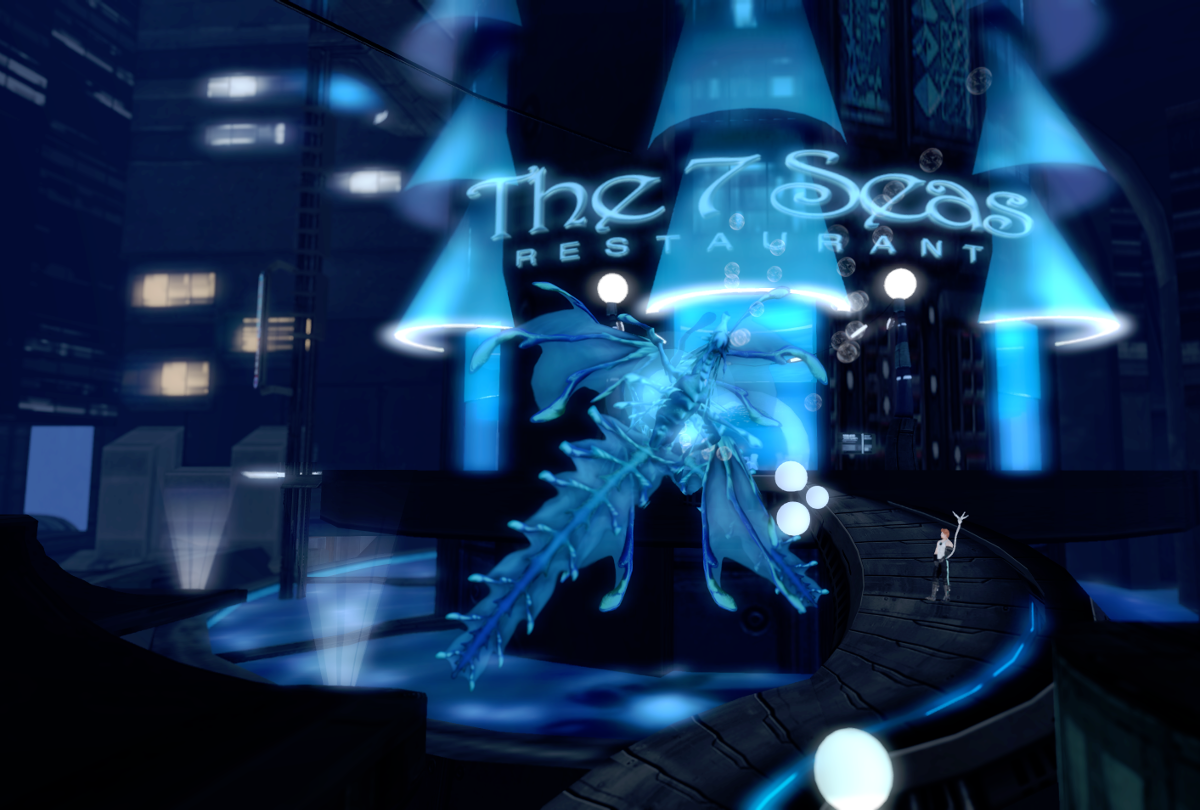 Restaurant: going out for dinner 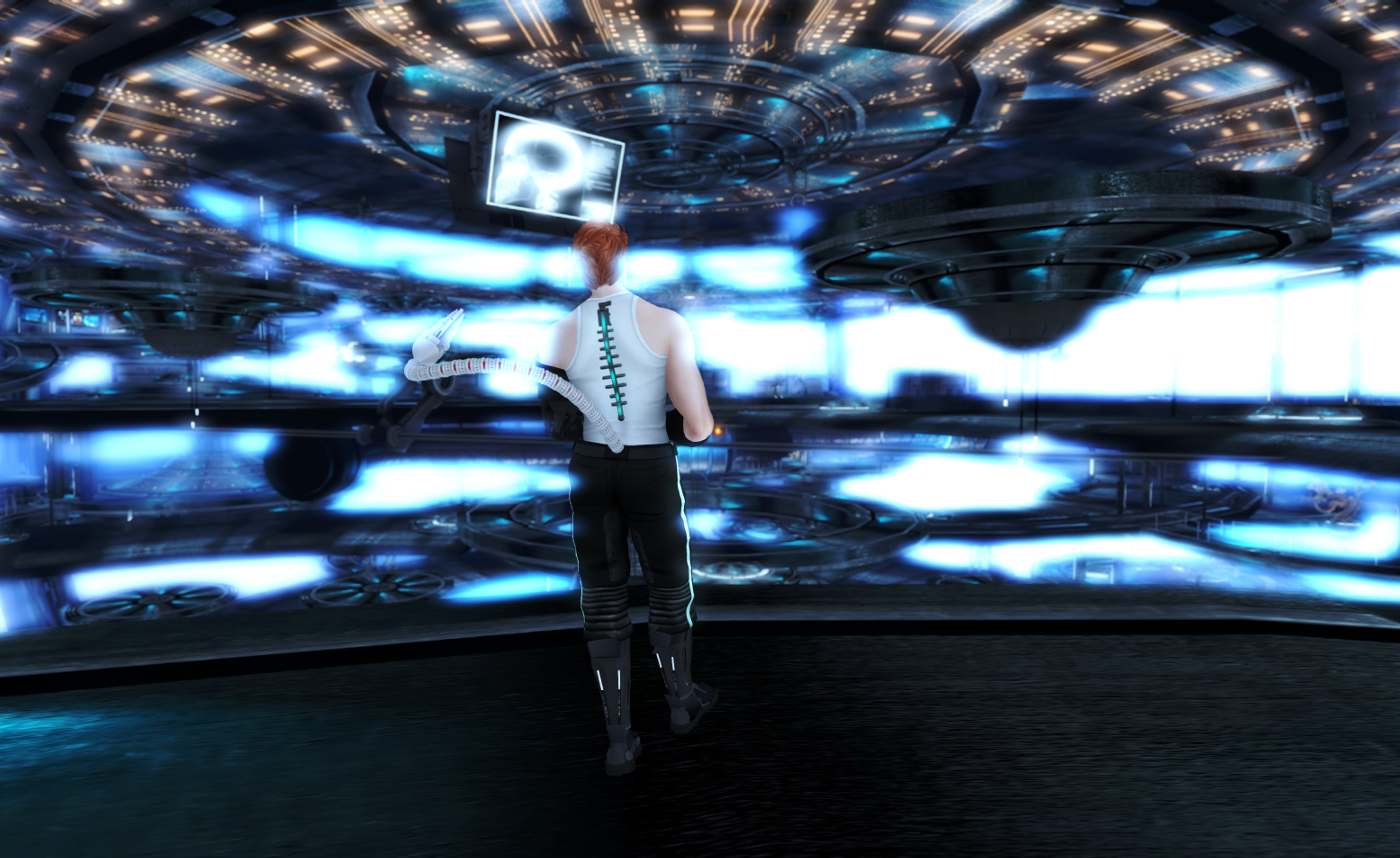 Summarizing, when you arrive at Insilico, you are on the year 2486. The city floats at about 3,600 meters above the ground and was built as an alternative place to live on an Earth that had its surface made practically uninhabitable due to wars and environmental deterioration. Since the ozone layer has been destroyed, Insilico was covered by panels that both protect people from direct exposure to solar radiation and convert sunlight into energy – but that also make the city always dark. The planet is dominated by mega corporations that are present elsewhere too – significantly, in Mars, where they dedicate themselves to mining and where a human colony was established. 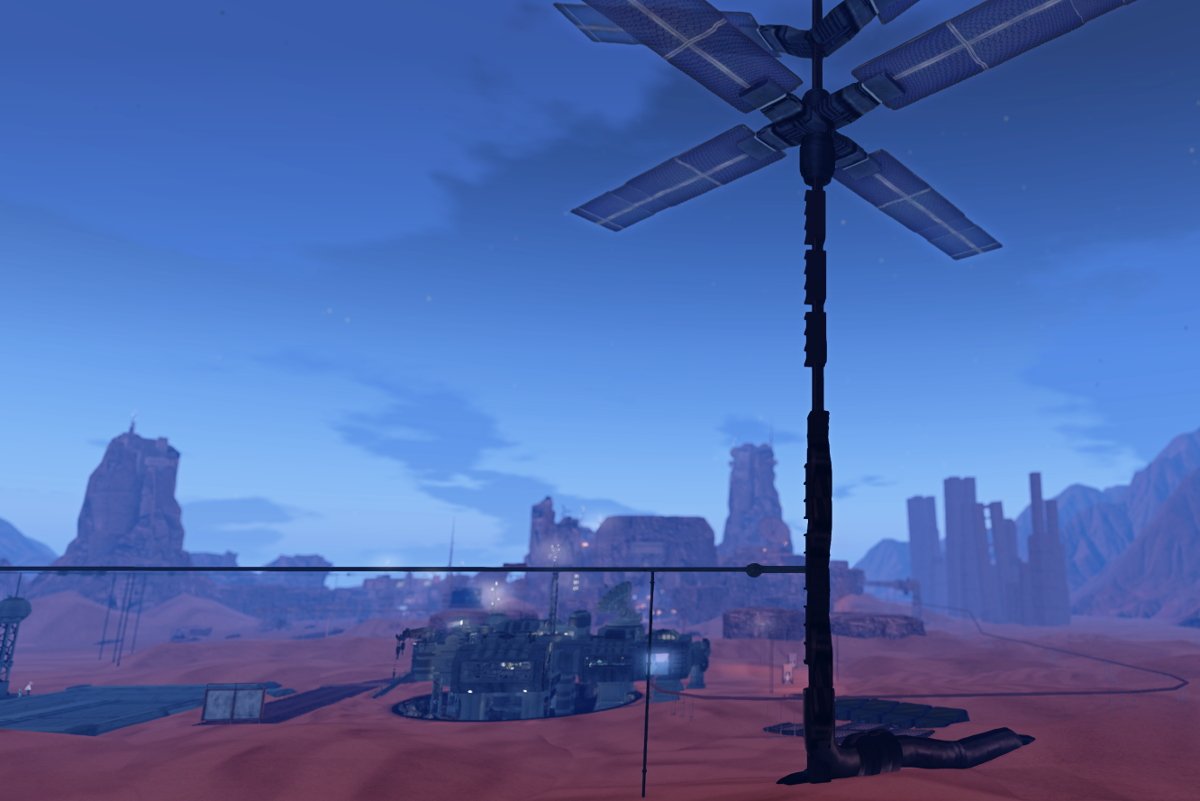 The station on Mars 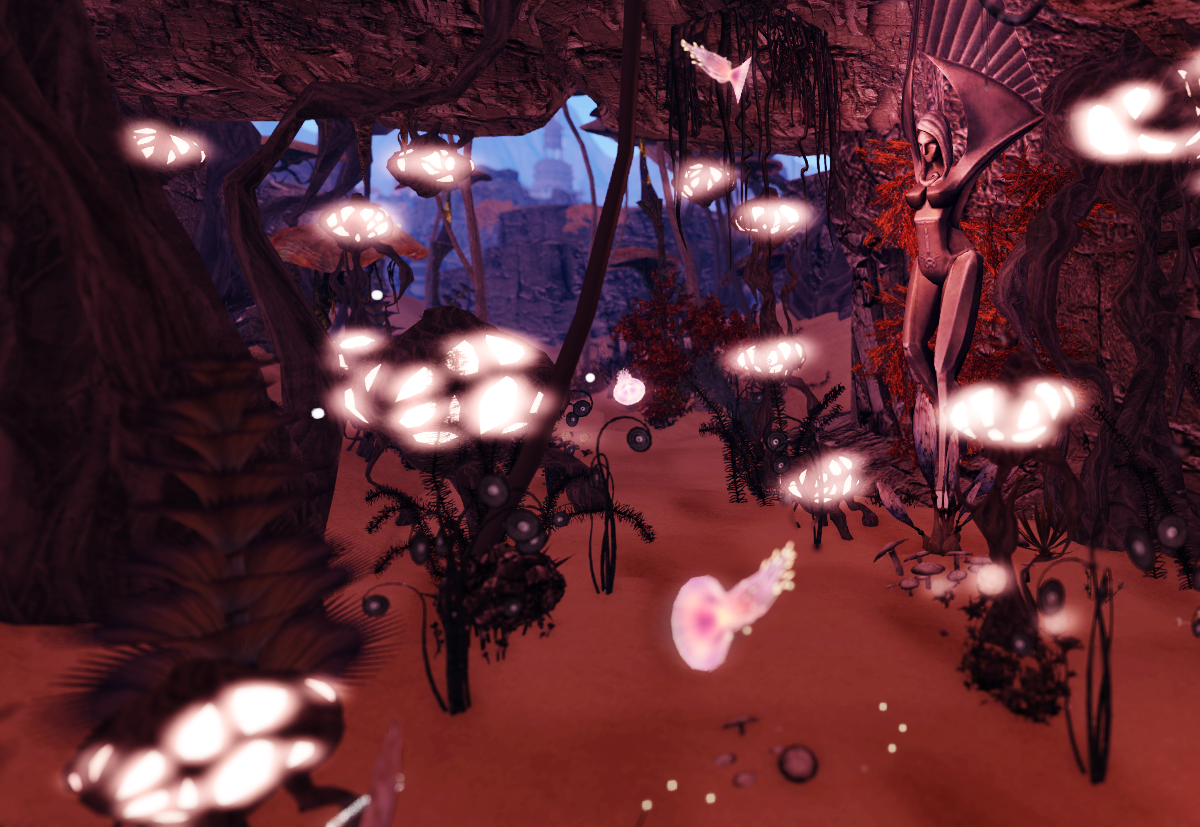 As one may see, it’s the classic background for a post-apocalyptic, dystopic place, with its particularities, of course (and brilliantly executed, I should add, for the sims are very attractive). But, as its name suggests, Insilico can also be seen as a metaphor for a computer-based experiment with a community that (hopefully) flourishes and grows in a simulated environment. 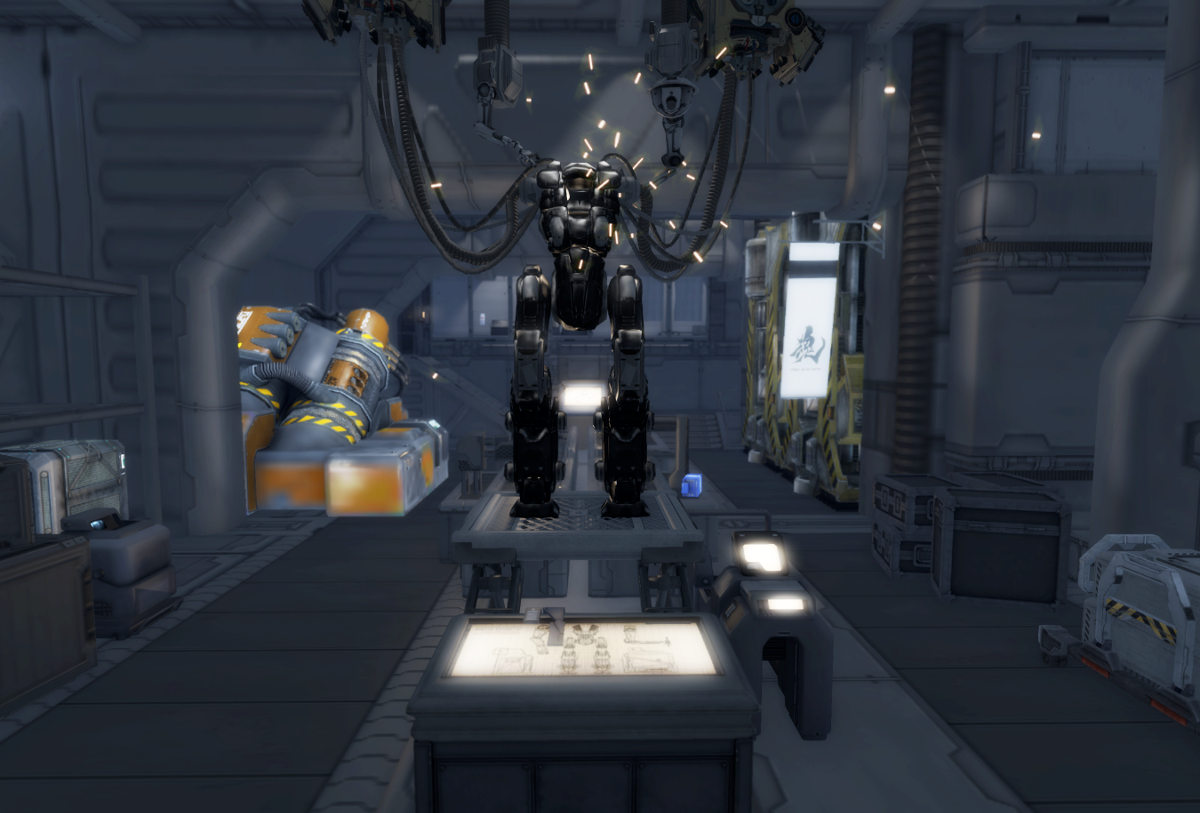 Building a robot at Mars Station 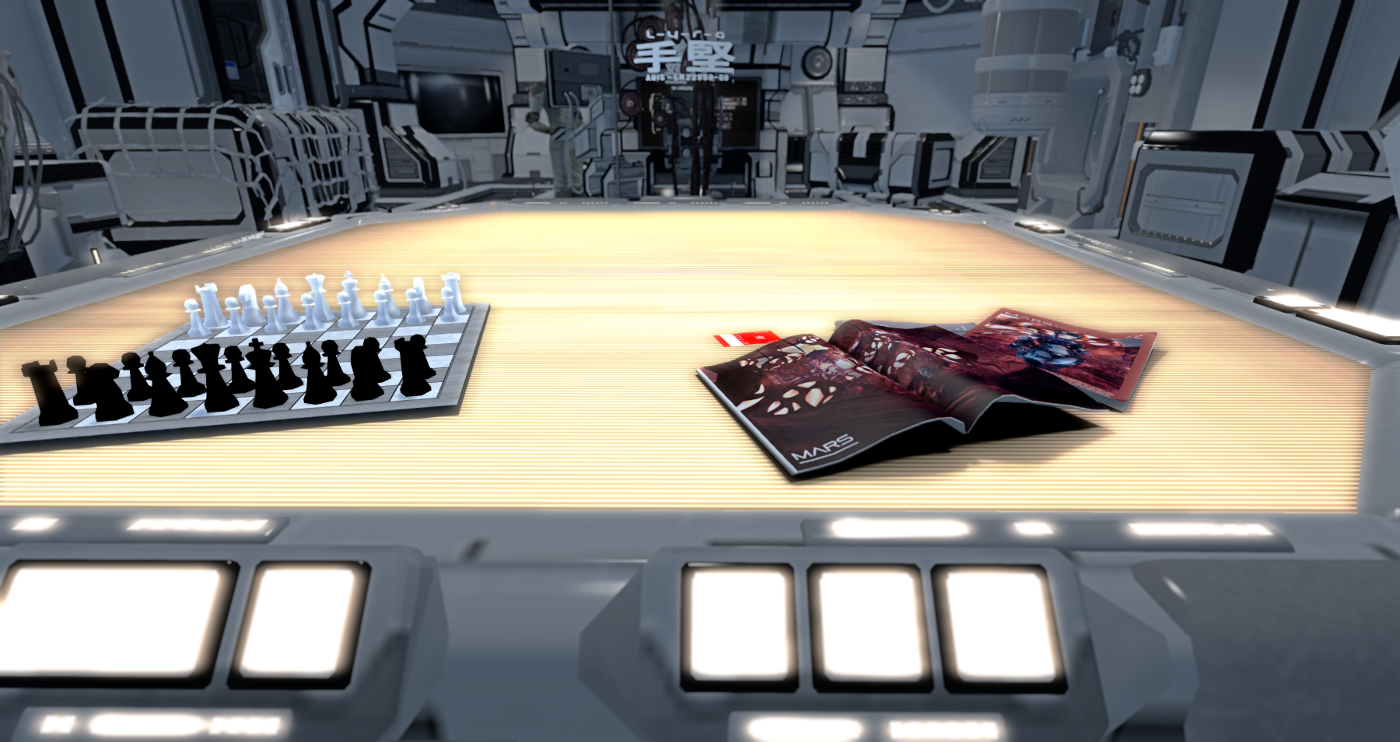 That community capacity for multiplying and renewing itself is one of the main requirements for Insilico’s survival in the current times. With the banning of Skills, the experiment arrived at a critical point in which it has to demonstrate its viability, its capacity to endure, or it will decline and perish (unless it gets sponsored by someone who doesn’t care if it’s sustainable or not, but I wouldn’t count on it). I frankly hope it may survive and progress within time (such a progress, of course, would require a solution for objects that belong to Skills at Insilico, for, if they cannot be transferred or replaced, the sims, in many aspects, will freeze as they are now and evolving will be impossible – but, then, perhaps, it could become a virtual museum in SL, a museum of a past future). 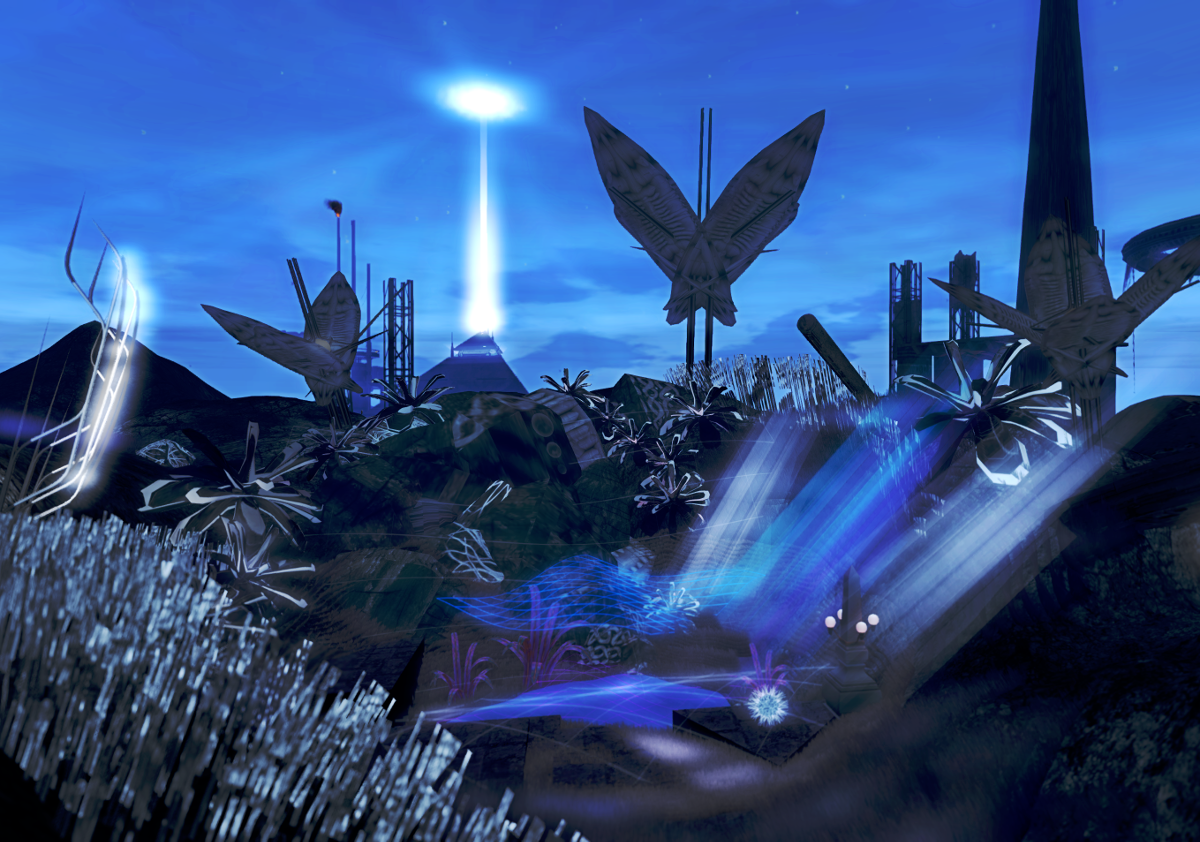