In the night of the winter solstice, the longest one in the year, we gathered before the fireplace and started telling stories, horror stories. Each one of us would mention something that they had heard about, that had happened to a friend of a friend, that had afflicted a distant relative. Not him, though. When he started his narrative, he made it clear that he, himself, had gone through all that anxiety and physical suffering – and his face got somber. These were his words: 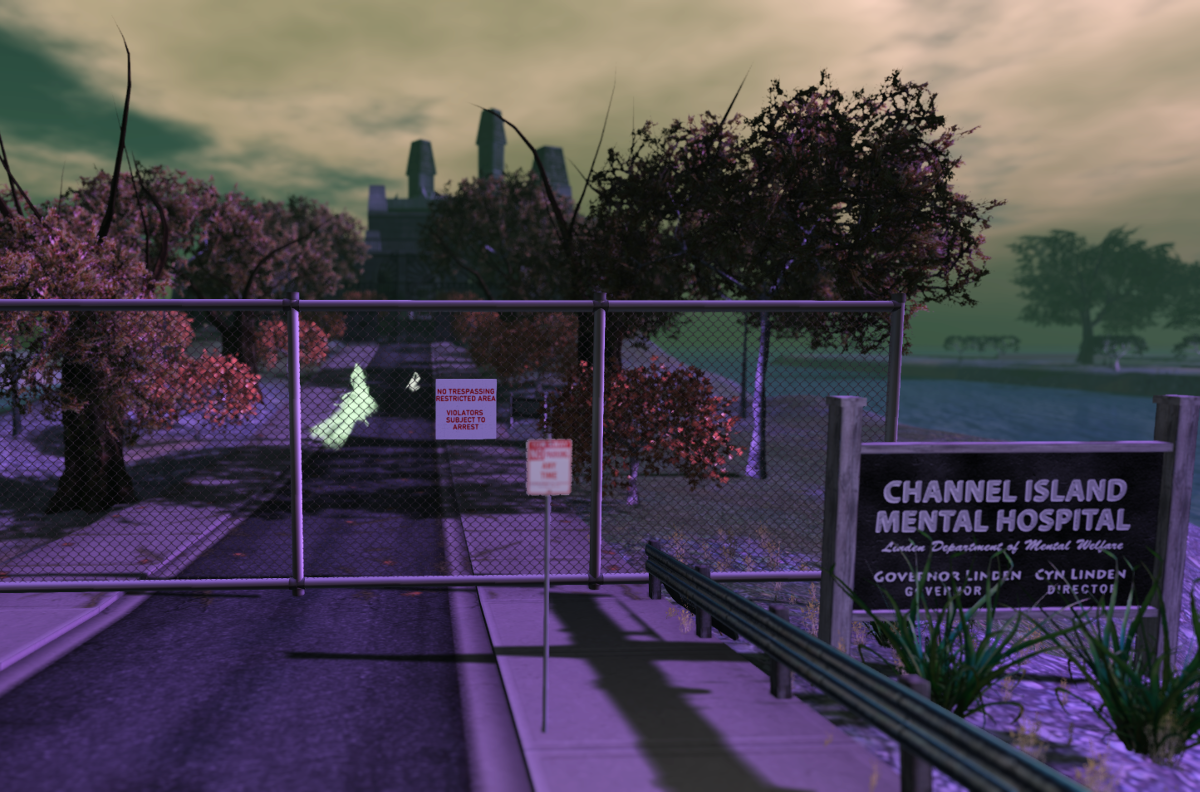 “A few years ago, I got divorced and had to find a place to live on my own. That was when I moved to a cozy house at Bay City, where I still live. The house and the whole neighborhood are great, but, not far from it, there is a mysterious building that lies on what people call Channel Island. That property has always intrigued me. It was an asylum, as one can read on its entrance. Now, it is abandoned. Still, there seemed to be some activity in that place. Though I had never seen anyone, not a single person walking in or out, I could hear noises coming from the old asylum and, hard to explain, I could feel some movement there. A keep-out sign seemed to be enough to ward visitors off, in general, but maybe the building had become a shelter for homeless people? Or maybe someone was working to transform it into something else? If so, why would no one ever appear? One day, out of curiosity, I decided to ignore the signs and go check the asylum.”

When Linden Lab’s CEO Ebbe Altberg hinted that Sansar, the new virtual world LL is creating, won’t have a map – at least not as the one we are used to in Second Life – I started thinking of the whole chain of protected land that Governor Linden maintains in SL, particularly in Mainland. In order to make Mainland’s continents viable, they keep roads, railways, seaways, large portions of protected water (such as Blake Sea) and so on. And, among all those items, there are structures, buildings, monuments and places that constitute, themselves, attractions to SL residents. One of those places is known as Channel Island Asylum at Bay City (or Channel Island Mental Hospital, as it appears on the Destination Guide) and has fascinated me since the very first time I visited it, some years ago. (I’m not saying that, because it will probably have no continuous map as SL does, Sansar cannot have places maintained by LL – it’s just too early to assume that. I am just trying to underline the series of mental associations that led me to write about the Asylum). 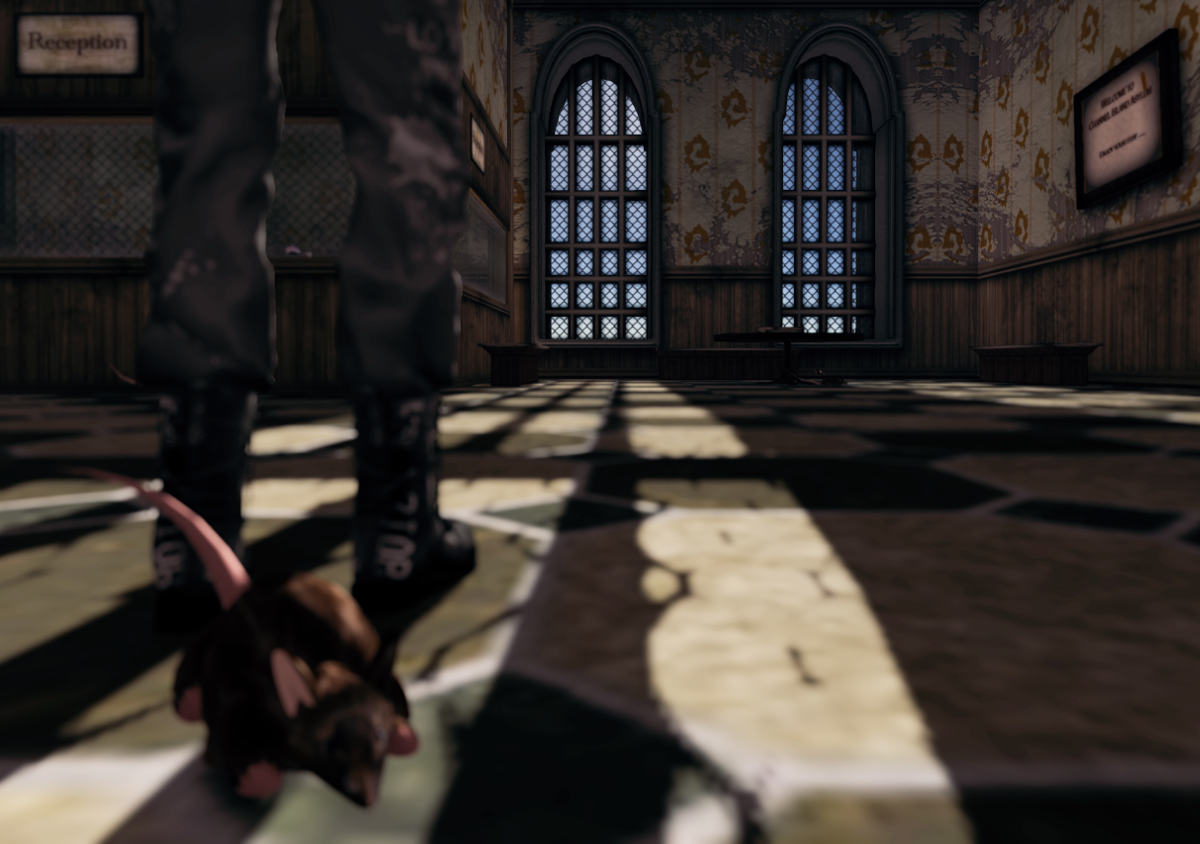 Rats! There were rats everywhere! 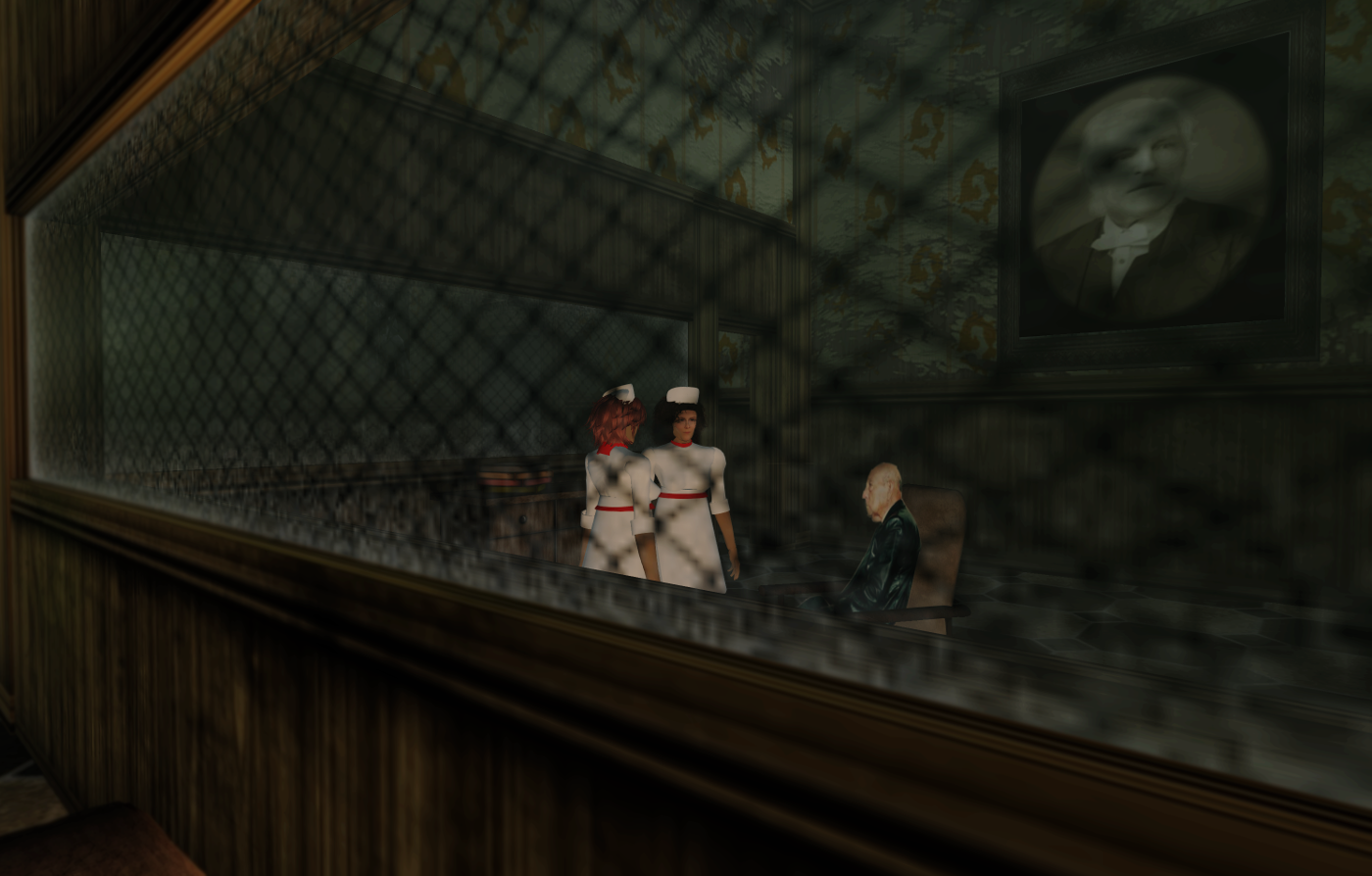 Ghosts at the reception cubicle 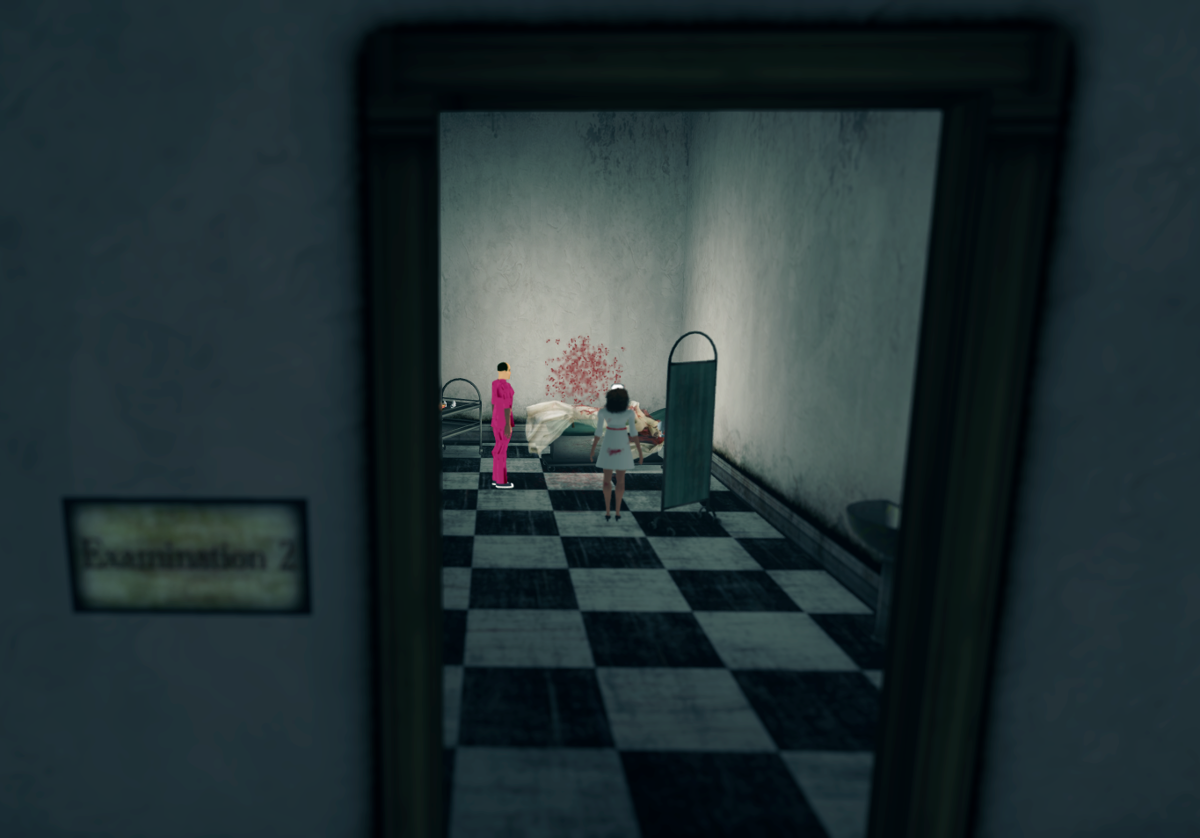 The deafening cry of a woman came from the inner corridors

“As I walked in the building, I noticed things moving all around, running towards all directions on the floor. And what I saw was terrifying: rats! Lots of rats! They were everywhere, coming from all parts. They had taken the old asylum and made it theirs – and I was probably one of the few intruders they had had since the place closed. Recovered from the unpleasant surprise, though, and as disgusted as I could feel, I was also somewhat satisfied that my curiosity had been fulfilled: with that amount of rats it was just natural that I would hear some noise from the street. I took a second look around and decided it was time to leave. Who knows in what conditions the building was and if it was safe to stay there – and what diseases those repulsive animals could bring with them? It was then that something else called my attention, and it was no rat: I heard voices coming from the old reception, human voices. My eyes turned in that direction and I saw, or I thought I had seen, people there. I walked towards the cubicle, but, as I approached, I realized that there was no one. In the very moment I reached the reception door, this cry came from the inner corridors, this deafening cry of a woman asking for help. Instinctively, I ran into the main hallway and, before I could decide where to go, I stopped all of a sudden, paralysed by the worst sensation of fear I had ever felt in my whole life.” 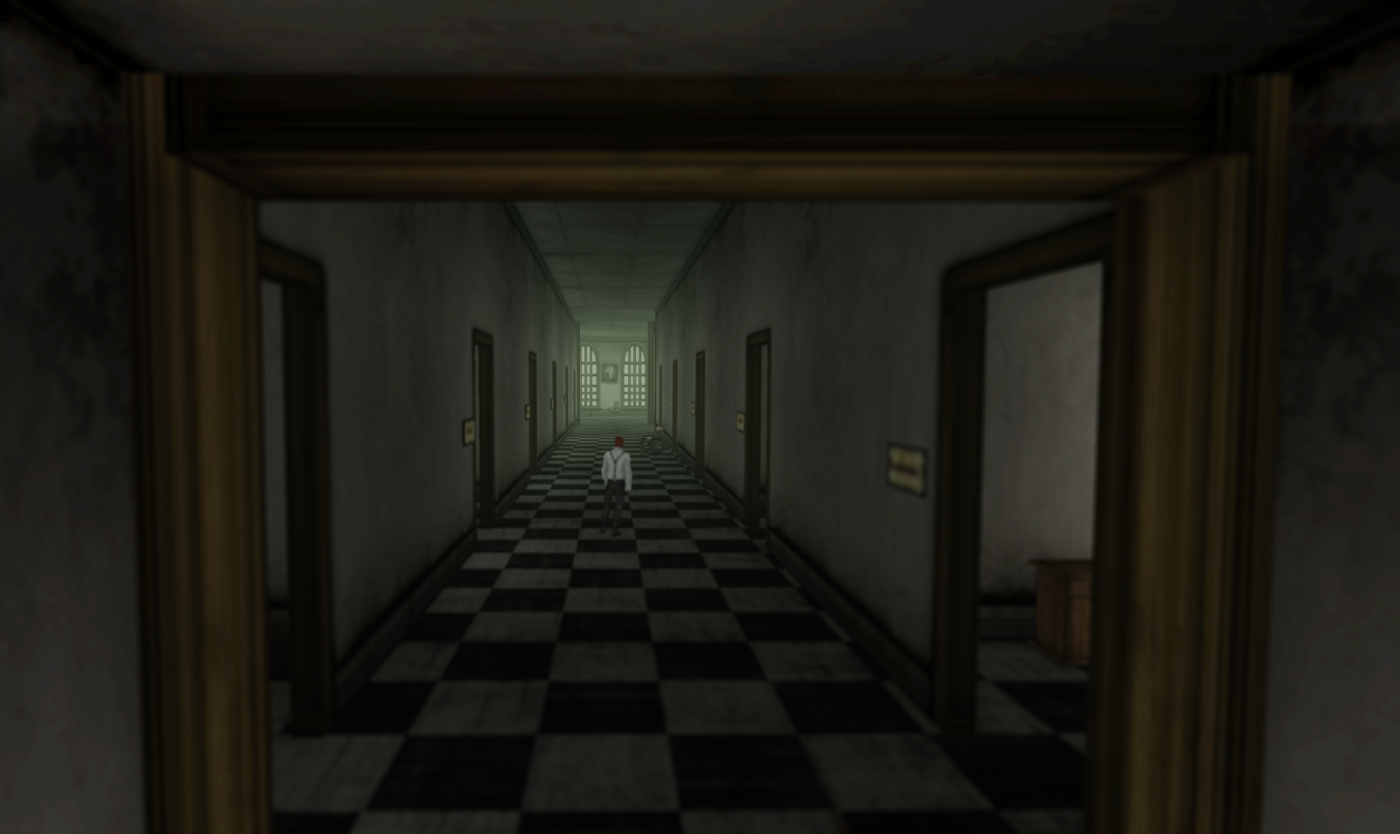 “I stopped all of a sudden, paralysed by the worst sensation of fear I had ever felt”

The Asylum at Channel Island is located between Bay City and Nova Albion. I don’t know if it was conceived as such, but it was featured by Linden Lab as one of the selected locations for Halloween in 2009 and, luckily, it remains on the grid since then. It has actually become a traditional Halloween attraction at Bay City, in the subsequent years. In times dominated by all-mesh buildings, it’s amazing how, despite some old-fashioned elements (compared to the current technological aspects of SL), the asylum mostly keeps its spookiness. 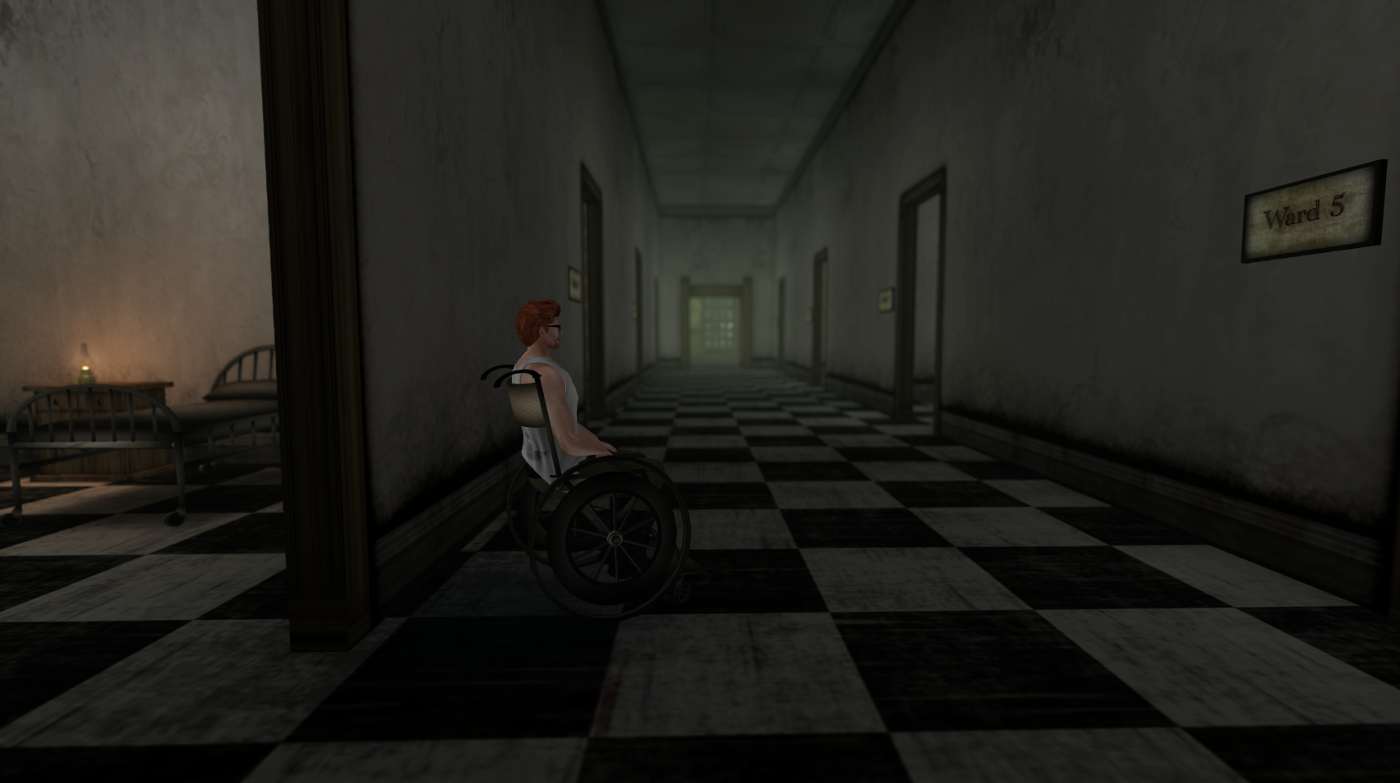 “I was on a wheelchair, feeling dizzy”

“The next thing I remember is that I was on a wheel chair, feeling weak. They had changed my clothes, but who?, and I was dizzy. I didn’t know how long I had been there. It could have been days, I had no idea – and I became anxious at the thought of having been kept there for so long. Soon, a woman, a nurse, took me to bed. I tried to say something, but I could just mumble. I made an effort, but the words wouldn’t come clearly. I kept trying, I didn’t belong there, I had to explain it to someone, ask them to call my family, my friends! Before I’d overcome my difficulties, I was given a shot and fell asleep. That night, at some point, I briefly opened my eyes and I saw it, I saw this presence, a ghostly presence, and all the rest was darkness.” 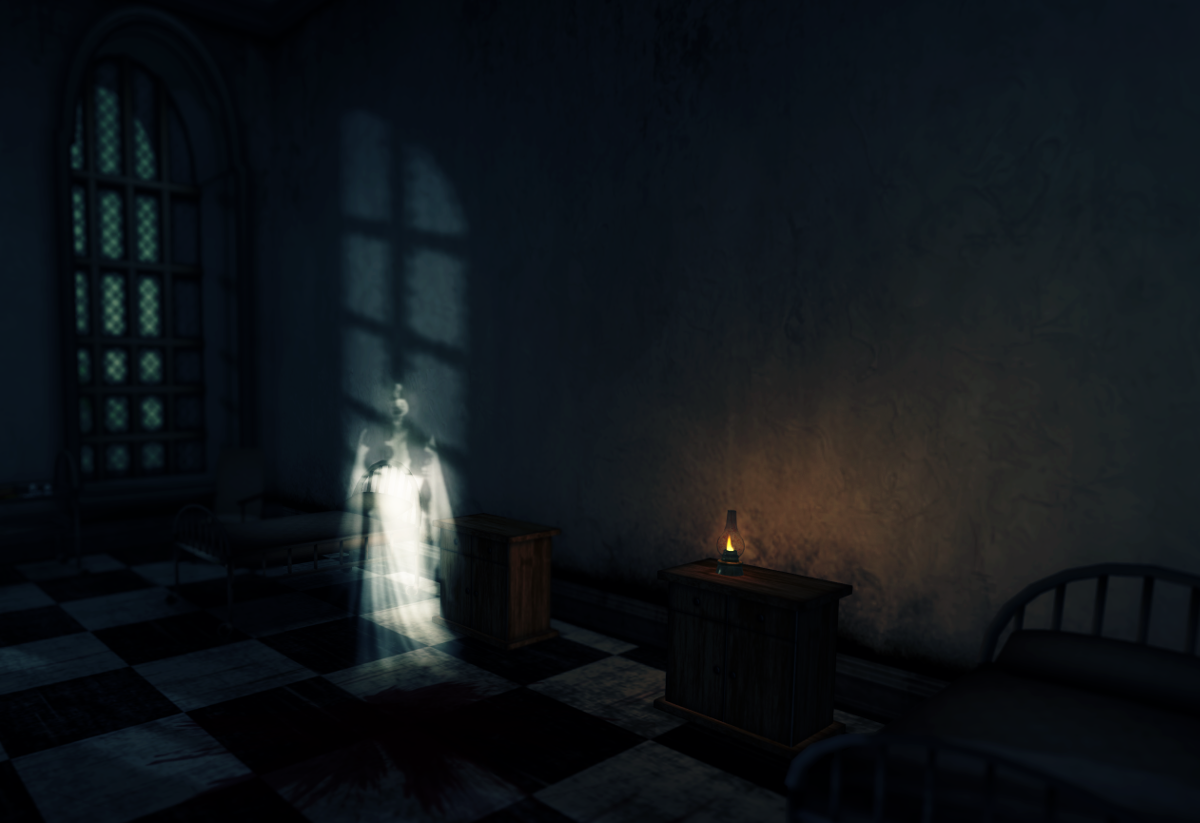 A ghosty presence in the room 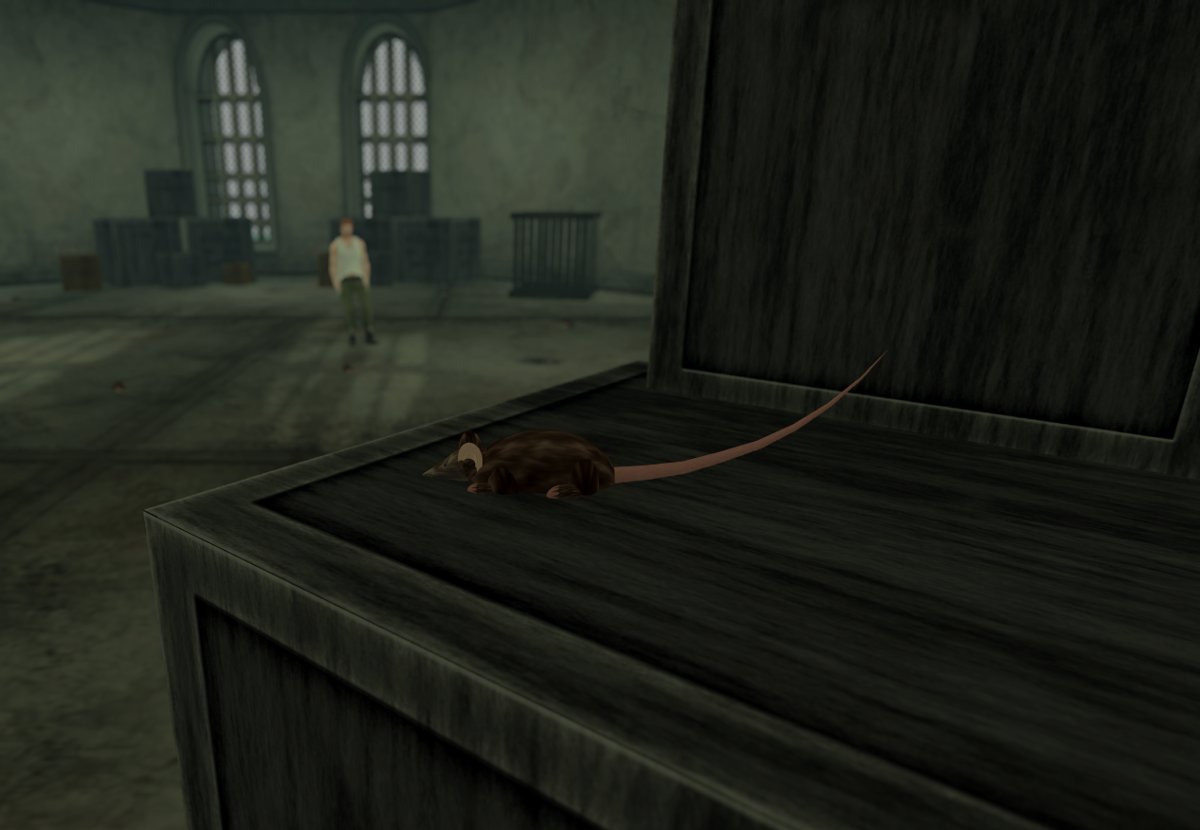 On the second floor, more rats

The abandoned Channel Island Asylum was made to look like those old mental hospitals that populate the imagery of the horror stories. It has three floors, populated with rats and ghosts. The background sounds, the wind, water flowing, drops of water, child laughs, patients’ sighs, people knocking on doors, rats squeaking – it all adds to the creepy atmosphere there. 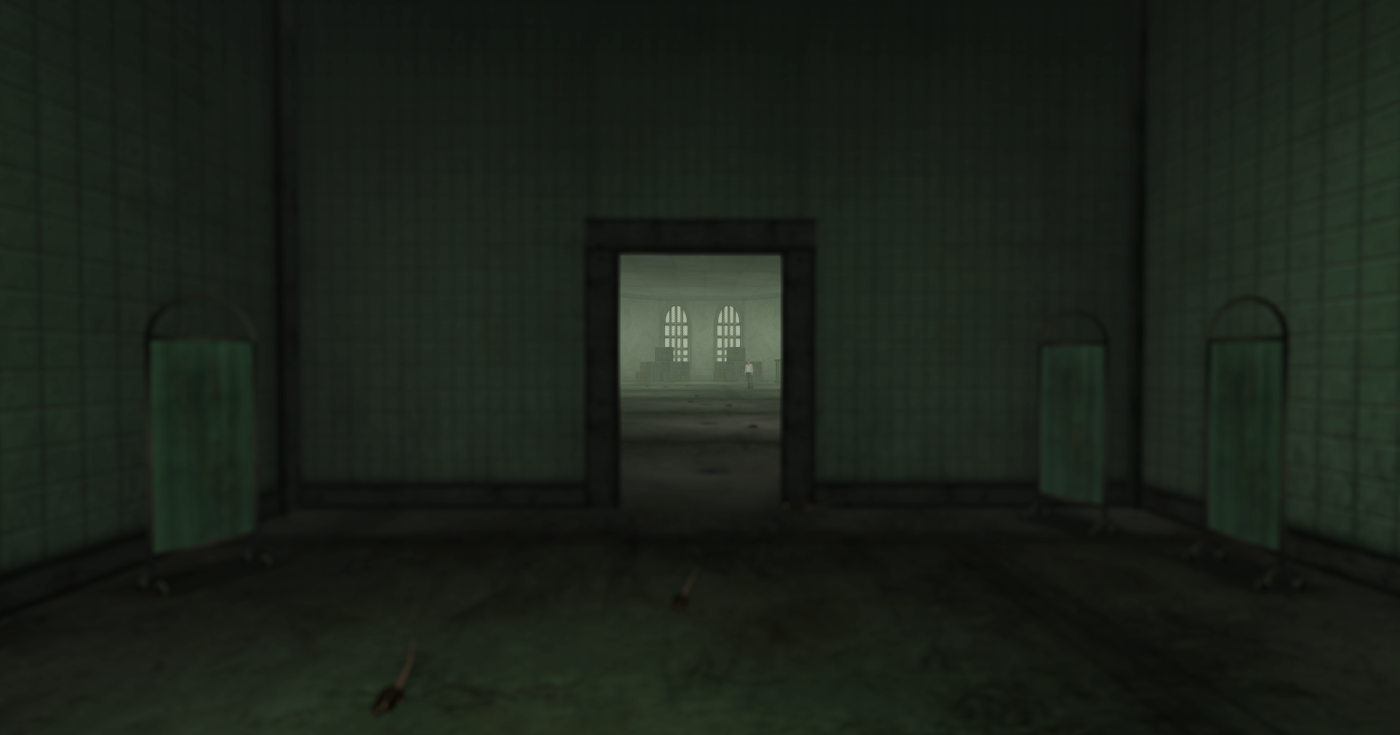 The hallway on the second floor, seen from the surgery room 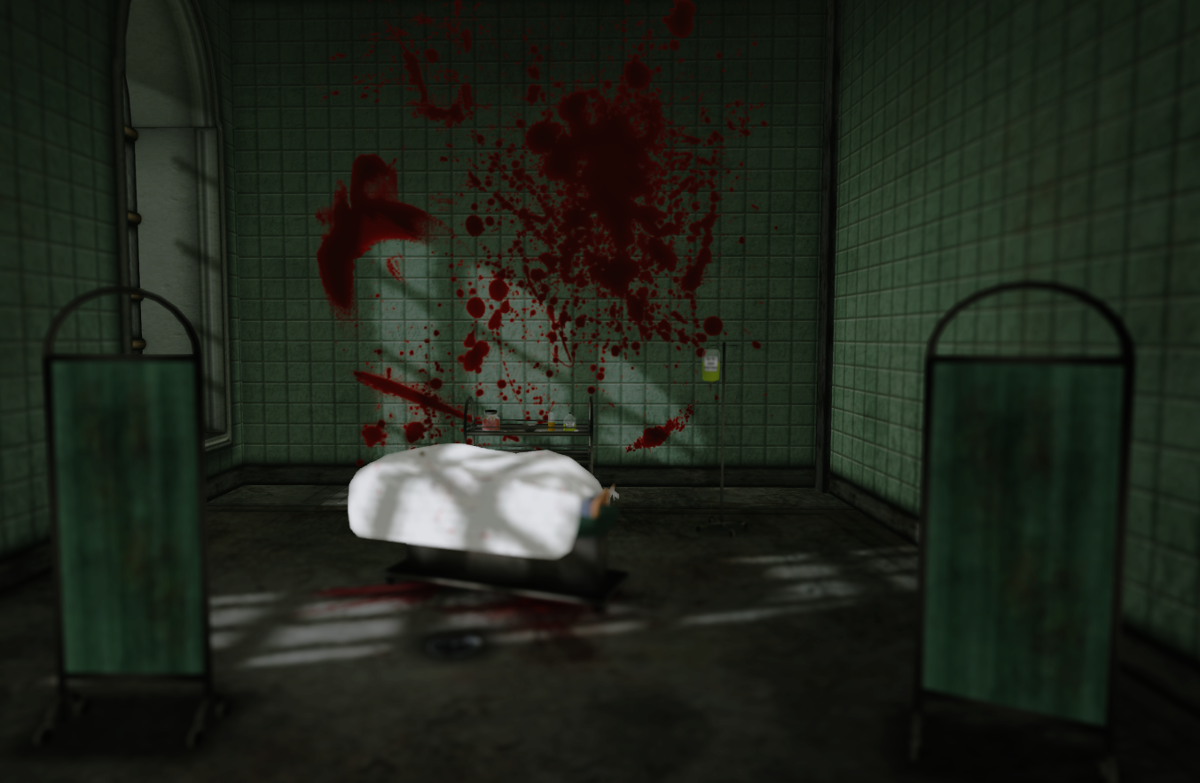 A body in the surgery room 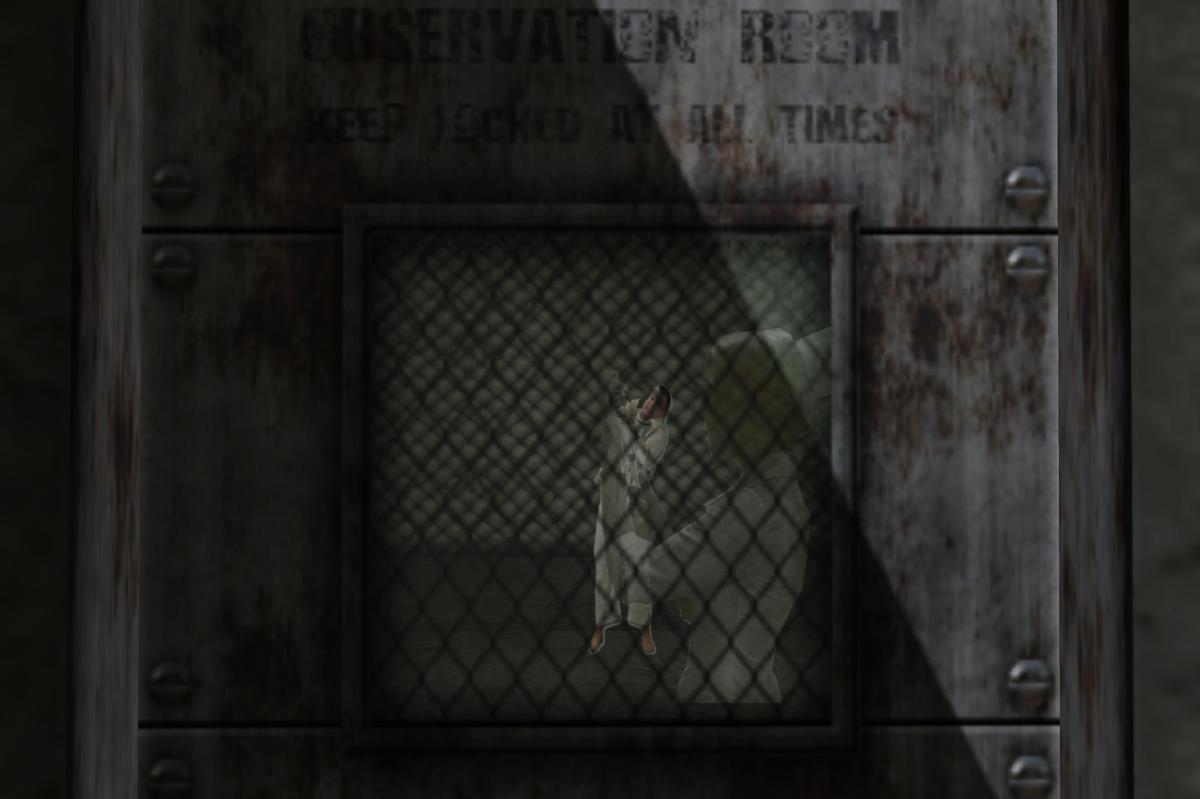 A nurse and a patient: ghosts

“For a while, my routine went like that, I would feel dizzy all the time and be taken to bed by a nurse who would give me a shot and I would fall asleep. I don’t know how many days I spent in that state. Then, all of a sudden, one morning I woke up feeling great. I was surprised and stood up carefully, trying to make no sound, but soon I realized that there was no one there, no one near me. It seemed that there was no one around at all. So I decided to check the rest of the place. I don’t know why I thought I had to do that, I just did. I climbed the stairs and arrived at a hallway with cells – you know, those cells for insane people. I went down the hallway and found a surgery room – and there was a body in there! The walls were all covered in blood and there was a body! I ran all the way back and, when passing by the cells again, I saw them, the patients, I saw a nurse, I saw them all!” 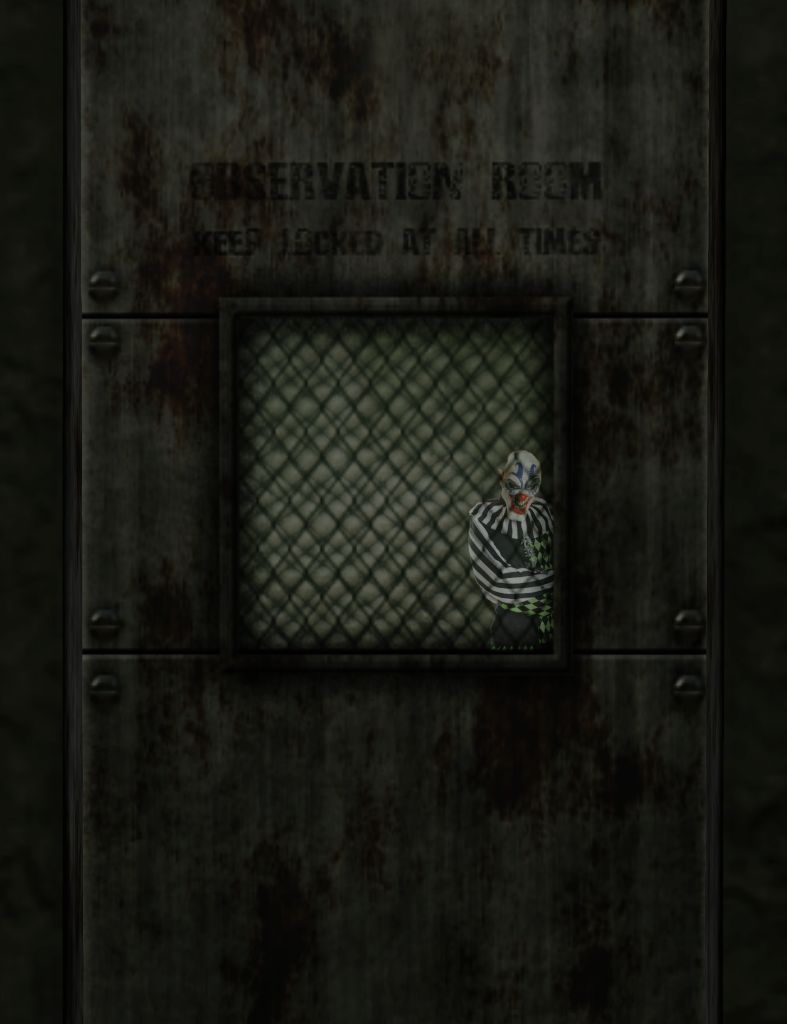 Patient in a cell?

On the third floor there’s a gift for visitors – Thing In A Crate, a creature that will talk to you when you click on it. You can take a copy for free, and it’s worth it, even if it has a high land impact for today’s standards (but not for the time when it was built). It’s a funny souvenir, for sure. 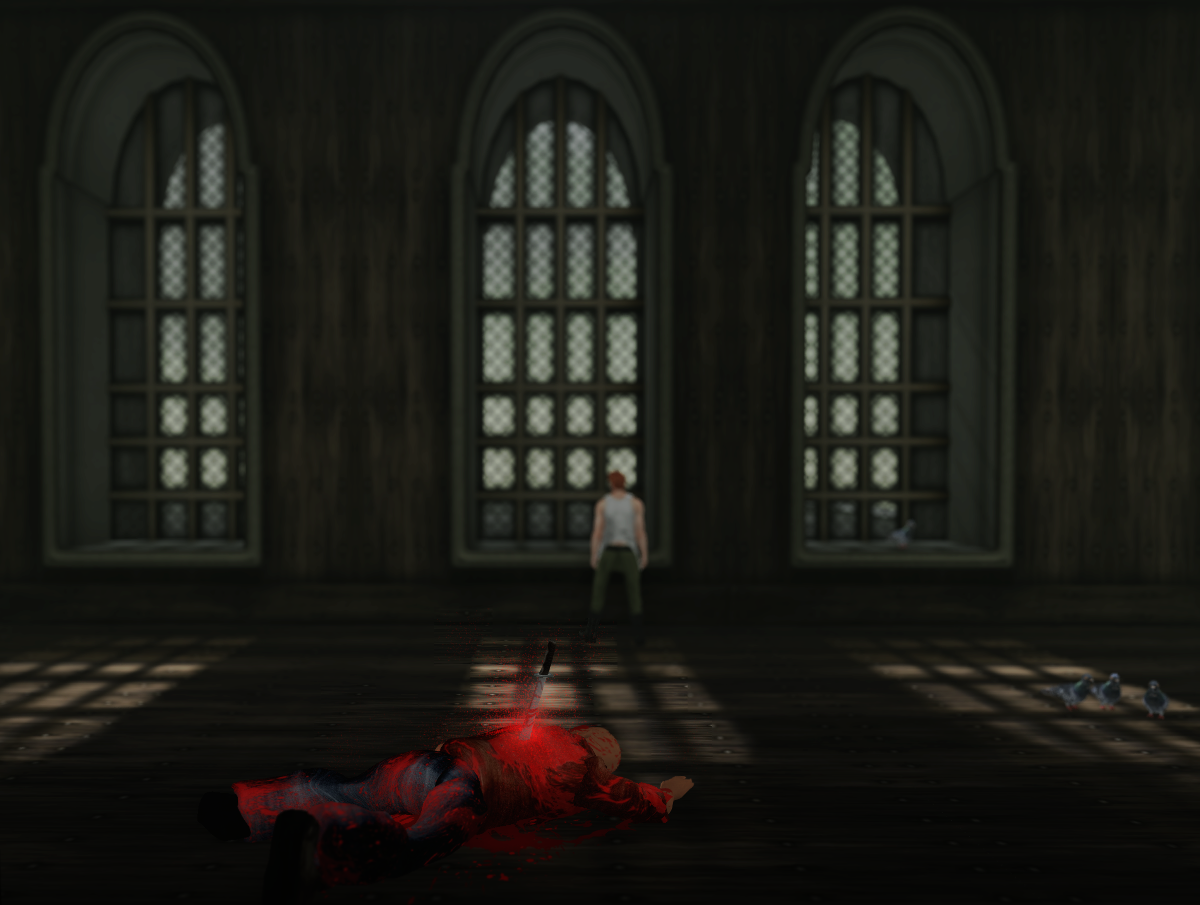 A body with a knife on its back 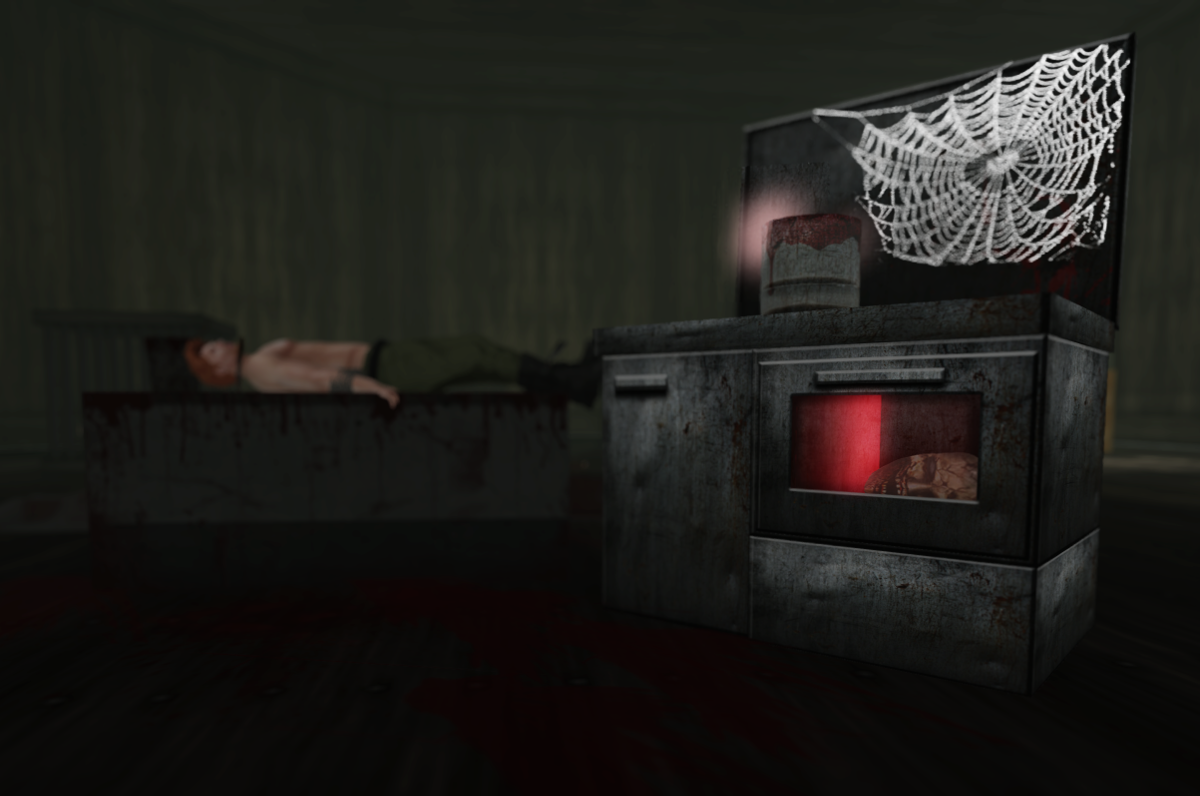 “They would cut me in parts” 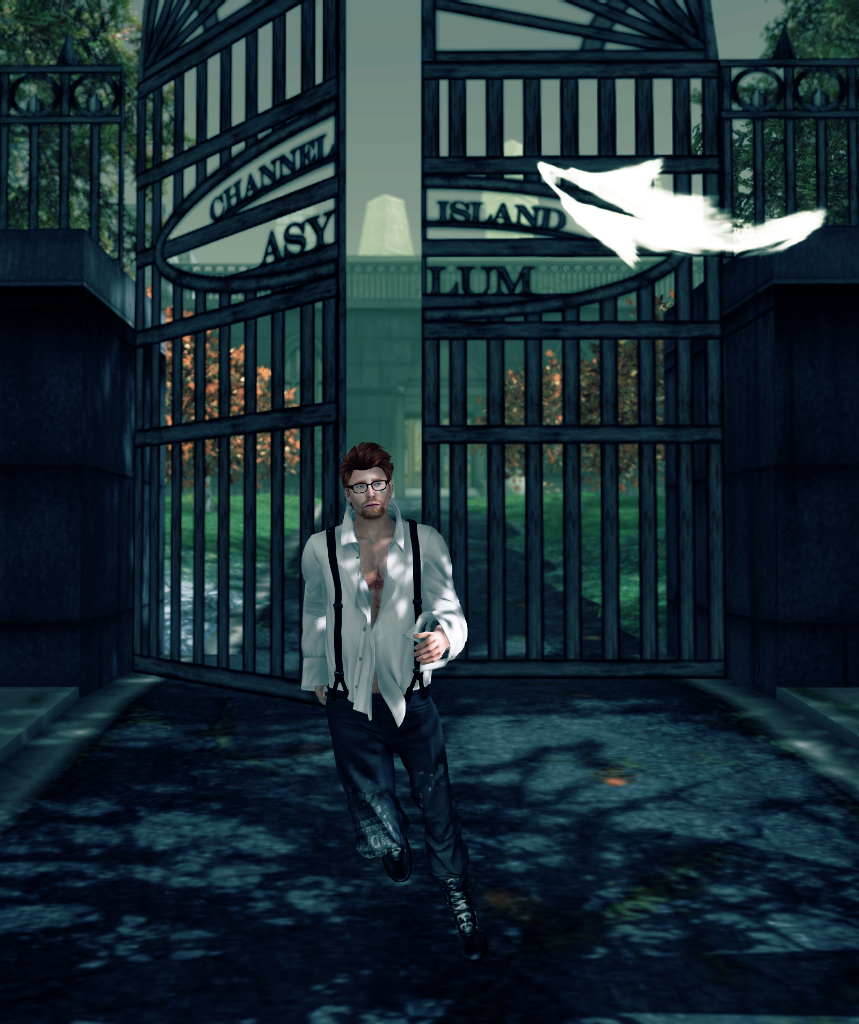 “I knew I had to go downstairs and try to escape, but I heard noises coming from there and decided to climb a ladder that, I suspected, would lead me to the attic. I though of hiding for a while until I could safely make my way out of that damned place. Arriving upstairs, though, when my eyes got used to the darkness, I had the most horrific vision of all: I saw a body with a knife or something buried in its back, and I saw blood everywhere, and, before the body, I saw myself… I was there, standing, looking through the window, giving my back to the dead man. I decided I had to go closer, it couldn’t be that I was seeing me! As I approached, something, someone talked to me – this thing in a crate! I can’t remember its words, I can’t even swear it was human. Then I turned back and saw myself again, but this time I was laying on a table, tied up, and it seemed that someone would come and cut me in parts and cook my flesh! I did not think at all, I just ran as fast as I could and got out of that freaky asylum. Later, I realized I had my original clothes on and, when I told a friend of mine about my experience, he said it was impossible, for it would have meant I was kept there for days and he had seen me the day before. Actually, not a single day had passed since I had woken up in the morning that I decided to check the place – and yet, it all felt like an eternity.”

The Asylum at Channel Island is just one example of the atractions that Second Life’s Mainland – with its copntinuous world map – holds to its visitors. In order to check the place, just follow this link, open the destination teleport request on your favorite viewer and have fun!

“How do I know it was not a dream or some hallucination? Come visit me someday, and you’ll get to meet Thing In A Crate, who’s been a good buddy since then.” And he laughed. We all laughed. 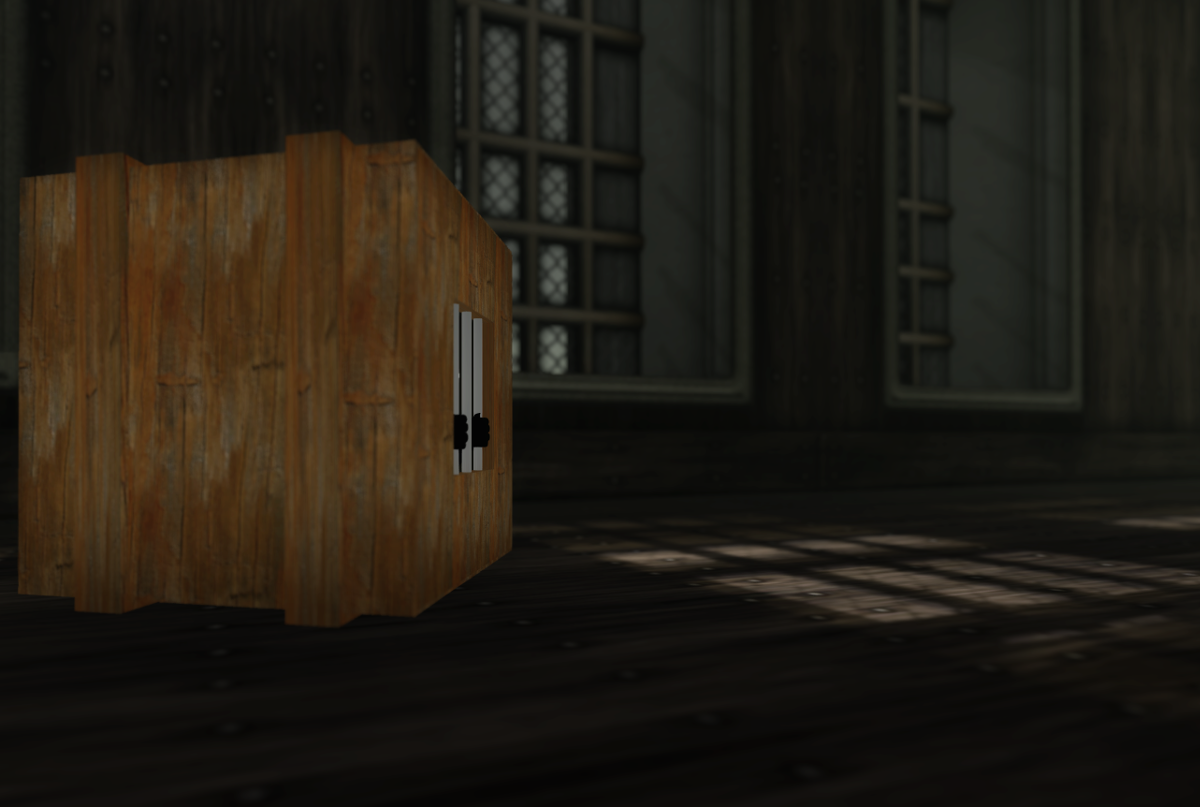 Thing In A Crate: a gift to the visitors