The possibility of walking on a map of New York made in 1836, of adding a personal landmark to a late 18th century world map or of seeing a projection of a historical topographical map of Yosemite Valley – all that and much more is what the David Rumsey Maps sims offer to its visitors in SL. The place is made of digitalized versions of actual cartographical material in the impressive David Rumsey Map Collection, one of the largest of its kind in the world, and provides a unique way to be in contact with some of its most interesting items.

The collection, in the atomic world, gathers over 150,000 maps, with a focus on the rare ones, from the 16th to the 21st century. More than 66,000 items have been digitalized since 1996 and can be seen in a variety of means, including special browsers and applications, Google Maps and Google Earth, among others. The scanning has been set to result in high-resolution images, with at least 300 pixels per inch.

In Second Life, one can see a small, but significant, part of the collection – and the virtual material has been growing since 2008, when The David Rumsey Maps sims opened, which shows that the place has been, at least in part, catching up with the changes in SL. One of the most significant consequences of having the maps uploaded to the virtual world created by Linden Lab is that, there, one can interact with each item in a very particular way.

The 1787 world map by Samuel Dunn, with visitors personal landmarks

At the arrival point, one finds a world map which shows, at once, that the place is about experiencing cartography. It’s a digital version of a 1787 map by Samuel Dunn – and, on it, one can see a number of red pins, highlighting different cities. The pins can be rezzed by clicking on the right upper corner of the map and then you can move them to the city that you live in or where you are from and add some information to them. This way, on the one hand, you can leave your mark on the map and, on the other hand, the map can show how the visitors that the sims receive are distributed around the planet.

I strongly advise first time visitors to click on the kiosks, at the arrival point, that offer information about the maps. In one of the notecards distributed, you can learn, for instance, that the interpretation of Samuel Dunn’s map for Second Life “was done by segmenting the original [item] into one hundred ninety-seven 1000-pixel square textures. Each texture was applied to a 5-meter-square primitive, then laid out to recreate the map. The pushpins send residents’ hometowns and stories to a web-based database, where it will be displayed in future interpretations.” 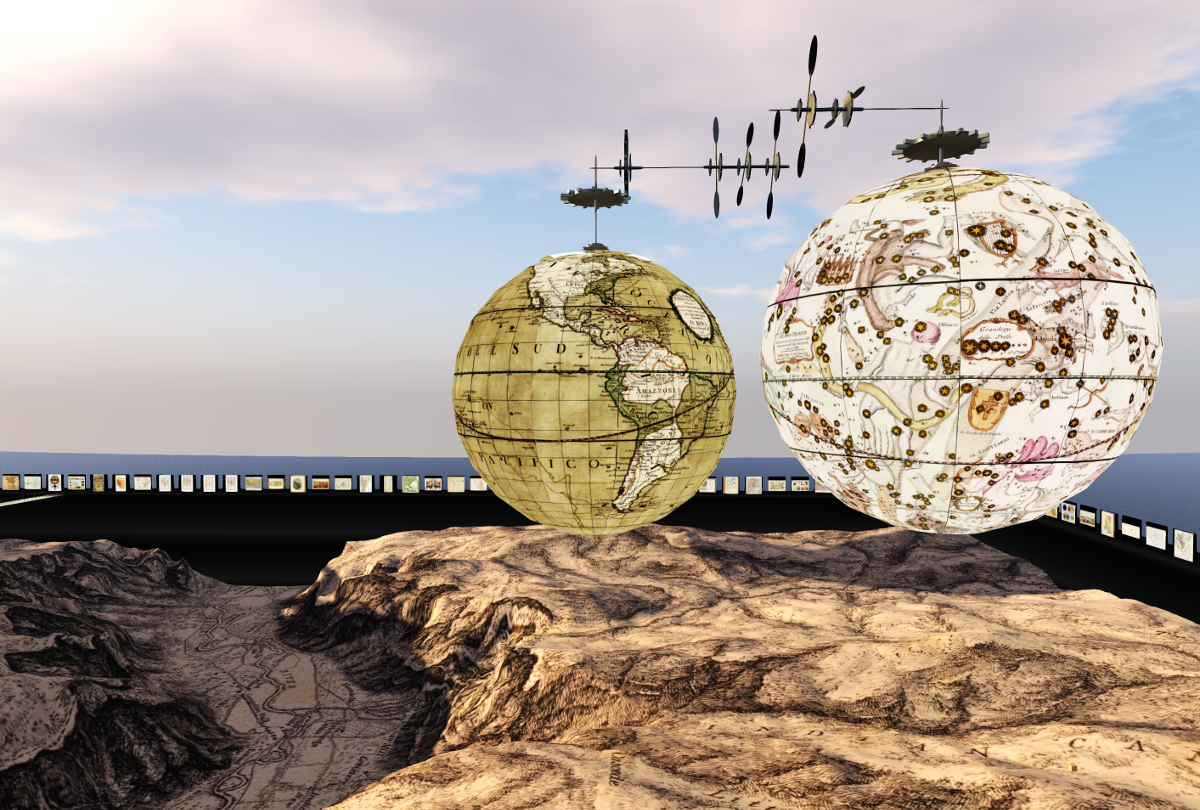 Flying globes over the Yosemite Valley

One soon realizes, too, that the platforms where the visitors walk have been rezzed above a topographical map of the Yosemite Valley, which was made in 1883 by George M. Wheeler. In SL, the map was transformed into a projection that allows people to see the relief that the drawings were meant to represent. On the center point of the complex of sims, there are some controls by which one can choose between the plane map or the relief projection, in full bright or not. 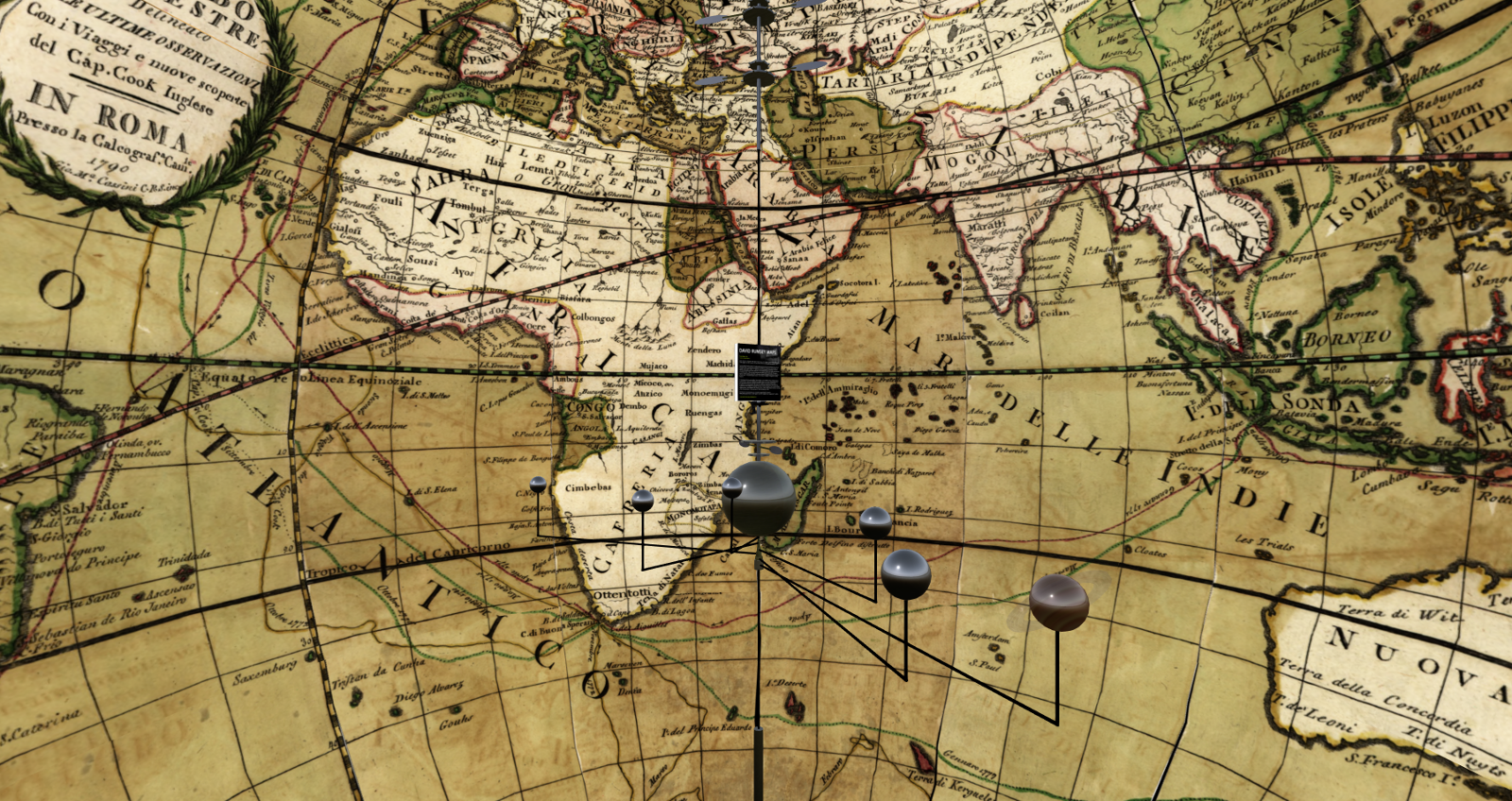 Inside the earth globe

Floating above Yosemite Valley, there are two spheres: a world globe and a celestial globe, both created according to the drawings by Giovanni Maria Cassini in 1790 and 1792, respectively. The earth representation shows the new discoveries of the time and routes of voyages taken by Captain James Cook and his crew. The celestial one is a decorative projection of constellations as seen by an observer at the center of the earth. In both cases, the visitor can go through the globe walls, crossing towards inside or outside, thus inverting the observer point of view. This is particularly interesting in the case of the celestial sphere. 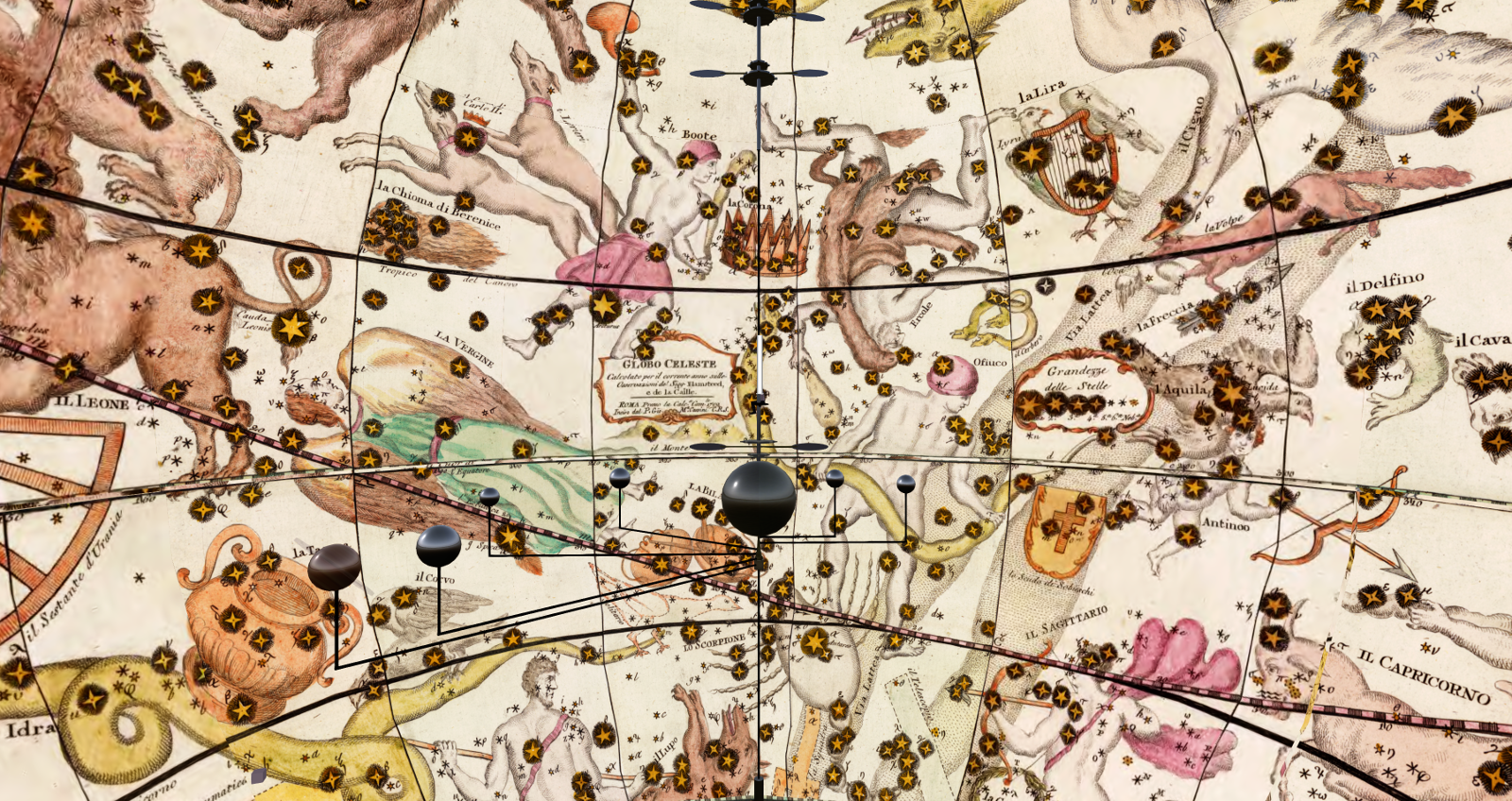 The celestial globe seen from inside

Celestial globes are representations of celestial bodies as seen in the sky from the earth. Nonetheless, the globes are generally seen from outside, whereas the earth is imagined to be on the center of the spherical space. This causes a problem which requires a choice in the atomic world: either the celestial bodies are kept in their original position, as seen from the center, and the observer, who is outside the globe, will see them as if they were in a mirror; or they are represented in a mirrored disposition, so that the observer will see them as they are seen from inside the globe, but their orientation towards earth will be distorted. In SL, that problem has a different solution: the observer can go inside and outside the globe, thus being able to see the celestial representation from both points of view – and, in the globe, they can even gravitate around the earth, by taking a seat on a clockwork-like rotation machine.

The Grand Canyon mural above the Yosemite Valley 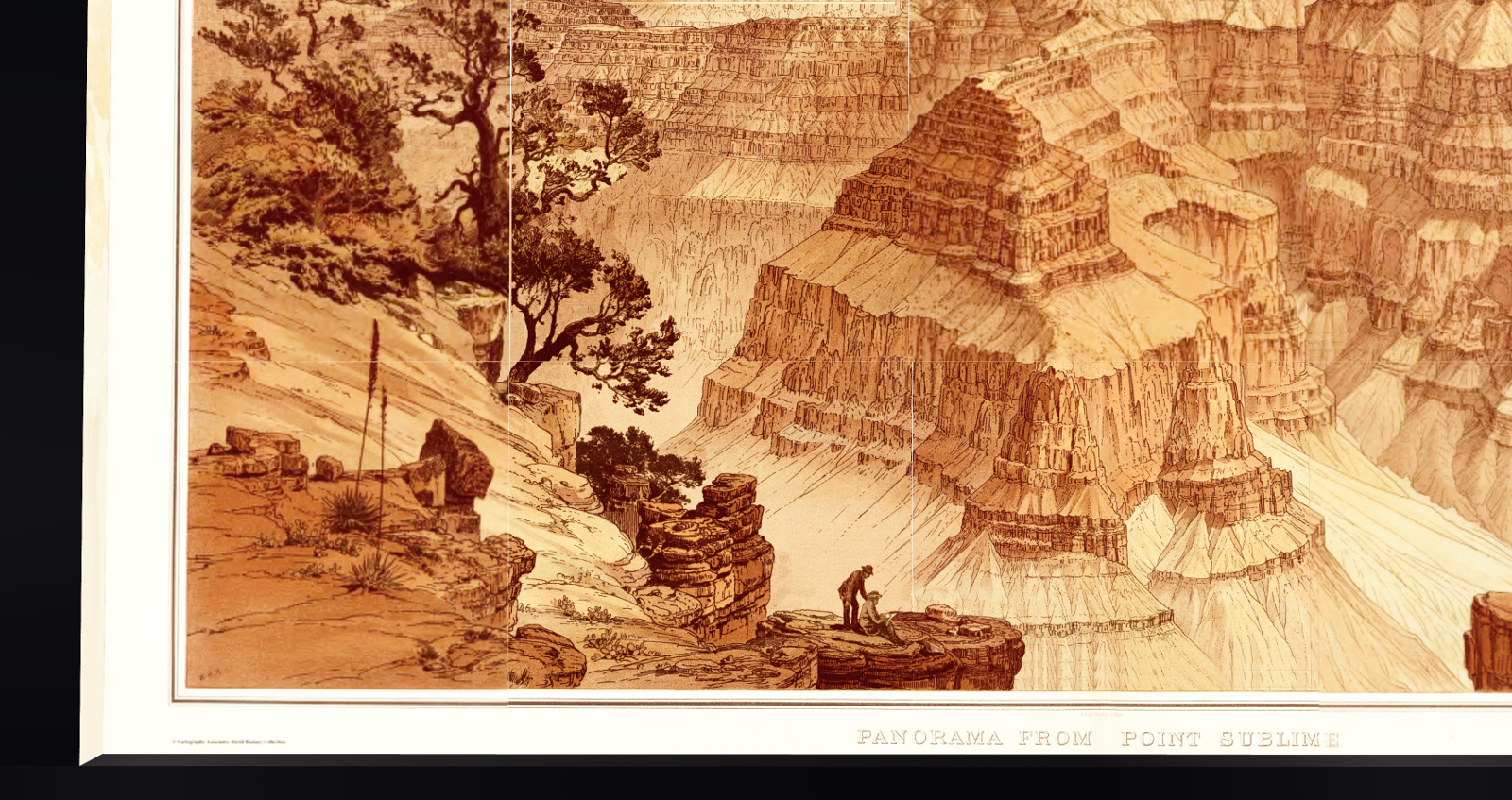 Portrait of the artist: William Henry Holmes seems to have depicted himself on the Grand Canyon perspective drawing

On one side of the sim complex, the visitor can also find an impressive panorama drawing of Grand Canyon, made in 1882 by William Henry Holmes. In SL, it was made in layers, what increases the perception of perspective. On the left lower corner of the drawing, Holmes seems to have depicted himself working. 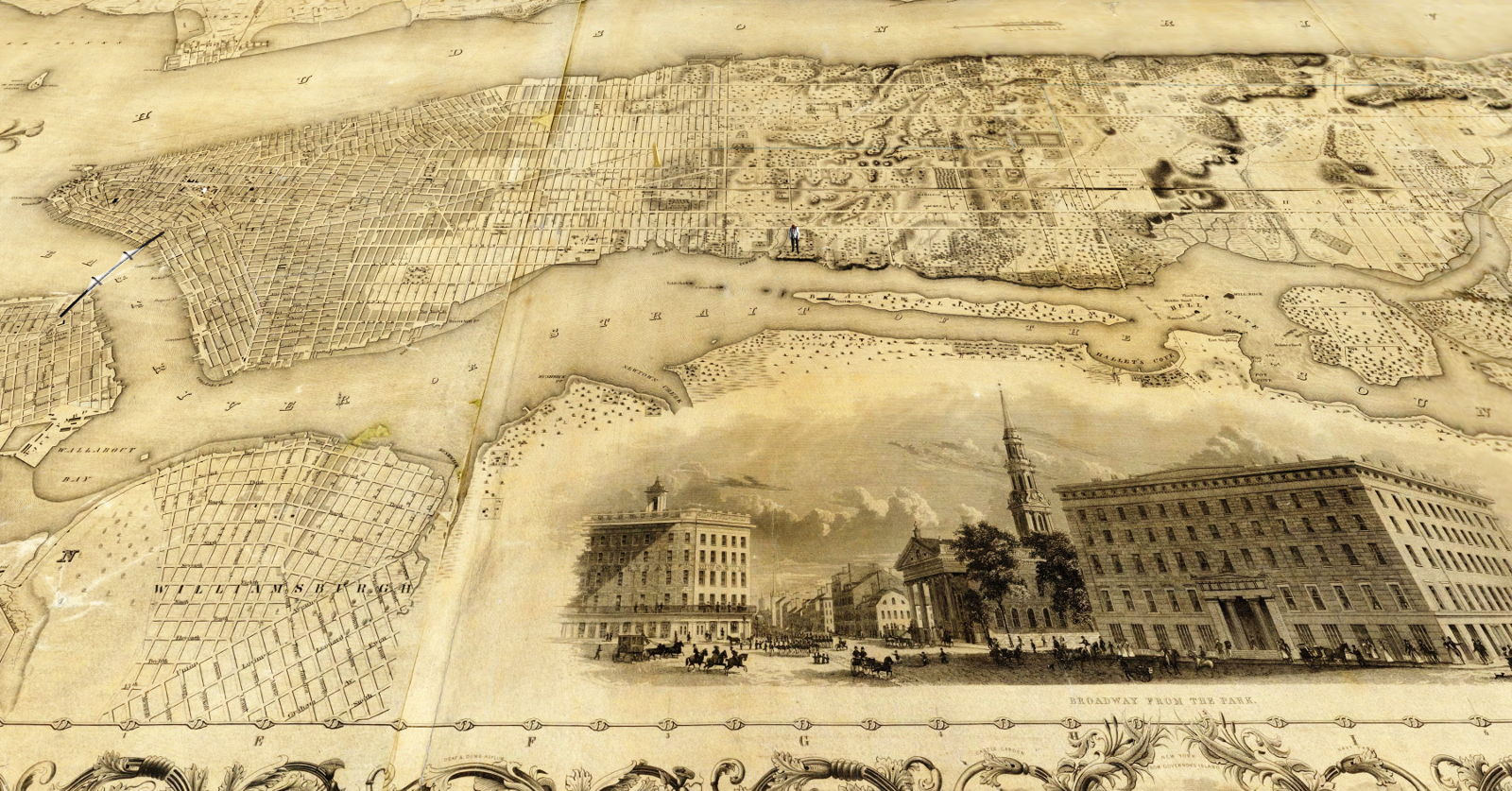 A 19th century map of New York City by J.H. Colton, on which visitors can walk 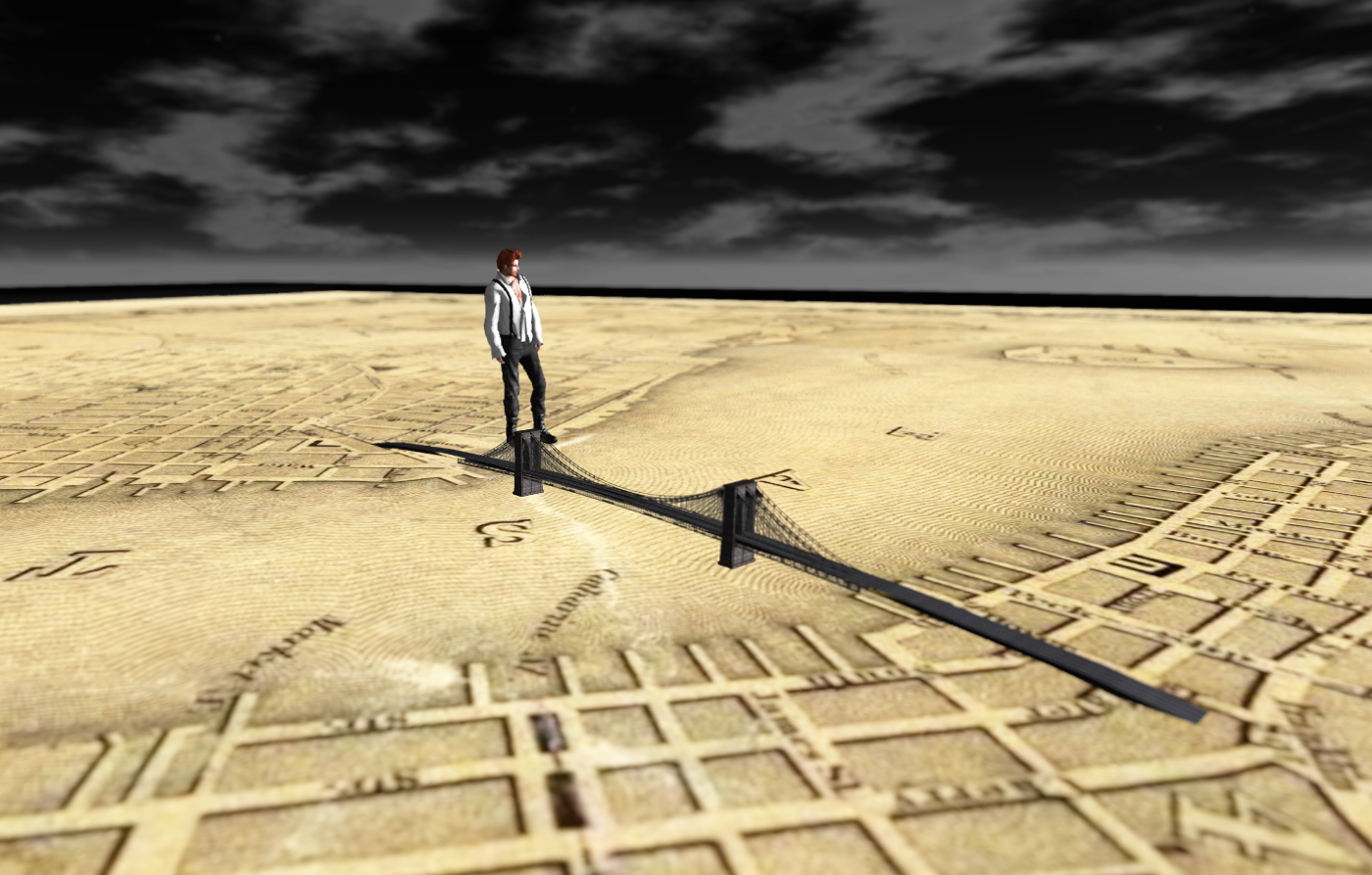 Ricco and the Brooklyn Bridge on the old New York map 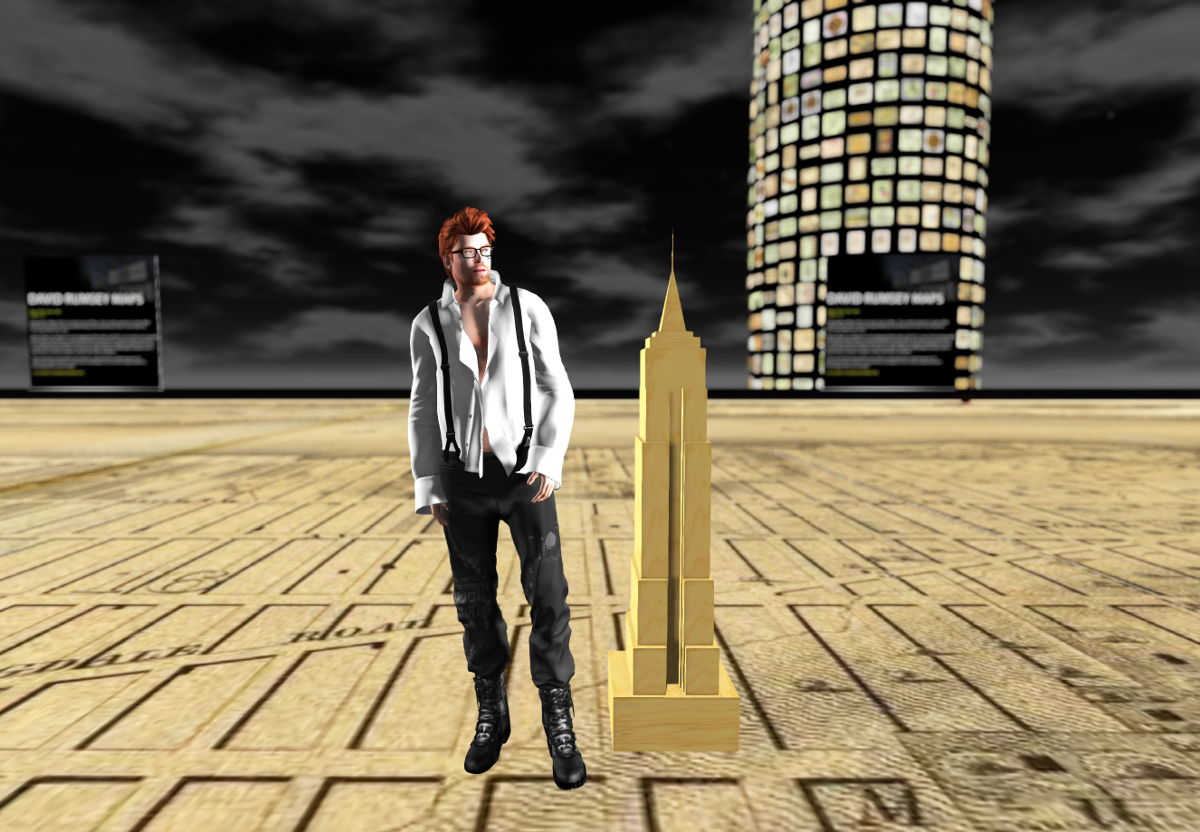 Ricco and the Empire State Building on the map by J.H. Colton

On another platform, higher above, there is a map of New York City dated of 1836, by J.H. Colton. As the information notecard says, “Central Park did not exist [back then], and most of Manhattan Island north of 42nd Street is shown as streams, woods, hills, fields, and farms”. Some iconic landmarks of New York were added to the map, including the Brooklyn Bridge and the Empire State Building, that weren’t there, either, when the map was made (the bridge was built between 1869 and 1883 and the Empire State, from 1930 to 1931). Those additions actually help to increase the link between past and present, bringing into evidence the transformations of the city. Visitors can travel on the map by walking or by using driveable map pointers. 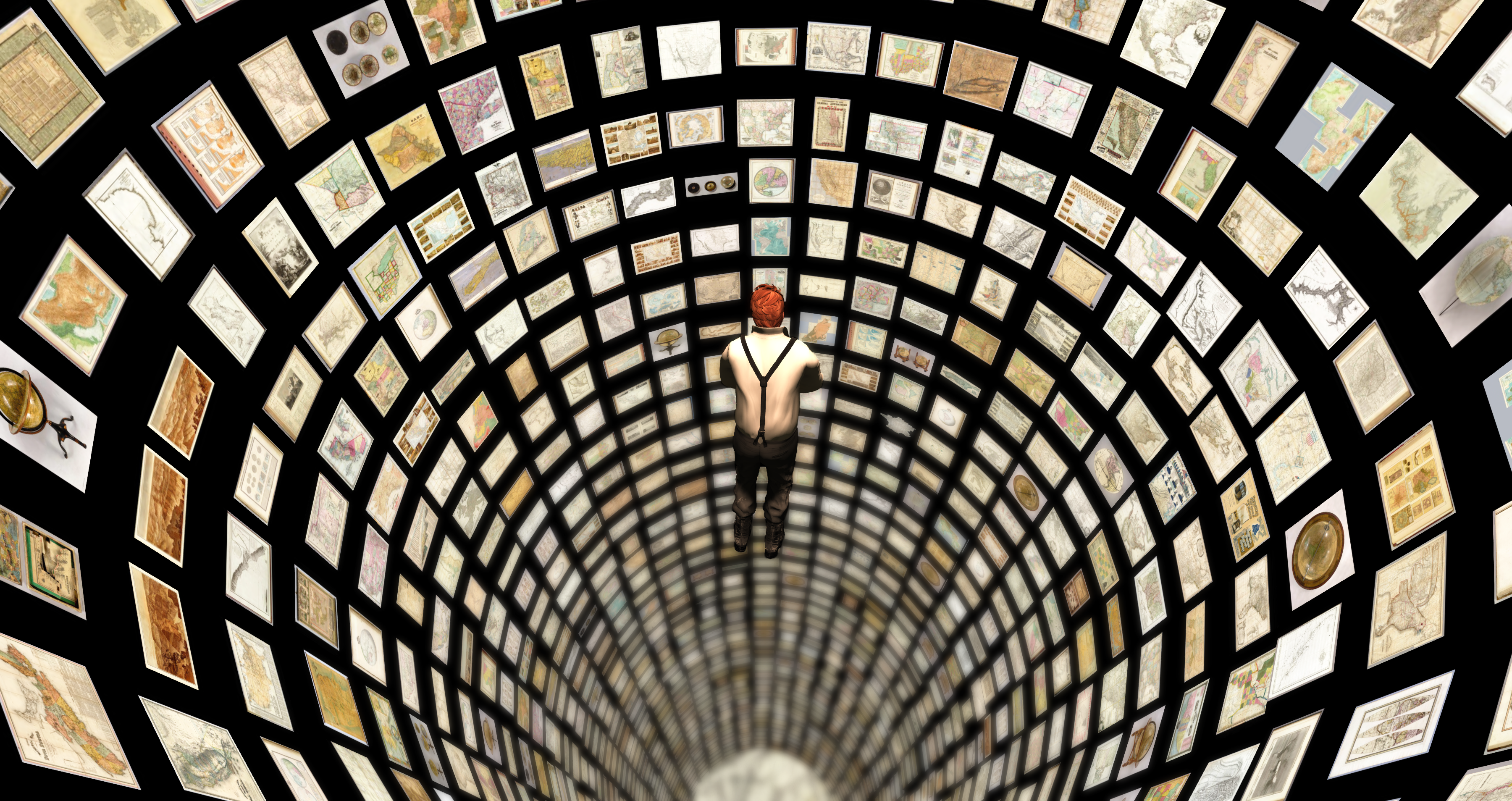 Flying in the map tower 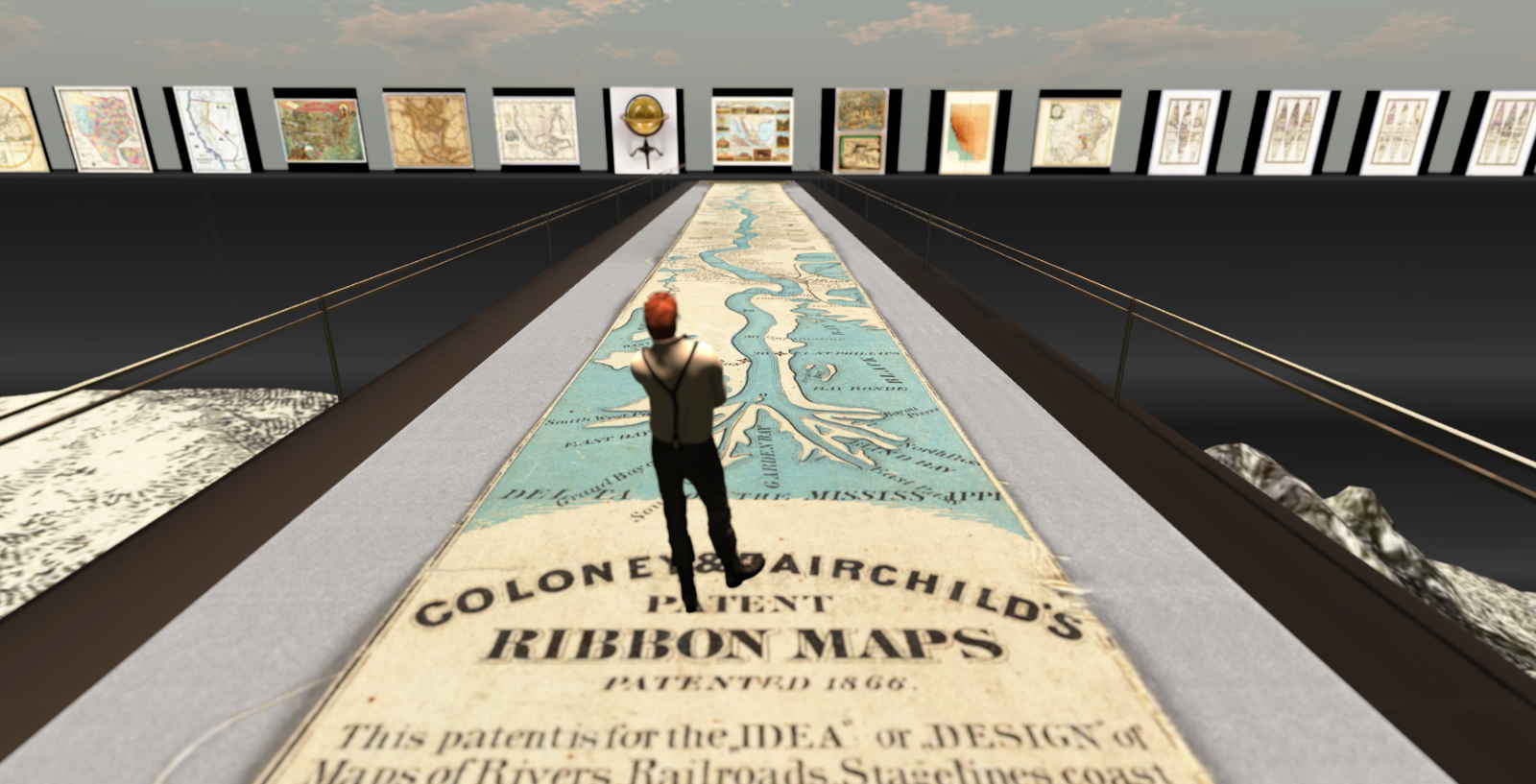 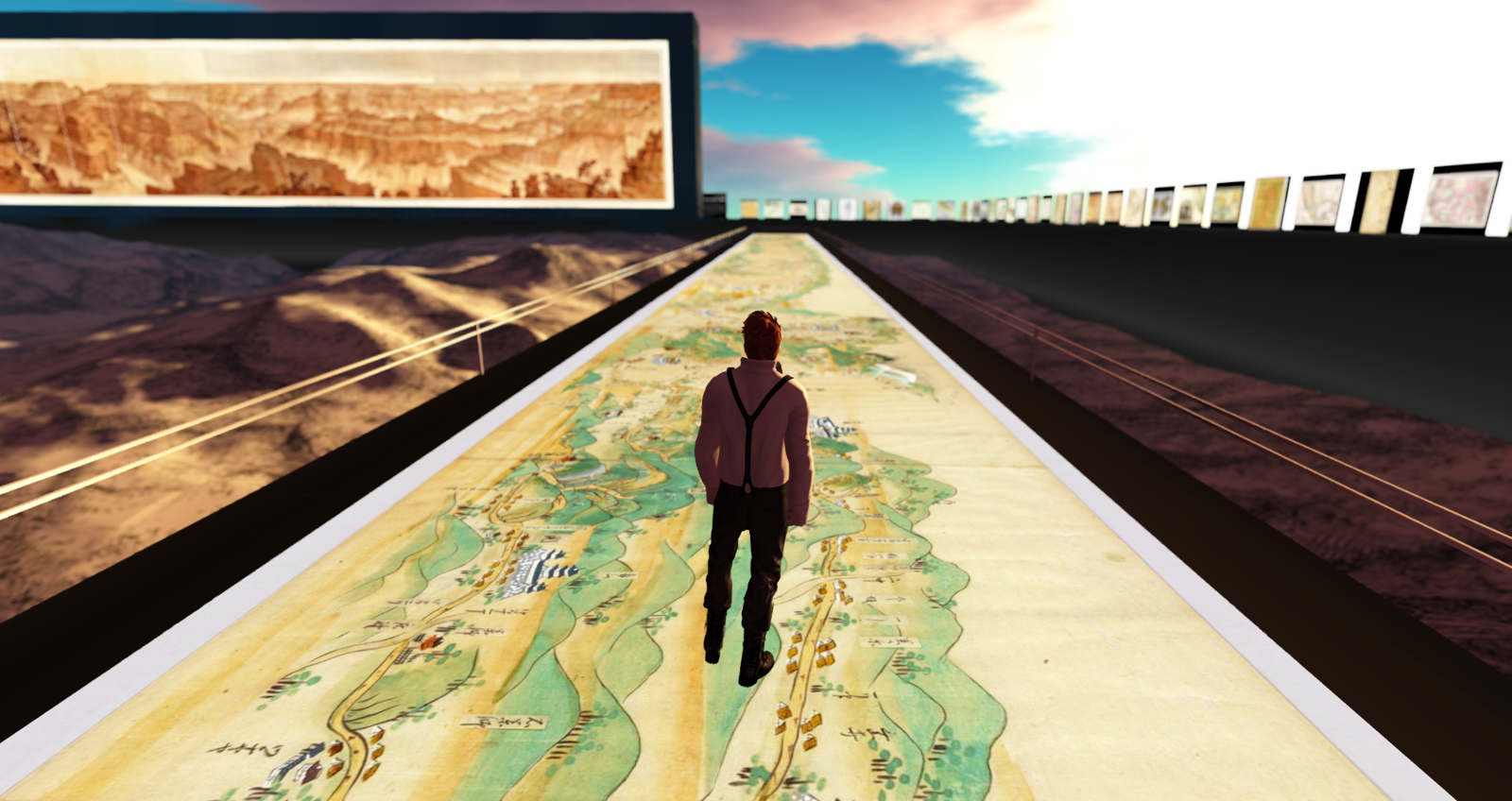 Bridge with a map of the Tokaido Road in Japan

With the evolution of SL since 2008, both a map walk and a map tower were added to the sim. They significantly increased the number of maps that can be assessed from Second Life. By clicking on each item on the walk or in the tower, the visitor is directed to a webpage with full information about the correspondent map. Working as ways to reach the walk or to just contemplate the sims, there were built two bridges that display two scroll maps: one of the Tokaido Road in Japan, made in 1687 by Mino Kamaki, and one of the Mississippi River, published in 1866 by Coloney, Fairchild & Co.

The David Rumsey Maps sims explore the potential of Second Life for delivering a different experience to its visitors and increasing the ways of accessing certain items beyond the traditional interactions of the atomic world. They are an example, too, of how SL can be used in the fields of education and museology. Finally, they also promote a more familiar link between maps and people by means of a central shop that offers free virtual globes and hanging maps to the visitors who go to the sims. I have collected all the freebies and they are fascinating to me.

4 thoughts on “Accessing historical maps in a unique way”