ATTENTION: UPDATE on the party at the end of the text.

The Far Away, a countryside landscape by AM Radio

The invitation, open to the whole Second Life community, to a celebration called Radio Days, on Saturday, November 21, at The Far Away, brings a good opportunity for me to share some thoughts on sims (or parts of sims) as art works. The event celebrates artist AM Radio and, of course, The Far Away, his very first landscape installation in the virtual world maintained by Linden Lab. It has been organized by Ziki Questi and Kinn and will feature Gabrielle Riel, of Radio Riel, providing music. AM Radio himself, who hasn’t been a regular to SL for a while, may join the party, if he’s not on a trip. It is informed that 1930s attire is desired but not mandatory. The party goes from 1 PM to 3 PM, SL Time. 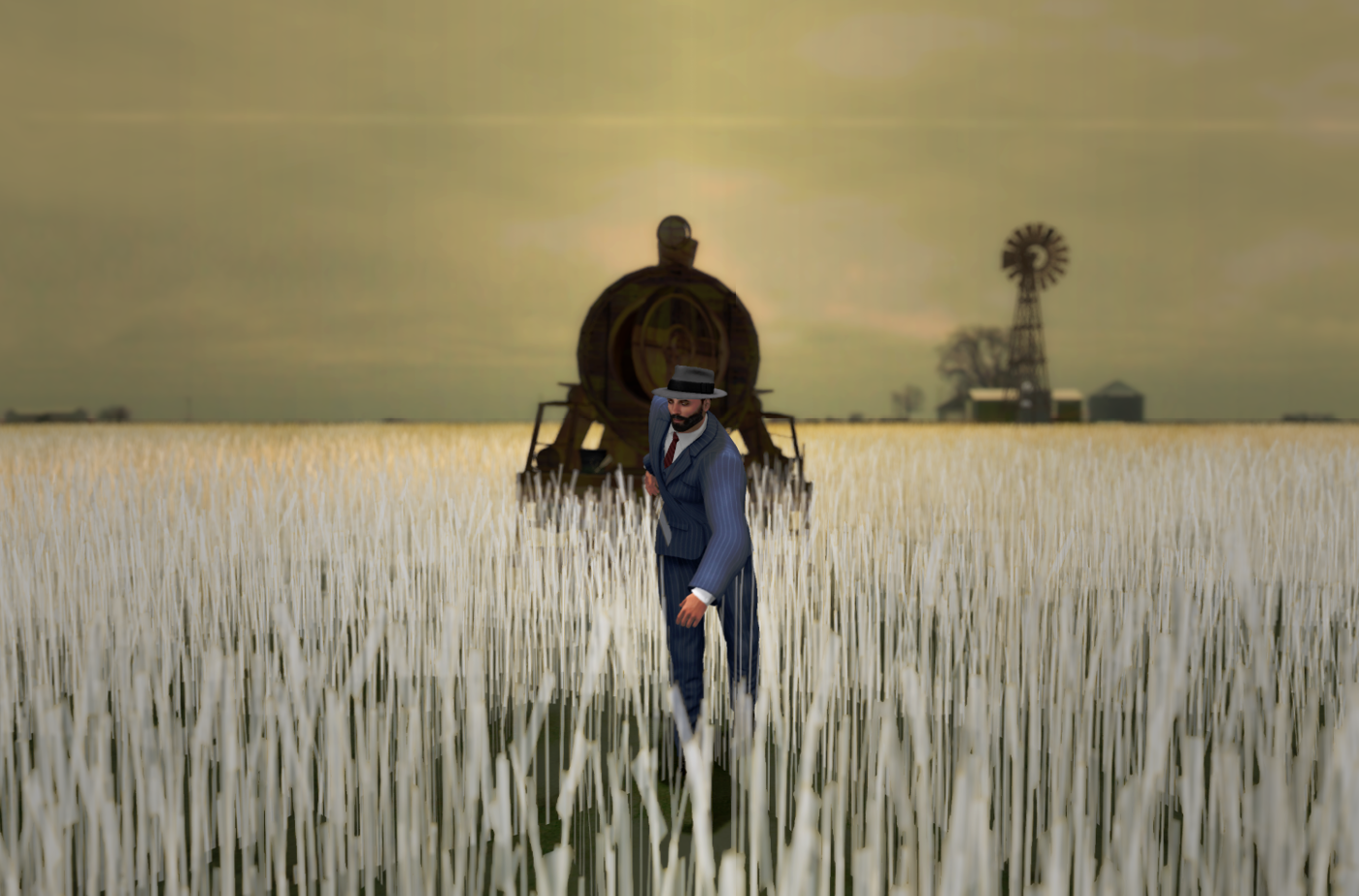 Ricco trying to escape the train

The Far Away is probably the only creation by AM Radio that can still be experienced in SL. All the others are gone – and The Far Away itself would have disappeared, too, if Ziki Questi hadn’t reached a deal to preserve it on the grid. It was built in 2007 and consists of a countryside landscape with certain displaced elements (a china cabinet left outdoors, a microscope that doesn’t seem to belong there and some other items) and a few pose and animation points which, alongside a couple of clickable objects, allow visitors to interact further with the art work. 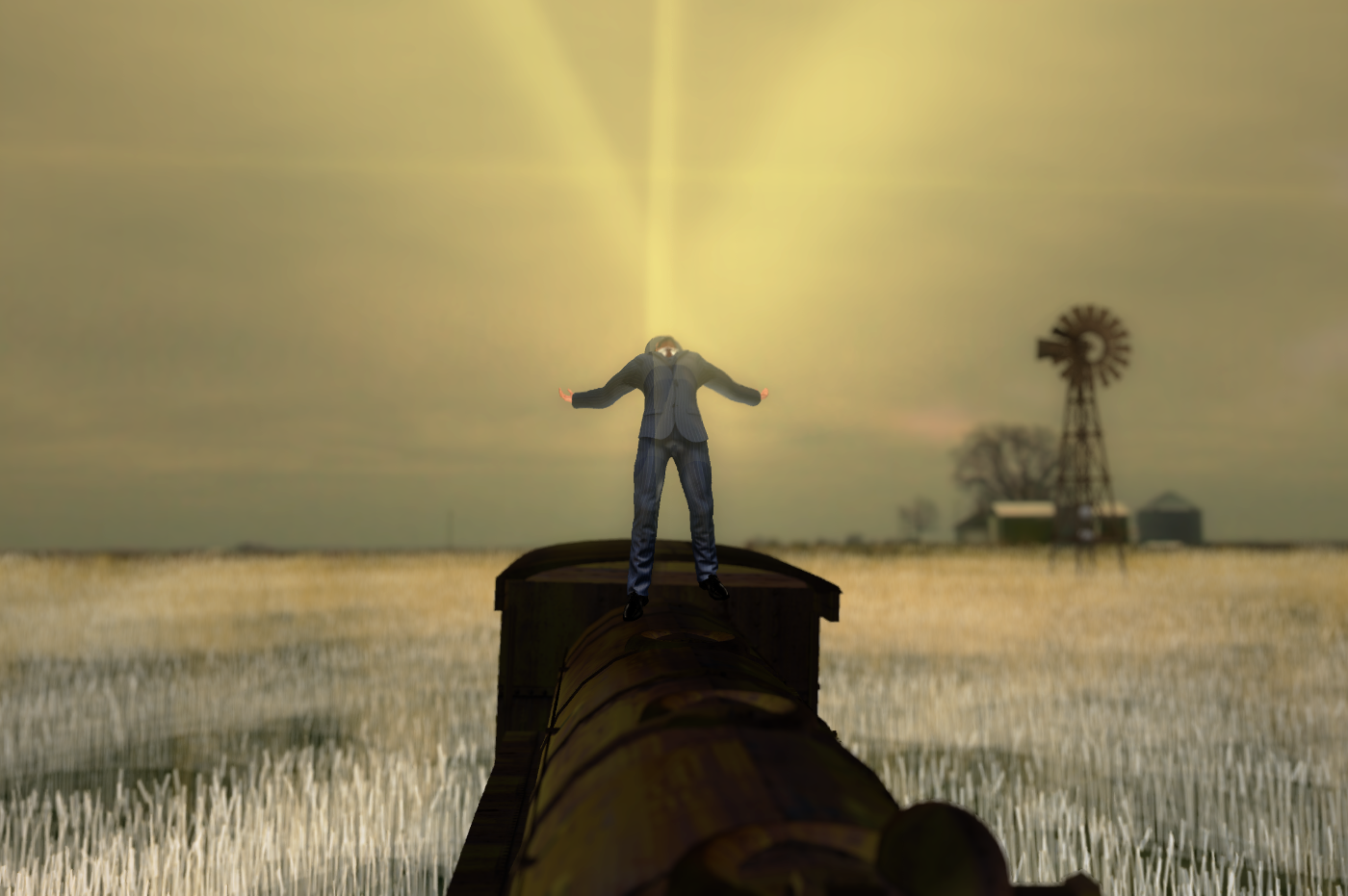 As most installations that AM Radio would build after it, The Far Away is somewhat simple, displaying just a few elements instead of a plethora of objects and effects. Yet, it may be felt by many as a powerful experience – and that’s what made AM Radio’s name as an artist in Second Life (in the atomic world, Jeff Berg, who’s behind the virtual avatar, develops artistic creations, too, as one can see on his Tumblr page). Following the repercussion of his first art work in SL, he came up with several other landscapes, housed at the IDIA Laboratories sim, which vanished from the grid in 2011. The trajectory of Berg and Radio is told on a fascinating article by Wagner James Au for Polygon, written in 2014. 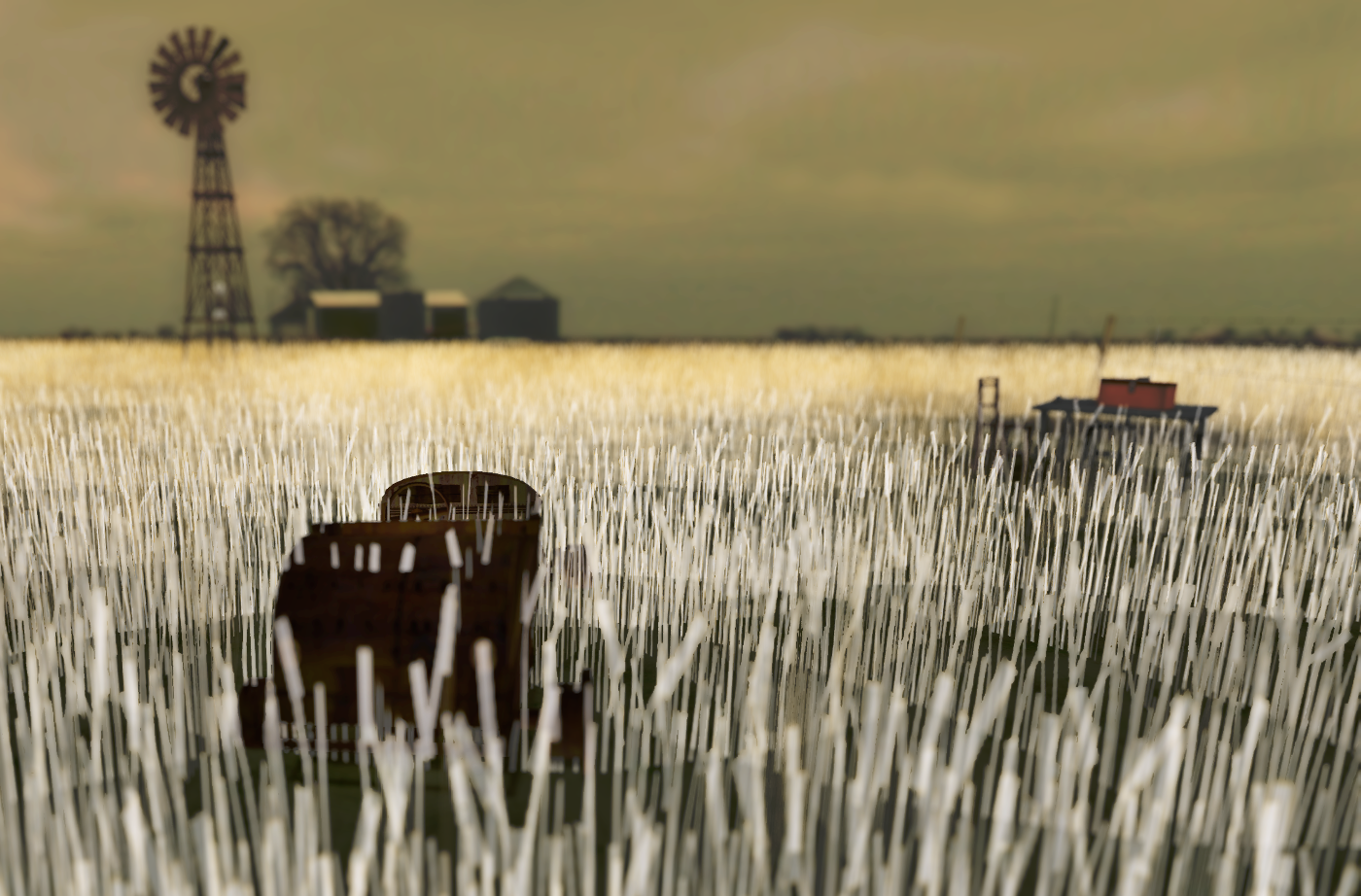 A wrecked car at The Far Away

AM Radio’s success helped disseminate an artistic approach to Second Life which I’ll call here “the sim (or part of a sim) as an art work”. Respecting, of course, each artist’s individual expression, that’s the same approach shared by Bryn Oh, Rose Borchovski (at least to some extent) and a number of projects that one can see at The Linden Endowment for the Arts’ (or LEA’s) regions. And it’s very different in, let’s say, nature from what one would find by visiting The Crooked House or seeing Seifert Surface’s sculptures. They all explore the potential of SL in one way or another, but not all of them try to convert a parcel or an entire sim into an artistic experience. 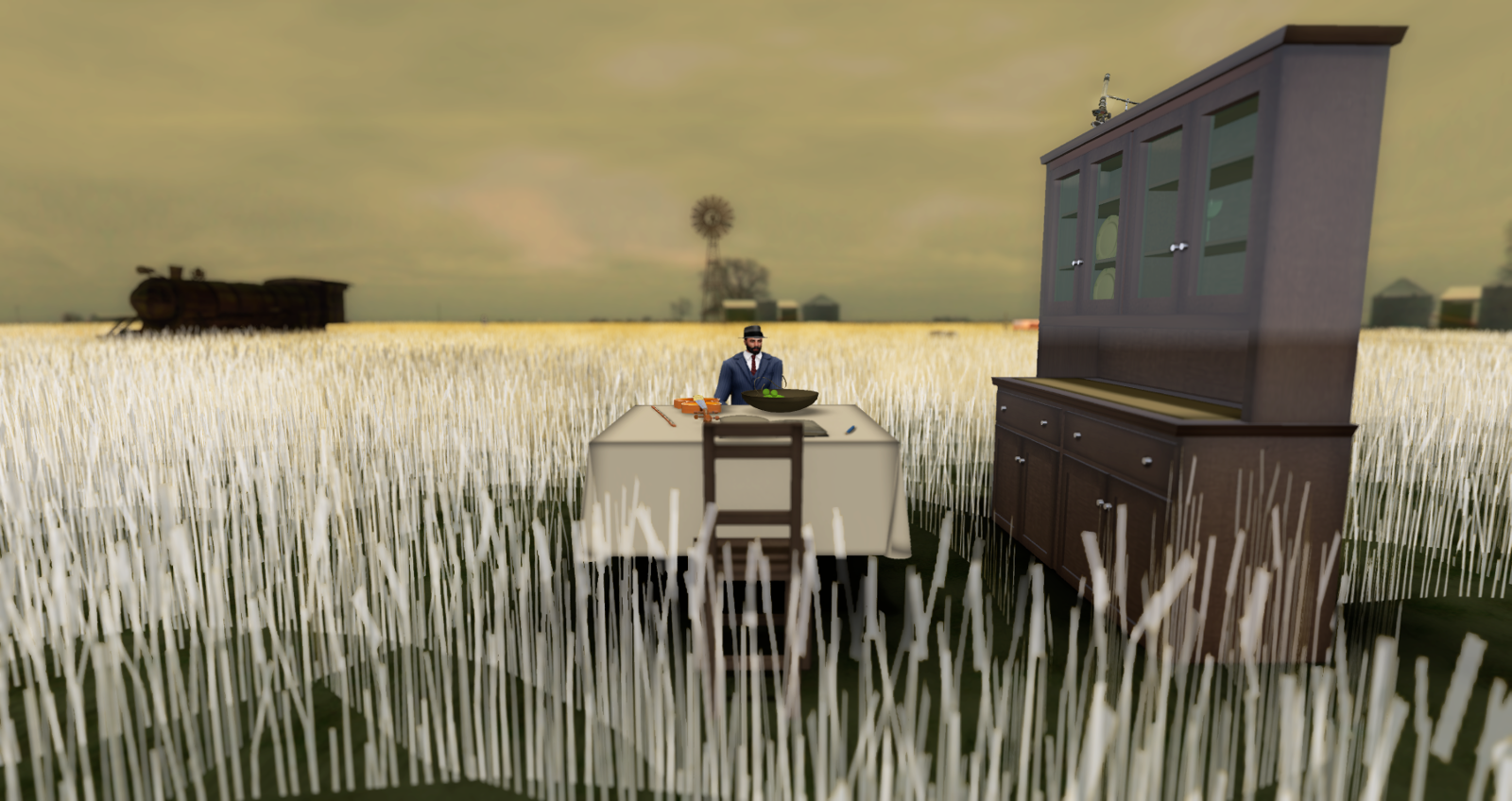 Ricco at a table, at AM Radio’s installation

Of course, this is a schematic division and (virtual) reality is a bit more complex than that. AM Radio himself had a Death of Marat installation (which can be seen on this Flickr group) that was not a sim as an art work. On the other hand, sims made as art works can incorporate sculptures such as Seifert Surface’s ones or rely on immersive video structures such as Mediamorphosis, by Djehuti-Anpu (display name) or Thoth Jantzen (user name). 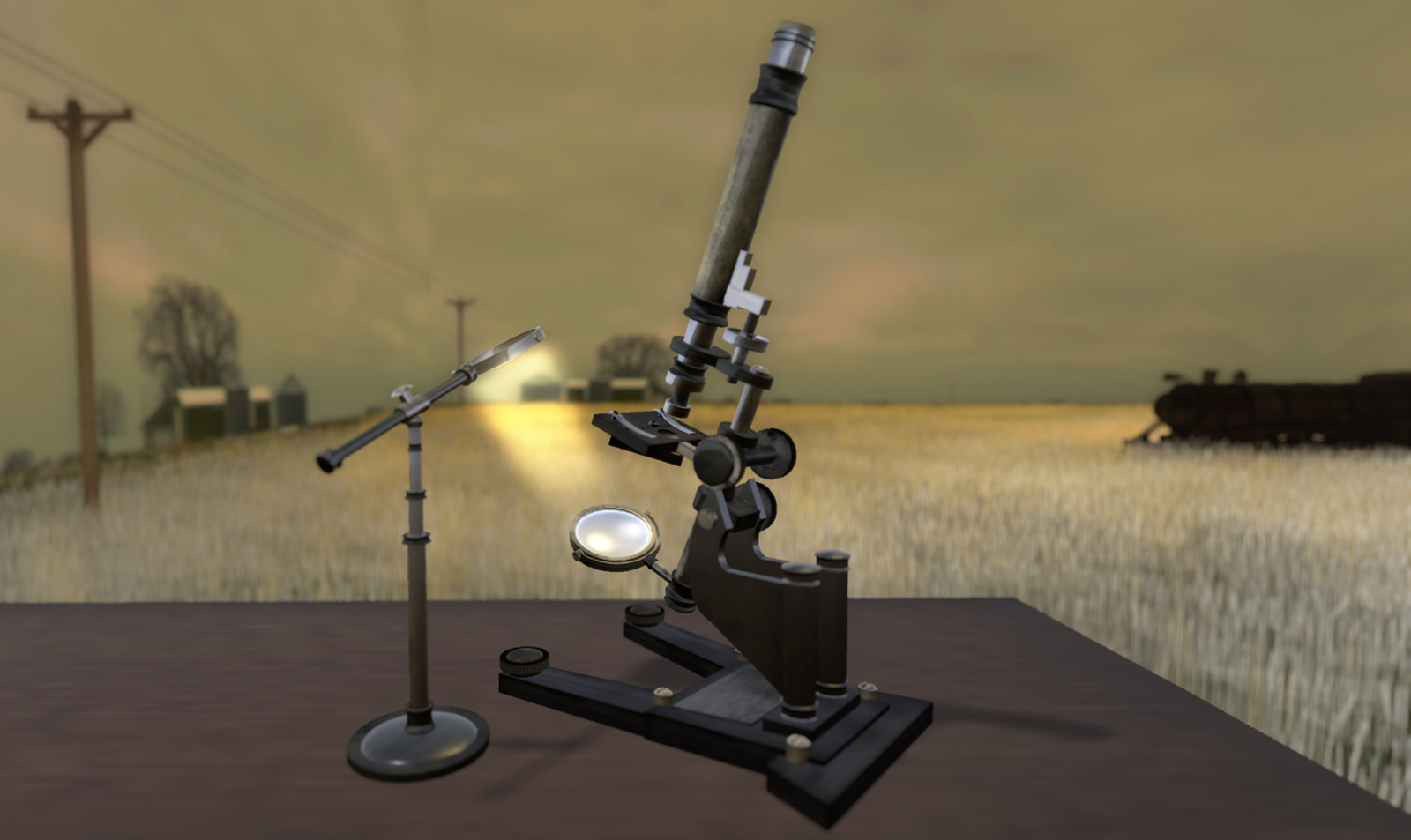 What is a microscope doing there?

Still, it’s noticeable that some art works in Second Life consist in landscaping and building a 3D environment (and not only a 3D object). In many cases, that effort results in a surreal landscape, but I’d say a certain expressionism and other artistic trends can be found as well. Whatever form the different individual installations may assume, they all tend to lead to a powerful experience of surroundness: our avatars are thrown into a field, a town, a desert, an impossible topography, a forest – which, itself, is the art piece that we went seeing and by which we are engulfed. 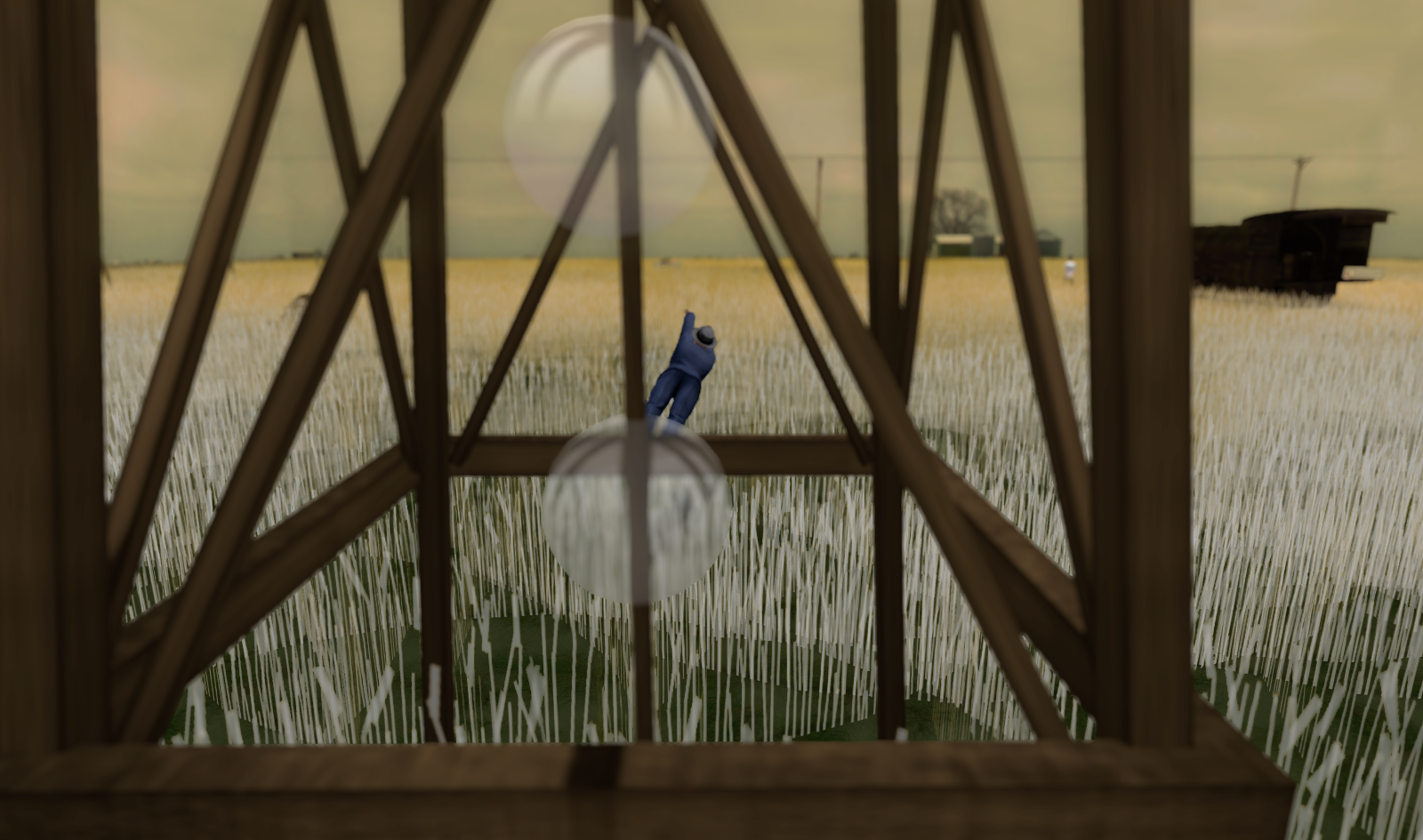 In the case of The Far Away, the environment is so dense that the vast empty areas contained in it do not feel empty at all. As my husband Randy says, there’s no need to fill the whole space, because, there, space itself is part of the expression.

All that said, I’ll do my best to join the Radio Days celebration. I miss AM Radio’s talent in SL and I really like The Far Away. Maybe you like it, too? Maybe I’ll see you there? 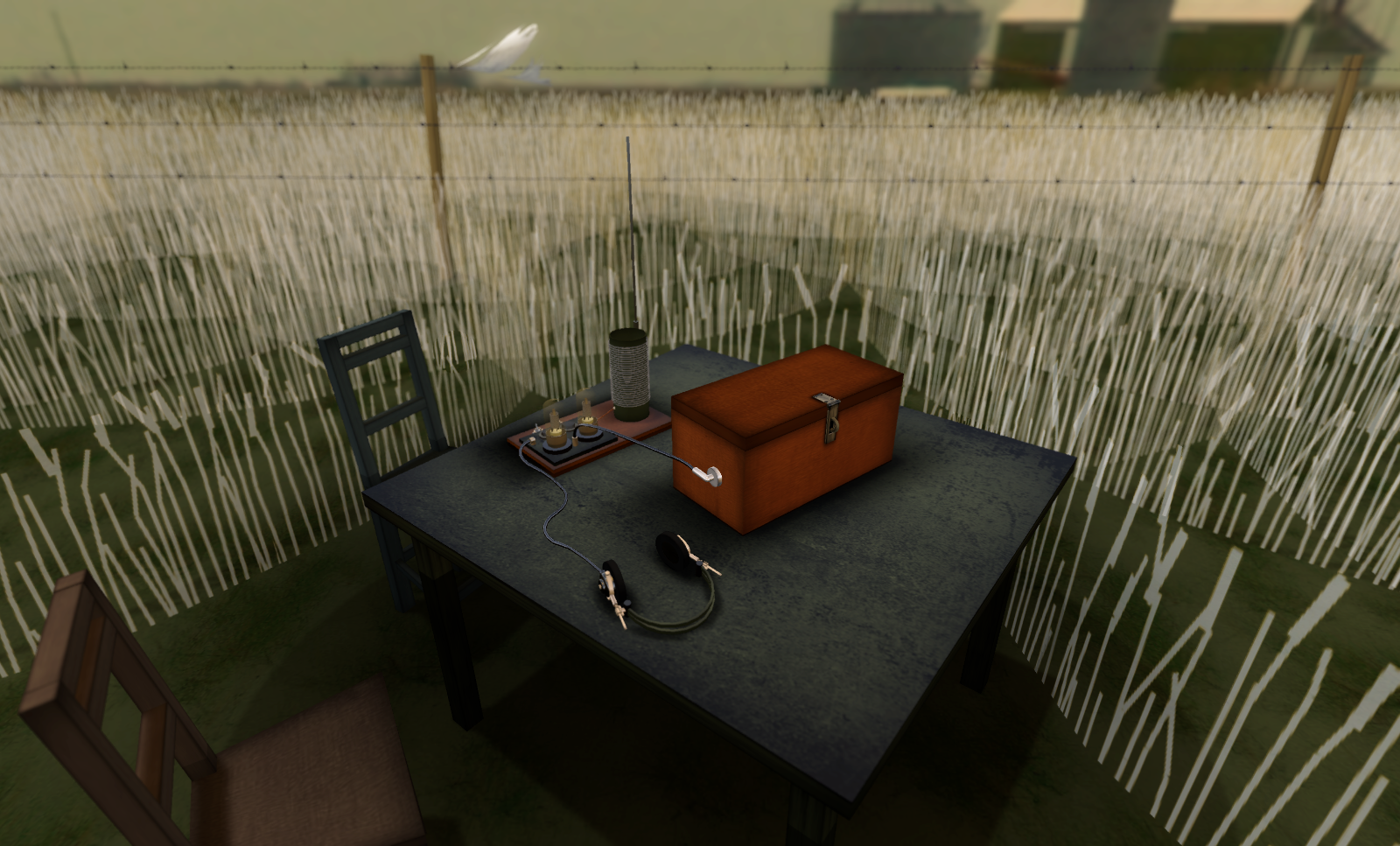 Table at The Far Away

UPDATE: AM Radio did make it to the party and celebrated Radio Days with the crowd at The Far Away, as you can see on the following pics. 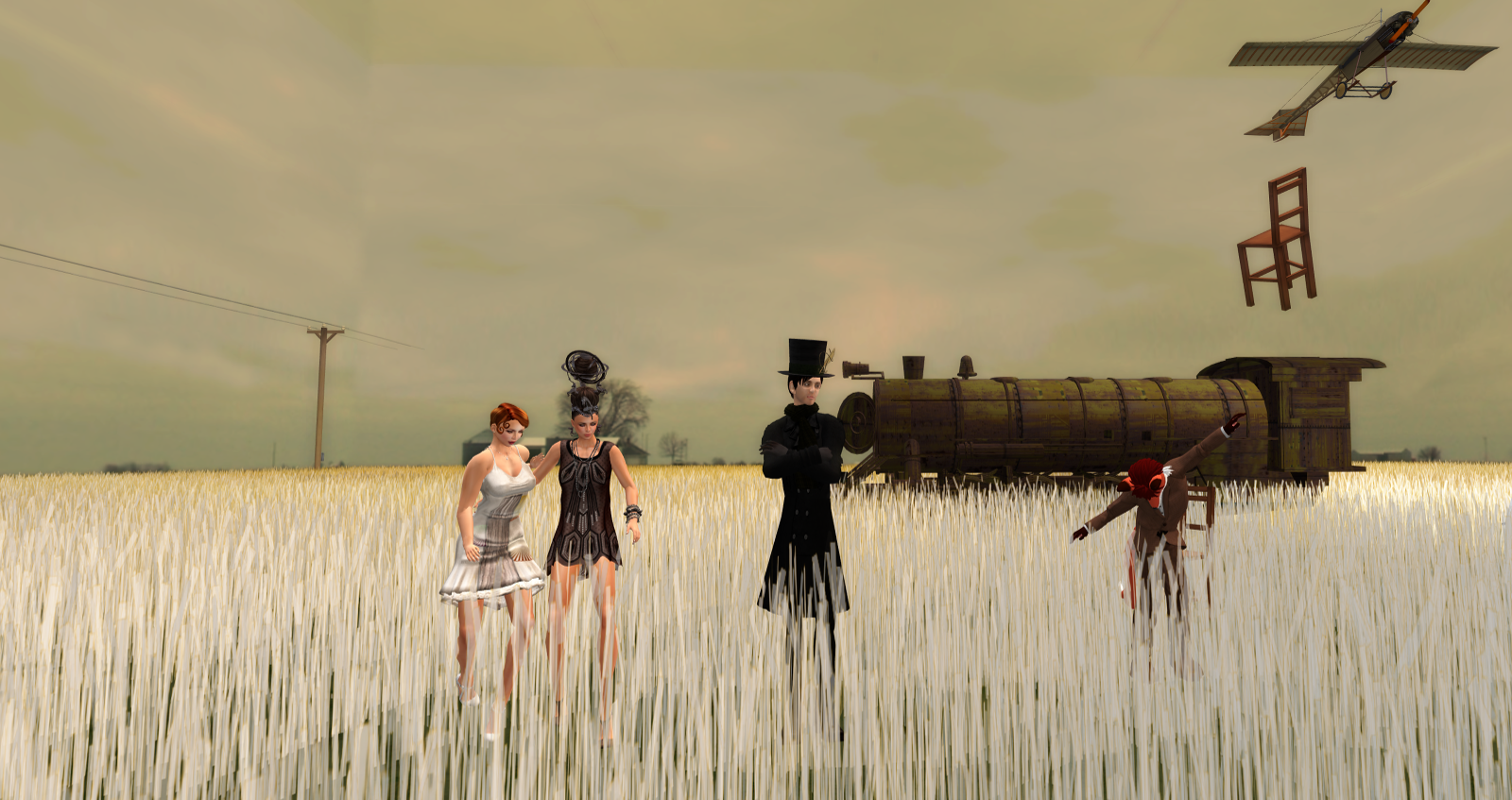 Kinn, Ziki Questi, AM Radio and Erik Mondrian at the party

Eupalinos Ugajin (foreground, showing an amazing avatar as always), AM Radio (on the train) and the crowd celebrating Radio Days

5 thoughts on “Will we meet far away? (or sims as art works)”