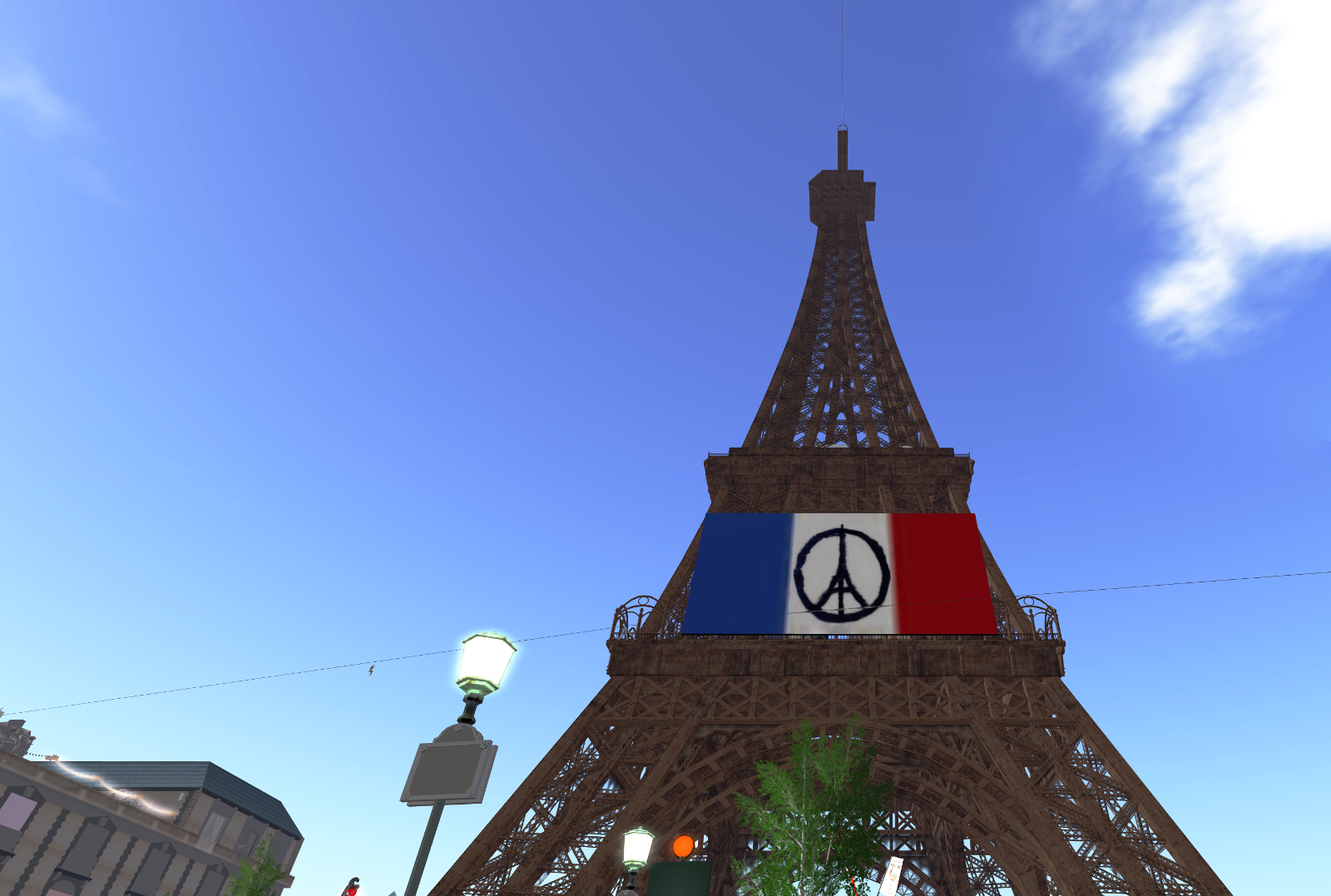 Following the terrorist attacks of November 13th in Paris, I visited Paris 1900 and its Eiffel Tower in Second Life a few times and found a net of solidarity there. People held plaques and wore pins to show their support to the city and the victims.

I like to think of Second Life’s user base as a resource of solidarity. SL residents contribute to fight against cancer and to stand against hate, they try to help when a natural disaster happens (as we’ve seen in the cases of earthquakes in Japan and Haiti), they show their support to victims of tragedies.

It was not different in Paris 1900. There was little talk, but one could find many signs of solidarity. As my husband Randy observed, most people were silently communing instead of making noise. And I saw SL users from different parts of the world – some from France, but also many from other countries.

Of course, at some point the usual griefers had to appear. Someone teleported in to say “send refugees back” and other sentences in Arab that I chose not to reproduce here. The person was banned for provocation and racial hate. Later, another avatar, which was just 2 days old, so typical for trolls, went to the Eiffel Tower sim with a gun (and it’s worth noticing, especially in this context, that, when one arrives at Paris 1900, they get a notice saying that no guns and attacks are allowed). 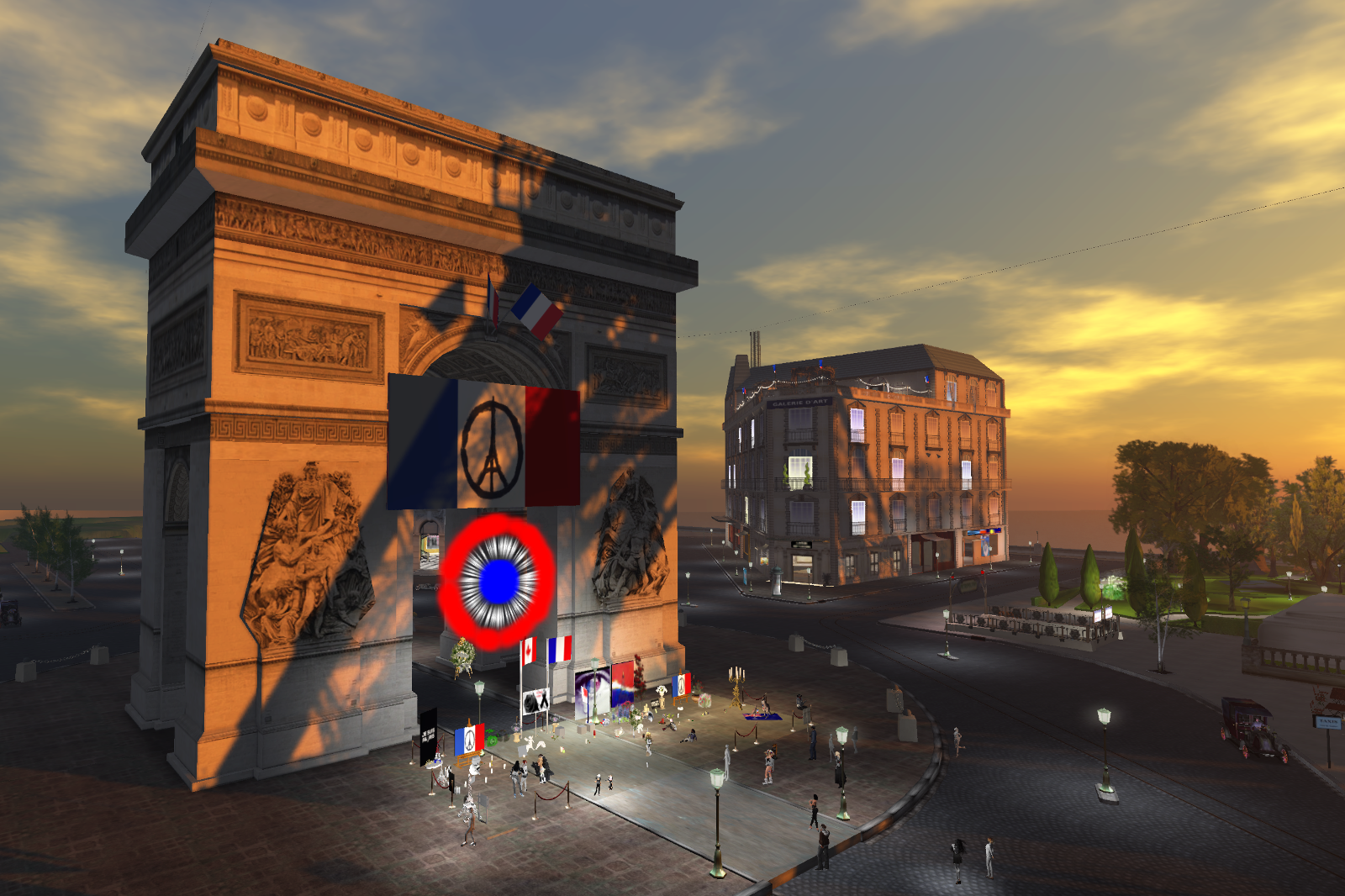 A rezzing area was set at the Arc de Triomphe

Apart from that, though, people were generally respectful. An area for rezzing items was set at the Arc de Triomphe and there were flowers, candles, gift givers, flags and many other objects there. “Je suis Paris” was the tag for a number of avatars.

On SL’s Marketplace, one can find, too, free items to show support. If you’d like to check some, all you have to do is to search for “Paris” and sort the results by “age: newest first”. Narrowing the results by price (“L$0 – L$10”) also helps.

I am sorry for what happened in the real life Paris – and sorry for many reasons. But I also feel proud to be part of a community, the SL residents one, that does not hesitate to show support when needed. Of course, trolls appear here and there. But even when they show up, the community as a whole seems to reject them and try not to feed their behavior. Nothing justifies terror and terror is no subject for trolling about. May there be peace – for Paris, for the whole world, for each one of us. 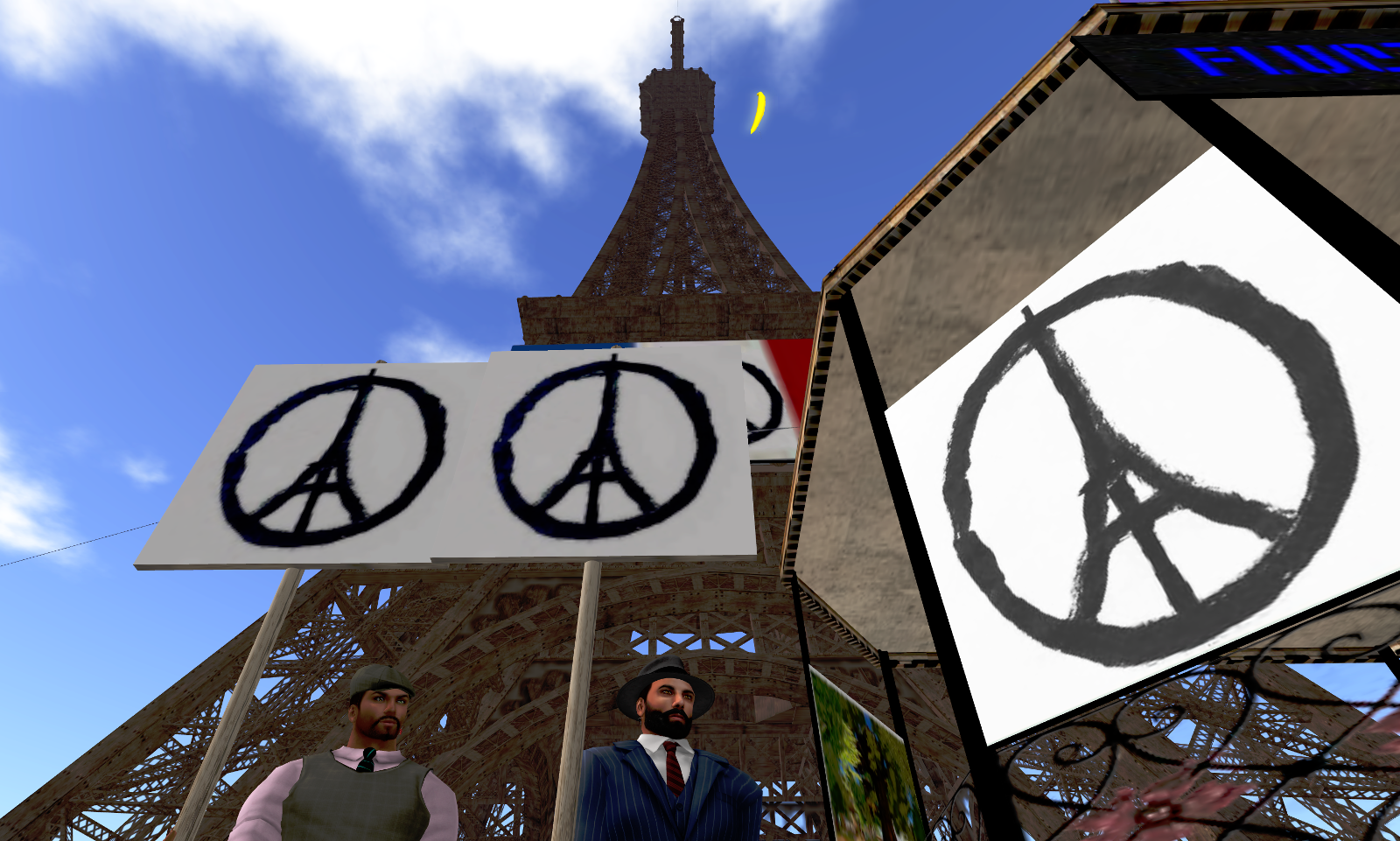 One thought on “Standing for Paris in Second Life”