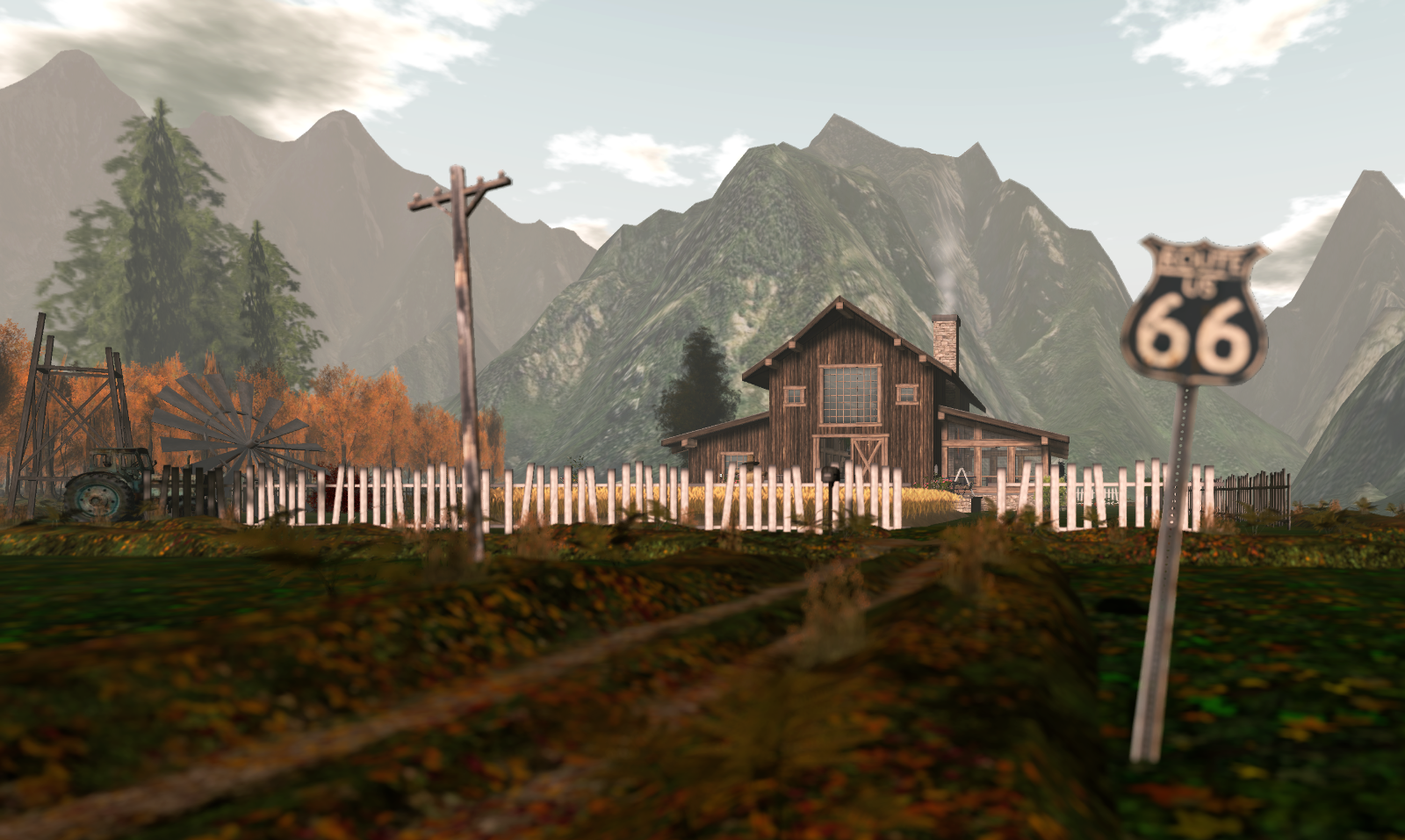 In Second Life, many of us build homes. We have houses, apartments or skyboxes and fill them with stuff that we like. We decorate, we landscape, we create our own safe havens. We try to mirror ourselves in them, we hang photos and artwork on the walls, we distribute our personal memorabilia through different rooms, we transform those places into our own territories.

Together with some real life events, working on a new place to settle down is what kept me away from blogging all this time. The limited time I had to spend online lately was almost entirely dedicated to the task of moving to a new sim and decorating the new parcel I share with my husband Randy. And that task made me think of why many of us in SL buy or rent parcels and houses and such, and what is it that we call home in the virtual world. 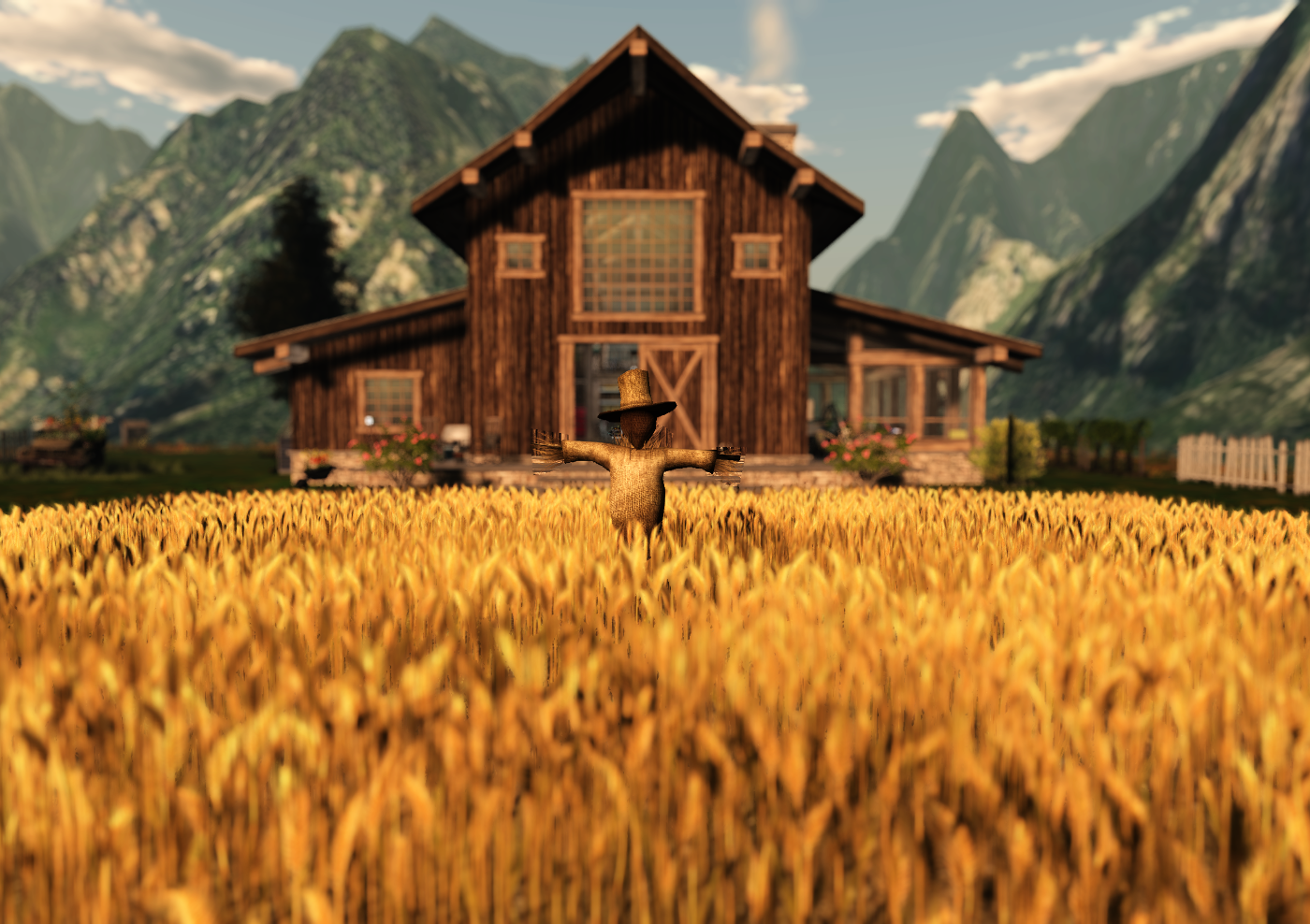 A broken windpump at Randy and Ricco’s farm

Avatars do not depend on a physical shelter. In the virtual world, we need no walled place to protect us against the weather, to work as a safe surround while we sleep or to stock food and other provisions. Also, we need no gardens or fields for rural activities. Our virtual beings are not Tamagotchis and don’t have to be fed or put in bed. Still, a great number of SL residents feel compelled at some point to have a home (and to a great extent that’s what keeps the land market in Second Life running). 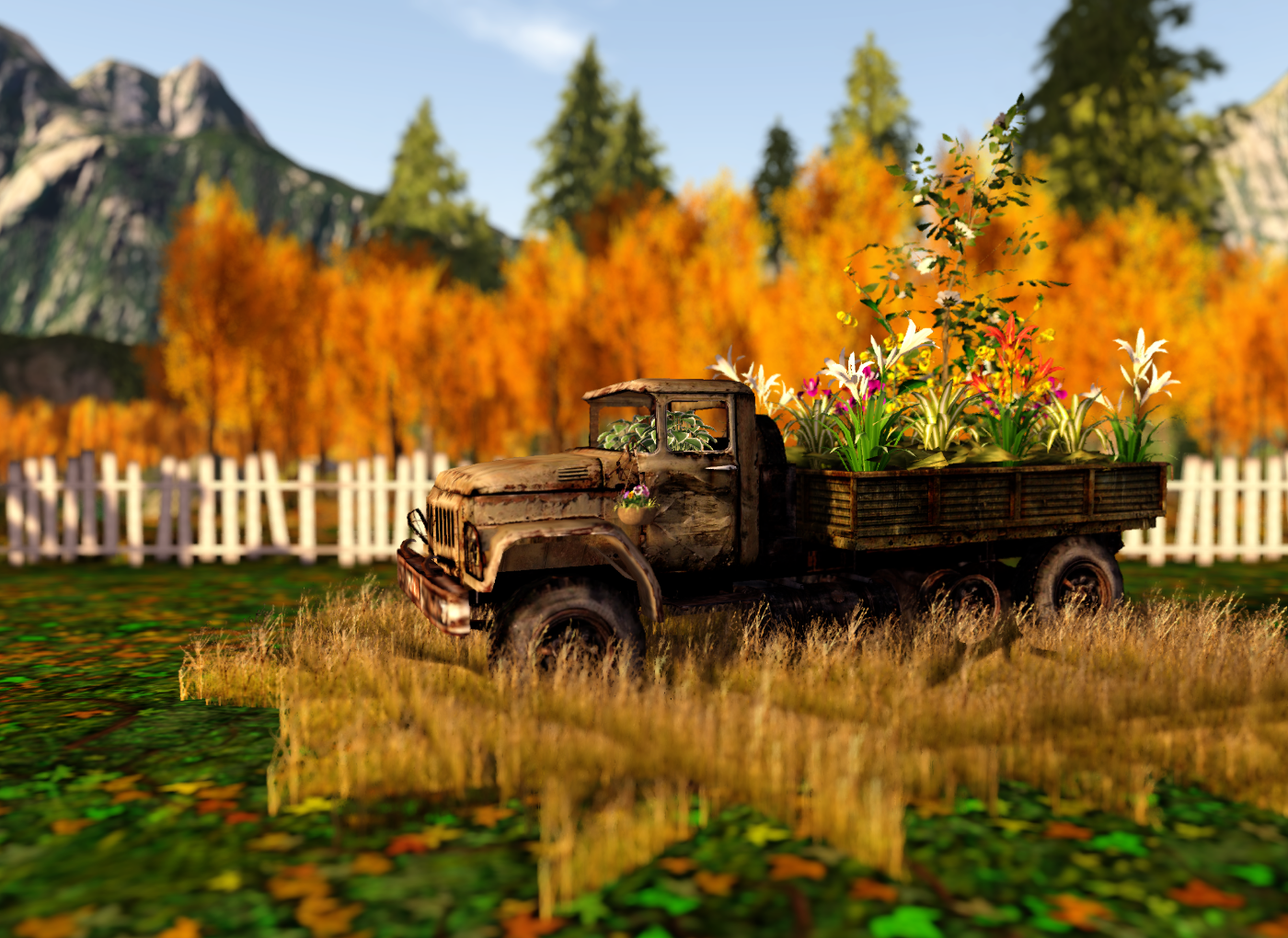 Randy’s garden in the autumn

There are practical reasons for that, of course. One can use their own land to open recently acquired virtual items that may come boxed, for instance. On their parcel, one can rez vehicles, toys or the gadgets that they keep in their inventory. For all that, though, a sandbox could solve the problem. You want a place for having sex with your partner? There are dozens of options in SL as well – even for those who want some privacy. For sure, certain kinds of commercial or community activities, such as the ones developed by photo studios, clubs, meeting venues and some stores, require a sim or part of a sim, but that’s not the same as having a home.

I’d risk to say that our homes in SL are our narrative references. Because it’s not physically needed, a home in a virtual world like that is, more evidently than anywhere in the atomic world, a symbolic space made to work as a node towards which the network of storylines that form one’s personal history converge and from which they depart again to develop themselves into what we call life. In other words, that’s our base, from there we leave to explore different environments and meet new people and to there we go back at the end of the day with our most remarkable memories and our closest friends. 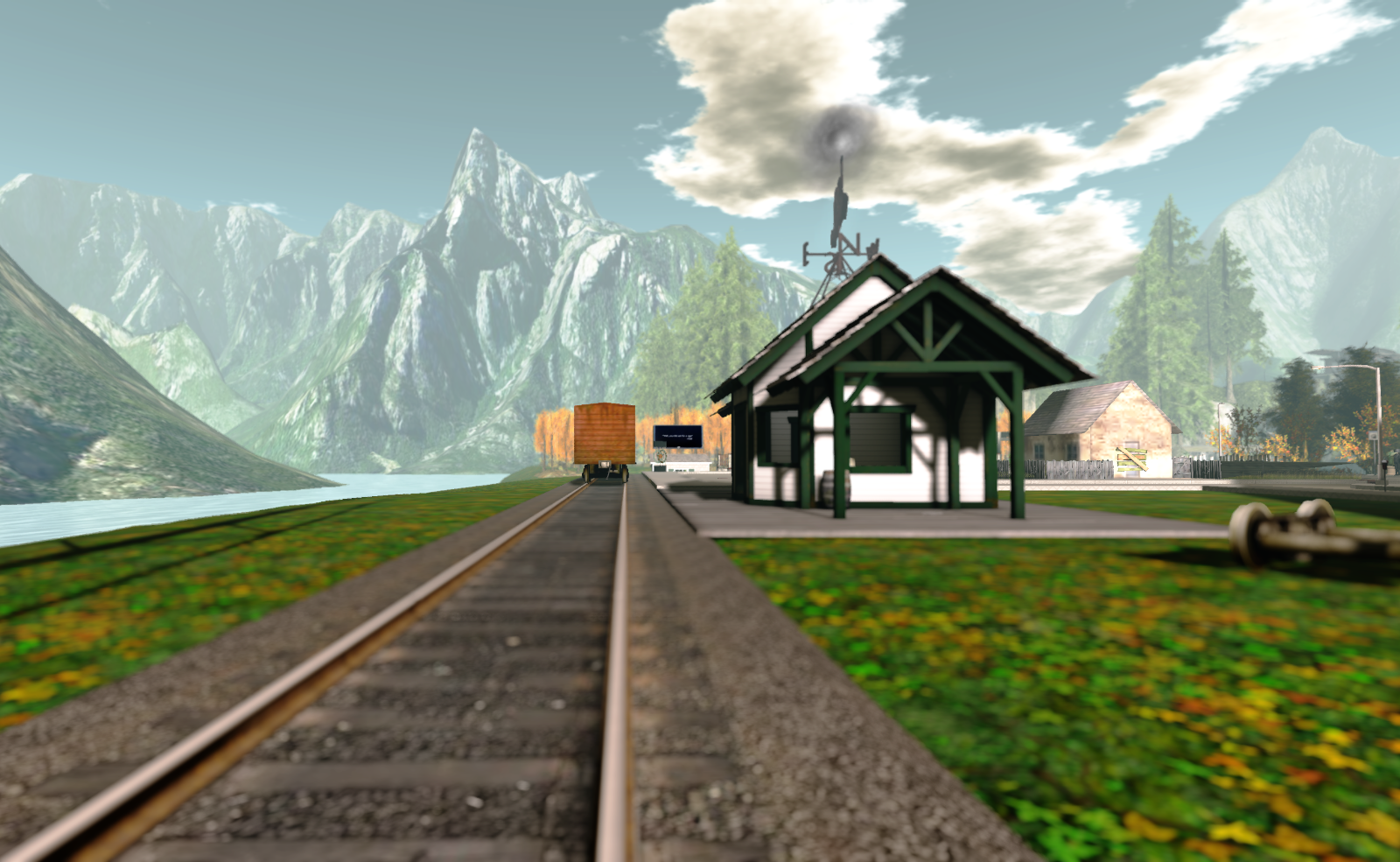 The train station at the town of Brazen Fair Ends 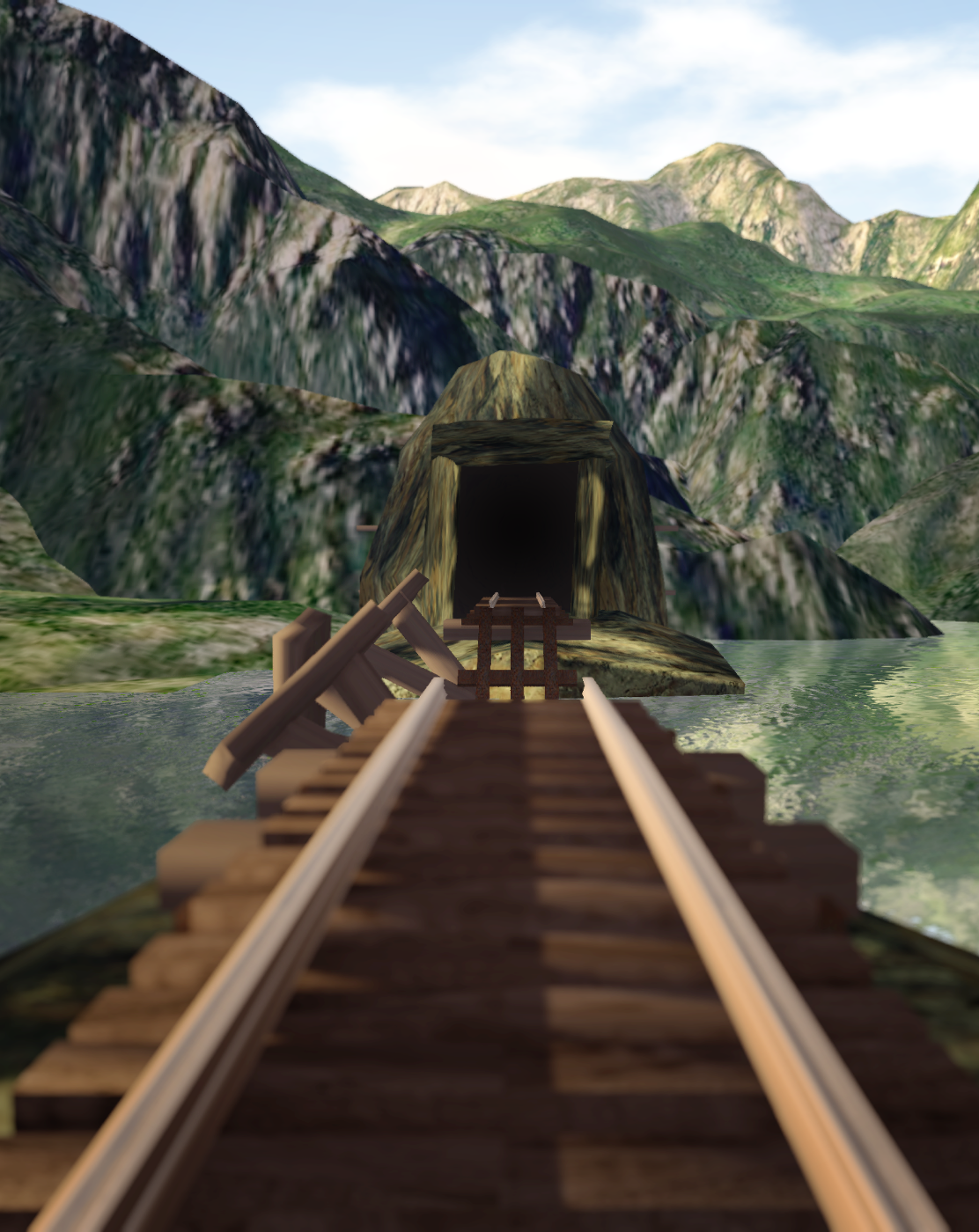 The bridge for the train at Brazen Fair Ends is broken

Such a place has to be built as a space that we can recognize and where we can feel comfortable. It has to be familiar and welcoming. That’s why we decorate them, we plan their landscapes, we try to express ourselves in them. Thus, it shouldn’t be a surprise that, in Second Life, “when given total creative license, most of the houses just looked like ones in Malibu” (as Philip Rosedale observed back in 2012, according to Sarah Lacy). For sure we could come up with unforeseen buildings, revolutionary structures placed on Earth, on foreign planets or deep in space – and some of us do. But many choose to simply give path to idealized realities to which they are already somewhat familiar with. Even if one does not live in Malibu, they may have dreamt with it in their atomic existence for a while and then try to reproduce that dream in SL – a dream that is part of their desires, of their narratives, of how one thinks of themselves. 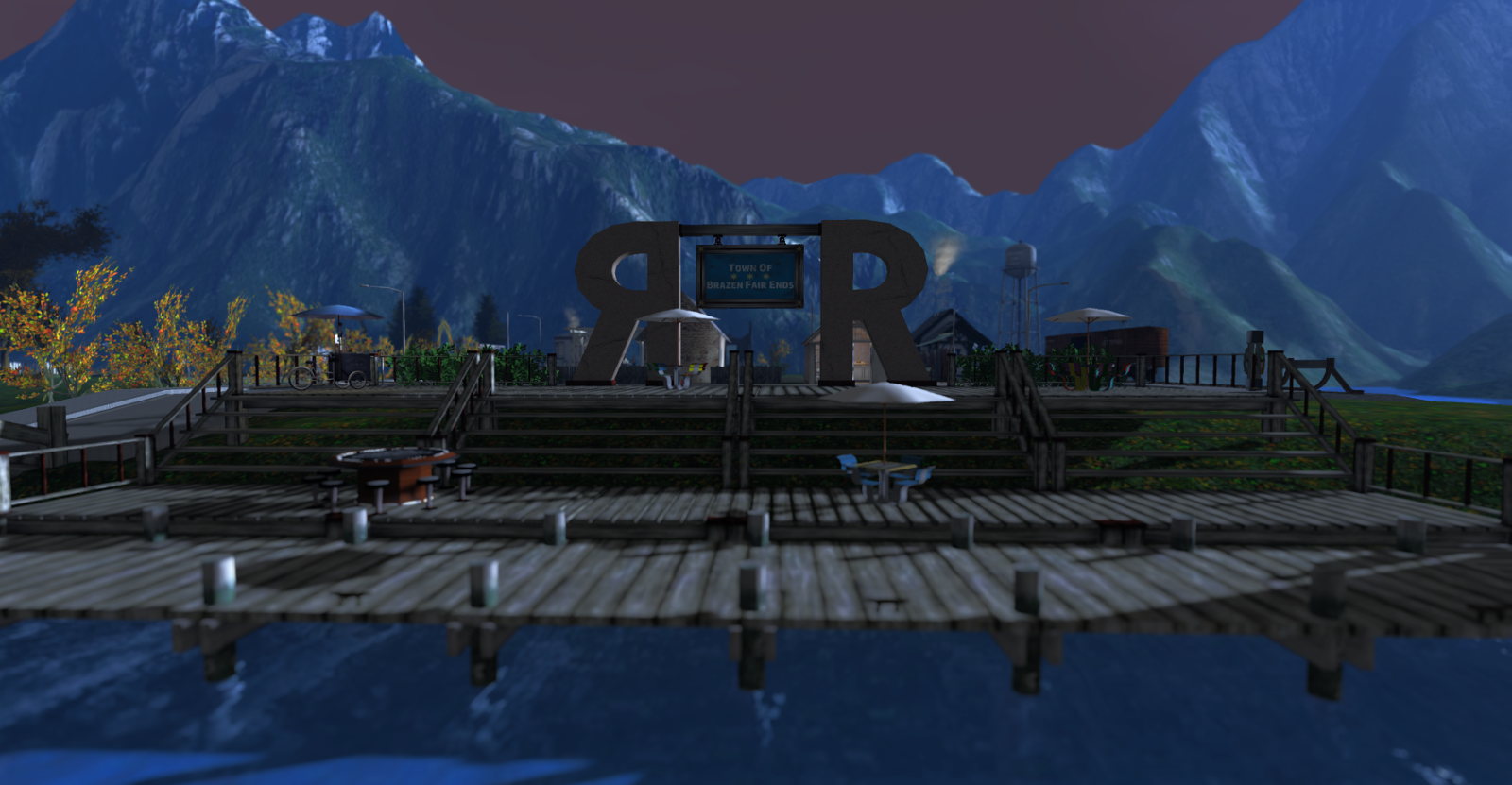 It doesn’t mean that we cannot experiment. Certainly, the visionary ones may build their homes to reflect their visions – and they will still recognize themselves there. Others may also keep redecorating, but the place is still going to be what they choose it to be – it’s their own redecoration, not someone else’s. Or, as I did, one may imagine how life would be in a different environment from the one that they tend to prefer in the atomic world – simply because it’s safer and easier to navigate between diverse landscapes in SL. I am an urban creature, but in Second Life I can try a rural home with Randy, for, if I get tired at some point, I can easily teleport elsewhere and have a taste of something else without having to drive for hours to arrive there. 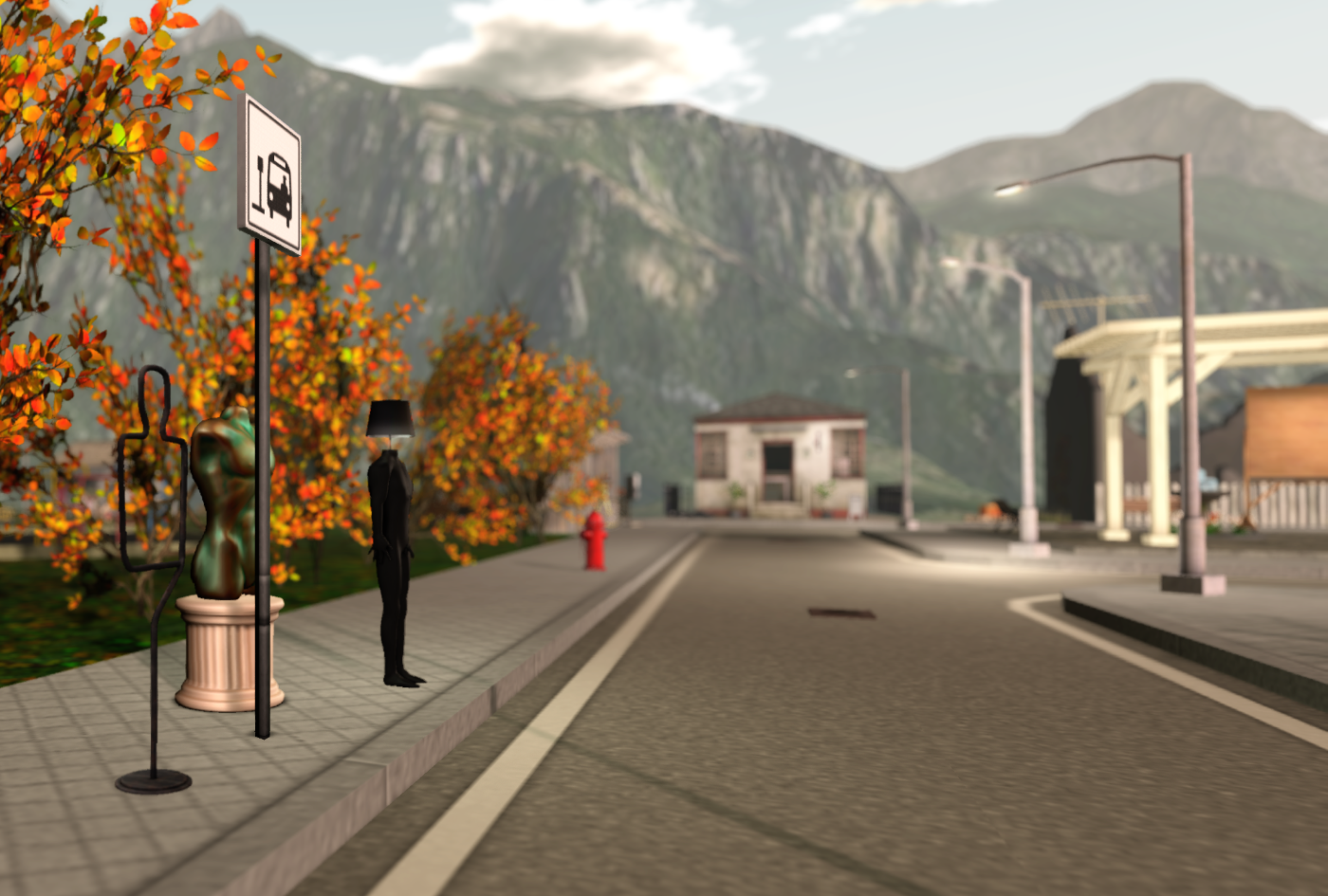 The town of Brazen Fair Ends: weird buddies waiting for the bus

Together, then, Randy and I created Brazen Fair Ends, a small town which sometimes seems alive (the bakery is always open, for instance) and sometimes feels abandoned (with ruined houses and a train that obviously goes nowhere anymore). We don’t really live in the town, but in a small farm located nearby, with a wheat field right before our house. Between the farm-house and the town, there’s a pond and a playground. Luckily, our amazing neighbors went rural too, allowing us to keep the same theme in the whole sim. 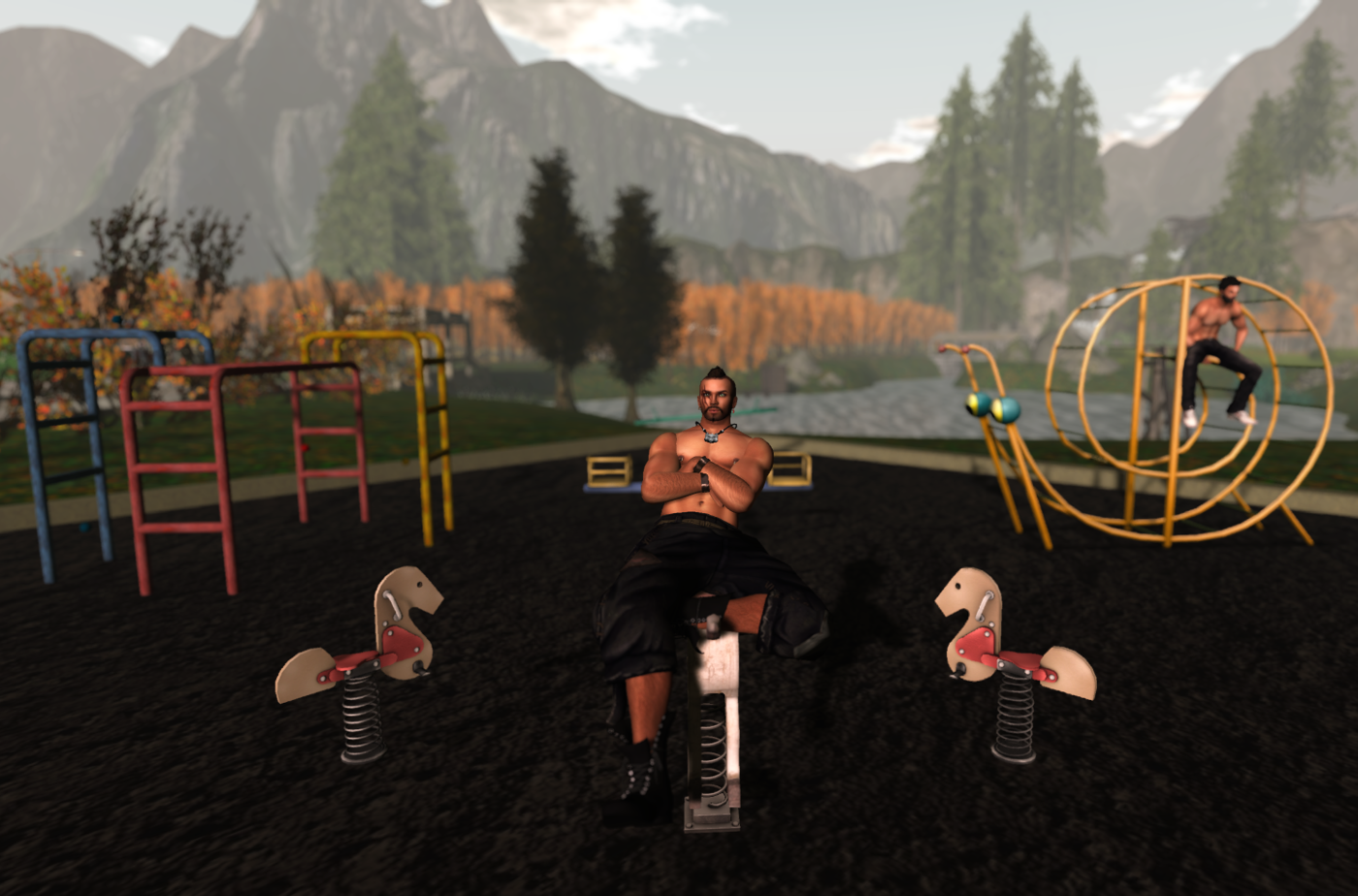 Randy and Ricco at the playground 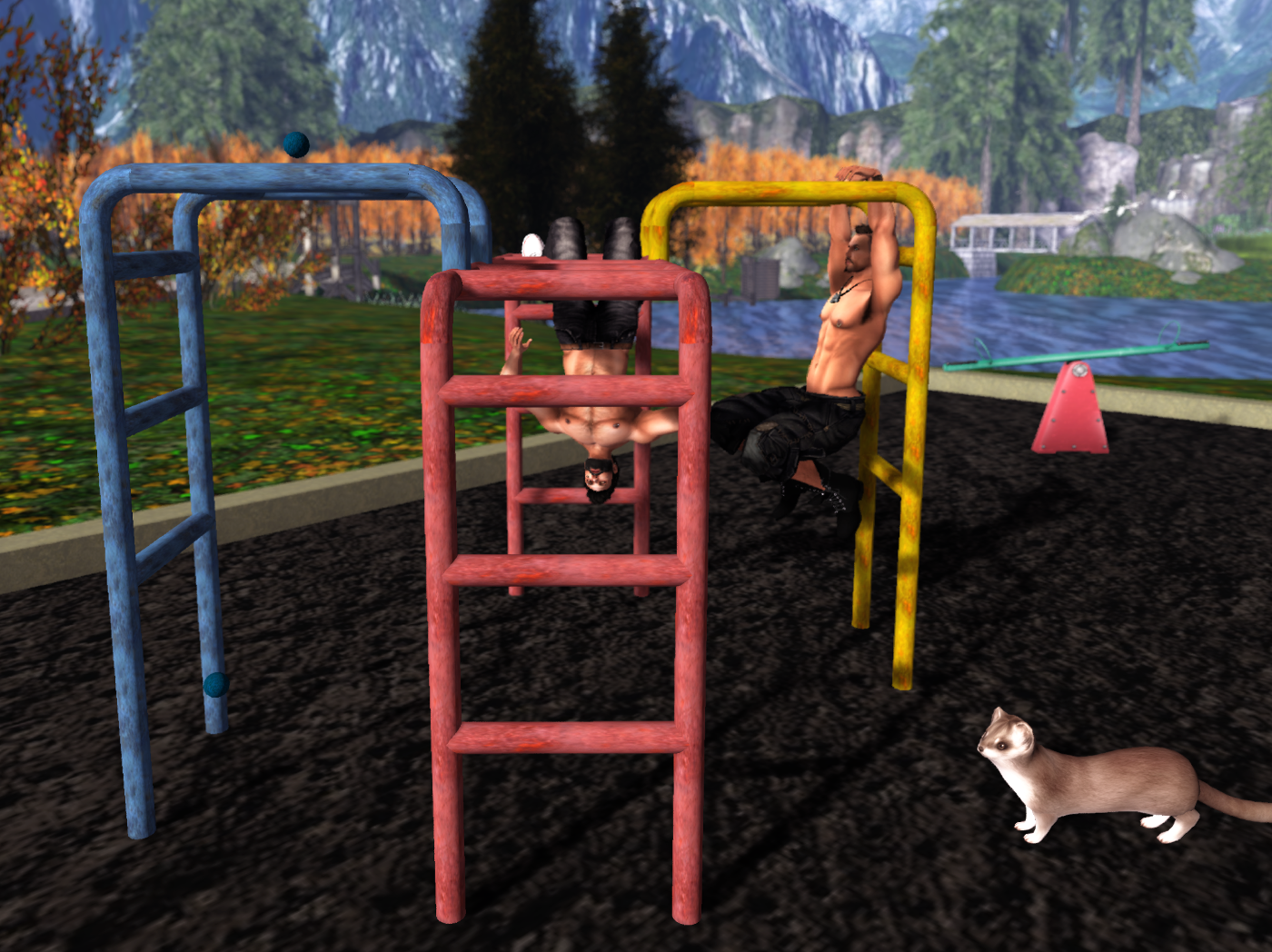 Ricco, Randy and the weasel

The town itself brings some attractions: a decaying movie theatre, some curious buddies waiting at the bus stop, games at the main square and at the harbor, a firework machine on the top of the abandoned boxcar near the train station. There are two bicycle rezzers located at the central plaza: one for single bikers and one for couples. A boat rezzer can be found at the pier. At the playground, the recreation equipment actually works. Beside the farm-house, one can see Randy’s garden and then the woods.

Randy and I included a very special building in the town: the Post Office, which is our tribute to Keebo Kidd. Keebo has been important in my life from the day we met, and he’ll always be a part of me. 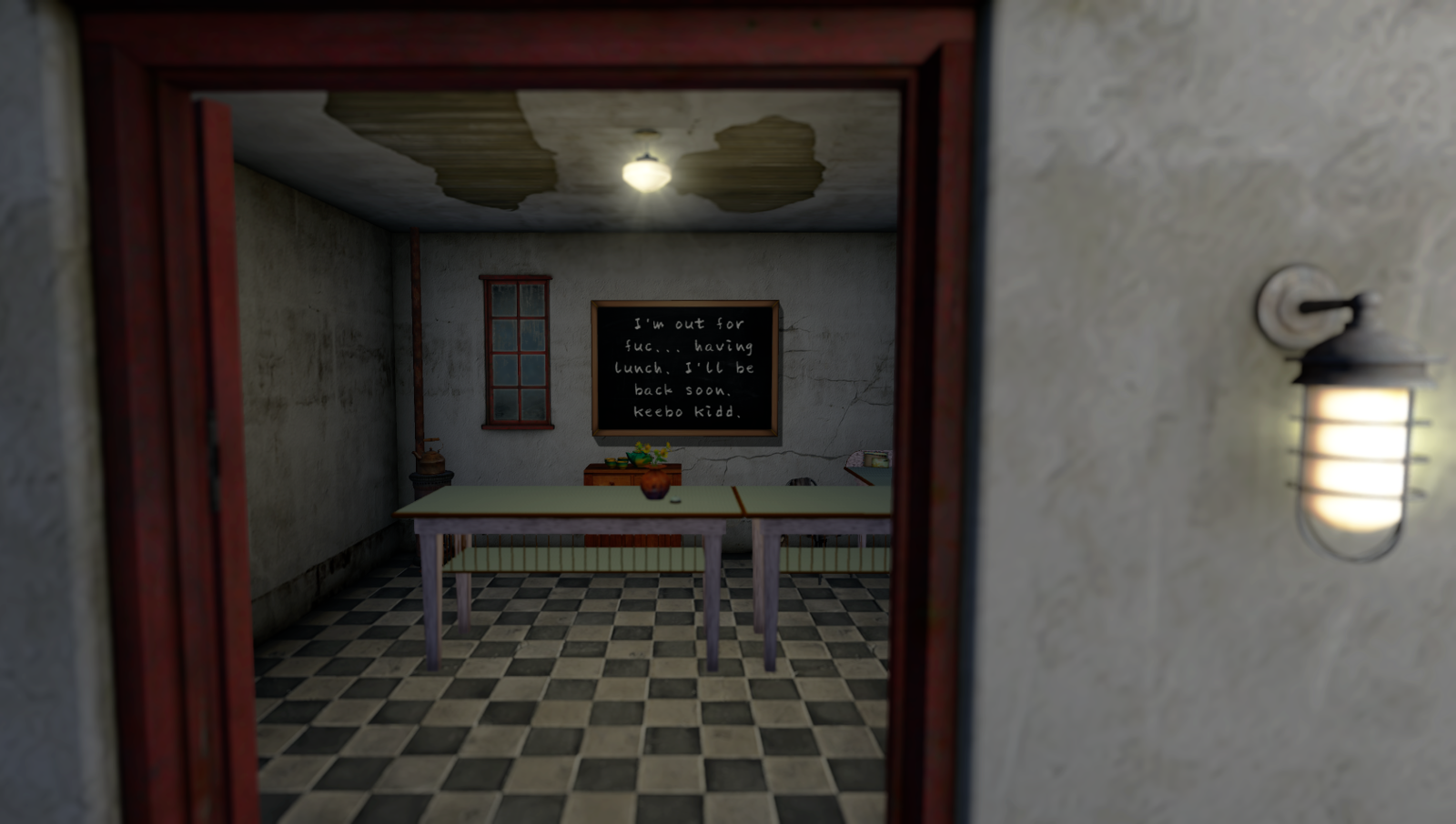 In short, that’s the description of my home – mine and Randy’s. It certainly reflects who we are, not only individually, but also as a couple. How about yours? How is your home? What does it tell about you? I imagine that an interesting observation enterprise in Second Life would be to visit other people’s homes in order to pay attention to every detail and try to decipher them. It doesn’t really matter if I’d arrive at the right answers or not, the exercise itself would already be curious. Maybe some day I could try that, who knows? 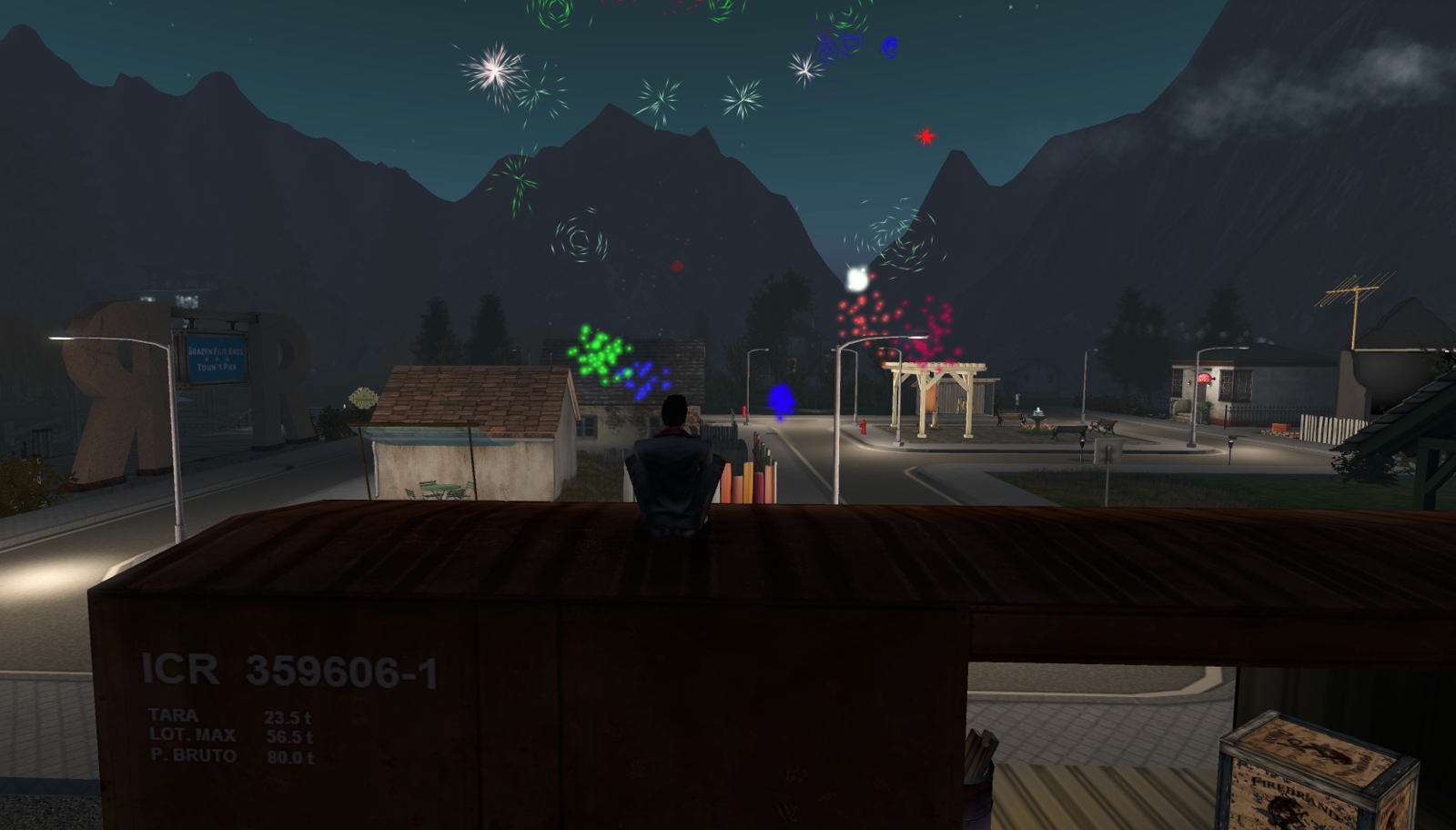 Fireworks over the town