Mediamorphosis is a multisensory and interactive art installation by Djehuti-Anpu (display name), or Thoth Jantzen (user name), that has been in Second Life since 2013 and which, two years later, keeps being impressive for its spectacle of lights and music and for its immersive strength. Made of five more or less connected parts (or six, if you count the entrance), it draws from technology to create a fascinating unfamiliar and beautiful art work – reminding us that SL itself, even being 12 years old (or a bit older than that, to be more precise), is a technological development that has helped and still helps us expand our own boundaries.

The link between all the different parts of Mediamorphosis is the way light patterns respond to music, or vice-versa, in all of them, including at the entrance. At the very landing point, if you observe the logo of the exhibition, you will notice that. 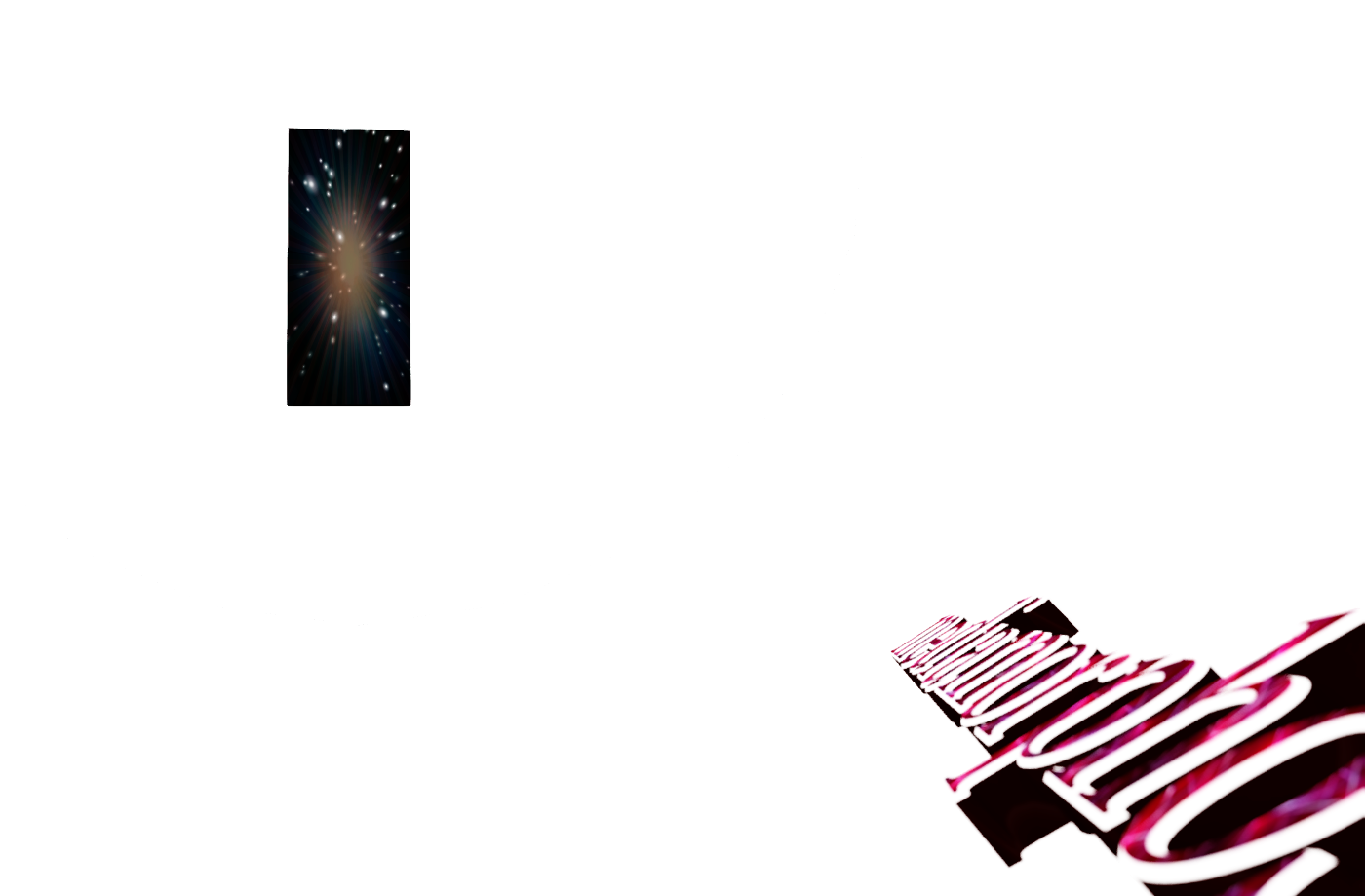 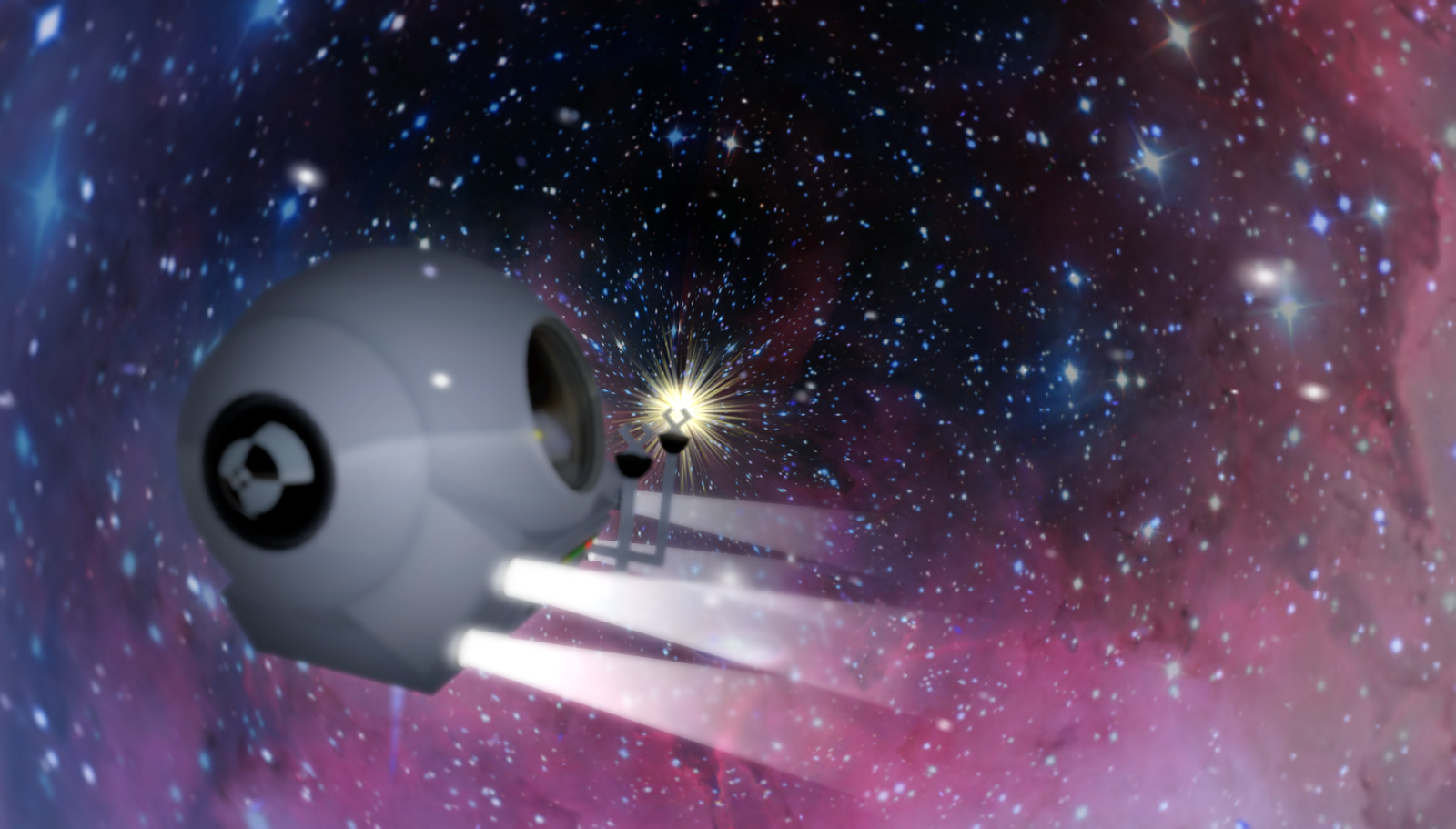 Apart from the exhibition logo, the arrival point is a big white box with some sort of star gate or wormhole that invites you into a space trip towards a modified 3D version of Nighthawks, Edward Hopper’s famous painting. It’s important to notice that the scene is inspired by the painting but doesn’t try to reproduce it. There, above the diner, you will read “The Hopper”, instead of “Phillies”, which appears on Hopper’s original work. Besides, you will be received by a hominid creature with an eye-shaped head that keeps watching you as you move. 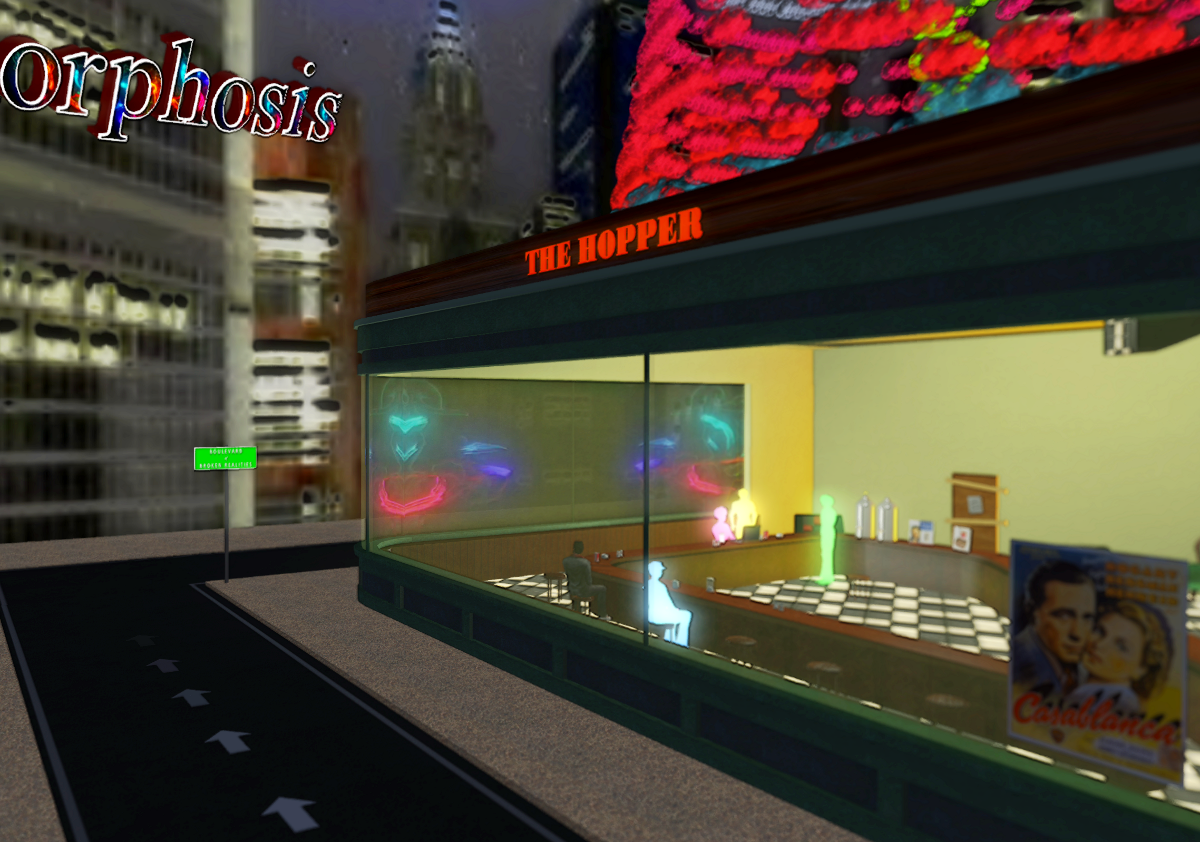 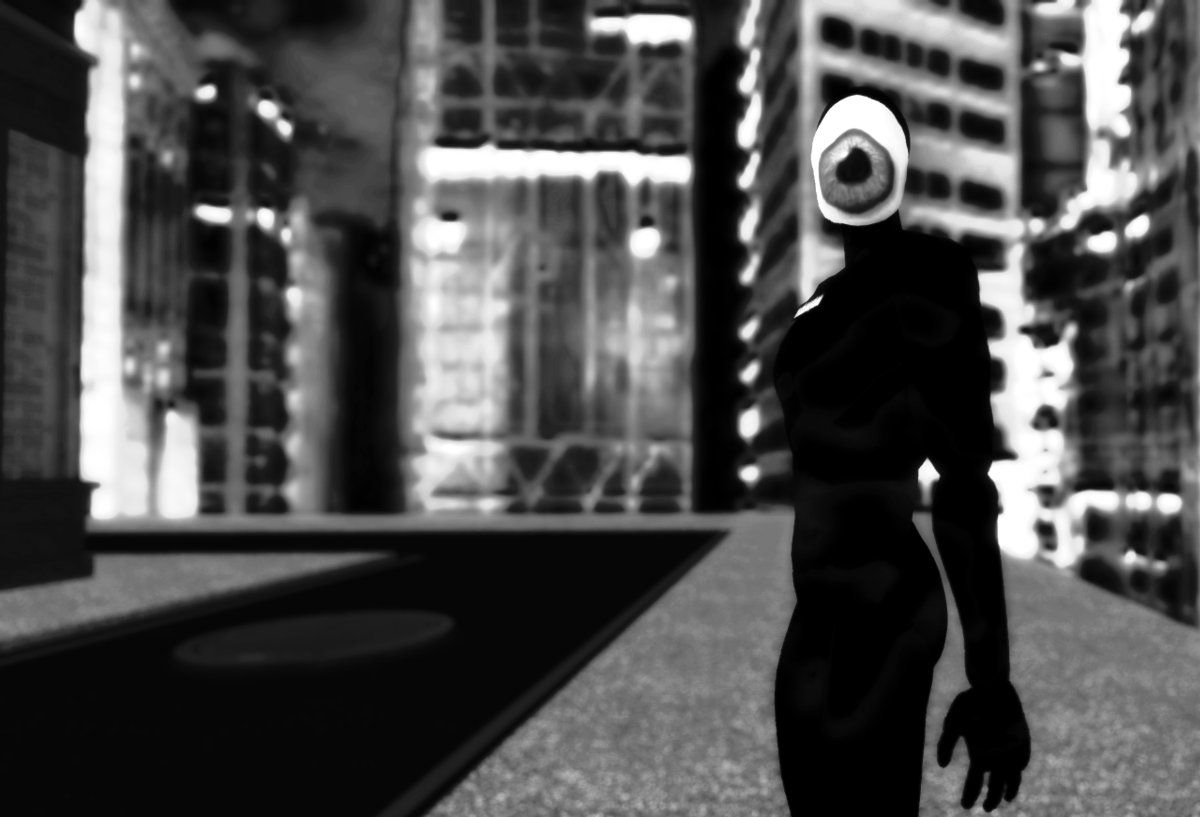 “Can’t take my eye off you”: the eye-man

It is worth noticing that all the hominid creatures – including the bright ones – at the different scenes respond to mouse clicks, giving tips to the visitors. The eye-shaped face man is the first one of a series and it actually gives an important warning: the exhibition may not be recommended for people who suffer from epilepsy or who may be affected by bright light patterns in constant change.

The eye-man also highlights the interactive characteristic of the exhibition and reminds me of some classic interaction-based works from the era inaugurated by video art. In particular, it brings to my memory a video installation called Tall Ships, by Gary Hill. I’m not stating that Djehuti-Anpu made an intentional reference to Gary Hill’s installation – it may be the case or not, it doesn’t really matter. Still, I cannot avoid tracing a parallel between both oeuvres, in that specific aspect. In Hill’s Tall Ships, projected images of persons walk towards the spectators that approach them, or turn back and go away as the spectators, themselves, recede. As they move closer to the spectators, the projected persons seem to keep observing the real visitors, questioning somehow the boundaries between observers and the observed art piece. In a way, that’s what the eye-man at Mediamorphosis does, by staring at the visitors. Of course, his big eye-shaped head adds a somewhat paranoid element to the scene, what doesn’t seem to be the case in Hill’s installation. 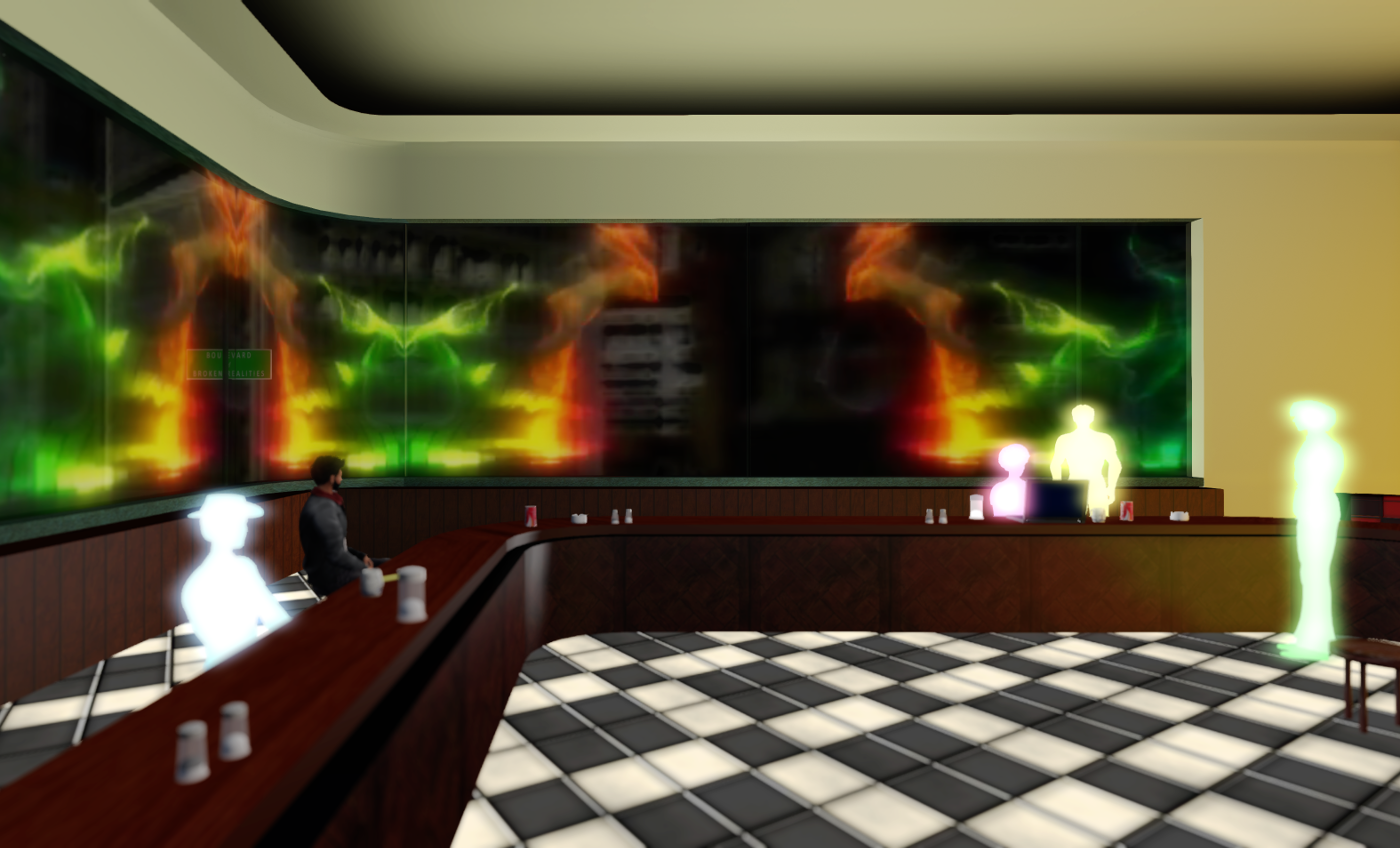 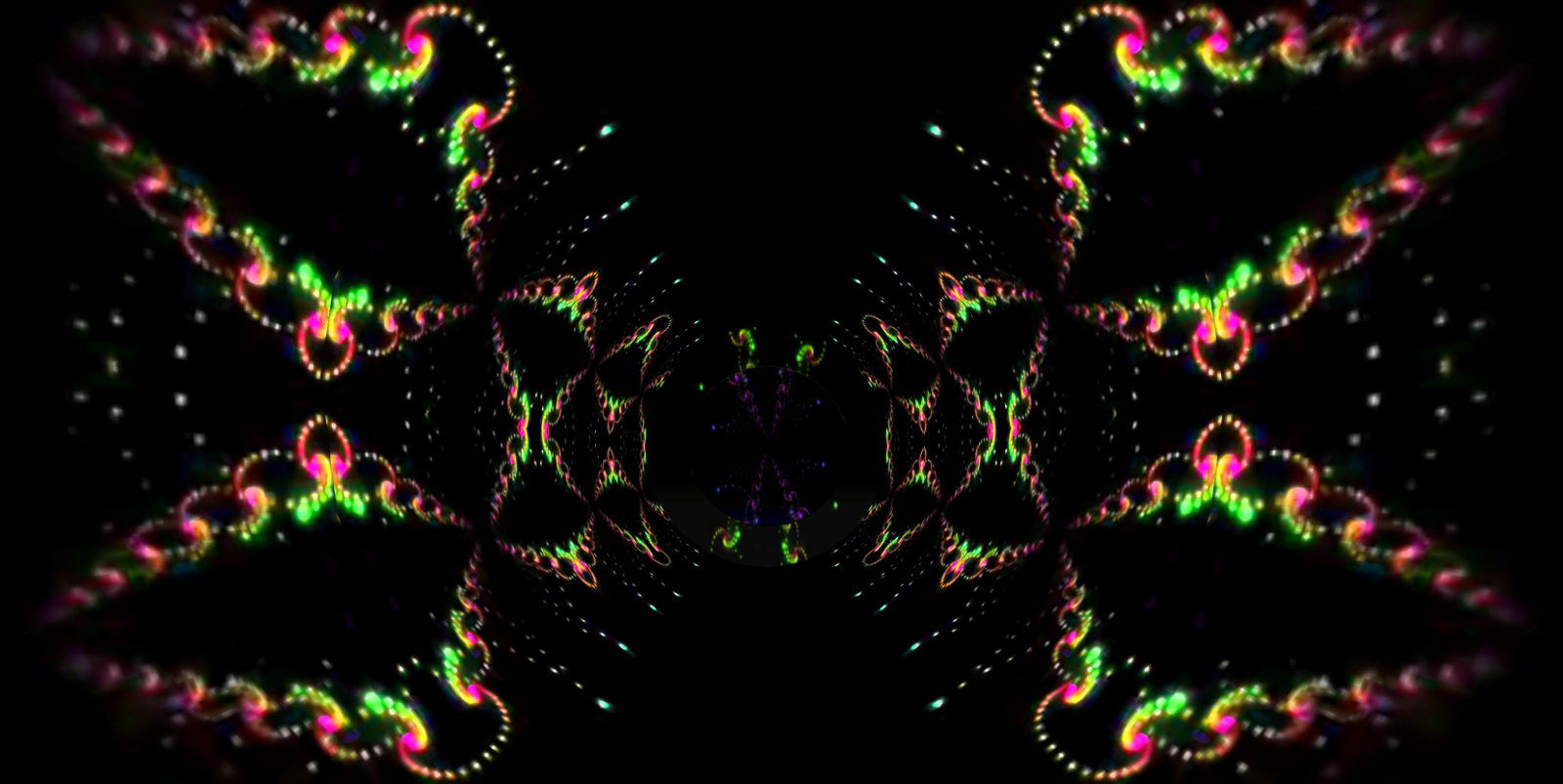 One of the many changing light patterns

Apart from that, inside the diner, the windows keep displaying the light spectacle that goes with the music. The dancing lights are beautiful and are a bit like those already traditional visualizations of Windows Media Player that keep varying according to the sounds – considering both rhythm and intensity – that are heard. Let me be clear about it: by saying that, I’m not downplaying Djehuti-Anpu’s work in any way. First, because, to be fair, Mediamorphosis’ patterns make more sense in relation to the music than the Media Player’s ones; second, for they are a part of the work, interacting with other elements; third, because they are immersed in a 3D environment in which the observer moves and watches them from different angles, “enters” in their domains and gets surrounded by them. (There are other elements inside and outside the diner, but I won’t give them all up. Remember, though, to look at the ceiling and the roof of the building if you go visit the exhibition). 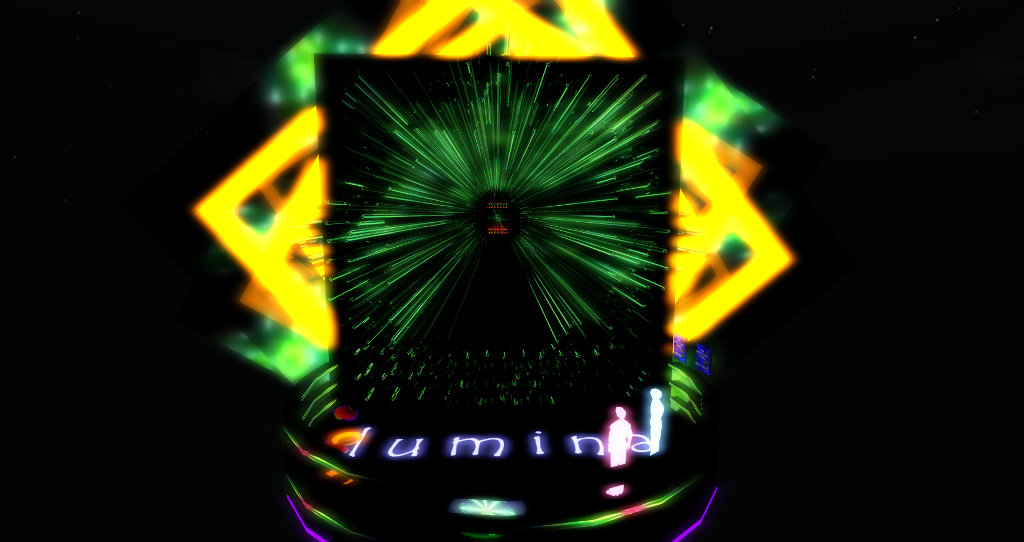 The spinning building: Click on the image to see an animated gif. TAKE CARE if changing light patterns affect you. 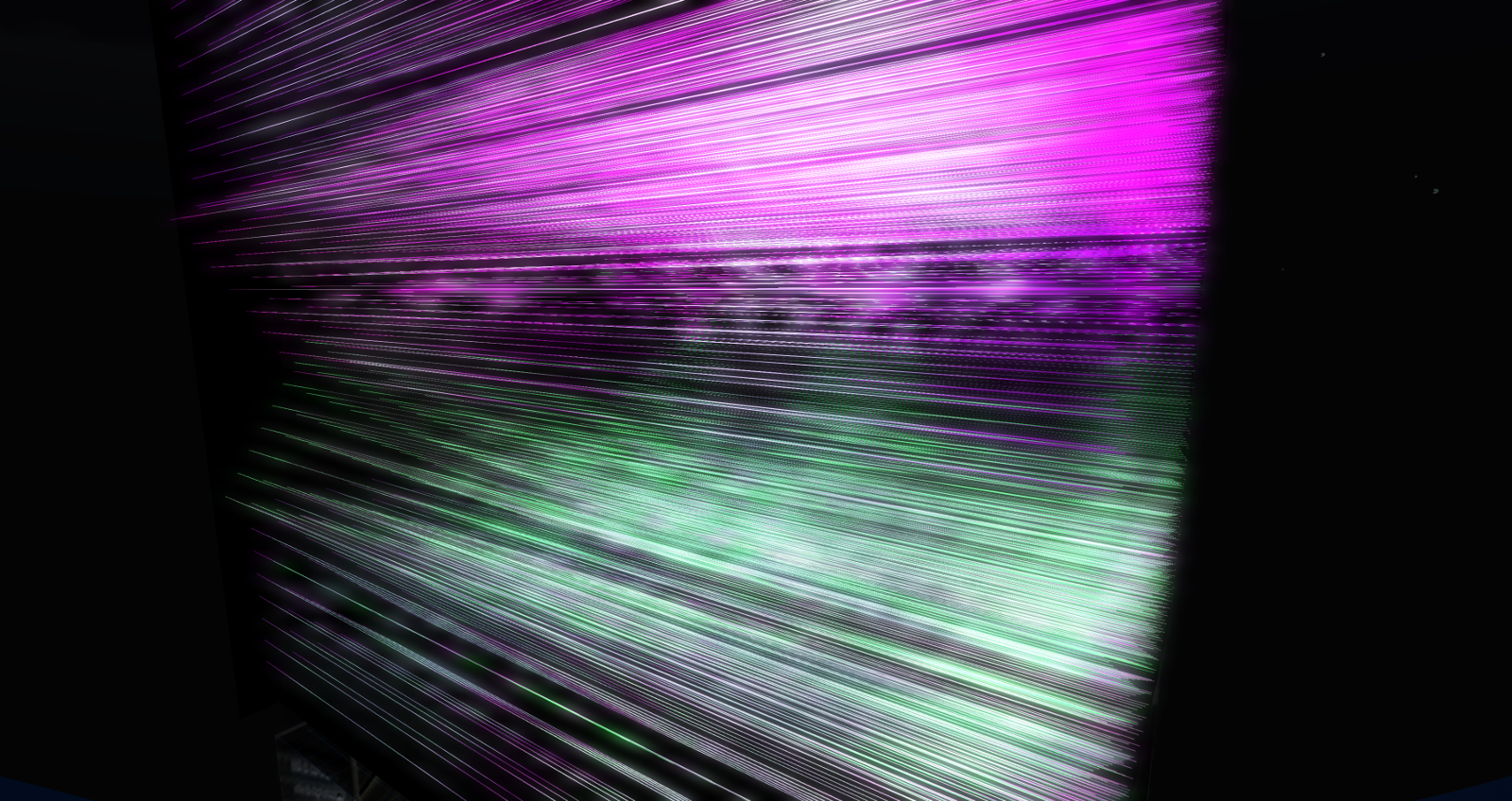 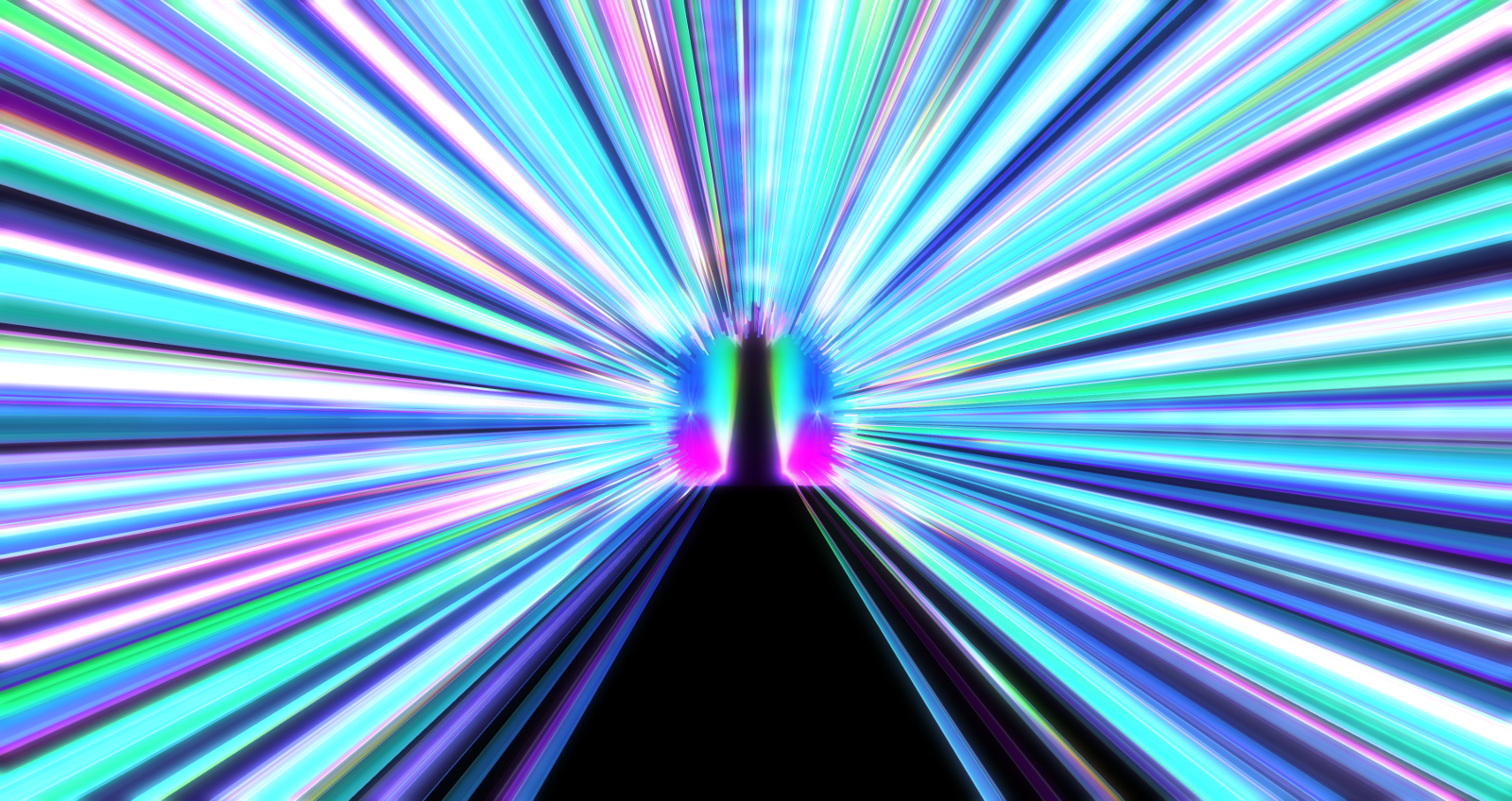 The other parts of the installation are even more light-pattern oriented. The second and the third ones (following the numbers that you can find on the teleport system) are especially so, being corridors that take you right into the bright explosion of colors. Inside them, you get surrounded by light beams that seem to swallow your avatar into an impressive spectacle. Particularly, in the third part of Mediamorphosis, those beams and the light patterns interact with a building made of different sections in a row, that keep spinning around as if they formed a perpetual motion machine.

Building made in sections 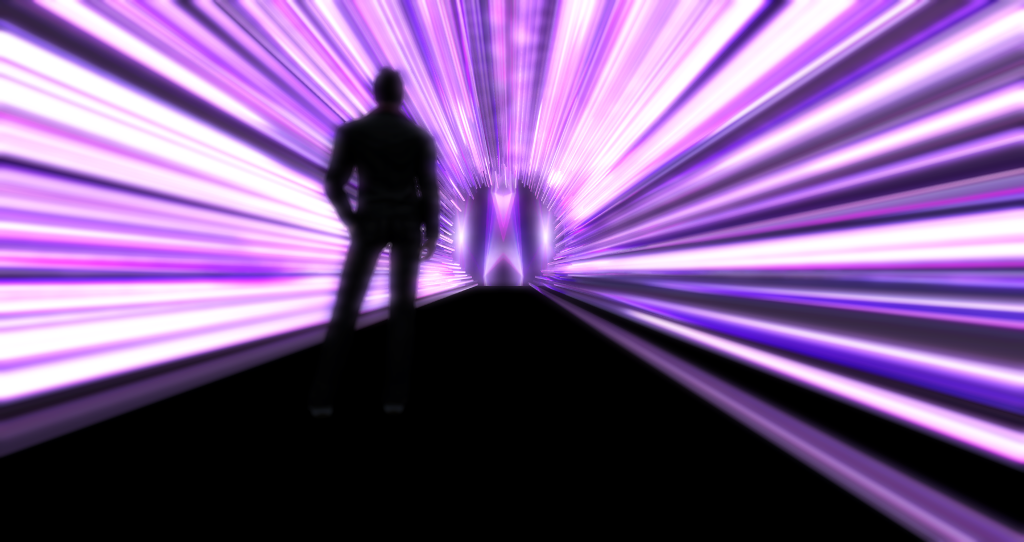 Ricco observing the light beams: Click on the image to see an animated gif. TAKE CARE if changing light patterns affect you. 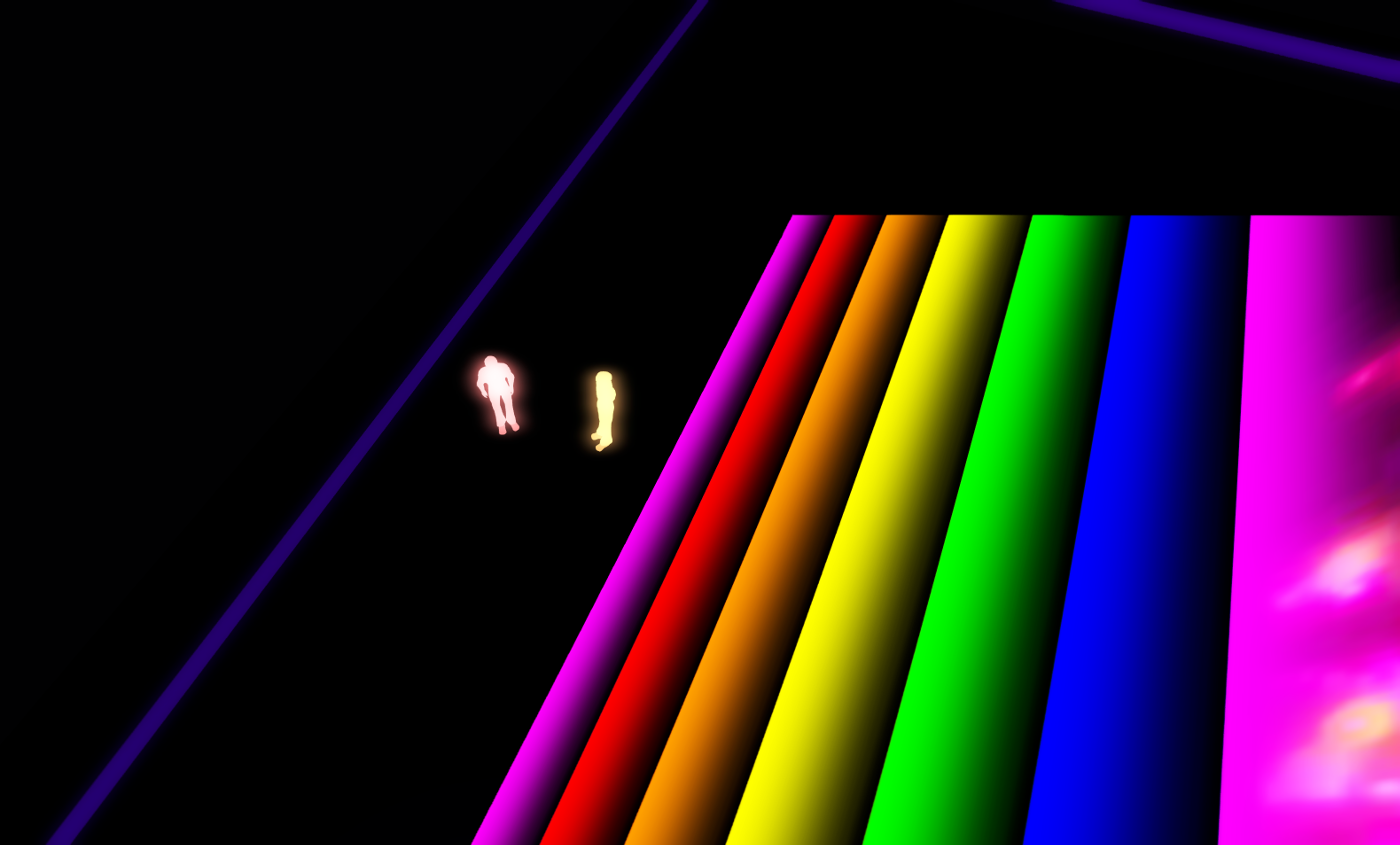 Stairs to the maze 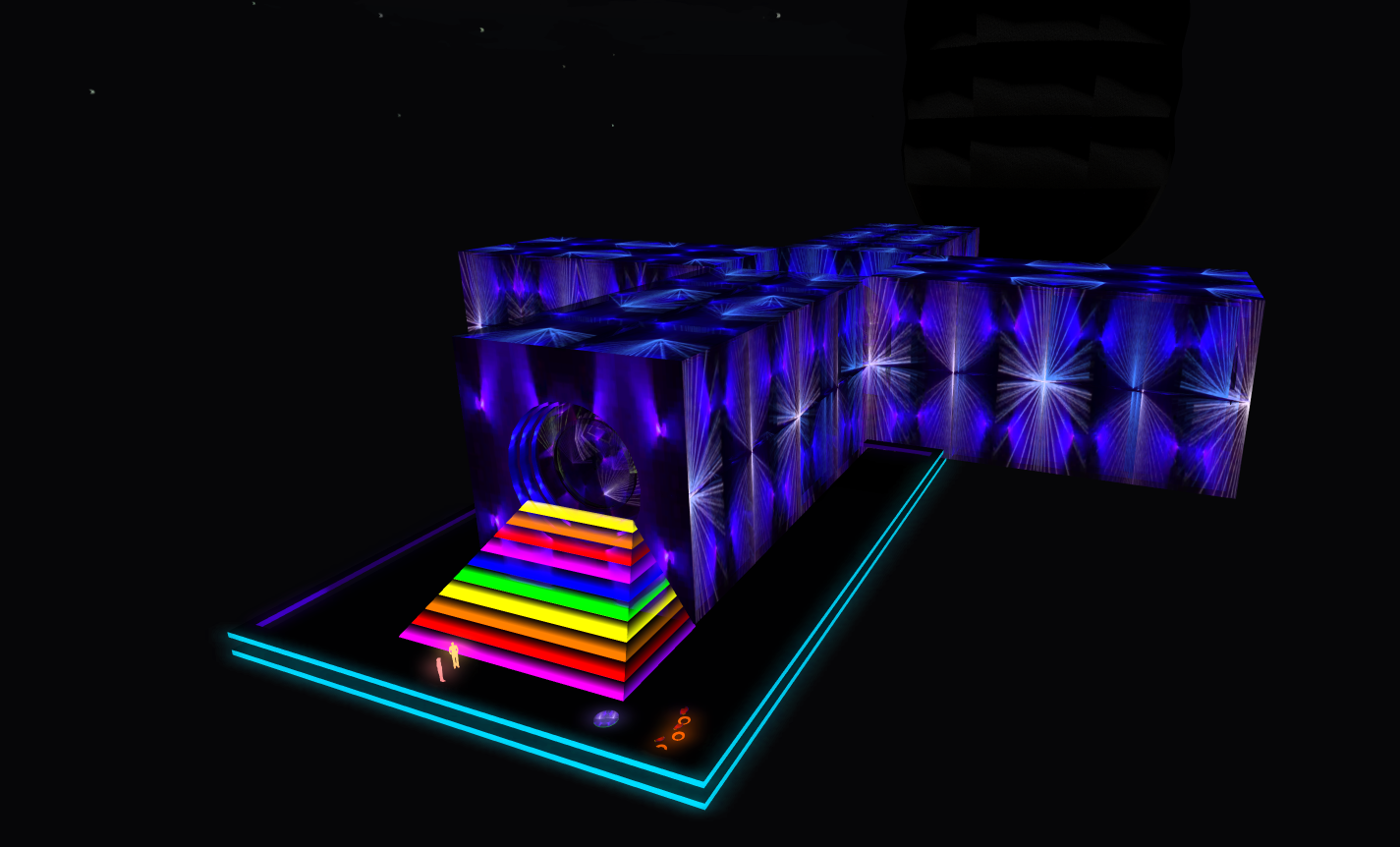 The fourth building is more labyrinthine. Actually, it is just a cross-shaped structure, but the changing patterns can make the visitor somewhat dizzy. Thus, finding the way back to the entrance may be a bit tricky. In a way, it’s like being a rat in a radial arm maze – with a twist. Classically, that kind of maze is made of eight arms that converge to a common center. In the most traditional experiments involving such structure, some of those arms have food at the end, hidden in a way that the rat cannot see it without getting closer. So, the rat has to find food by going through a random arm – and if food is not there, the rat has to go back to the center in order to choose a new arm. After doing it again and again, it’s expected that healthy animals identify some marks, inside and outside the maze (if the walls are transparent), that help them find their way more easily, avoiding the need to test each arm randomly. Well, as I said, Djehuti-Anpu’s maze is more or less like that, but it brings remarkable modifications: first, we are not searching for food, but for an exit, and only after we are done admiring its inner tunnels; second, it only has four arms, what makes our task easier; third, compensating the simplicity of the building, there is no way of identifying marks inside or outside the maze, for the walls are opaque and what you see on them are changing light patterns that respond to the music and which are exactly the same in all arms. Of course, since you are in SL, you can always use your minimap to navigate out of the building. Or you can ignore the minimap and play around a bit. 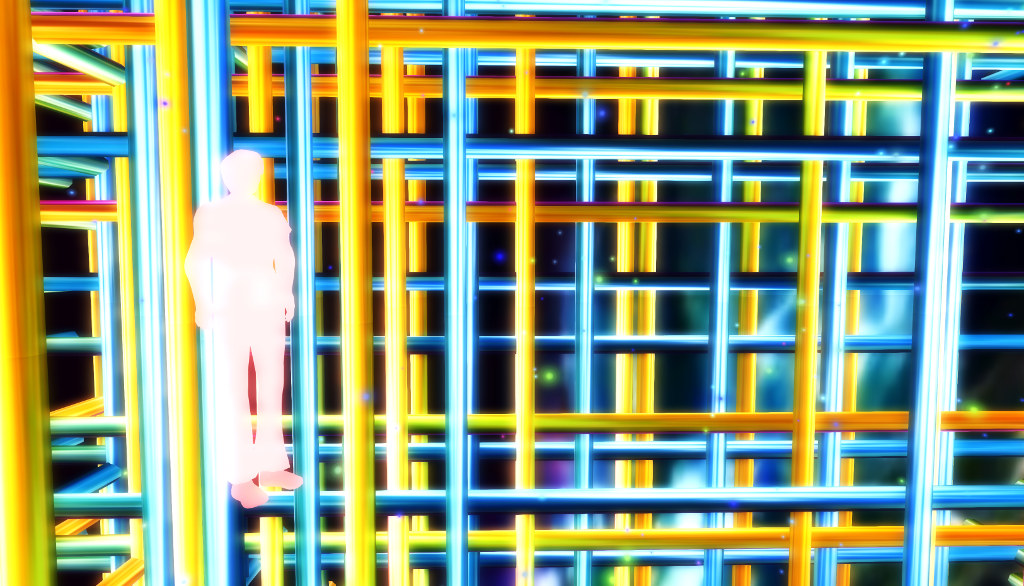 Net of tubes: Click on the image to see an animated gif. TAKE CARE if changing light patterns affect you.

The fifth and last part of the exhibition is a cube made of tubular structures that form a net. It is immersed in a space where, again, changing bright colors and forms are projected, affecting the very tubes that form that sort of 3D matrix. It is particularly interesting to walk in that cube and to move our camera around, while observing how light dances to the sound of the music that is played – or, if you prefer, how music plays to fit the changes in light and color, as if the images were like the conductor of an orchestra. 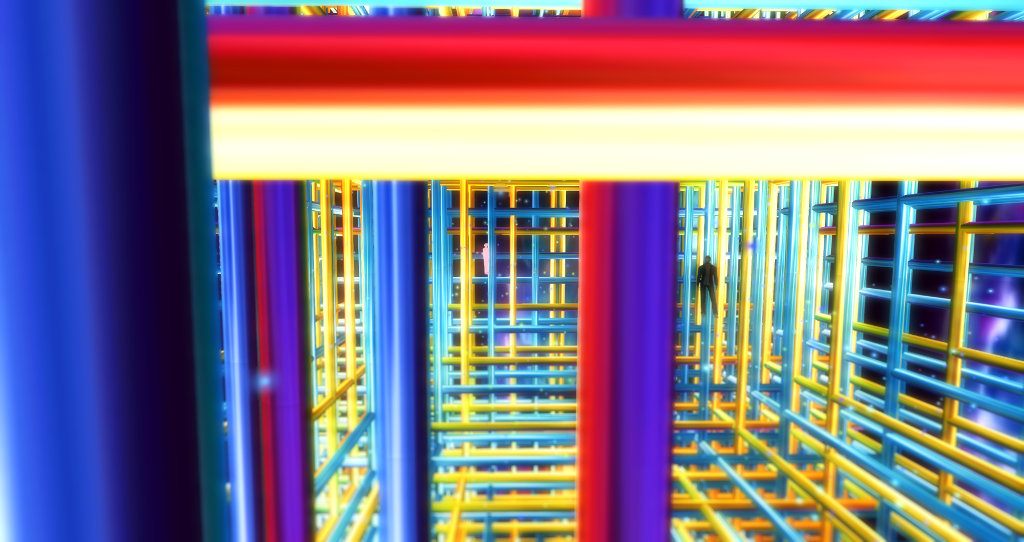 The cube: Click on the image to see an animated gif. TAKE CARE if changing light patterns affect you.

Taken as a whole, Mediamorphosis is like a refined dream of music, lights and colors. Those are the elements, to a great extent, which it gets its force from. The buildings that serve as canvas to the dancing lights are simple. In some cases, very simple, indeed, as the four arm maze or the first corridor of light beams. For what really matters in Djehuti-Anpu’s installation is not so much the solid structures, but the immersive experience offered to the visitors. And, to conclude, it is worth noticing that what the public finds at Mediamorphosis is immersion inside immersion, because it is such an experience brought to SL – which, by its turn, is already a technology designed to transform a 2D screen in a space where people behind avatars can somehow feel themselves surrounded by a 3D virtual space with which they interact.

One thought on “Immersive video art meets the virtual world”