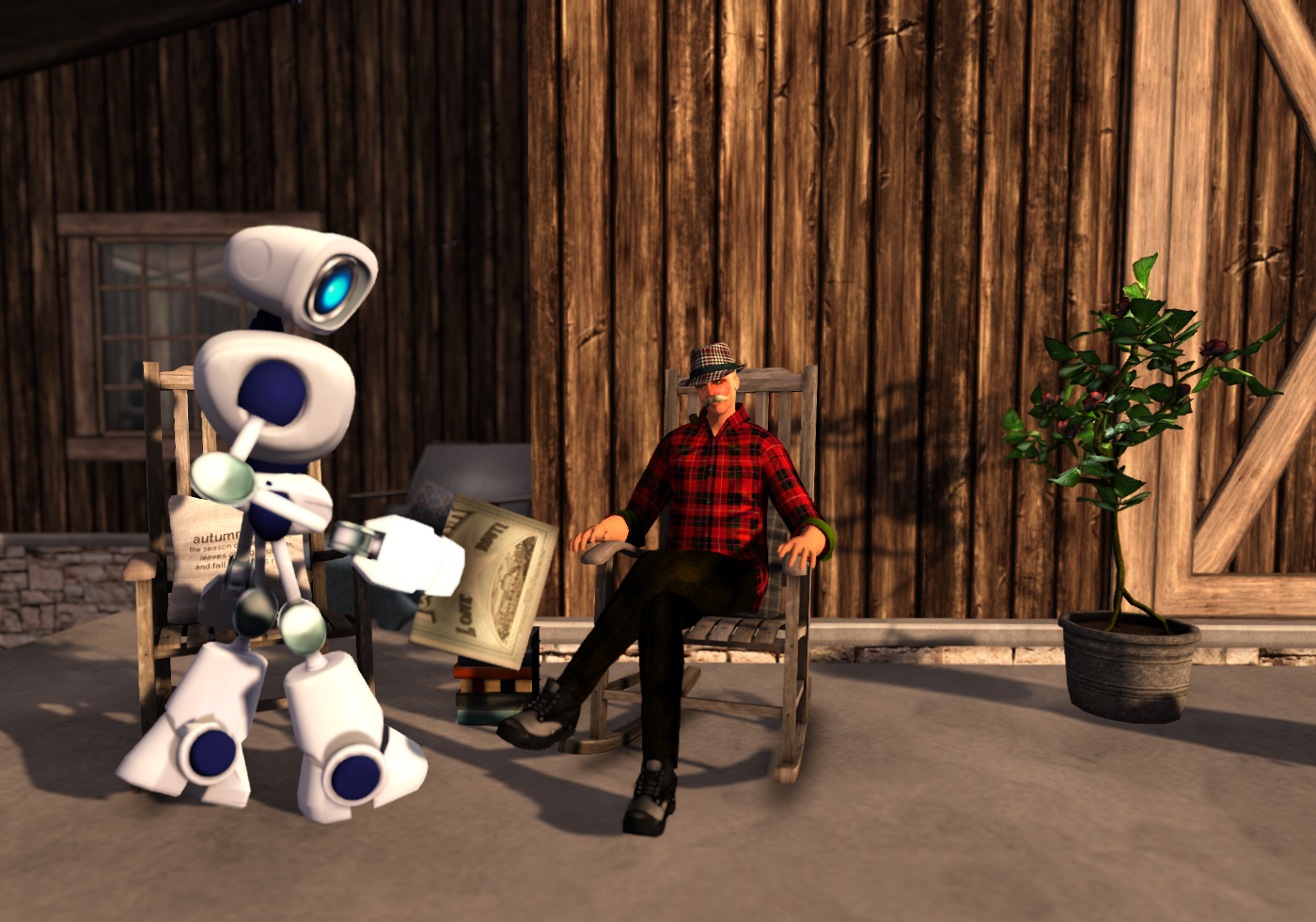 A robot and his mature human friend in SL

Because Second Life carries the aura of an idealized world, we may develop the illusion that, while connected, we are protected from the main prejudices of the atomic world – except, perhaps, if a griefer crosses our way. The reality is though that we are not. How generalized is bigotry in SL? I haven’t heard of any specific research about this subject, but maybe someone has already measured it. Anyway, it seems that there’s evidence here and there that discrimination is not irrelevant in the virtual world.

Back in March, I read on Heimo Blog about a gay couple who was told not to dance together “up front” and, instead, was asked to move to a more secluded area of the sim because that was a straight place. I found more details on the case on Cryssie Carver’s blog and on a post by Cajsa Lilliehook published on It’s Only Fashion. Of course, it led to a controversy on SLUniverse, with people for and against the sim owner’s right to establish the rules he wanted on his land. That’s not my point here, though, and I don’t mean to crucify anyone either. The sim owner has apologized and I don’t intend to add even more intolerance to that discussion. I’m just taking this episode as a point of departure for a reflection on what world we have been building in SL and on what world we may desire to build. 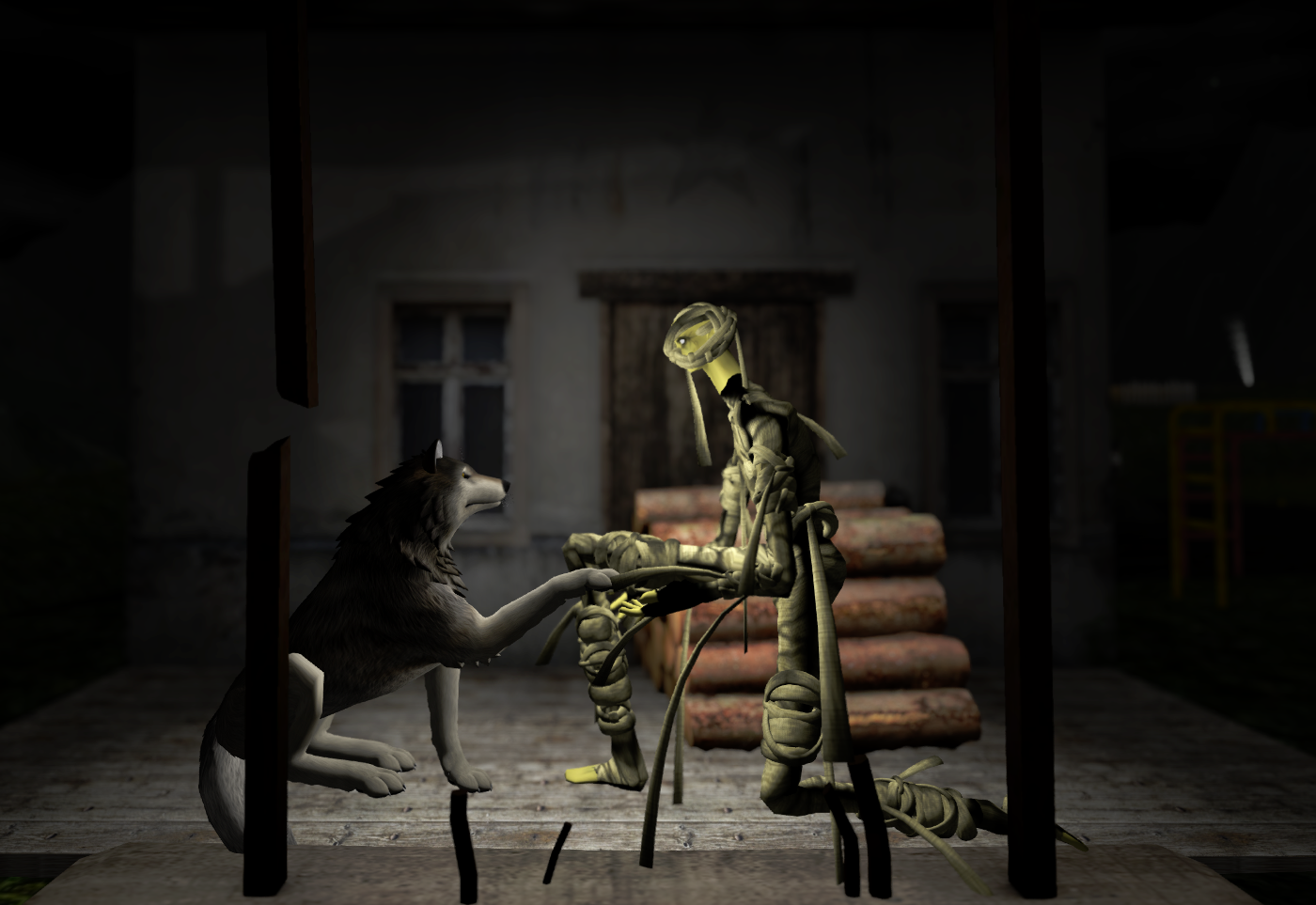 The mummy greets the wolf: diversity

It may be just an impression, but it seems to me that when I joined Second Life, back in 2007, I could find a wider diversity of avatar shapes and ages. At least, they were more likely to exist. Now, with mesh clothes and bodies, the “average avatar” became even more favored than before – at least if we are talking about human avs. And what’s considered average in the virtual world, let’s stress it, is mostly the young, athletic, muscled or, in some cases, idealized thin bodies that are more easily found across different sims. To be fair, if you search for “chubby” on Second Life Marketplace, you will even find a certain number (small but maybe not that insignificant) of female avs, human or not, that correspond to such description, but only a very restricted quantity of male avs, and rarely a mesh one. Clothes to fit them? That’s another headache. This is a case in which the ideal world, created as a virtual reality, instead of increasing our possibilities, actually reduces diversity. 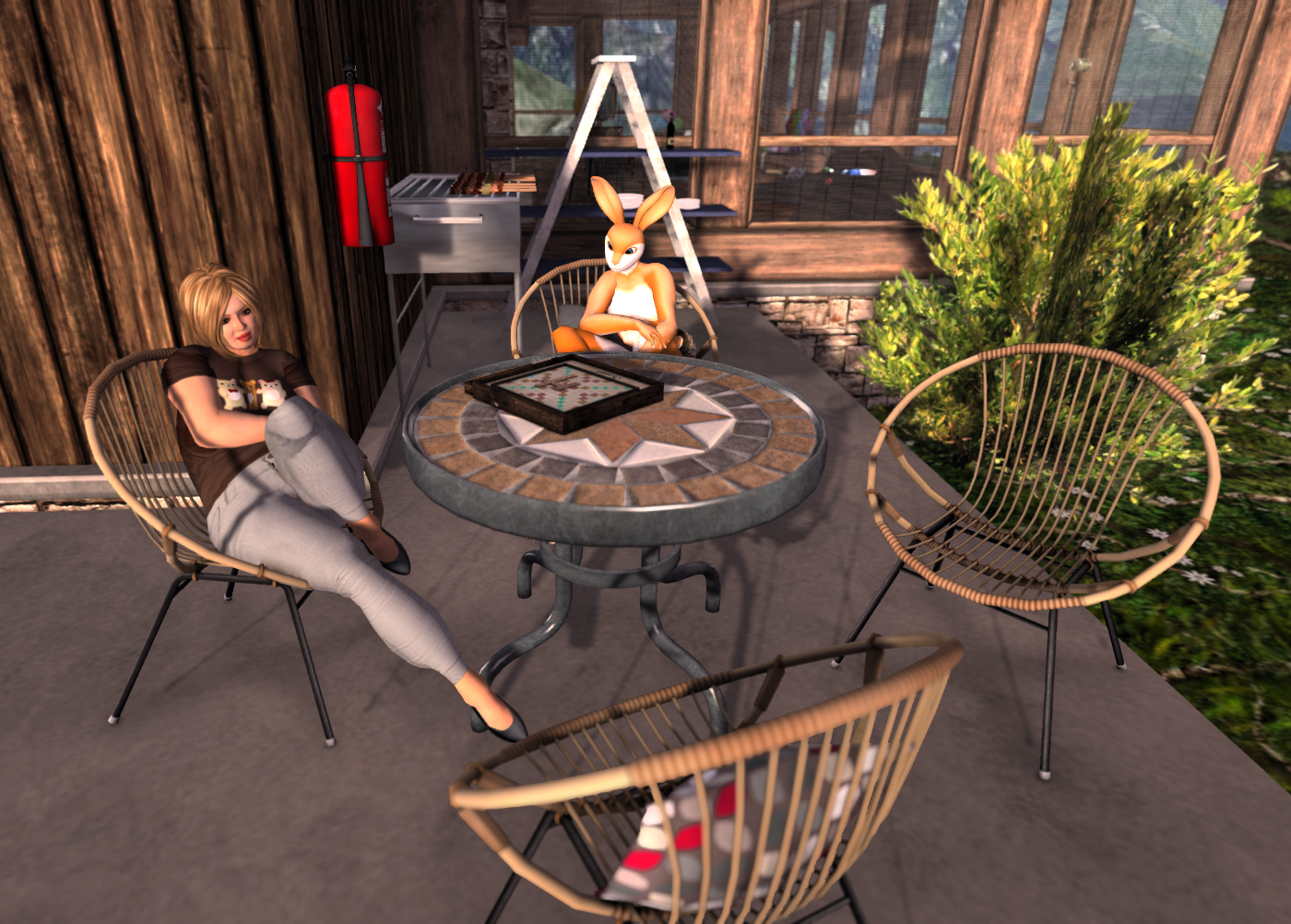 Woman and furry: despite the different shapes, they can play the same game

Well, but this is not discrimination, it’s just a market phenomenon, right? In other words: couldn’t the small supply of chubby avatars be explained by the reduced demand for them? Probably, yes, but what I’m arguing here is that, behind such a supply and demand dynamic, there may lie a prejudice that sometimes comes to the surface without people even noticing. It seems to me that this is the case with Bid Me Bubba, carried on last May as an activity on behalf of Relay For Life of Second Life (RFL of SL), a fundraising event for the American Cancer Society. On its poster, we are informed that the average (to SL standards) Marina “has to stay” as Bubba for one day, for every L$ 5,000 donated to the campaign. Bubba, in that case, is a fat avatar that, for his pose and leather clothes, looks like a stereotyped gay bear-type man. We should notice that there is a somewhat similar activity related to RFL of SL, called Bid Me Bald, in which a person accepts to go bald for some time in exchange for a certain amount in monetary donations. The idea is that, while raising funds, the person will make a “sacrifice” (the one of being hairless) as tribute to those who lose their hair because of cancer treatment. So, trying to draw a parallel, transforming into Bubba is Marina’s sacrifice, then? And whom exactly is she paying tribute to?

There is a certain controversy about allowing or not some avatars to enter a theme-oriented sim. Could gay couples be barred from straight regions? How about women from gay male nude beaches? Child avatars from dance clubs? Furries from human places? Where can we draw the line? 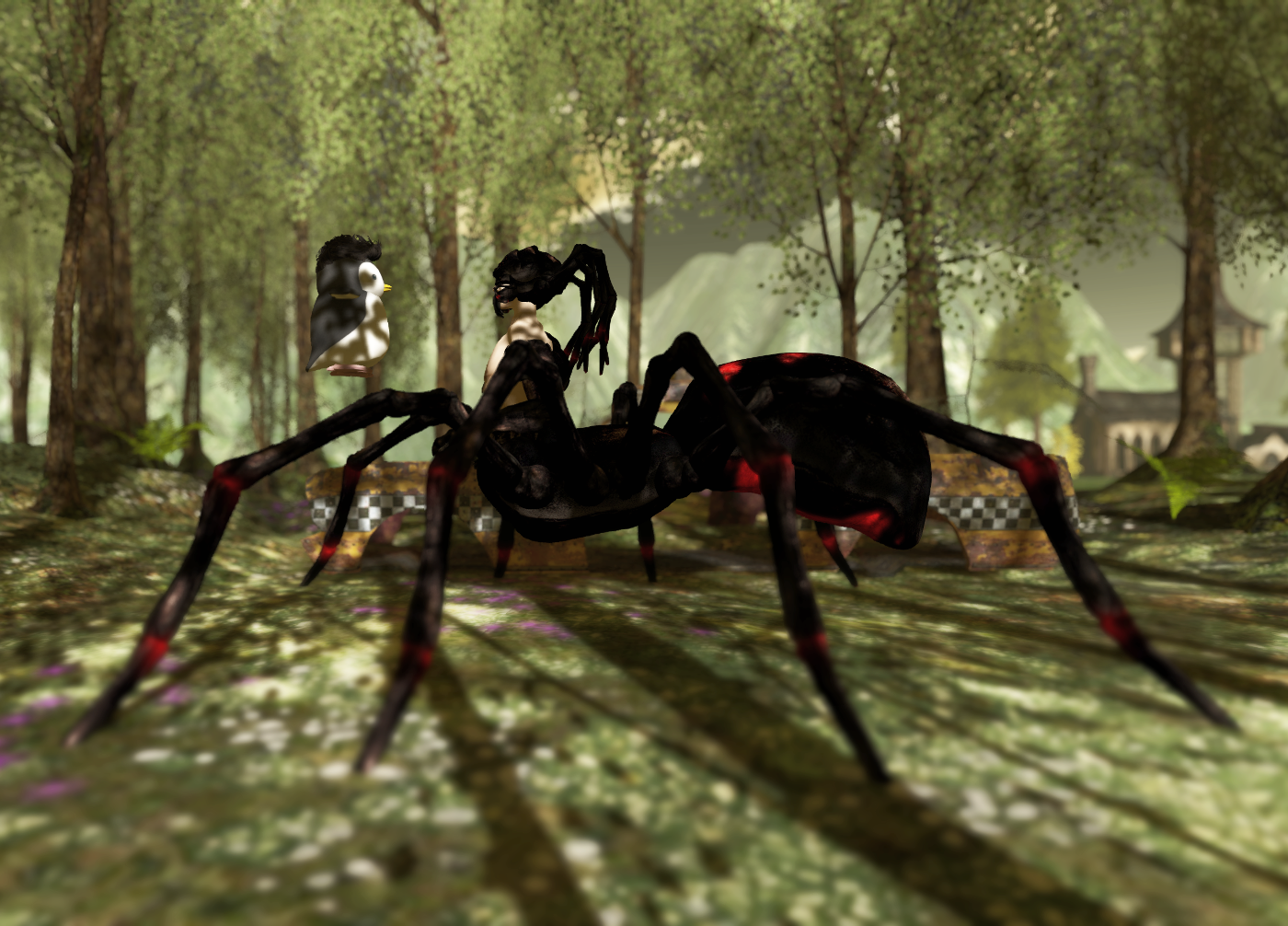 A tiny and a monster avatar: creatures of different nature coexisting in SL

From where I’m standing, I’d say that it’s fair that sims dedicated to roleplaying require visitors to adjust to it or leave. For instance, a place that emulates 1920s Berlin or Chicago may exclude furries, fairies, satyrs and other fantasy creatures, as well as cyborgs and such. Birds or dogs could fit the scenery, but wolves or pandas wouldn’t – so, ok, instead of making a long list of what’s allowed and what’s not, it’s easier to establish that visitors have to be human and that they should follow a 1920s dress code. Under that same reasoning, a cyberpunk futuristic sim may exclude Victorian-era avs, an urban roleplaying environment may not admit angels and demons, medieval sims may not welcome tinies and so on.

It feels different from all those cases to find a straight club that bar gay people or the opposite, a gay place that excludes straight avatars. Being gay or straight is not just a matter of roleplaying. Even though someone may play a character with a different sexual orientation or a different gender than theirs, being a straight person in a straight venue is not like playing a fairy in a fantasy sim. 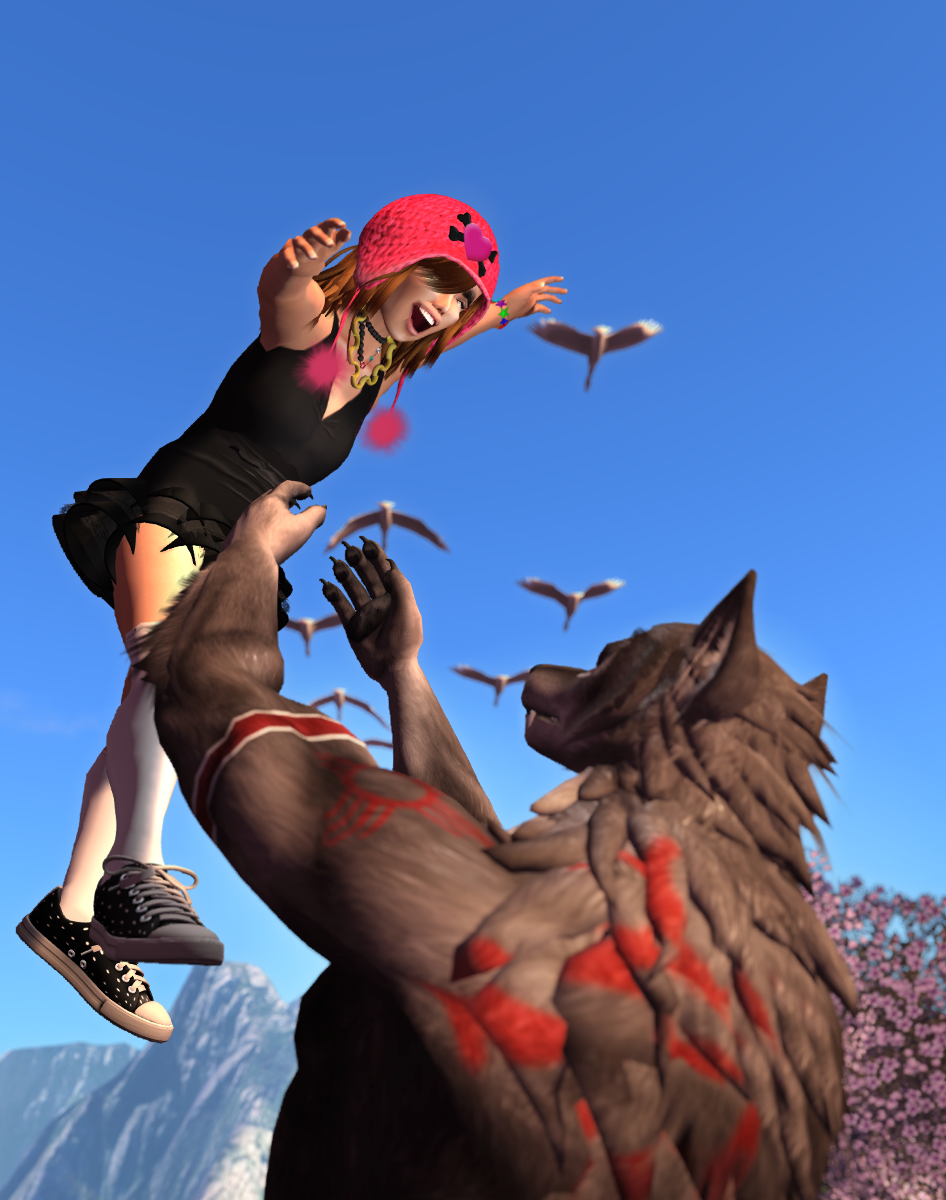 It’s also understandable to bar child avatars from adult sims where adult stuff may actually happen. Even if the person behind the child av is an adult, it can be argued that one does not want to stimulate the idea of depicting in the virtual world scenes that would be illegal or at least problematic in the atomic world. Also, one could require that avatars that go to family oriented sims behave according to the maturity level of the place. It’s not a matter of dispute, and actually Second Life’s Community Standards and Linden Lab’s Terms of Service already regulate both the access to regions according to maturity levels and the kinds of content that are allowed to display. On the other hand, I simply see no reason at all to exclude an overweighted avatar from going anywhere, as long as they comply with the dress code and maturity level of the sims that they would like to visit – and certainly no reason to mock of them as if they were just a ridiculous existence, a major sacrifice in a world of Greek beauties.

Let me be clear about it: I’m not discussing here if someone has the right or not to do whatever they want with their land as long as they comply with the Terms of Service and the Community Standards. My point is that, even if we observe all the rules, sometimes we may easily reproduce in Second Life the prejudices that we find in the atomic world. For those of us who actually care about it, isn’t it time to examine our conduct in the virtual world and ask ourselves what we are doing? If we aren’t excusing our prejudices by covering them up with our most noble intentions, like raising funds for a charity or creating a safe environment for people who already face bigotry in the atomic world?

In order to conclude with a positive perspective, I’d like to mention an initiative by Cupric Router that points to the opposite side, away from prejudice. Cupric works in SL as a DJ and founded Mosaic Guild Events, which he describes as “a group for individuals, clubs, event venues and organizations that are interested in participating in and promoting diversity and inclusiveness”. On those bases, events posted on Mosaic Guild “are welcoming of all individuals, regardless of gender, race, nationality, language, sexual orientation or avatar appearance”. It seems to me that that’s the way to follow.

All that said, I’ll end this post referring to the way it started, with a gay couple dancing: 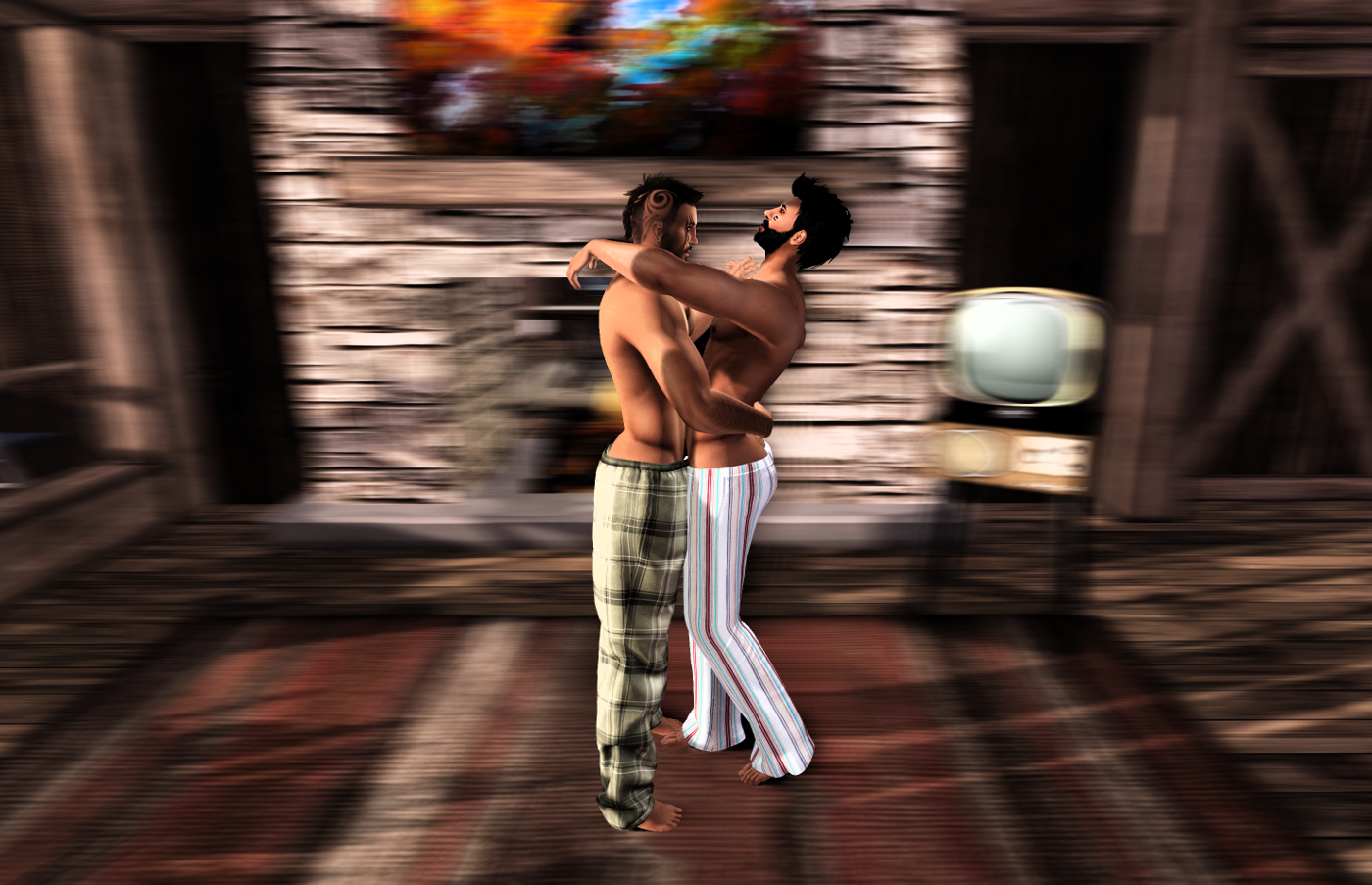 Randy and Ricco dancing at home

11 thoughts on “When prejudice infiltrates the virtual world”