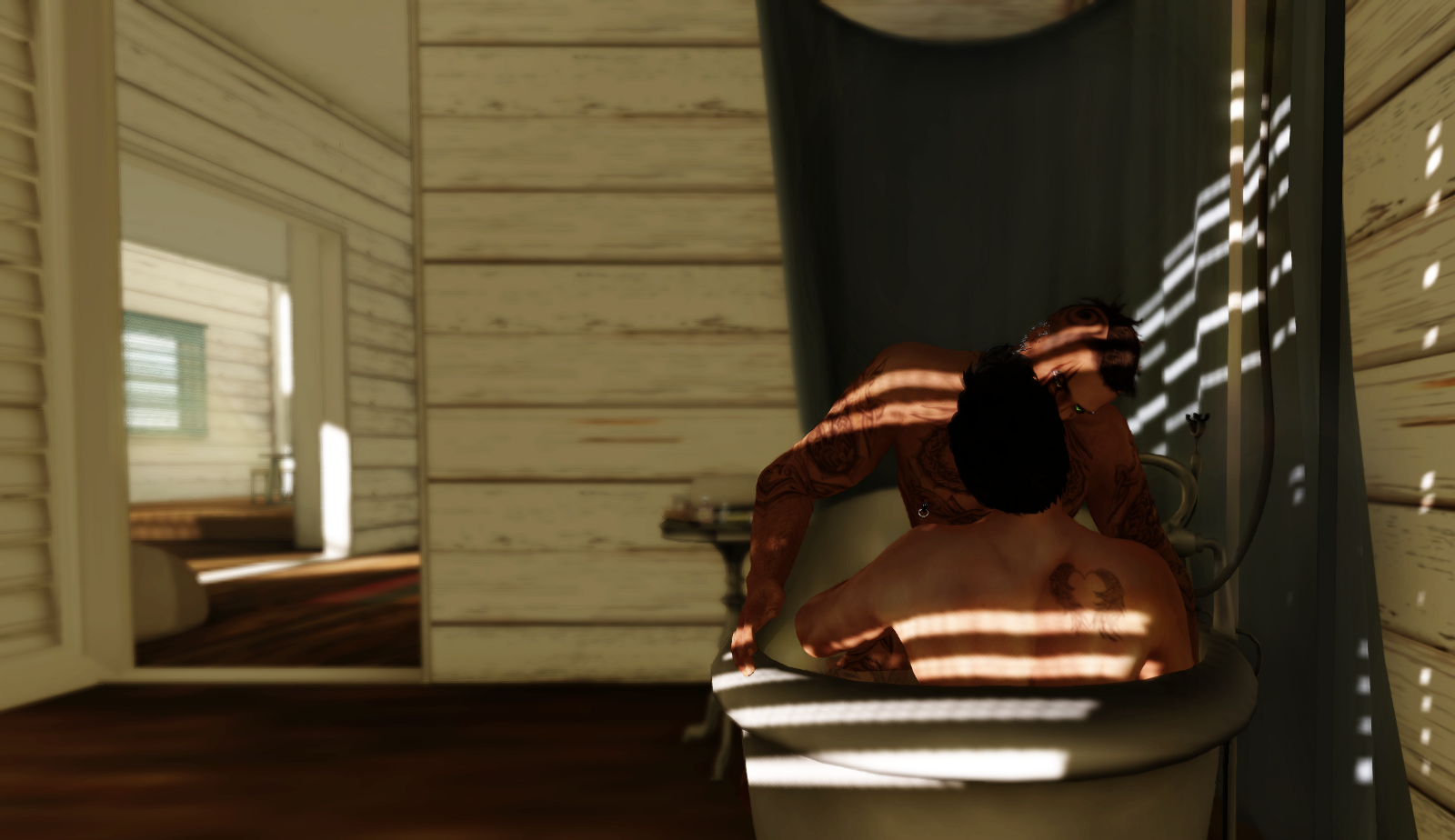 “Things we do at home”, featuring Randy Firebrand and Ricco Saenz

In my journey in Second Life, I have met a number of people who were willing to date, find a partner and have a relationship. Another important contingent is formed by those who are searching for sex regardless of having a partner. I think it’s safe to say that these two groups – and sometimes the same individual is in both of them or circulates from one to the other – encompass a large portion of SL’s population. And if my following reasoning is right, stating that is the same as concluding that a great amount of SL’s residents (including me) are hungry for intense communication and verbose narratives. This is curious, given the visual nature of Second Life, which could lead us to imagine a more contemplative behavior of its users (which also happens), but actually the very 3D environment of the virtual world collaborates with such a communication hunger. 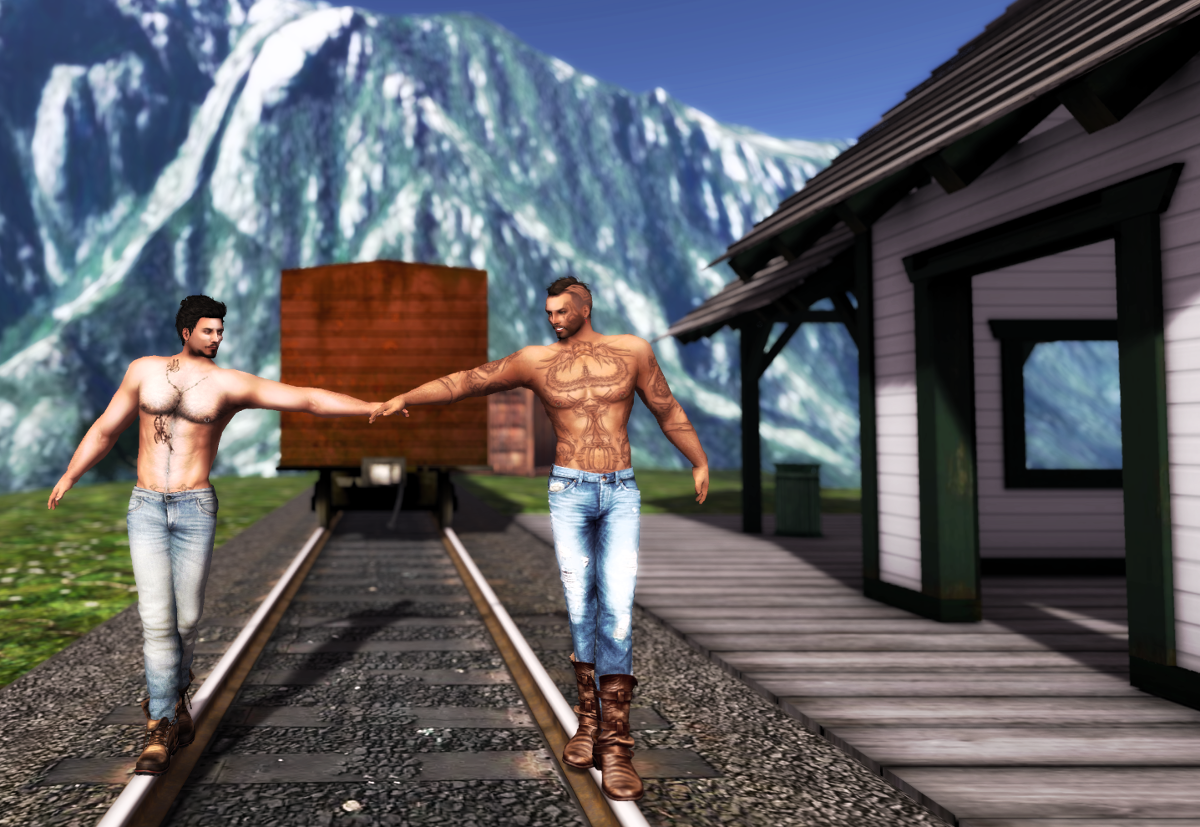 “Walking on the rails”, featuring Randy Firebrand and Ricco Saenz

In a very inspired (as always) post written back in 2013, Gwyneth Llewelyn argued that “in Second Life, there is a lot more communication [than in some common RL situations]. Oh, sure, people can spend endless hours clicking on pose balls, but, even in spite of that, there is far more communication going around. In fact, as many sexual workers in SL have reported, it’s not about the way you look (because everybody can look sexy in SL), but the way you talk – or write.” That’s my point of departure here: SL, as it is today, stimulates us to interact with its environment and with other people – but, especially when it comes to one’s contacts with other residents, it requires a great deal of strategies for developing narratives and providing rich descriptions of our actions and feelings. 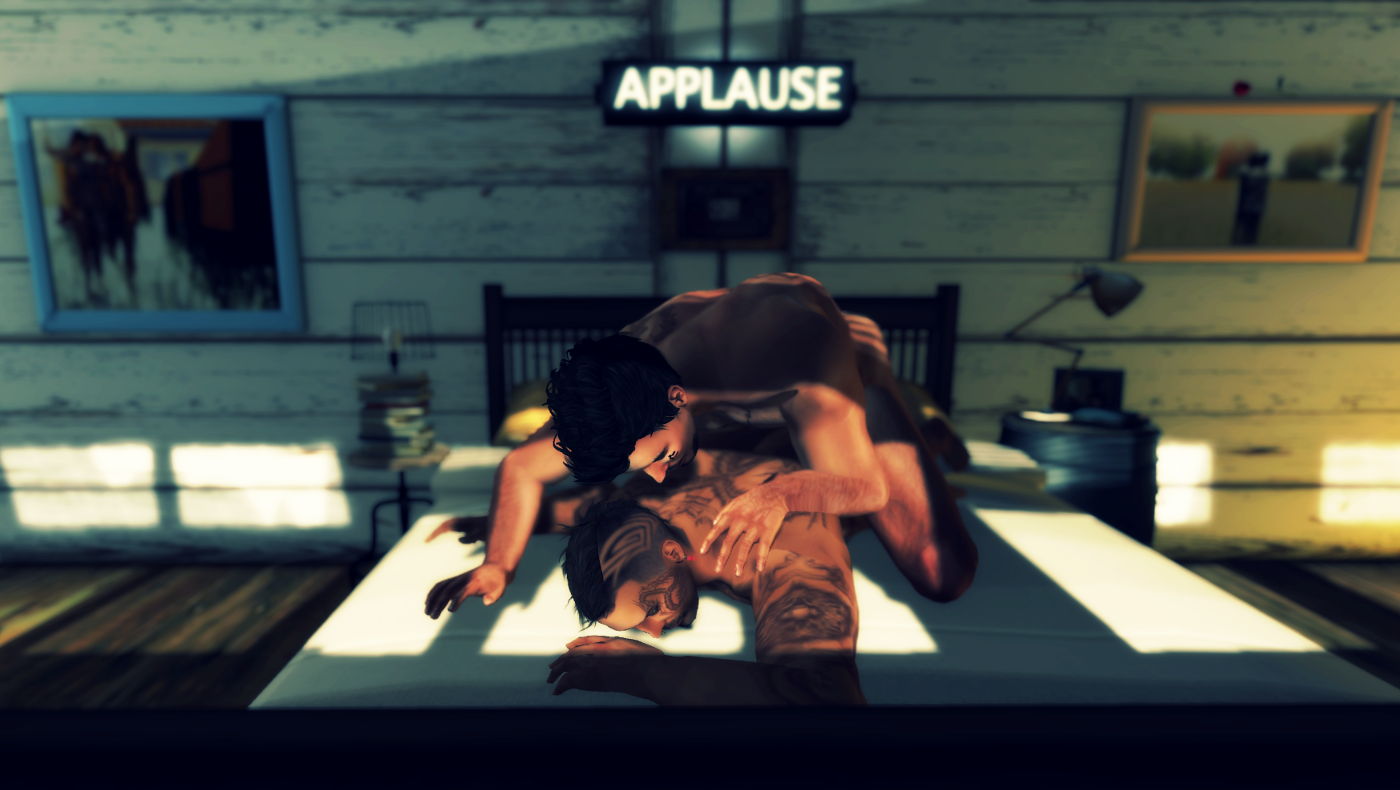 “Applause (or Things we do at home 3)”, featuring Randy Firebrand and Ricco Saenz

In the atomic world, part of our interaction is certainly wordless. I’m not referring only to that kind of “body language” that accompanies what we say: the way we turn our head while we speak, the expression on our face, etc. I also mean our rich silences in the presence of other people. To illustrate that, let’s say you go out with your boyfriend or your girlfriend on a Saturday evening. Imagine you go to the movies and, though you don’t say a word during the projection, you hold each other’s hands, share some popcorn and so on. Then you see him or her home, he or she invites you to spend the night and you have a romantic time during which not much has to be said, for you can touch each other, admire one another, look in the eyes… and then you wake up together the following morning, feeling that intimacy of having shared the same bed. Sounds good? 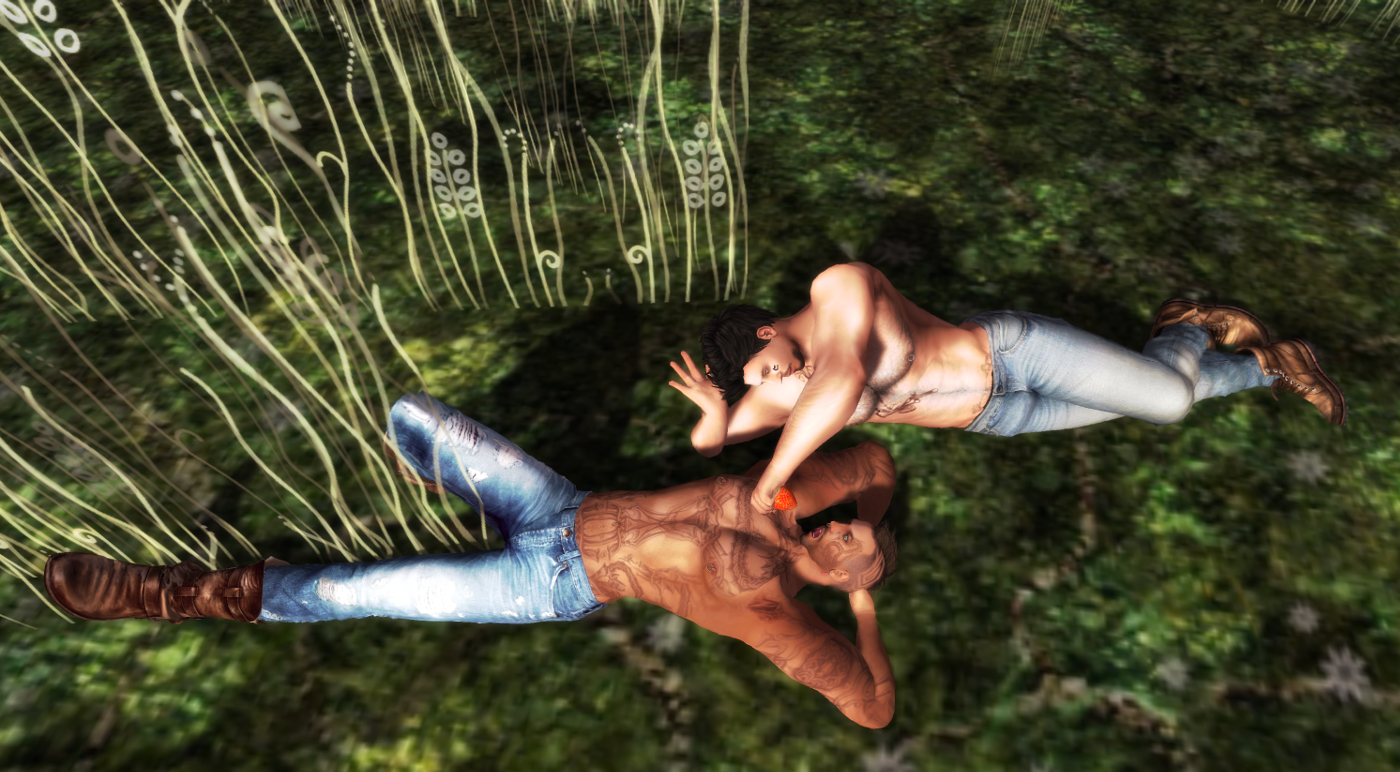 “Things we do in our garden”, featuring Randy Firebrand and Ricco Saenz 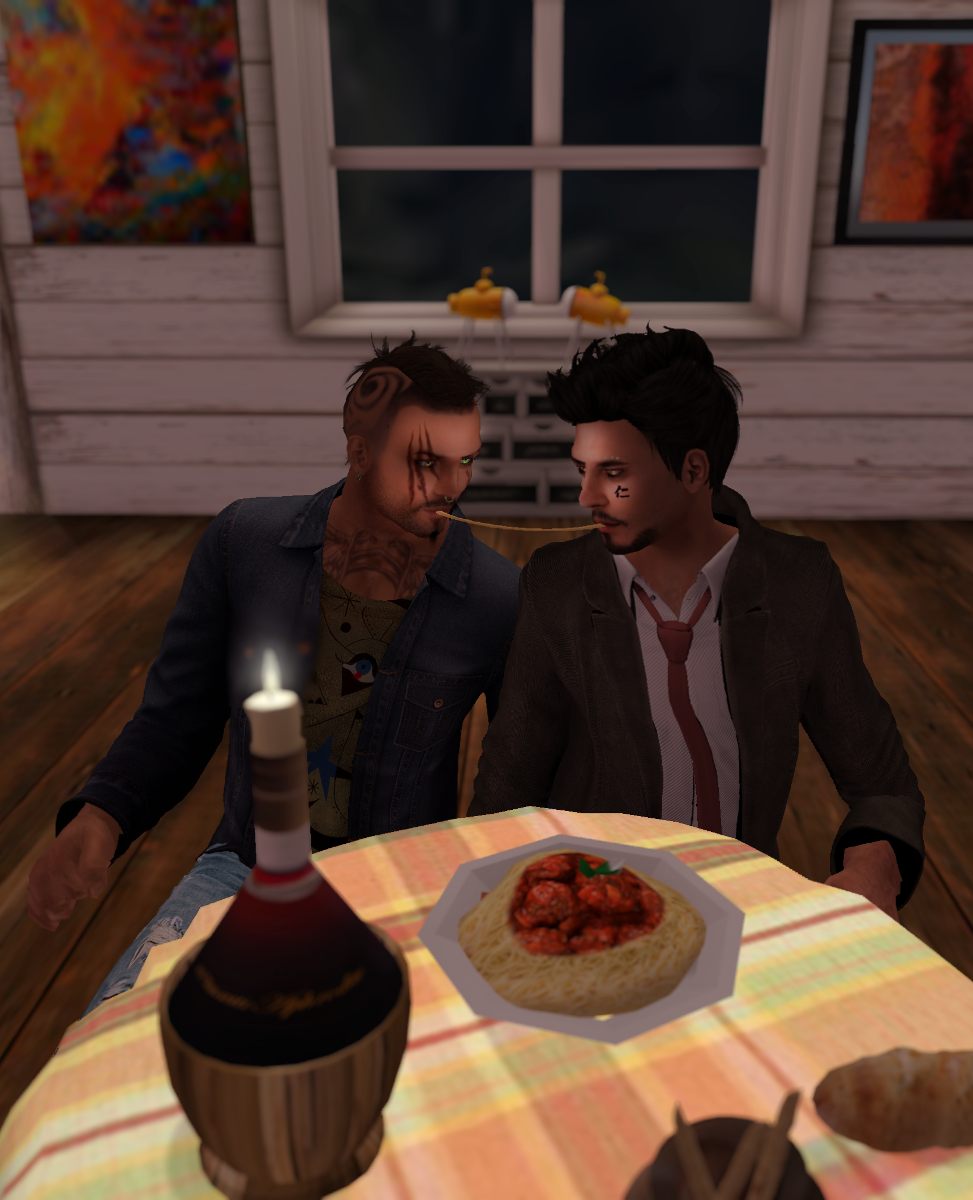 Now, imagine that same situation in Second Life. The two avatars go to a virtual movie theatre, choose a holding hand pose, rez some popcorn and keep watching the movie… for about two hours. Without speaking to each other. Then your avatar teleports with the other one to their virtual house or apartment. You both go to bed and choose an anim routine that automatically passes from cuddling to kissing and from kissing to sex. You don’t talk much, just keep watching the evolving animation. At some point, you people – not your avatars, you, yourselves – get bored and fall asleep sitting at your computers. The following day you wake up with a big pain on your back for having spent the night like that and regret the whole date. 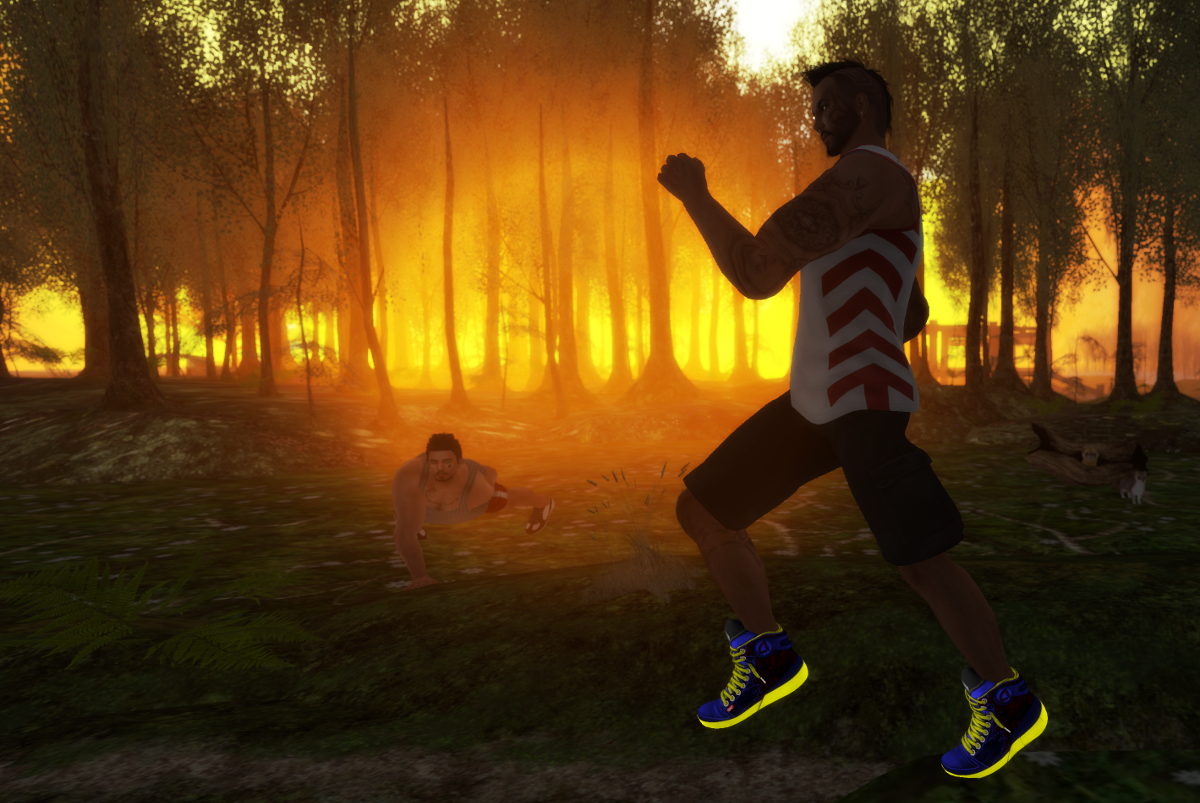 “Working out early in the morning”, featuring Randy Firebrand and Ricco Saenz 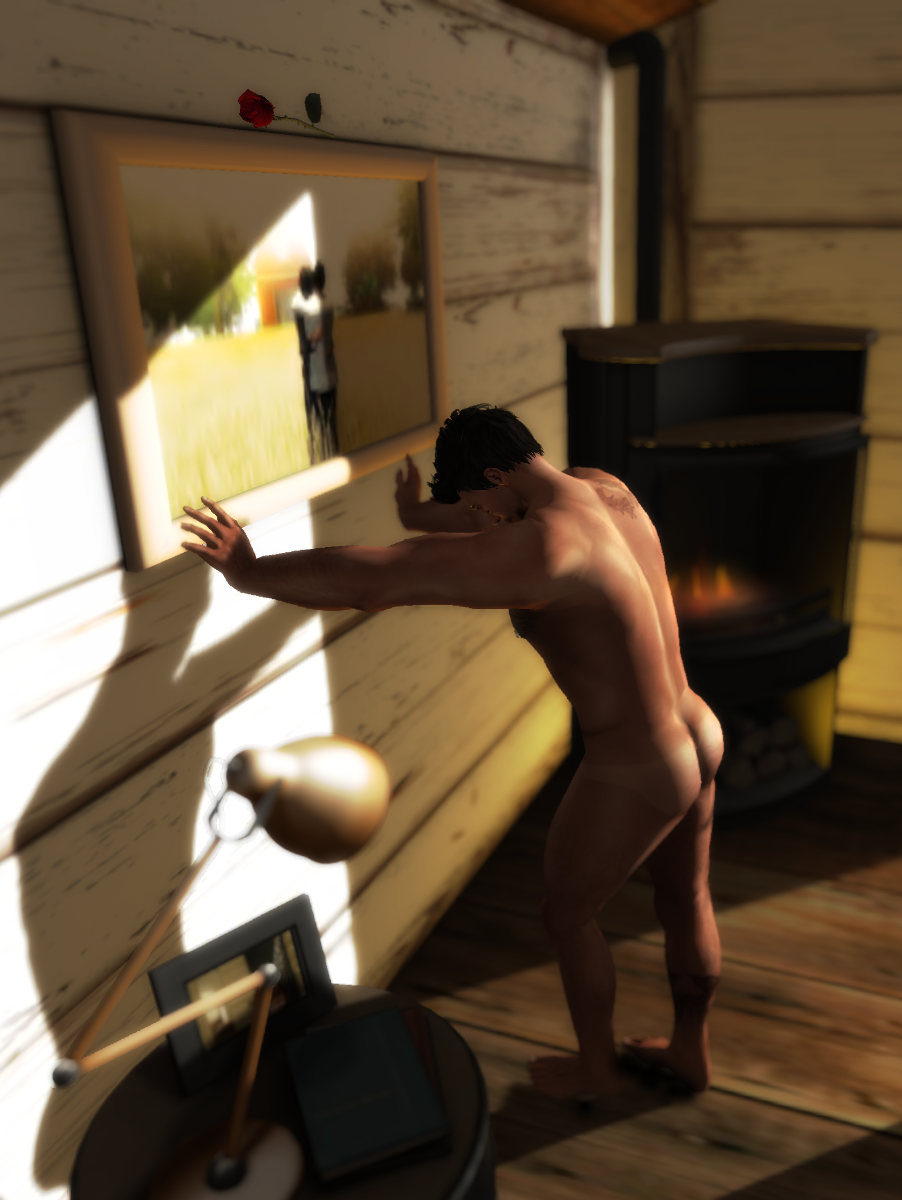 “When you are not there”, featuring Ricco Saenz

Comparing both situations, silences in the first example are full of interactions, giving space to non-verbal communication. In the second example, it’s quite the opposite: silences are a ticket to loneliness. Even being visual, SL requires words. One has to describe how they feel, what they are doing: “/me looks into your eyes and smiles”, one writes, “/me realizes his heart is beating fast, holds you tight and feels your warmth”, reacts the other one. In that sense, it’s not different from some earlier technologies, such as love letters in which lovers described to each other what they feel, or like IRC, which you could use to entail an academic debate on politics or economics but also to have more intimate conversations. Unlike love letters, though, Second Life is more interactive, answers come more immediately and, unlike IRC, that interaction is accompanied by images. 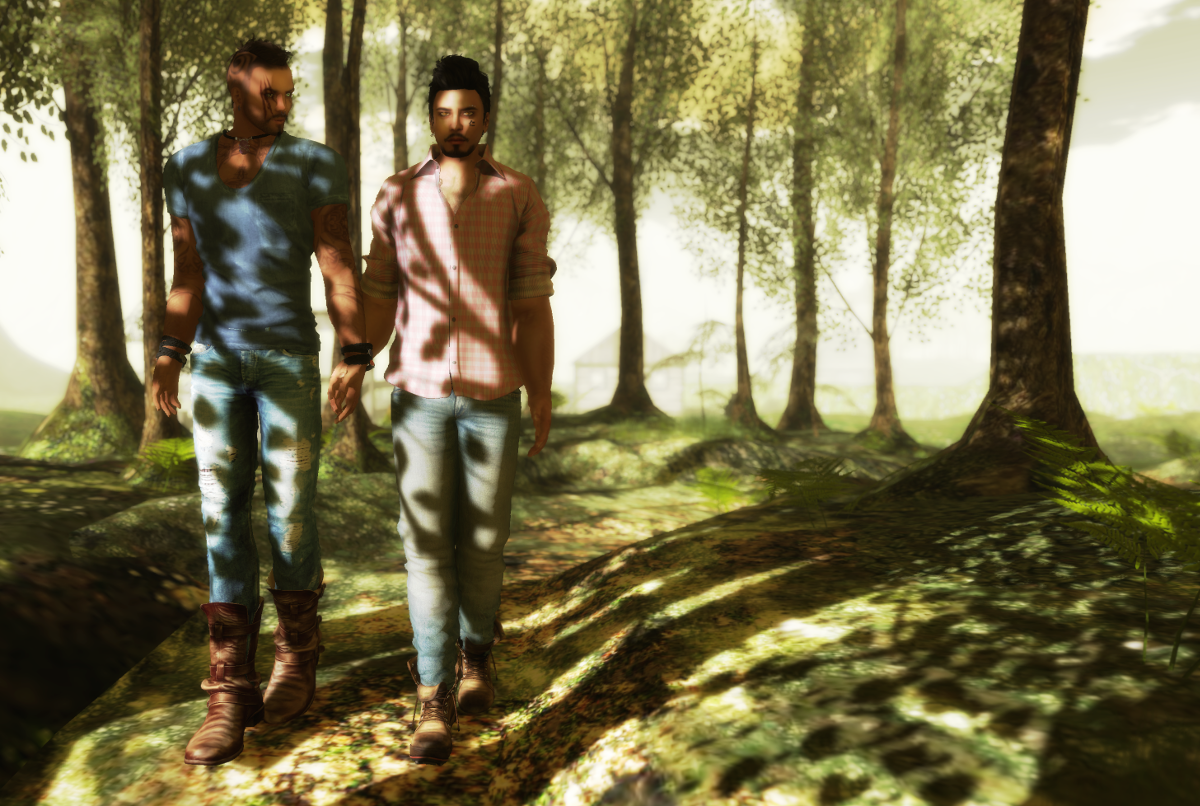 “In the woods”, featuring Randy Firebrand and Ricco Saenz

The visual side of SL feeds the desire for wordy interactions. One can see their avatar holding another avatar, but they cannot physically feel it. As an alternative, one has to imagine how it feels like and then has to describe it to the other person. In other words, images are an incentive to produce more words, a stimulus to verbally communicate with others. Maybe, when massively adopted virtual worlds incorporate systems that allow us to actually feel on our skin a virtual touch, that scenario will change, but right now, what we have is a collection of visual encouragements leading to more verbal interconnection. 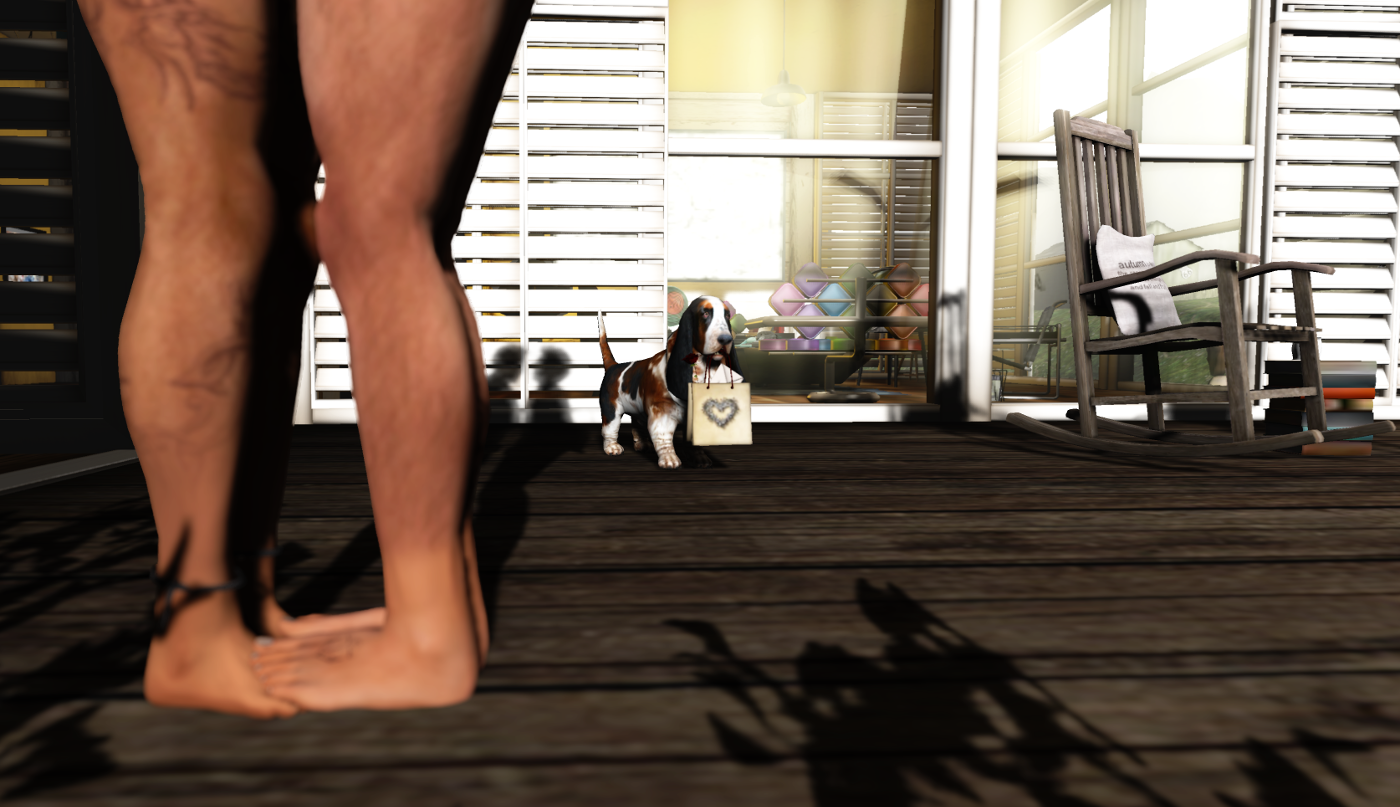 That’s why in SL people call so much attention for their ability to verbally communicate. As Gwyneth Llewelyn notes, “if you’re not gorgeous-looking in RL, and have few interests in ‘going out and do things’, but are a good writer, you’re suddenly a SL sex symbol. That can be very addictive for sure.” And that can also explain why others, who don’t have such an ability or patience to write don’t like SL that much. But how about those who prefer to voice? Well, the change here is not substantial. The point is that, either actually writing or voicing, if you want to engage in a more intimate interaction, you have to describe what you are imagining or feeling, you can’t just let your eyes speak for you. 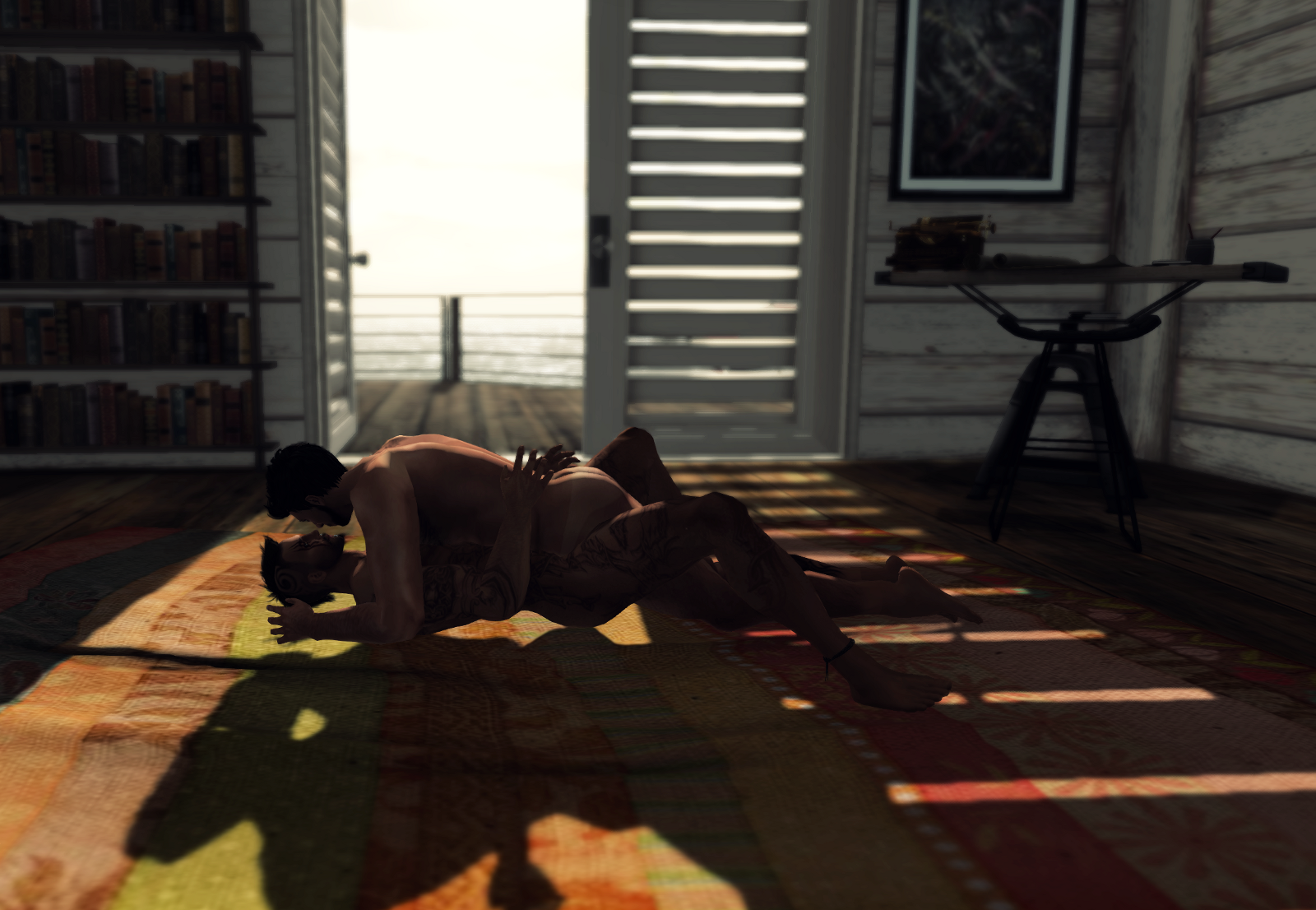 “The sun comes shining through (or Things we do at home 2)”, featuring Randy Firebrand and Ricco Saenz

Love and lust in Second Life are, then, verbose narratives. They are stories made of words, explicitly made of words. Thus, radically, in SL we are the writers of our destinies – not because we have them in our hands, but because we actually have to verbally produce our movements, our ways. We actually trace our trajectories in collaboration with other people, our partners, our dates, our beloved ones, and also our friends, our SL relatives and so on, but we do trace them as some kind of literature: the literature of our thoughts, of our feelings, our personal literature. 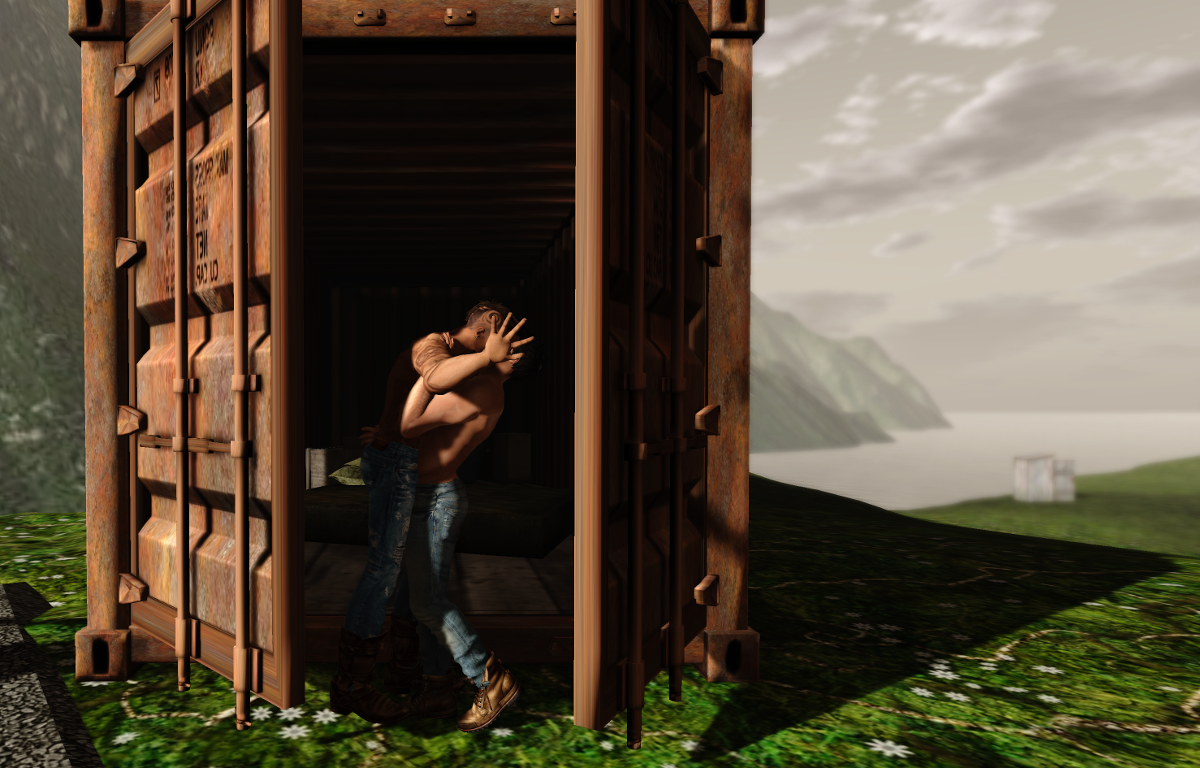 “Give us some privacy!”, featuring Randy Firebrand and Ricco Saenz

8 thoughts on “In SL, we write our lives”