Randy contemplates Svarga in the early morning (by Randy)

Many have written about Svarga – that’s just fair, for it’s a milestone sim in Second Life: it has been there since 2006 and has been saved by Linden Lab itself from disappearing. If you’d like to learn more about the history of Svarga, I strongly recommend a post written by Inara Pey back in 2012. As for this current post of mine, I’ll tell you a bit about the place, of course, but I’ll allow myself to take advantage from my visit to Svarga with my husband, Randy, to reflect on some aspects of our collective memories in a virtual world. 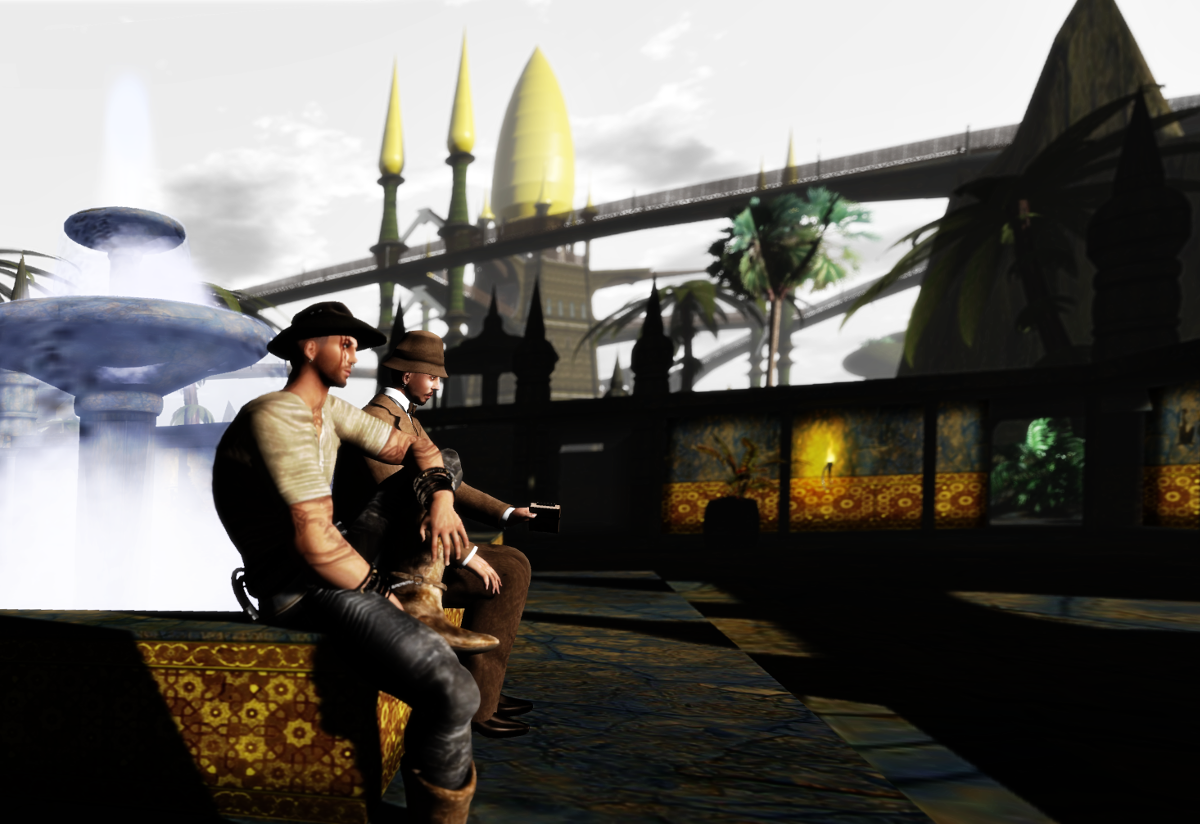 Randy and Ricco at Svarga’s Temple (by Ricco)

Randy leads the way (by Randy) 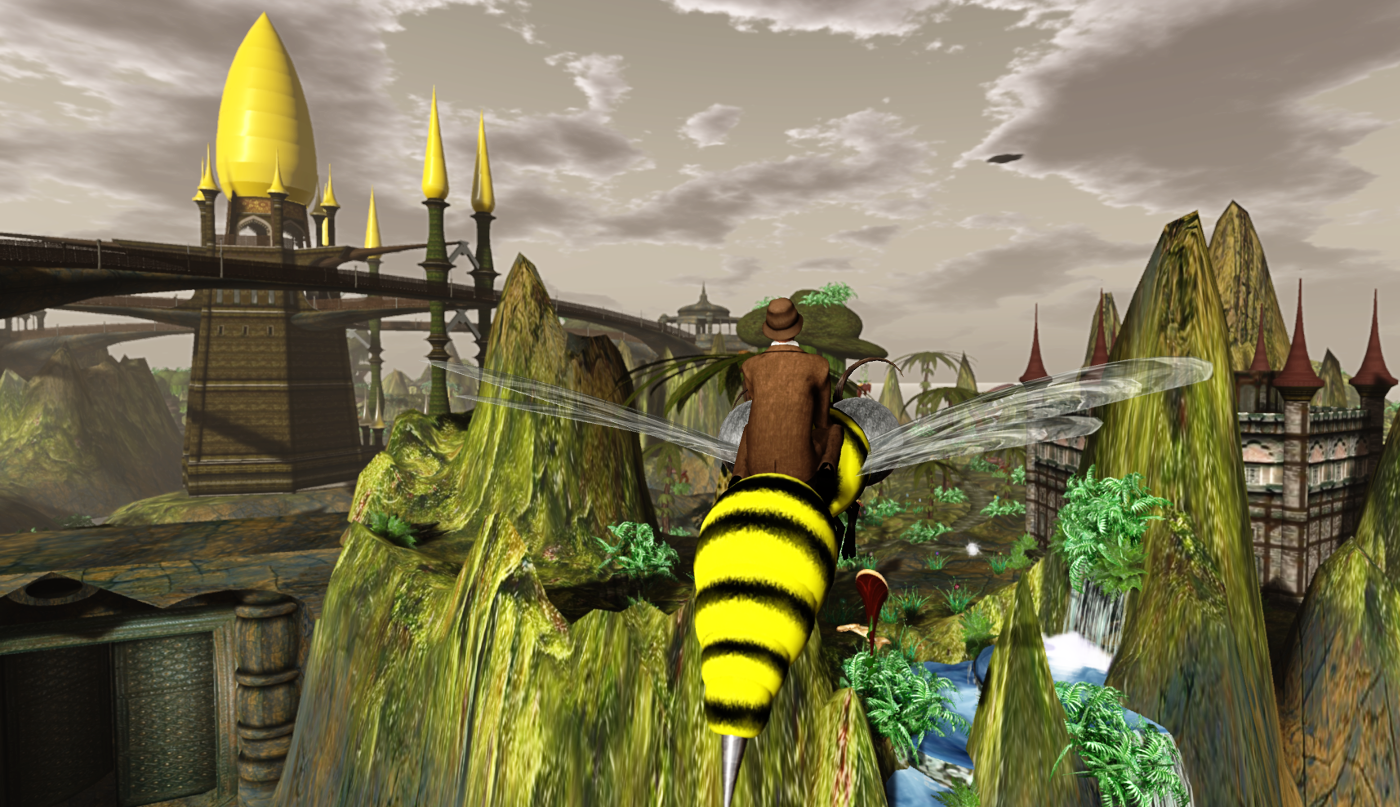 Ricco follows on a wasp (by Ricco)

My point of departure is a comment by Randy, when we arrived together at Svarga: he observed that the sim was like a living museum – and a very impressive one! Indeed, it was conceived even before flexi prims existed, and though it has changed a bit after LL rescued it, the Lab kept its spirit and didn’t add any post-2006 innovation. So, everything that one sees at Svarga is made of old, traditional Second Life primitives or particle emitters (this is the case, for instance, of the pre-flexi-prim era flags, built as particles in order to give the impression that they are waving at the wind) to which scripts were applied in some cases. And it’s astonishing to see what one could do back then in SL, even for the standards we have today, with mesh buildings and other resources.

Large flower, spores burst: all prims and particles (by Randy)

It is mentioned in many places – as, for instance, on this post in New World Notes – that SL’s creator, Philip Rosedale, considered that Svarga was more or less what he thought that Second Life would be when he conceived it. He once said in an interview for In The Grid: “We used to imagine that SL, or parts of it, could become vast forests, full of little evolving plants made of code, and you could wander in that forest and find things that no one else had ever seen. What a thought! Builds like Svarga are going exactly in that direction now. I can’t wait to be able to walk in those forests.” 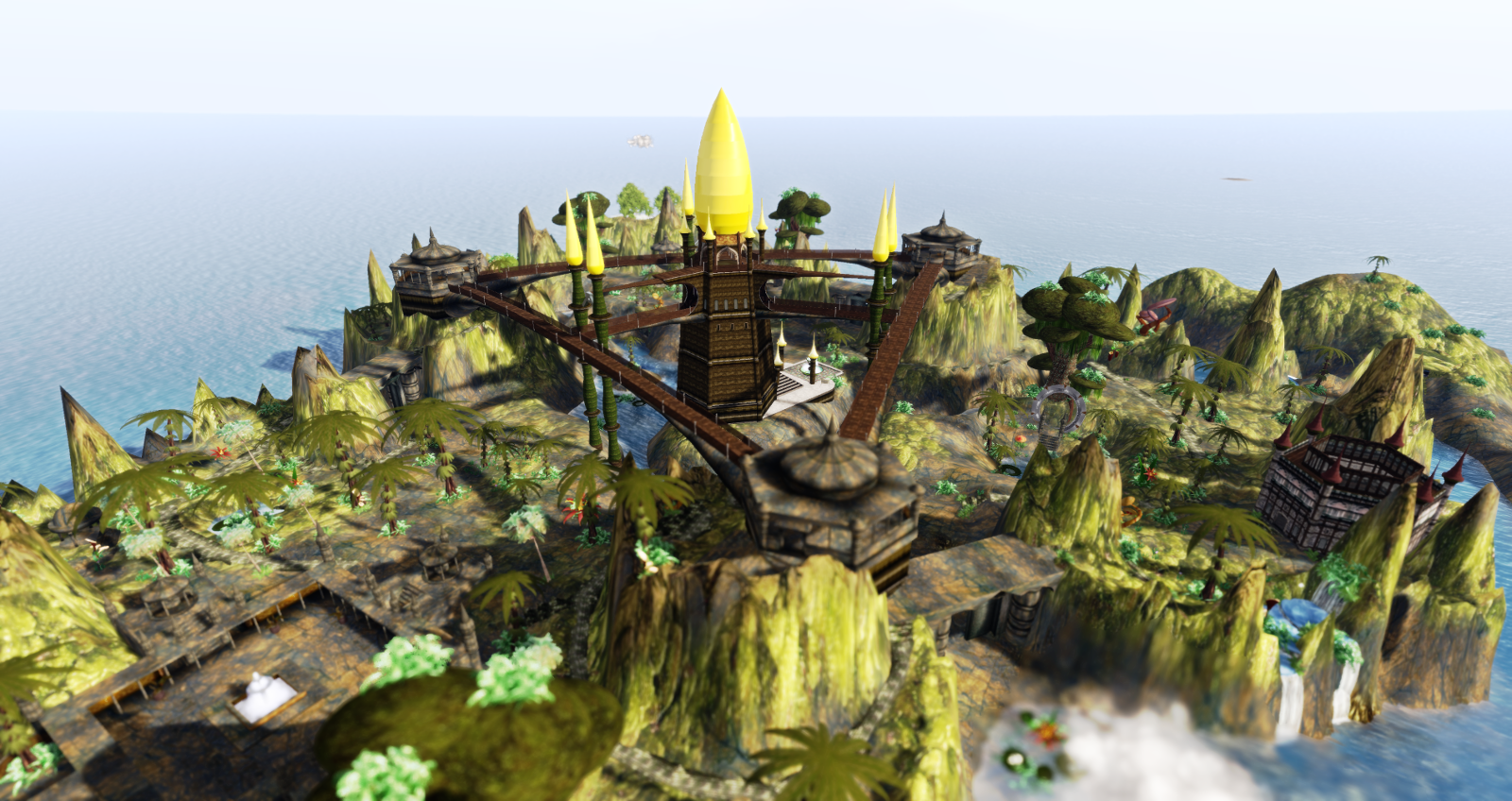 Svarga from above (by Ricco) 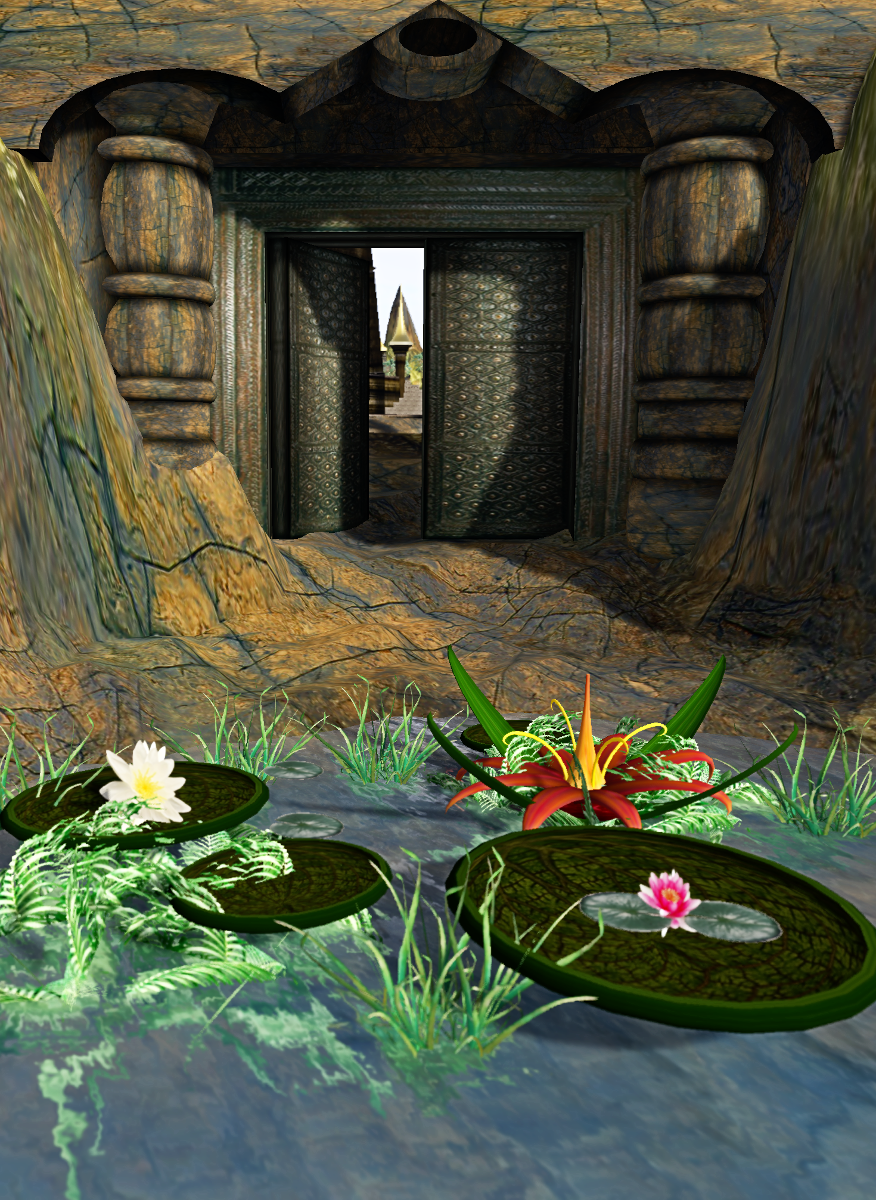 Maybe that helps us understand why Linden Lab bought the sim from its creator, Laukosargas Svarog. On another New World Notes‘ post, Peter Linden explained LL’s decision like this: “Linden Lab purchased Svarga for much the same reason as we recently announced the Linden Endowment for the Arts: to provide a way for this high-quality experience to live on in the ever-changing world of Second Life.” Certainly, that move contributed to making Svarga a lieu de mémoire, a site of memory, as described by the French historian Pierre Nora. On Nora’s definition, sites of memory are “all significant units, either material or ideal, from which men’s will or the effect of time has created a symbolic element of a community’s memorial patrimony.” (NORA, Comment écrire l’histoire de France, in NORA (ed.), Les lieux de mémoire, v. 2, my translation). 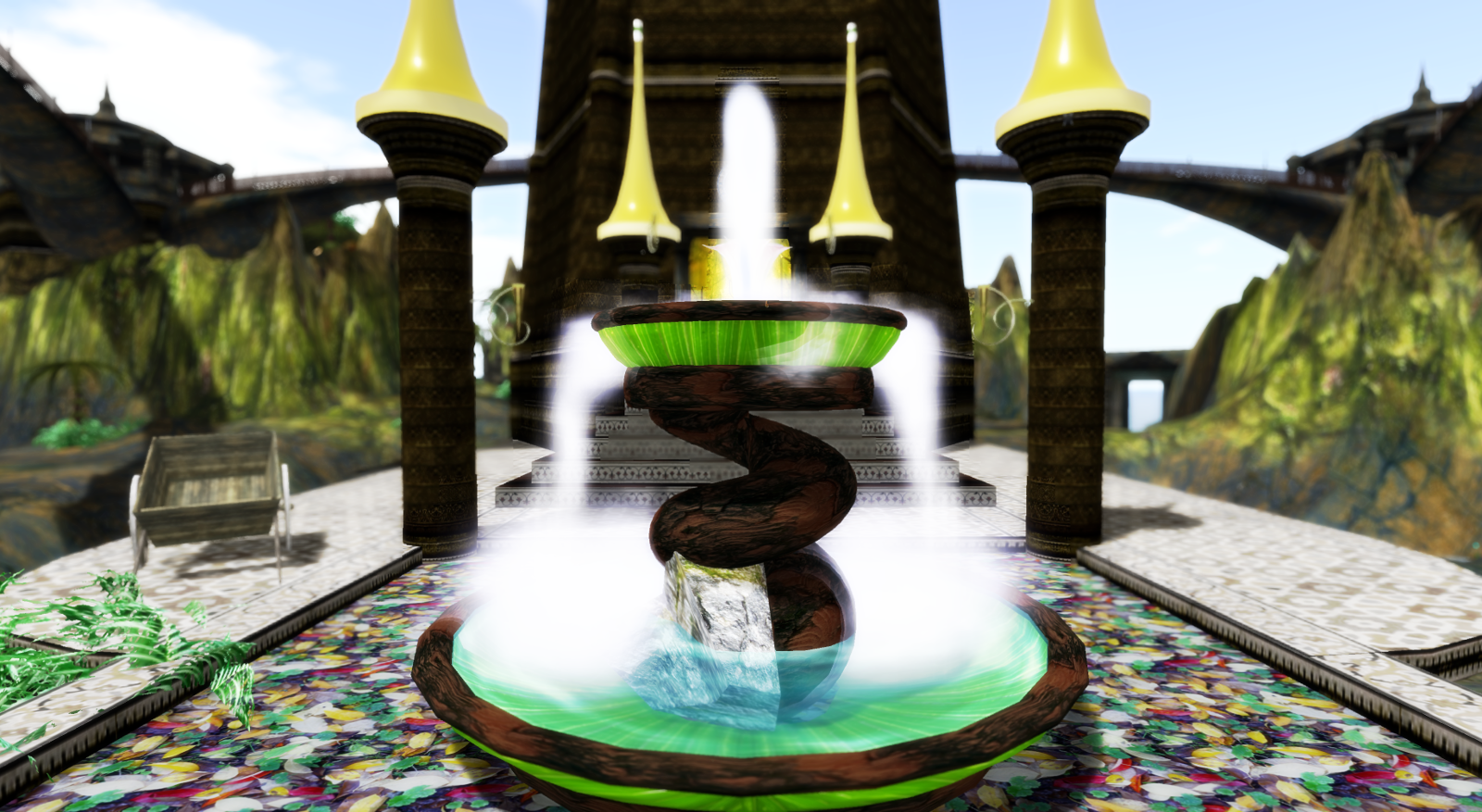 A fountain at Svarga (by Ricco) 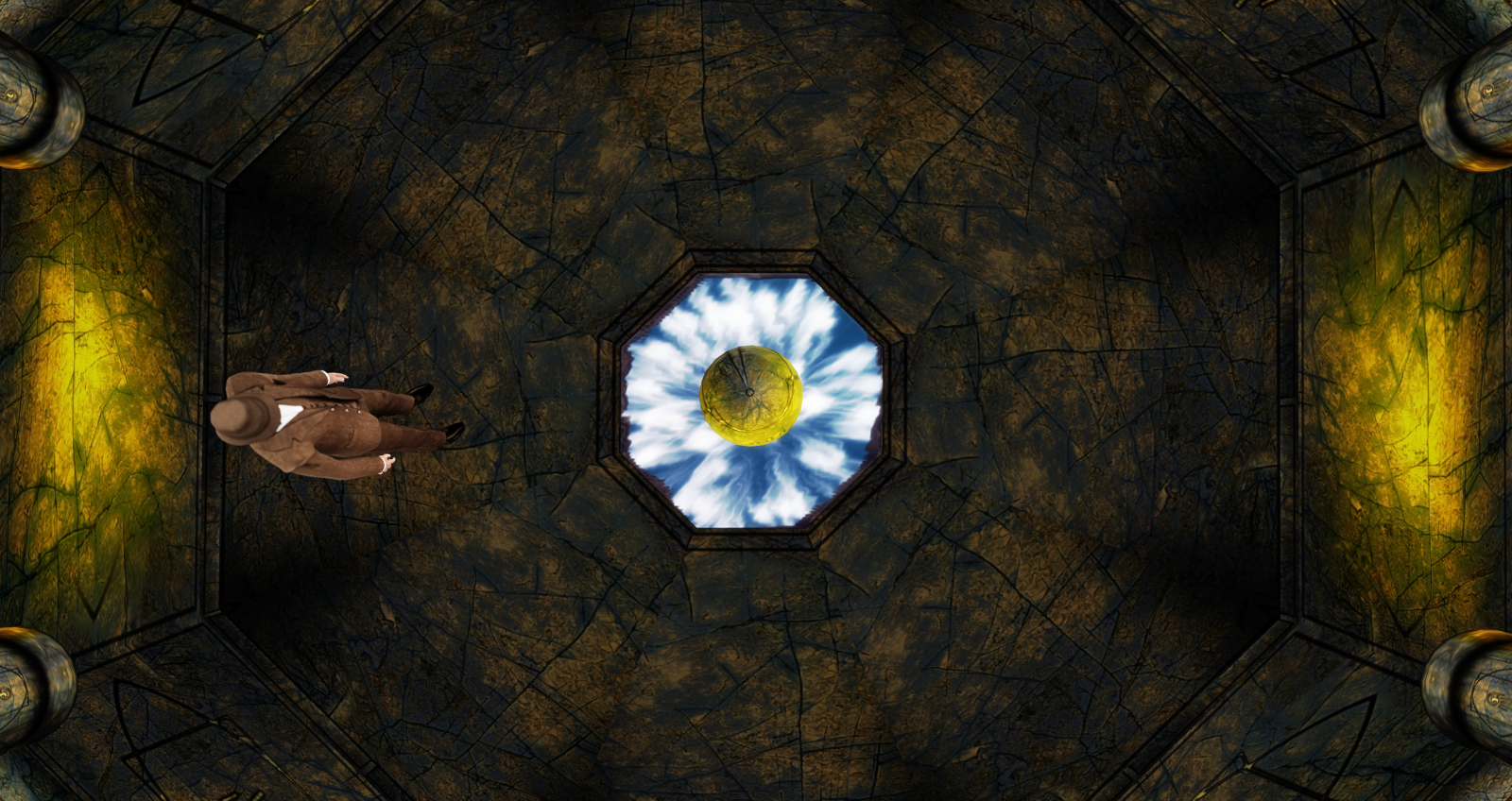 Ricco and the Oracle of Singularity (by Ricco)

As one can see, Svarga became one of those places that help us tell Second Life’s history – and to do so in a certain way. As Randy pointed out, it’s a museum that shows the wonders that one could build in SL only using primitives, particles and scripts. Or that translates, to a certain extent, what Philip Rosedale had envisioned for Linden Lab’s virtual world. Like that, Svarga became preserved, as did some other sites of memory in Second Life: Da Boom, The Man, Arch’D Linden Grande, The Ivory Tower and the traditional celebration of Burning Life or Burn2, for instance.

A flower (by Ricco) 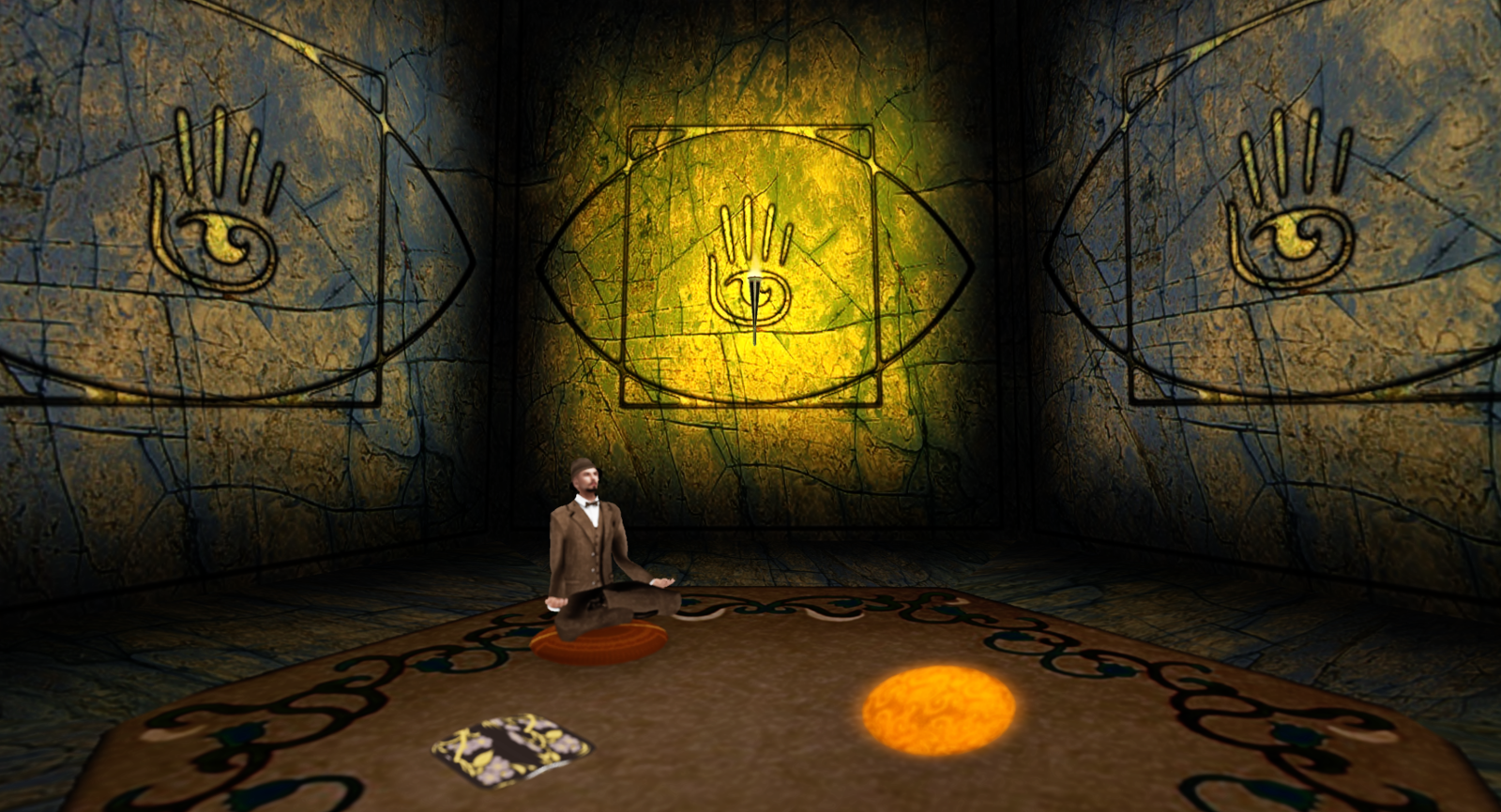 Certainly, SL has been much more than that, but no one thought of saving old escort service clubs or the infamous ad farms from disappearing. Many amazingly beautiful or entertaining sims are gone now and new residents will never be able to experience them. The dynamics of preserving some places, objects, buildings or events and discarding others in SL follow a parallel path to the process of building its history and the collective memory around it. It is understandable that Linden Lab and the residents of Second Life want it to be remembered as a place of creativity, of virtues (instead of vices), vibrant happiness, celebration… 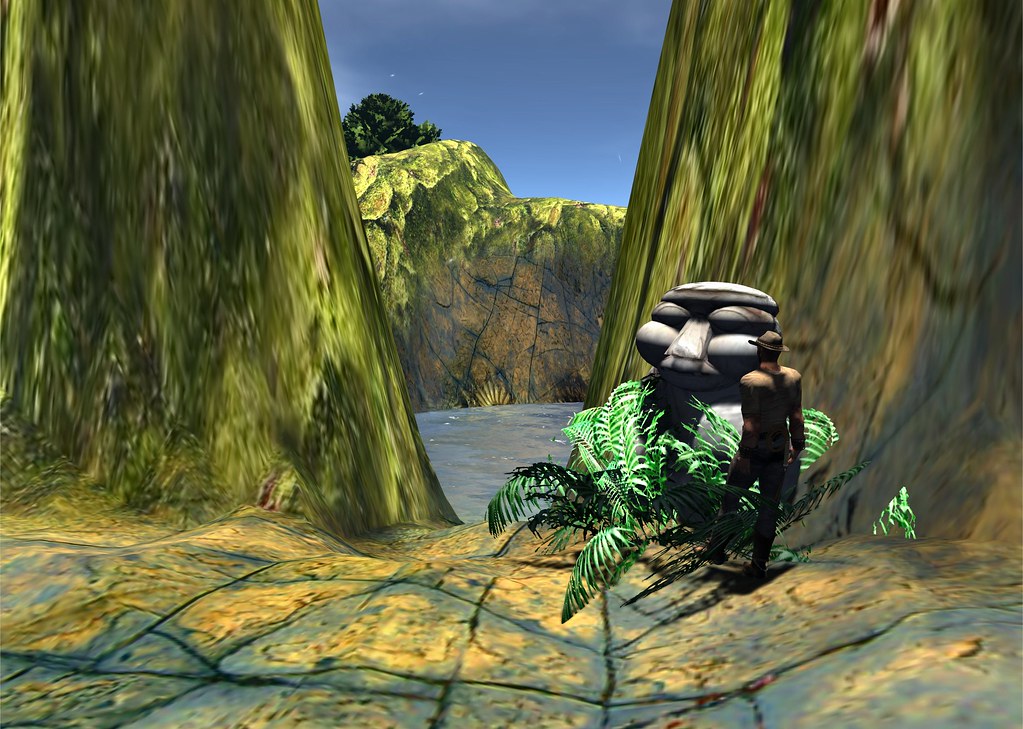 Randy and the Ancient (by Randy)

Of course, power crosses the decision regarding what to preserve and what to discard. Linden Lab, itself, plays an important role there – and Svarga is an example of how the Lab can operate. Some individuals can help influence that process, such as Veritas Raymaker did when he chose to rescue some sims and buildings in SL (like The Western Front – 1917 – Training Camp 1, at Frideswide or The Crooked House, among other items). Others cannot do it by themselves, but their communities can – and create events such as Second Pride, that tries to introduce a certain LGBT representation (which is also object of internal disputes) into Second Life’s history. Of course, there are cases, many cases, in which sims, buildings or events will just fade away.

Randy at the door for Svarga’s Library (by Randy)

Sunrise at Svarga’s landing point and tour station (by Randy) 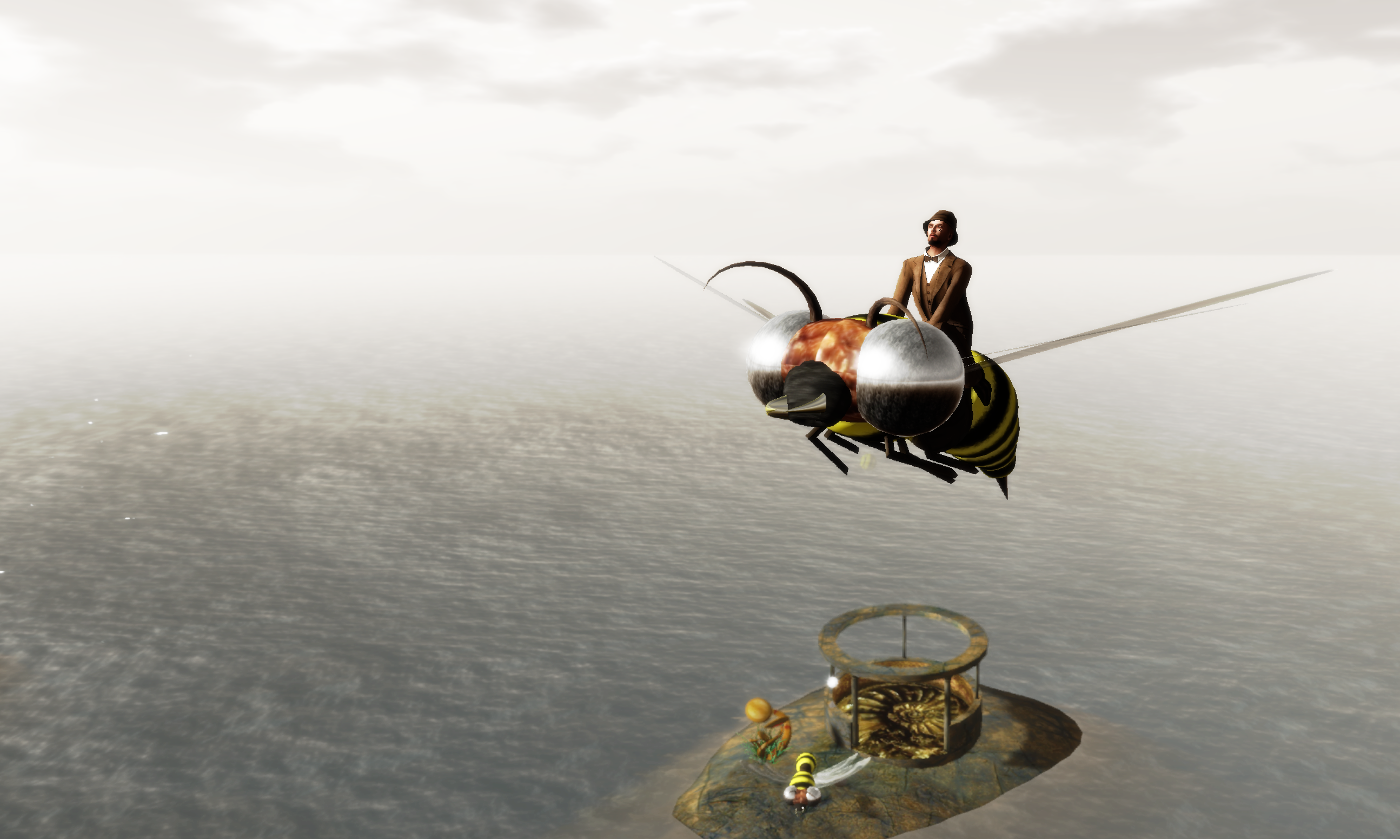 Ricco rides a wasp (by Ricco)

I could name many items that I would like to see preserved. I understand though that it’s neither possible nor practical, and maybe not even desirable, to save each and every sim or building. The politics of memory – and the unbalance of power of individuals and groups to exert it – is unavoidable. Still, I am proud of being part of a virtual world that can give a home to a place like Svarga. It shows how SL’s residents have been creative since the earlier days of Second Life. “Give them the tools and they will build it.” Oh, they will. And that’s what I feel when I climb on a wasp and take the sim tour at Svarga, when I explore it on foot, searching for its secrets, its hidden surprises, observing the eco-system simulated there. In many ways, history helps shaping the world in which we live and what we’ll do with it – and the memory that Svarga entails points to a world of amazing possibilities. In this sense, it’s not only a document about the past, but also a statement on the present and the future that we can build.

Svarga at sunset (by Randy)

7 thoughts on “Svarga: how to forge memory from prims”