“In a corner formed by two houses, one of which projected farther out into the street than the other, she sat down and drew up her little feet under her. She was getting colder and colder, but did not dare to go home, for she had sold no matches, nor earned a single cent, and her father would surely beat her. Besides, it was cold at home, for they had nothing over them but a roof through which the wind whistled even though the biggest cracks had been stuffed with straw and rags. Her hands were almost dead with cold. Oh, how much one little match might warm her! If she could only take one from the box and rub it against the wall and warm her hands.” (Hans Christian Andersen, The Little Match Girl, translation by Jean Hersholt) 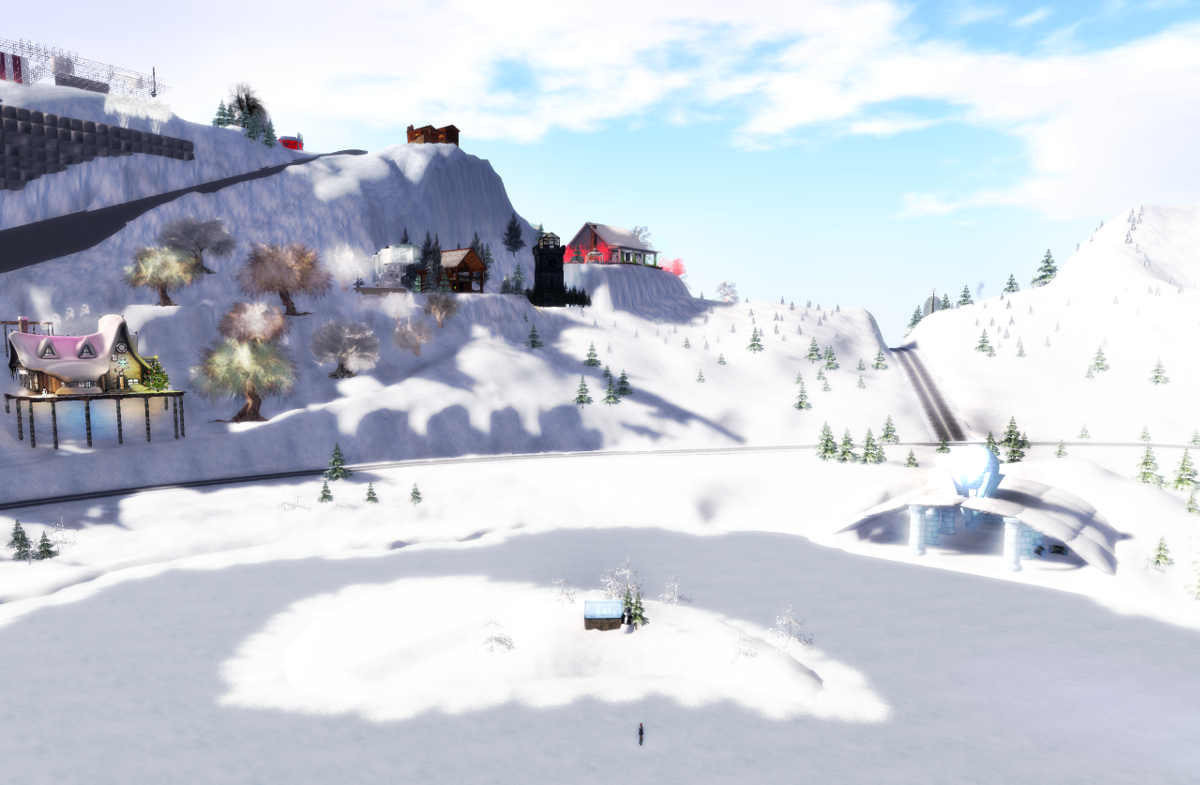 From time to time, I like to go back to some Second Life classic: the very first region, some representative building or sim in SL’s history and so on. Winter season 2014-2015 – it’s winter in the Northern Hemisphere, where most residents live in real life – inspired me to do it again and visit Mainland (and for those who are looking for adventures in Mainland, I recommend checking Uccie Poultry’s blog). Actually, the winter that I visited now is permanent, it can be seen at any time of the year, though I hadn’t been there in quite a while: it’s Snowlands, part of Sansara, the oldest continent in Second Life. 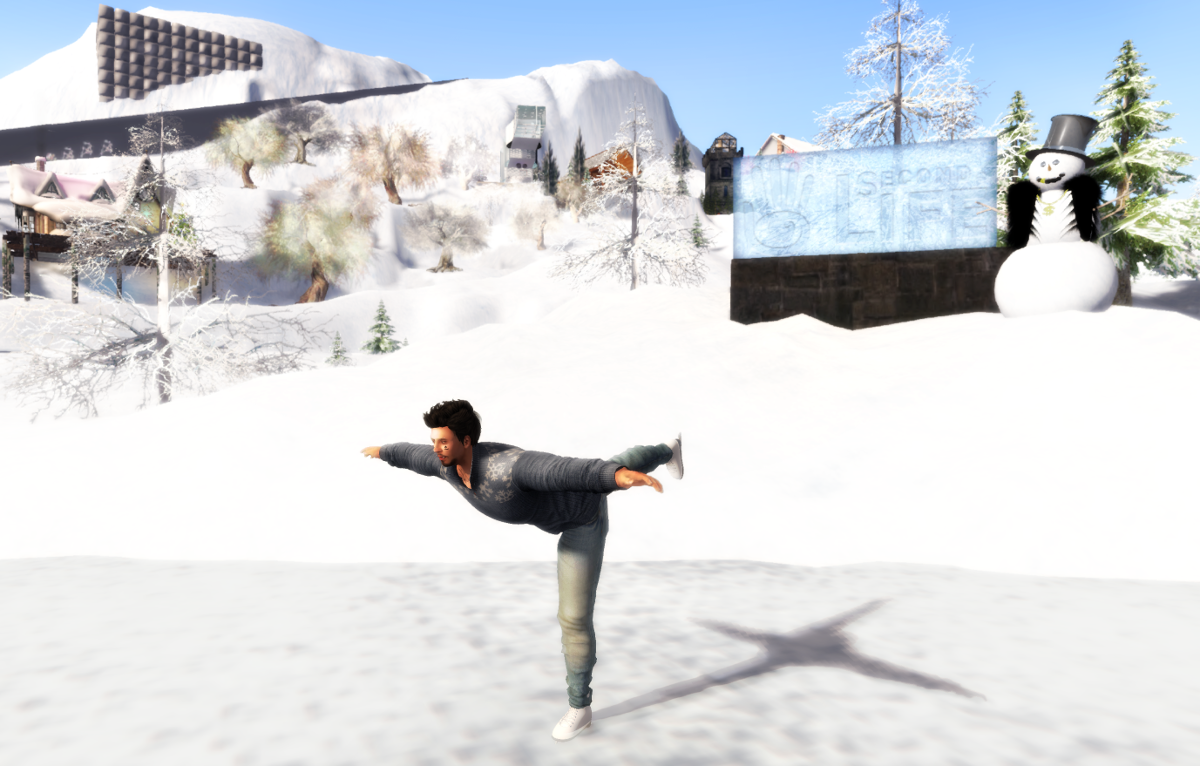 For sure Snowlands has many attractions, but soon after I arrived there, I found myself seduced by the idea of ice skating on the frozen surface of Lake Zermatt. I kept skating for a long time and enjoyed it so much! And such happiness brought me to this: actually, if you go to Flickr and check most SL residents’ photos for the season, you will see a great number of happy pics. Isn’t it significantly different from the common idea of winter as a sad time? 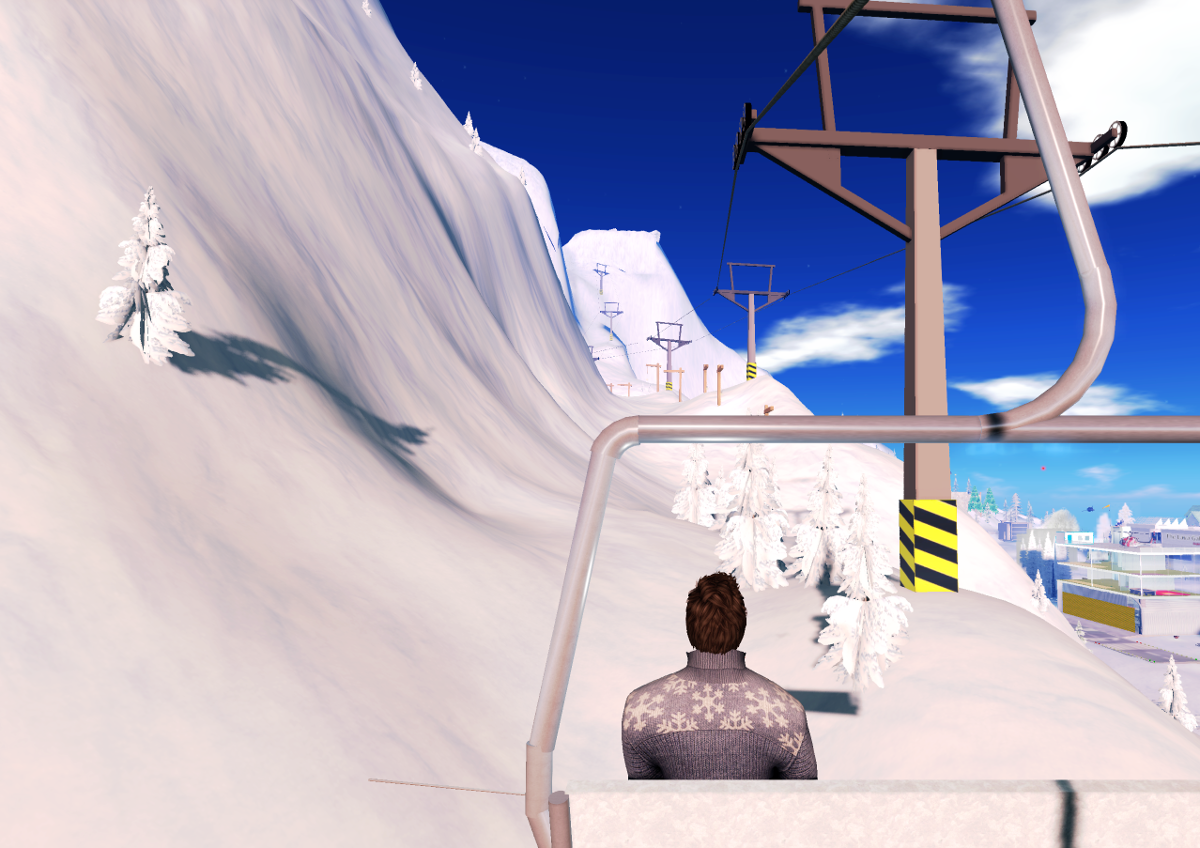 Ricco going up the hill at the ski station at Voss, near Lake Zermatt

First of all, the image of winter as a season of sadness – mainly because it’s cold and darker (for it has longer nights) – is just that: an image. It doesn’t have to correspond to reality. Second, there are happy images associated with winter, such as Christmas ones. Third, I’d risk to say that, to many of us, Second Life is a place to celebrate: we are there to feel good, to have a good time. Of course, there is drama too and, unfortunately, we have seen people leaving SL because of that. Anyway, it only stresses my point: those people were there to feel good, and they stopped logging in because they could not find what they wanted. 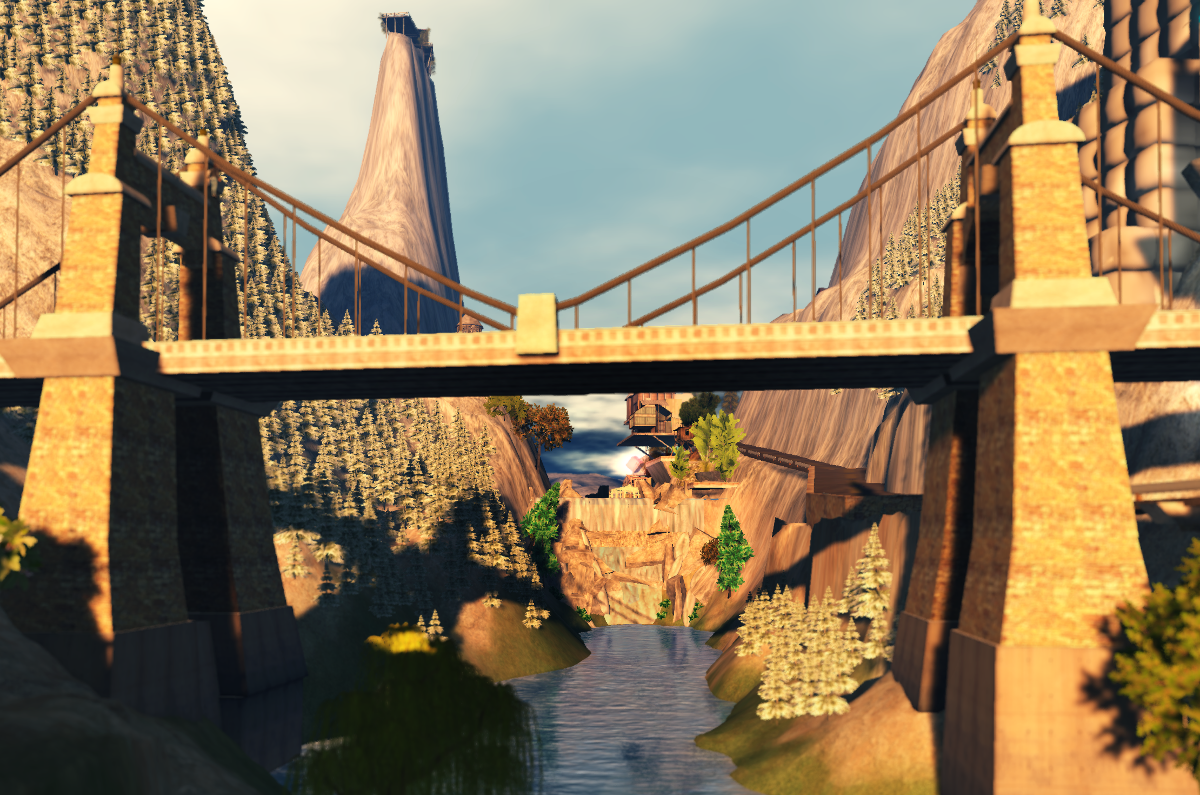 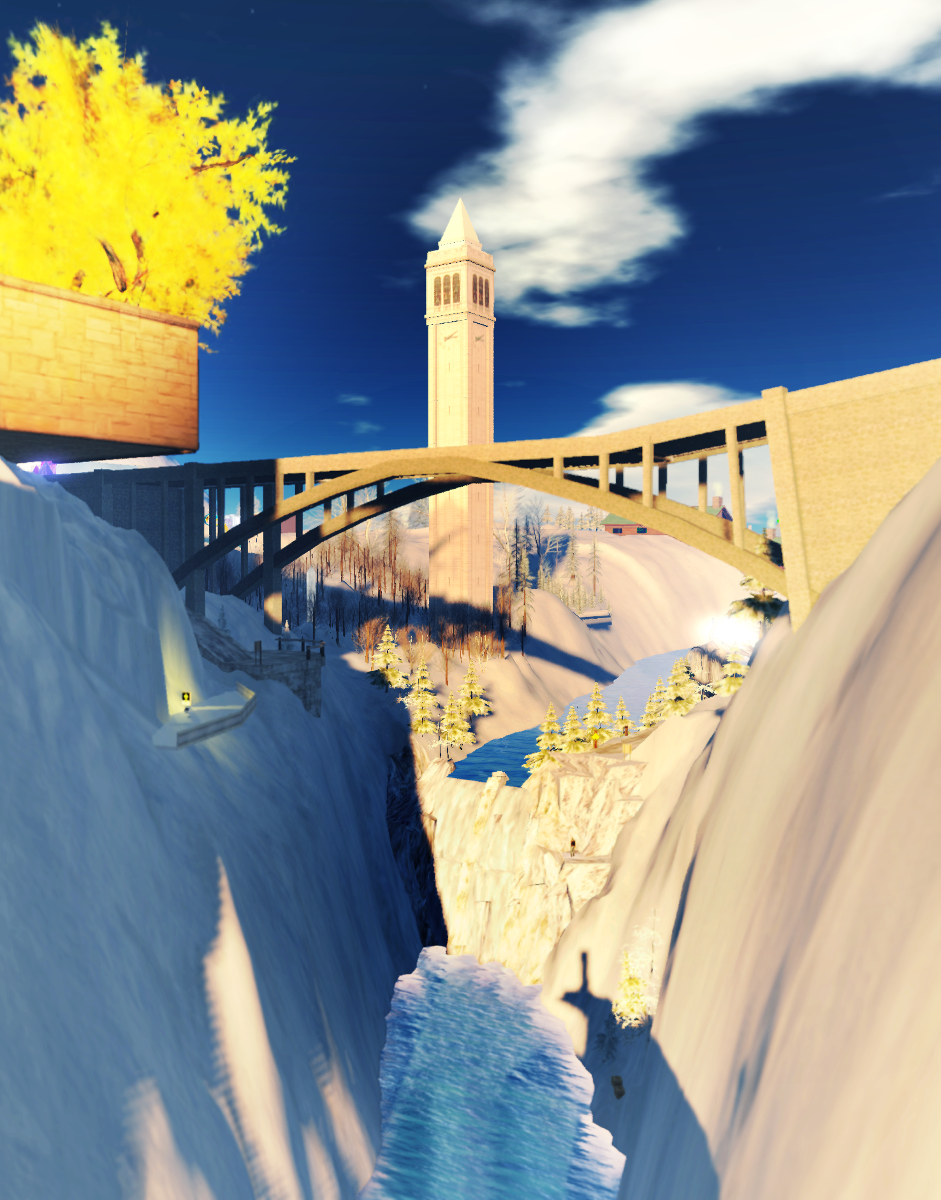 (At this point – and, obviously, this is not the only one – the difference from SL and the atomic world is pretty remarkable: one can leave SL and go do something else. Certainly, one can also leave their first life, but can they be sure that they can do something else if they choose that way?)

I’ll leave this reflection here – and invite my readers, again, to visit Zermatt and the surrounding sims (maybe you can find a Linden bear?). One may even keep exploring Snowlands, why not? As a curiosity let me add: it’s one of the places in Second Life where you can find water above sea level – not prim water, Linden water, as Zermatt and the river that feeds it. This is actually a common thing in Sansara, which has waterfalls – some in Snowlands (at Durango and at the very edge of the subcontinent, for instance) – and dams to compensate for different water levels. Maybe someday I should visit them all? 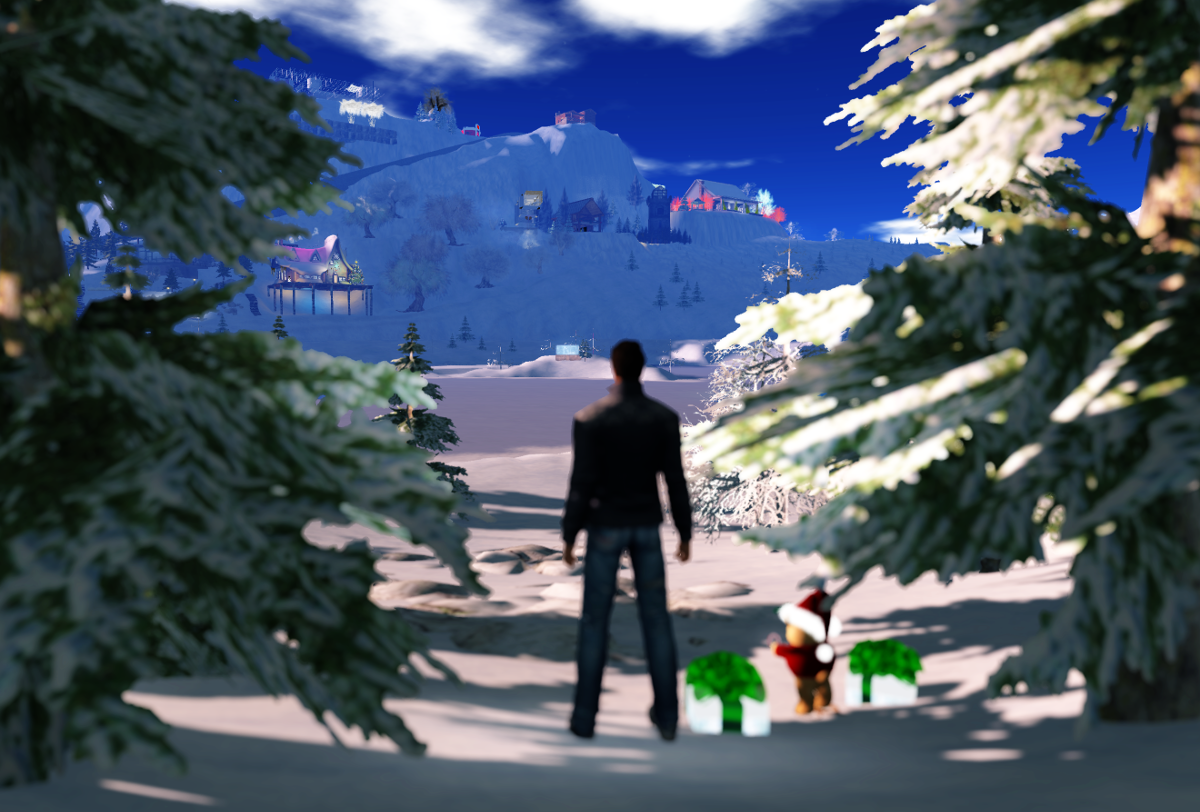 Ricco enjoys the view of Zermatt near a Linden bear

3 thoughts on “Who said winter has to be sad?”