“In every photograph there is a phantasmagoric element.” (CARVALHO, Bernardo. Nine Nights.)

A number of places in Second Life are built to be photographed – and they tend to look really beautiful. This is the case of Just Another Tequilla Sunrise, a “picturesque sim full of fall colors and secret hideaways” created by photographer Arol. Indeed, besides the wonderful composition of the sim’s landscaping, the colors used there make it particularly suitable for pictures. In other words, its autumn is very appealing to the visitors’ eyes. 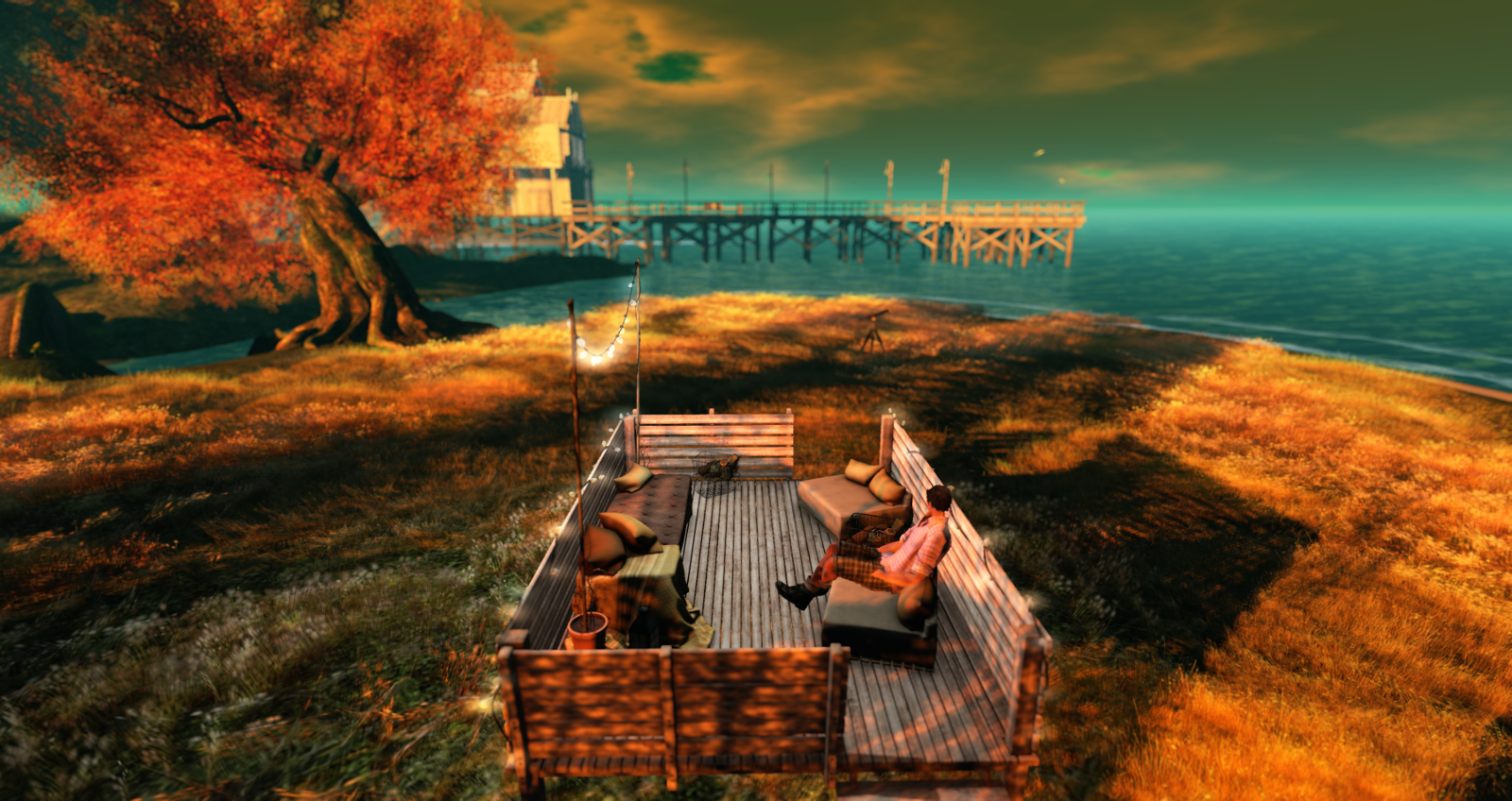 A bit after I first landed on Arol’s sim, it reminded me of a blog post that Honour McMillan published in 2012, when, as she wrote, it was brought to her attention that taking pics in Second Life should not be compared to “photography”. Honour didn’t agree with the term “screen capture” to describe what she does in SL when she points her camera to a certain scene or place in the virtual world, choosing a specific angle and adjusting all the settings that she can control before producing a still. On the comments to the post, Salazar Jack proposed a couple of neologisms that I do like: photongraphy and pixelography.

At that time, I suggested that such a discussion seemed more like a result of an over-zealousness towards photography, for it was already obvious that Honour’s pictures were computer captured ones. Now, inspired by Just Another Tequilla Sunrise, I’ll go further: it’s not my intention here to discuss if what we do in SL is actually photography or some other kind of image capture. I just don’t care, at least not for this post. What matters is that, to a great extent, what we do when we take our pics in SL is to deal with light – though a virtual one, delivered by an atmospheric rendering system known as WindLight. 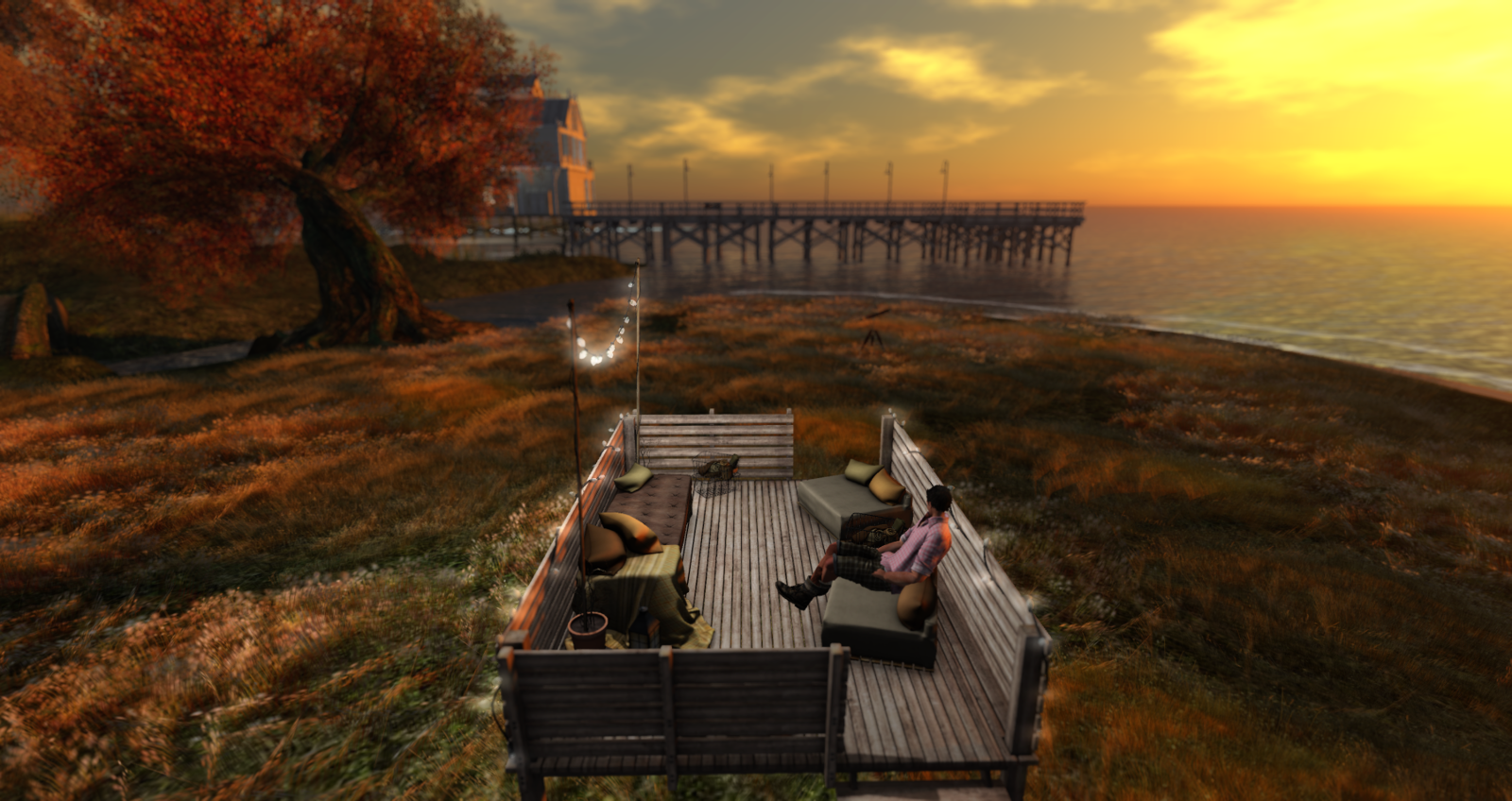 Of course, every image-capture process has to do with registering light. Nonetheless, WindLight allows us to interfere on a number of aspects that go far beyond some standard light emission used to scan a scene. It delivers enhanced skies, controls sun and moon position and intensity, affects scene gamma, draws clouds, creates or eliminates fog.

I don’t consider myself a professional SL photographer, and I’ve seen many people out there who take better pics than I do. Still, I shared on another post what I had learned about how to capture depth of field on pics taken in Second Life. I don’t intend to do the same with WindLight here, I don’t have any important technique to share about it, but I’ll allow myself to give three or four tips for those who are starting to take pics in SL. 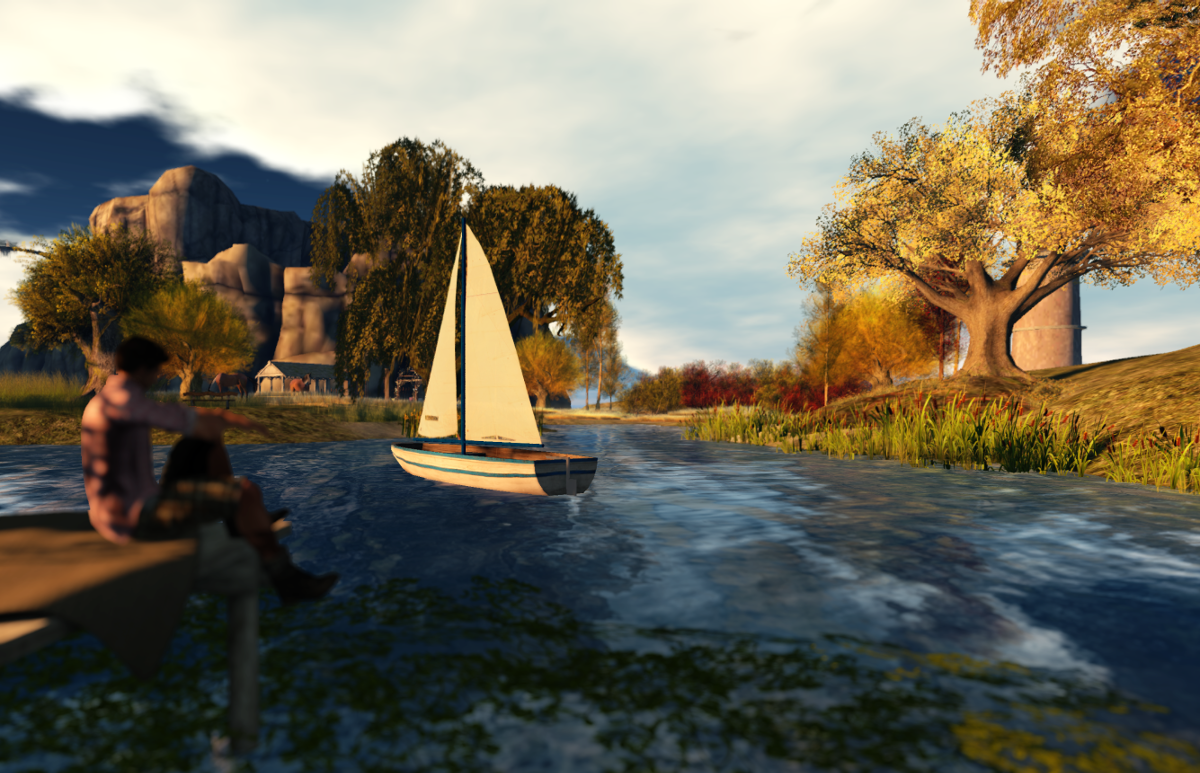 First of all, I’d say: get inspired by the place you are visiting. I’m not a purist. I don’t think that, if someone chose a certain WindLight setting to their sim, that’s the only preset that will work there. Some argue that the preset picked by the sim creator is part of their creation and I respect those who go with it. I, myself, think slightly differently: when a sim creator chooses a certain preset, they do it for the whole sim, for the ensemble of items displayed there. A particular picture, under a certain angle, may look better with a different group of settings. Still, it doesn’t mean that any preset will work at each and every place.

Take Just Another Tequilla Sunrise as an example. Even if, at some parts of it, a more monochromatic WindLight preset may be applied, most areas of the sim go better with settings that enhance color – for the place is “full of fall colors”, remember? Sure, one can throw some cold green light on it and still get some interesting result. Nonetheless, if they chose to do it, I’d say that, instead of benefiting as much as possible from what that particular SL region has to offer, one would discard some of its most important characteristics (such as fall colors) and would probably create an entirely different landscape on the picture, with an entirely different feeling from the one that a visitor has when they arrive at Arol’s sim. 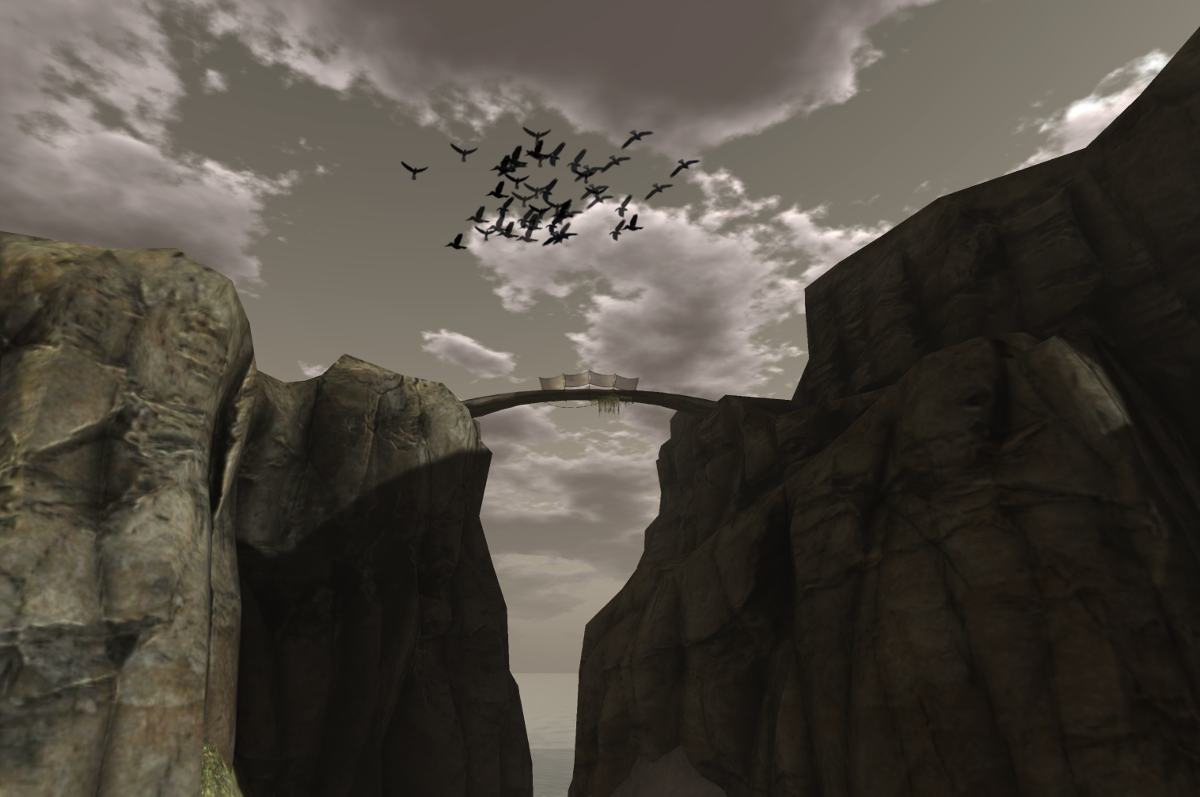 In some areas, a more monochromatic preset may be used (WindLight preset: Bristol) 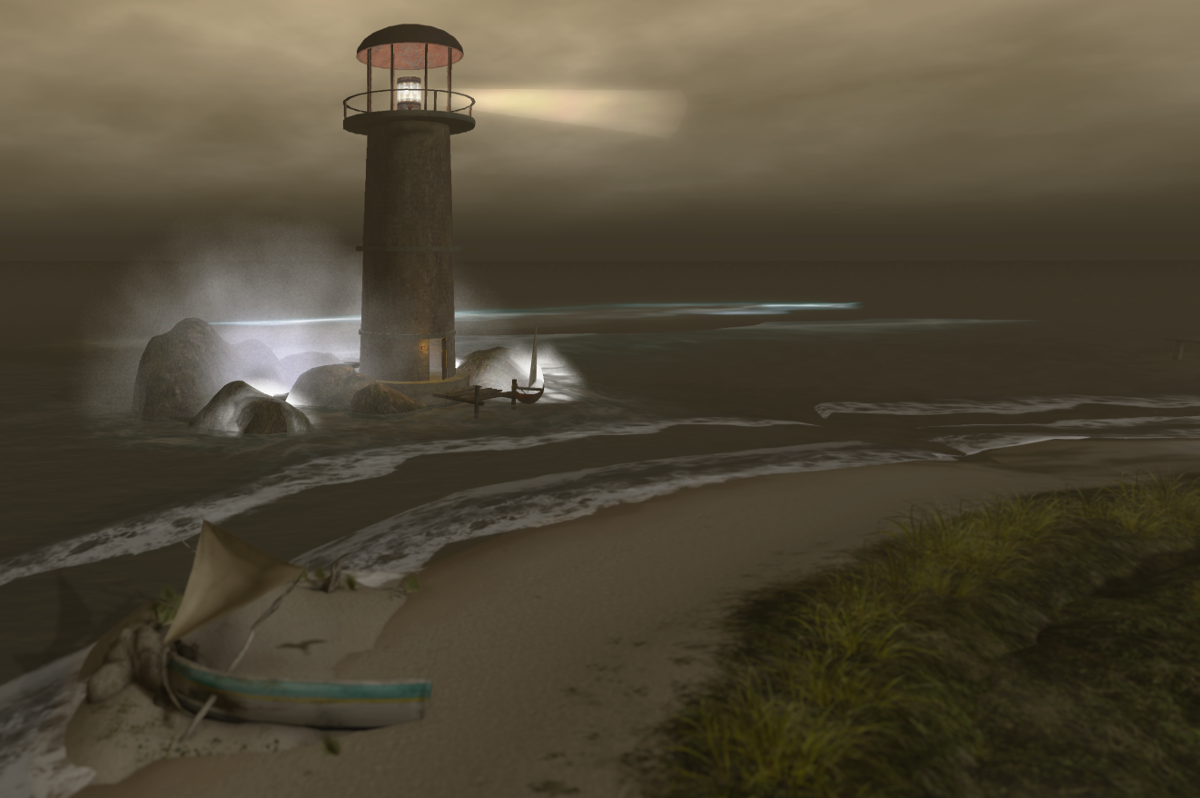 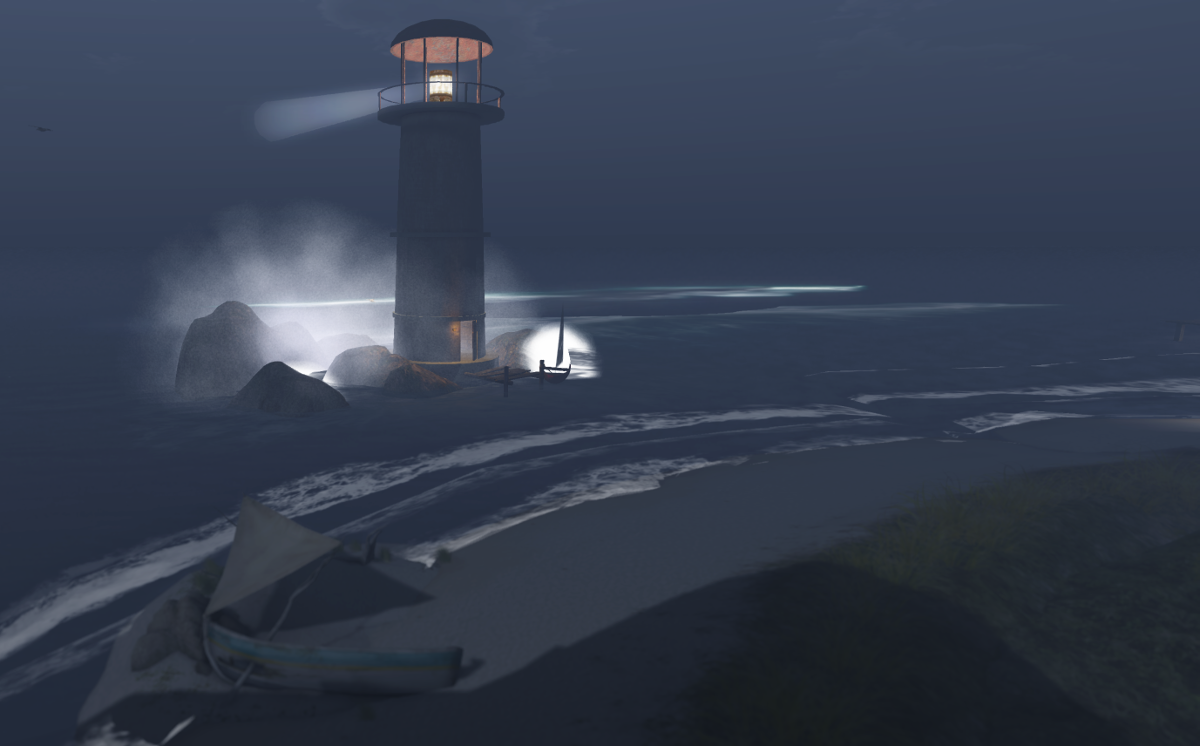 In my journey here, I try to share with my readers what I feel or think of when I visit a certain place – not in a confessional way, but as a reflection that may contribute to a dialog about SL and virtual worlds. That’s why my pics tend to be inspired by the sims that I visit and I try to find some WindLight settings that fit the scene that I see, instead of just transforming the scene and its atmosphere into something else (though in some particular cases things may not be exactly like this).

With that in mind, I could add: see where that inspiration leads and try your own settings to each sim, to each scene. It’s far from being practical, though, and I do resort to WindLight presets distributed by Linden Lab and by other users (most third-party viewers have a big collection of user-made WindLight presets, but if you are using the official viewer or would like to search out there for more presets and learn how to install them, you can start by reading this guide by Torley). Different viewers may have different ways to access the presets, but generally you can find them under the World menu, on Environment Editor. There, you can choose either Sky Presets or Water Presets. I’ll concentrate here on sky presets. I generally choose to edit them, instead of creating a new one.

On the window that will open after one clicks on Edit Preset, one can choose what preset they’d like to use for that specific picture. Making that choice is just the very first step. Now, we have to modify the settings according to our scene – but attention here: when I edit a preset, I never save it (except when I want to create a new one and give it a different name). I keep the window open (or minimized) while I’m using it. That way, my screen will keep showing that particular preset, with the modifications that I introduced to it. When I’m done, I just close the window (without saving).

Now, here there’s a problem for those who are starting to explore the world of SL pics: with so many settings and values to change, it’s easy to get lost. Because of that, let’s reduce our options a bit: if you are just starting to take pics in SL, skip the Atmosphere tab on your sky editor and go straight to Lighting. On that tab, you can try first the East Angle slider. It will change the east for your sun or moon (though it has nothing to do with the cardinal points shown on your map or on your minimap). As a result, both light and shadows on your screen will move to a different angle. Notice that the overall luminosity isn’t affected, but, in some cases, certain objects that were hidden in shadows come to light and vice versa. 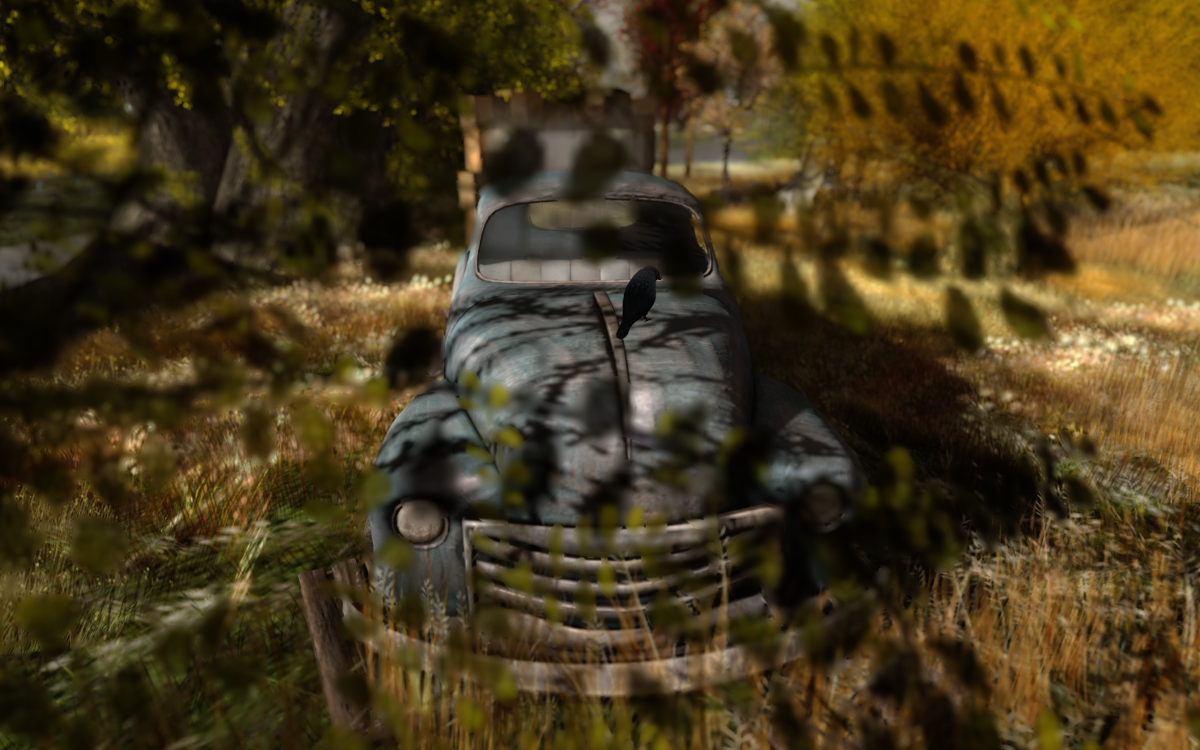 The parked truck: another way to use the Bristol preset, now enhancing colors (WindLight preset: Bristol)

Another useful setting is Sun/Moon Position. It controls the vertical position of the sun or the moon – and then, it does affect general luminosity, not only shadow orientation. We all know, for instance, that light at midday is “harder” than at 4PM. So, changing sun or moon position may actually transform the atmosphere of the scene. The result may be very different from the original preset that you chose. That’s why, in general, when I choose to play with that slider, I start with small changes before I try more radical ones.

You can also play with Scene Gamma. I find it more difficult to explain the effect of that slider, but what you will see is that, with lower values, objects and avatars become darker and, with higher values, they look somewhat washed out. This is interesting in order to get some effects, like silhouettes, old film simulation and so on.

For now, let’s try those three sliders. I’m not saying other settings aren’t useful, but for those who are starting, maybe those will already provide a lot of possibilities to play with. 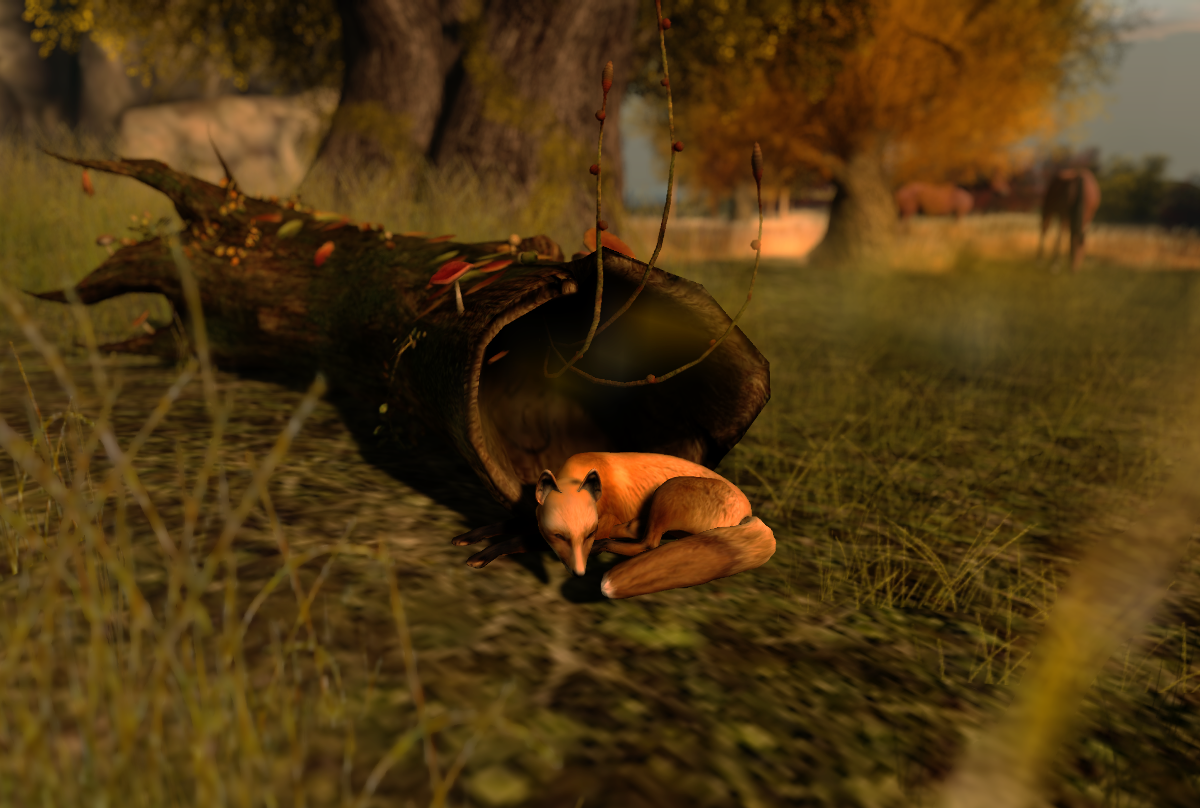 On a final note, I also understand that some people consider all the work with light done after adjusting WindLight. Some will only crop their photos to get better compositions and that’s it. I, myself, don’t think that way. I do process my pics on The Gimp (others will prefer Photoshop). A tip for some basic image treatment using The Gimp is: open your pic, double your background layer, set the upper layer to Overlay, make sure it’s selected, go to Colors > Levels and play with the input levels. Alternatively, instead of clicking on Levels, you can click on Colors > Curves and play with the color curves. In both cases, if the effect looks too strong, you can set your upper layer’s opacity to 70%, 50% or even lower.

8 thoughts on “The eye catcher: an experience on virtual photographing (and some WindLight tips)”