“Cheshire Puss,” she began, rather timidly, as she did not at all know whether it would like the name: however, it only grinned a little wider. “Come, it’s pleased so far,” thought Alice, and she went on, “Would you tell me, please, which way I ought to walk from here?”

“That depends a good deal on where you want to get to,” said the Cat.

“Then it doesn’t matter which way you walk,” said the Cat.

“– so long as I get somewhere,” Alice added as an explanation. 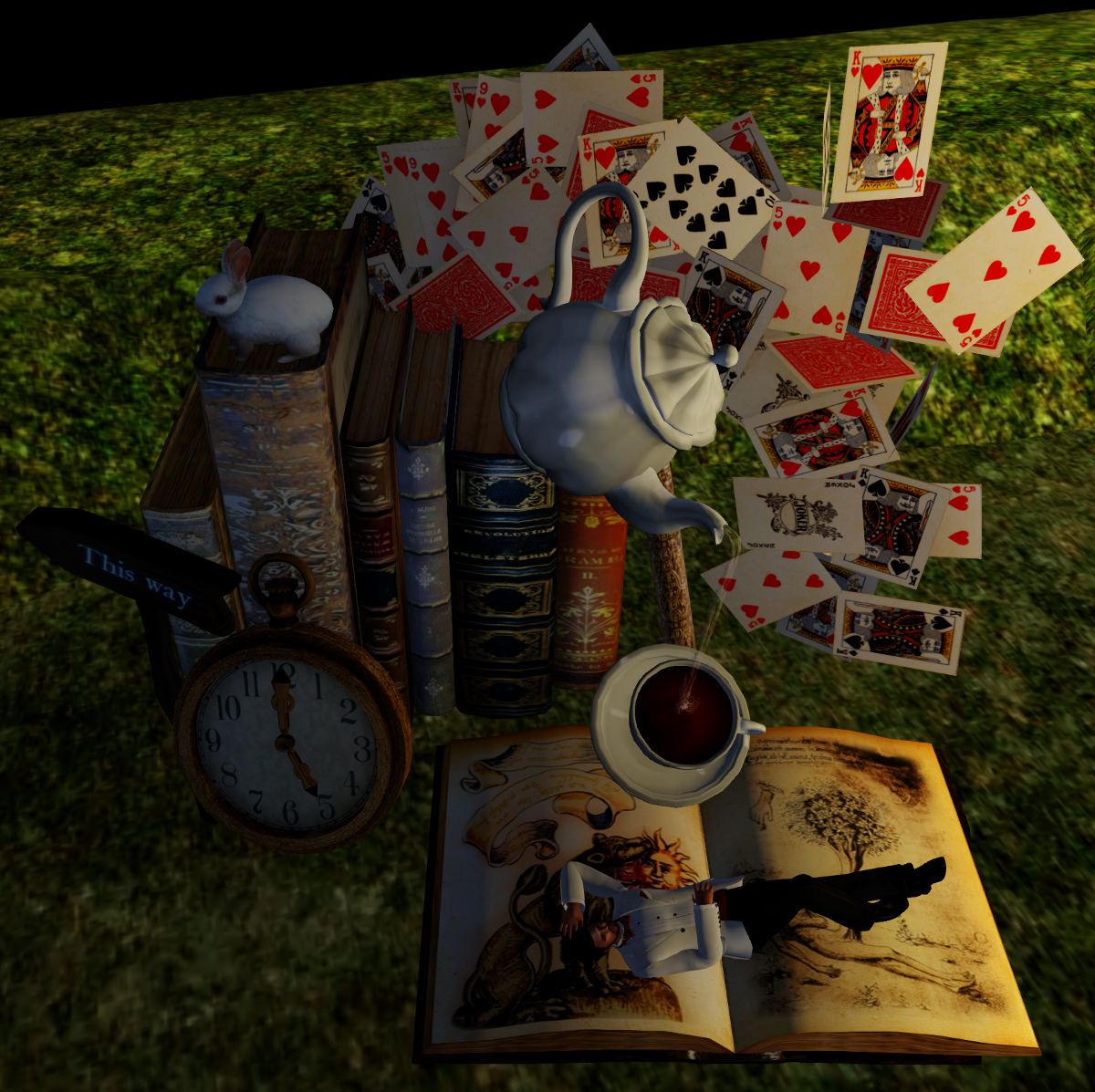 Alice In Wonderland is a brilliant story which became not only one of the most well-known books of the Victorian England but also one of the most quoted works of English-language literature and one of the most famous fictions directed to children – and beloved by adults as well – of all times. Along with its sequel, Through the Looking-Glass, and What Alice Found There, it has had a great success since its first edition (and has never been out of print, for instance), which most certainly has to do with its repertoire of curious characters (the Hatter, the Queen and the King of Hearts, the Cheshire Cat, the Caterpillar and the White Rabbit, among others) and nonsense situations – not to mention its delicious dialogs. 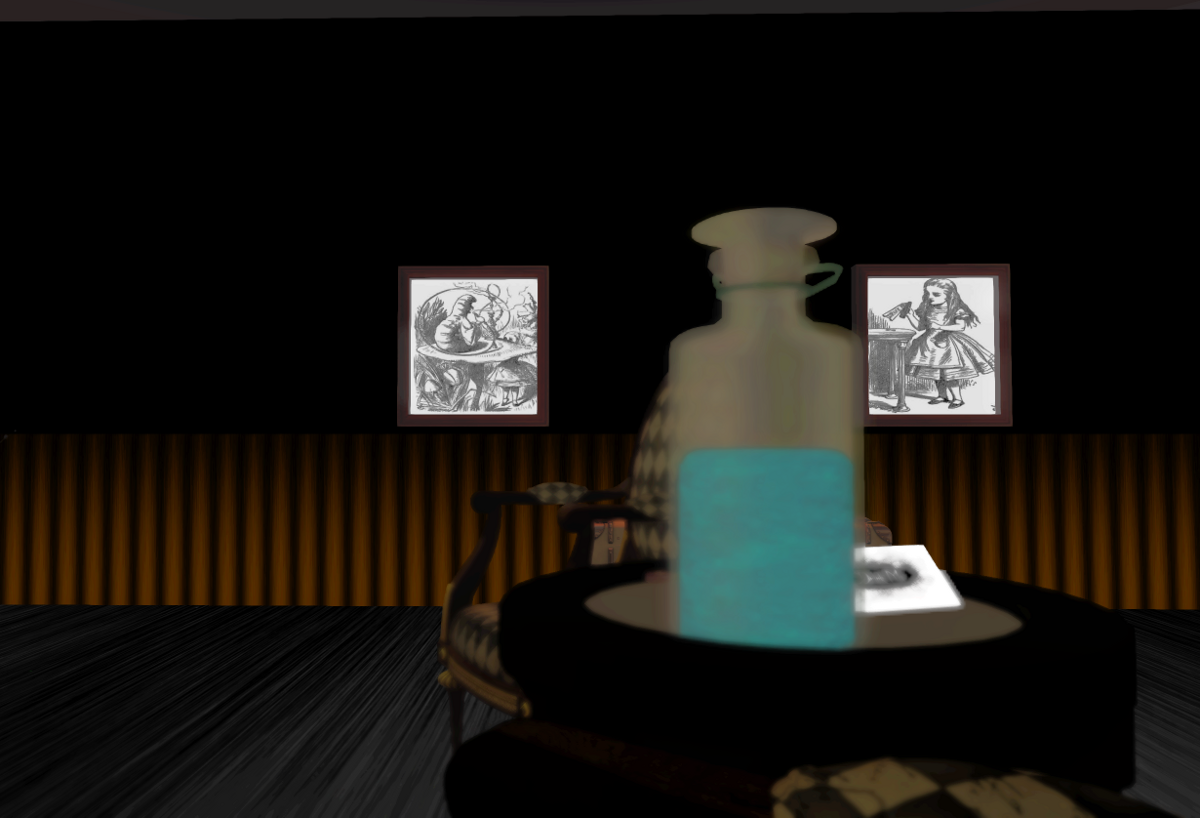 On the wall, references to John Tenniel’s famous illustrations for “Alice In Wonderland”

Enchanted Alice in Second Life reproduces some of those elements, creating a very inspired Wonderland. There you can see cats, rabbits, hats, mushrooms, pocket watches, playing cards and many other elements from Lewis Carroll’s (or Charles Lutwidge Dodgson’s) original story. Of course, the journey starts by going down the rabbit hole. From there, do as Angellace Havoc’s poem (which you can get in a notecard at the landing point) says: 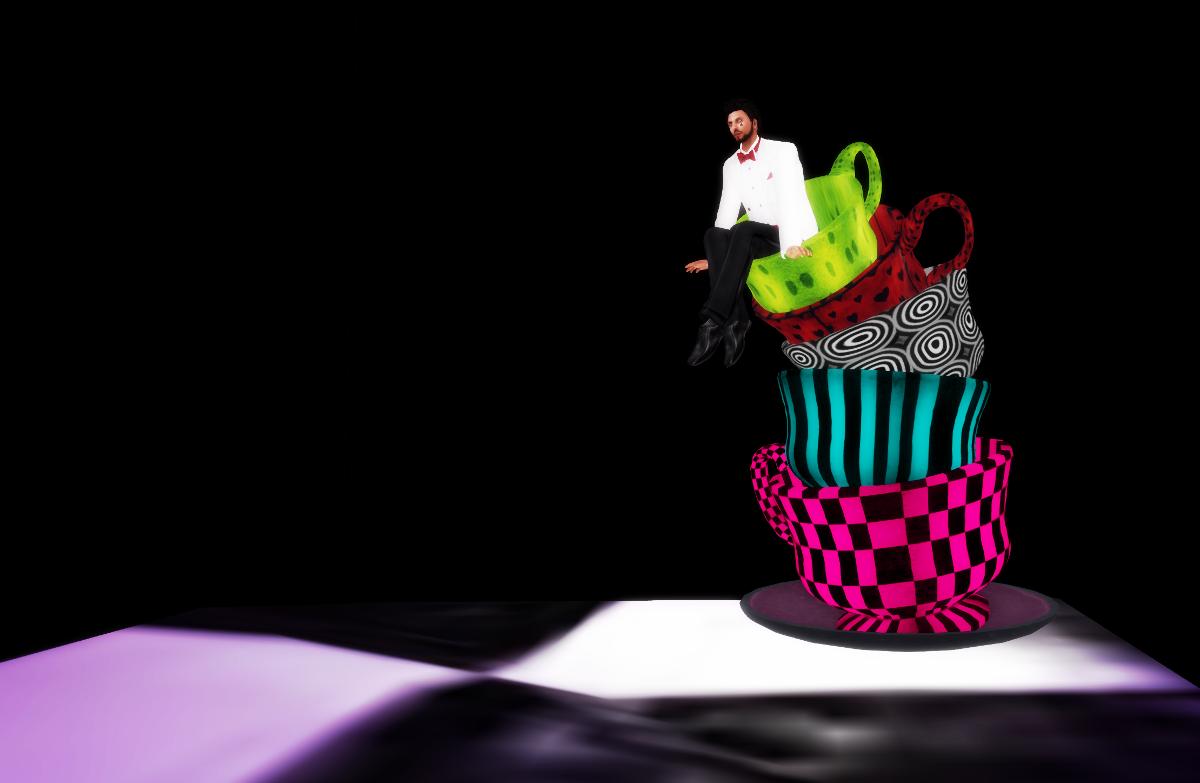 No rhyme nor reason does it make
but that doesn’t cause it to be a mistake
We’re all mad, but that doesn’t make us all bad
It is amusing
but not a park..
it all looks better in the dark
Secret doors and hidden floors, you have to look to find
Not at all are we crazy
just slightly out of our mind.. 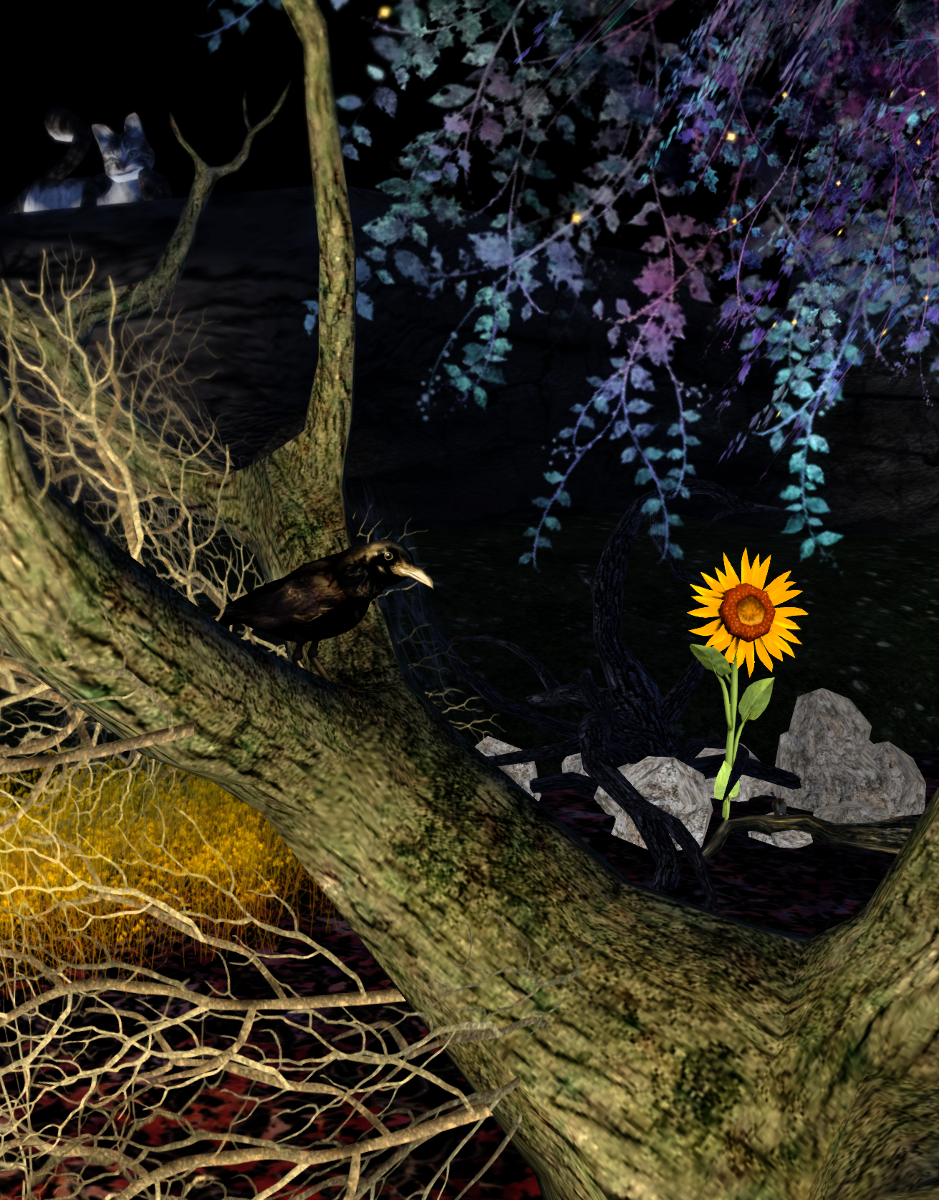 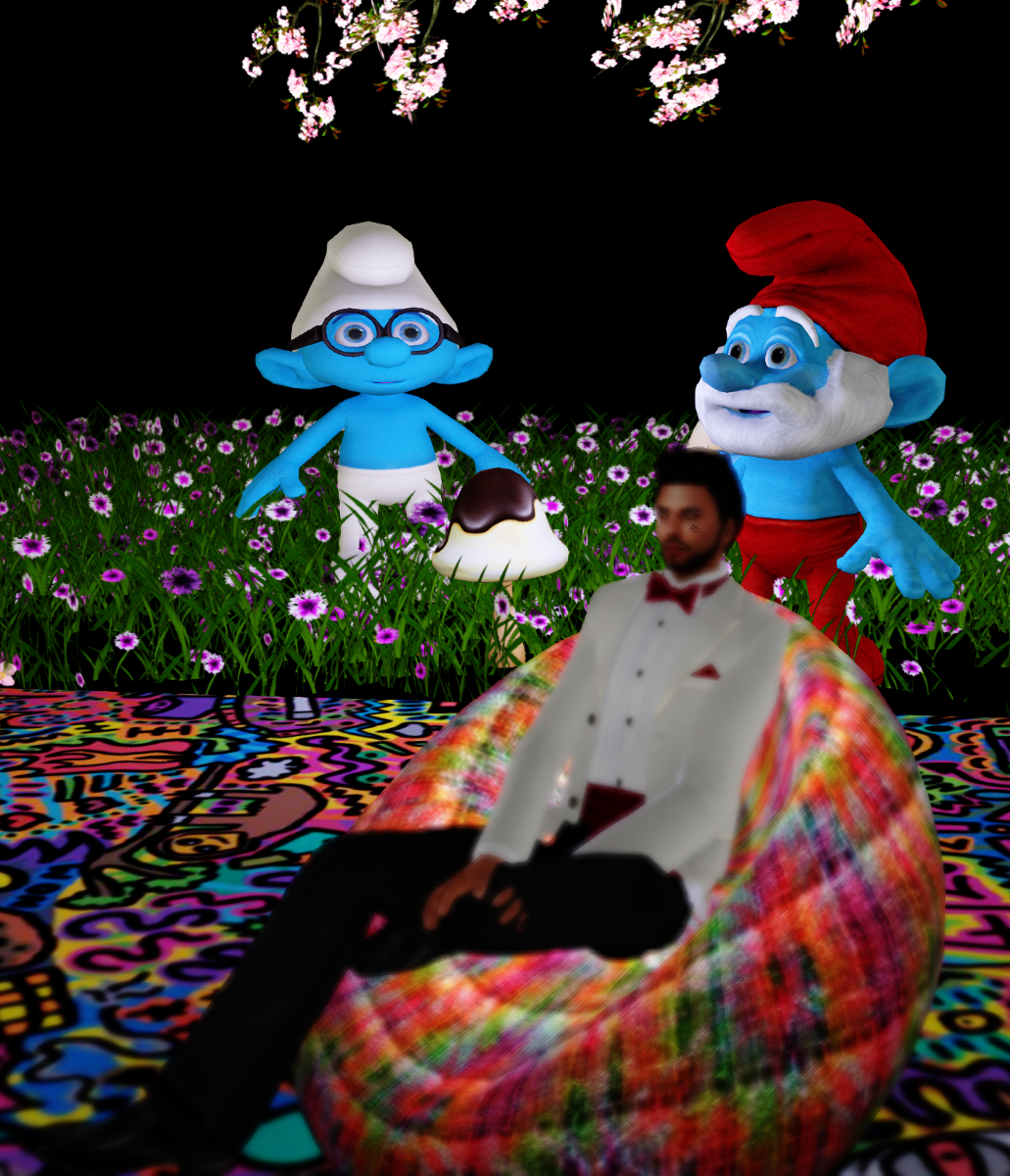 Smurfs in Wonderland: “Dude, we’re in the wrong story”. “Dude, I think we smoked too much”

In your exploration of Enchanted Alice, take your time, don’t be in a hurry. The place is in some aspects like a game: there are many hidden areas in it, small details to be found. There are also some additions to Wonderland: Edgar Allen Crow, the Smurfs… For Wonderland is a dream, and dreams do not always respect boundaries.

It would be “natural” to think of the parallelisms between Wonderland and our virtual experiences. Don’t we travel to a new reality when we join Second Life? Isn’t it more or less like going down the rabbit hole or going through the looking-glass? Don’t we all find mad hatters along our ways? No? Are you sure? Just look around and I bet you will find them. What’s your Cheshire Cat? Who is your Queen of Hearts?

I’ll leave those parallelisms and those questions to the reader, though. All that I’ll say here is: let yourself be surprised, positively surprised. 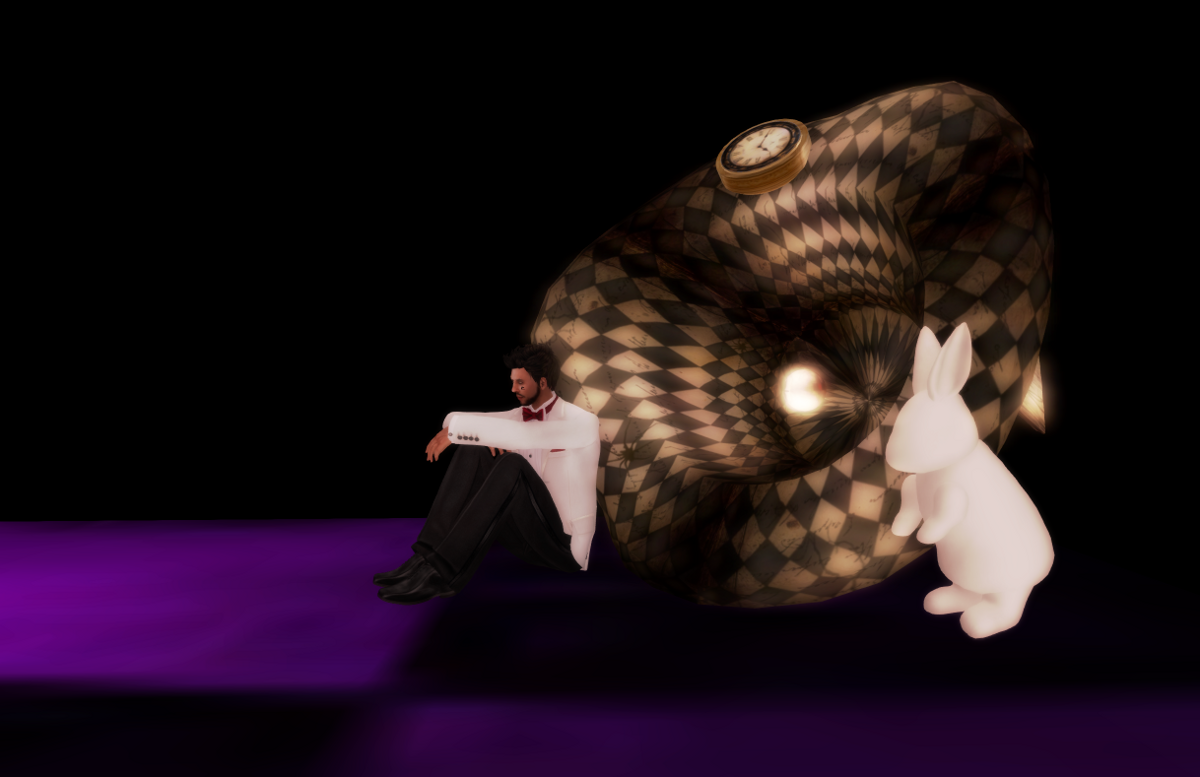 Ricco thinking: “The Hatter has been here” 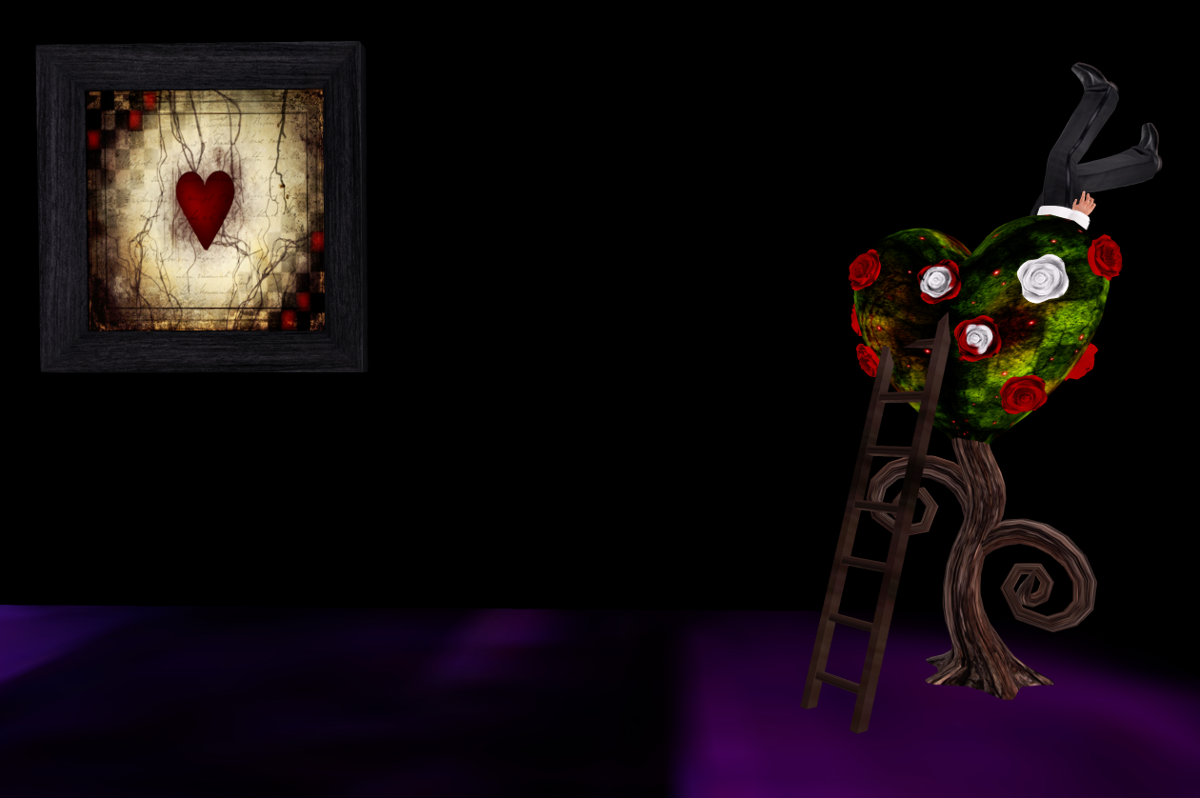 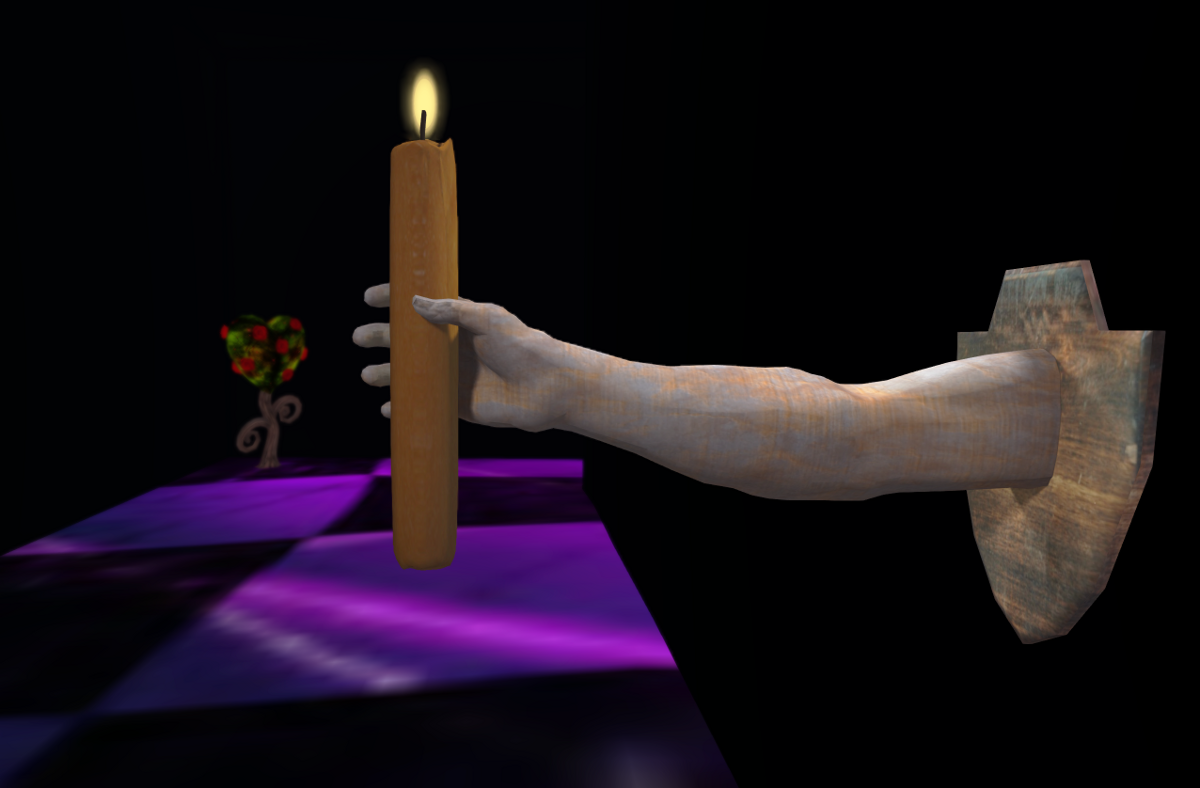 If surprise has to do with some expectations, one could say that Enchanted Alice is not exactly surprising, for it only presents us once more the elements of Lewis Carroll’s universe. In other words, we know what we will most likely see there. Nonetheless, not only it brings some elements that Carroll himself has never imagined, but it also shows us a very particular way to display some of the things described in Alice In Wonderland. 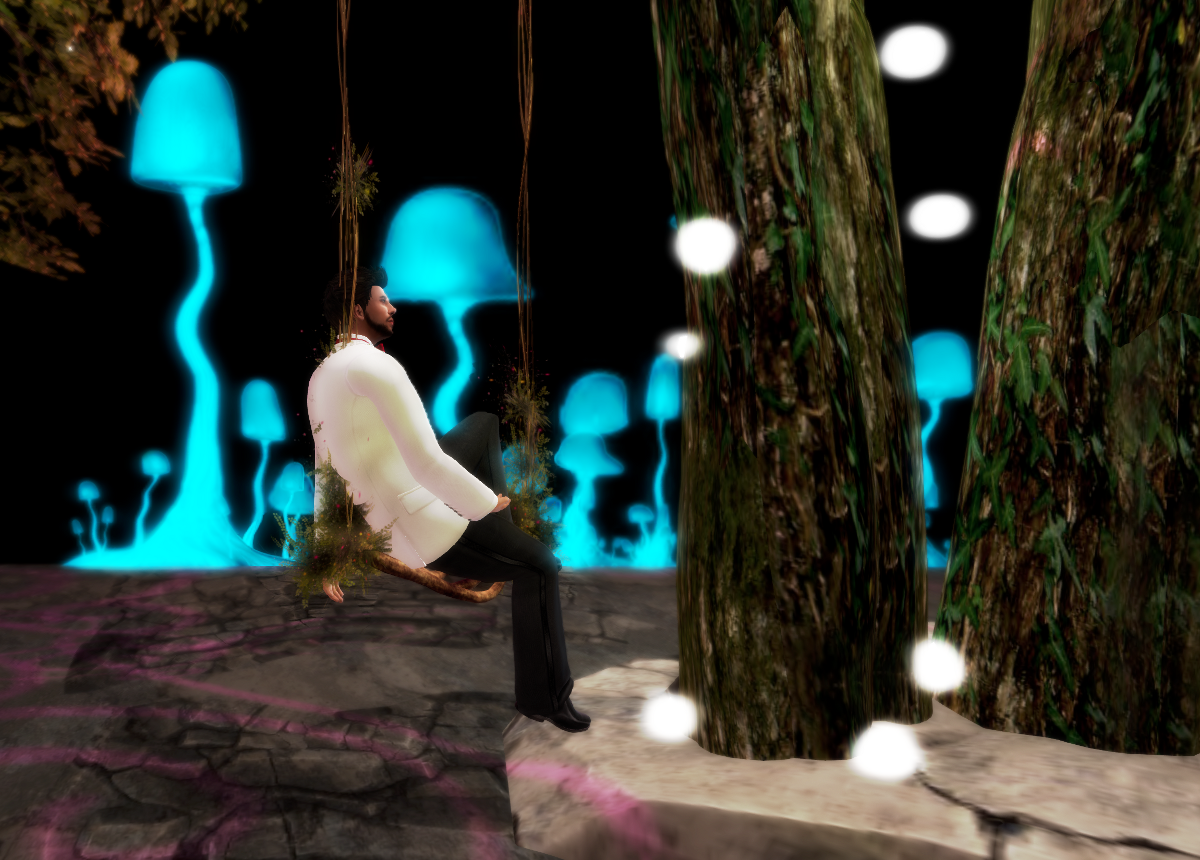 Ricco swings before the mushrooms 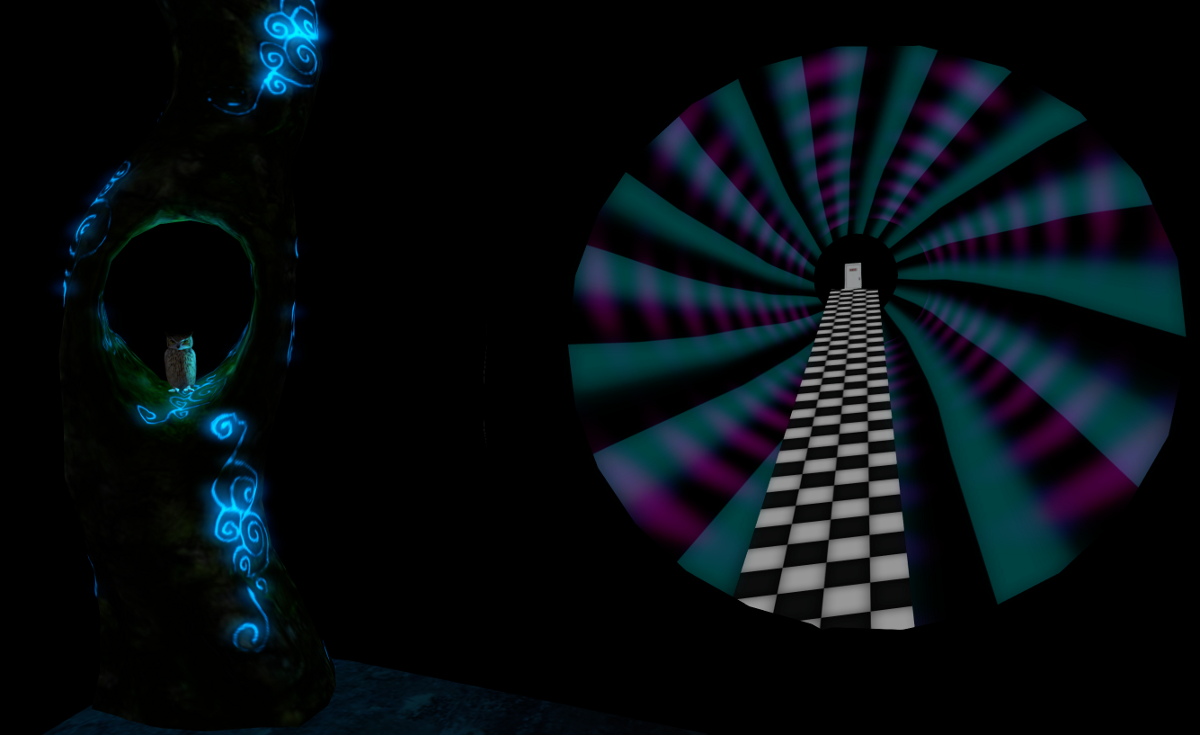 The game itself of having to find some of the hidden areas, some of the doors to the following stages of that Wonderland, of not knowing what’s around the corner – such a game can make your exploration surprising and funny. Not to mention romantic: if you have a partner or a date, you can, for instance, dance with them immersed in some amazing scenery. 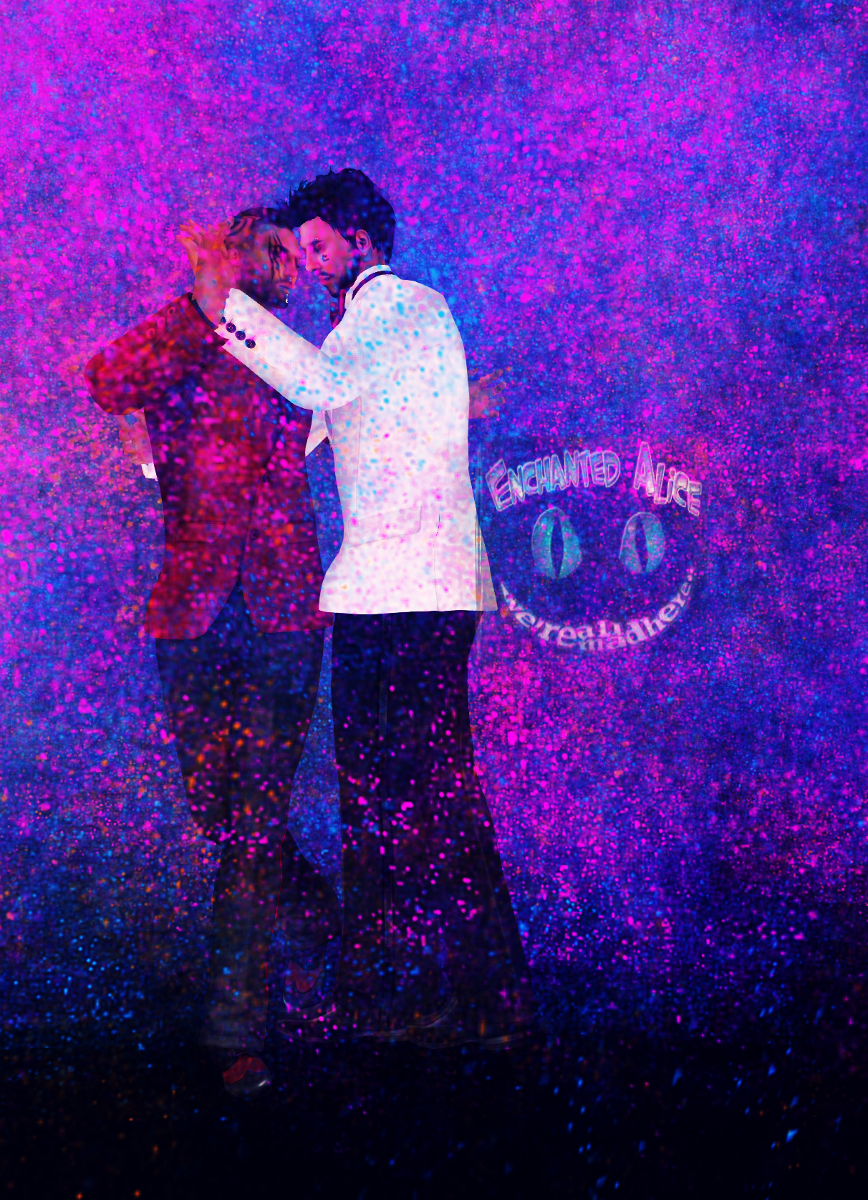 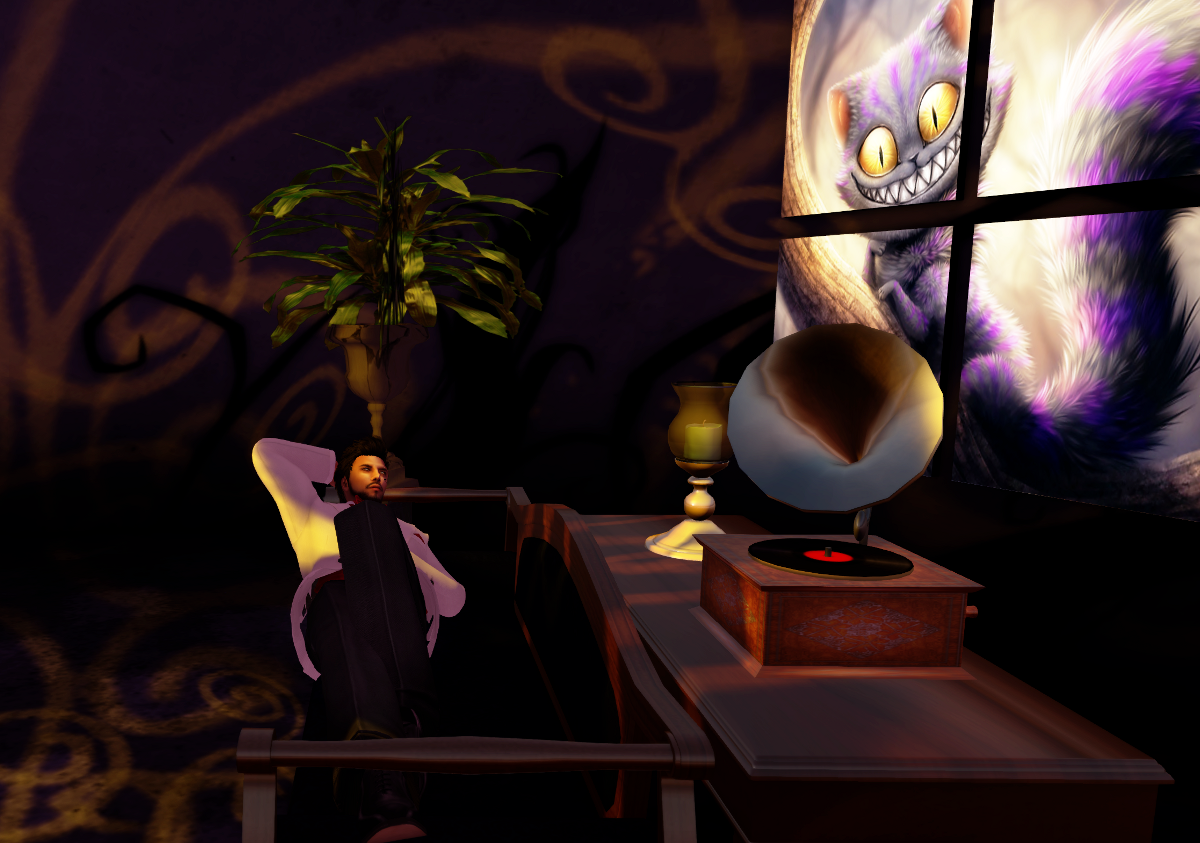 Relaxing under the eyes of the cat 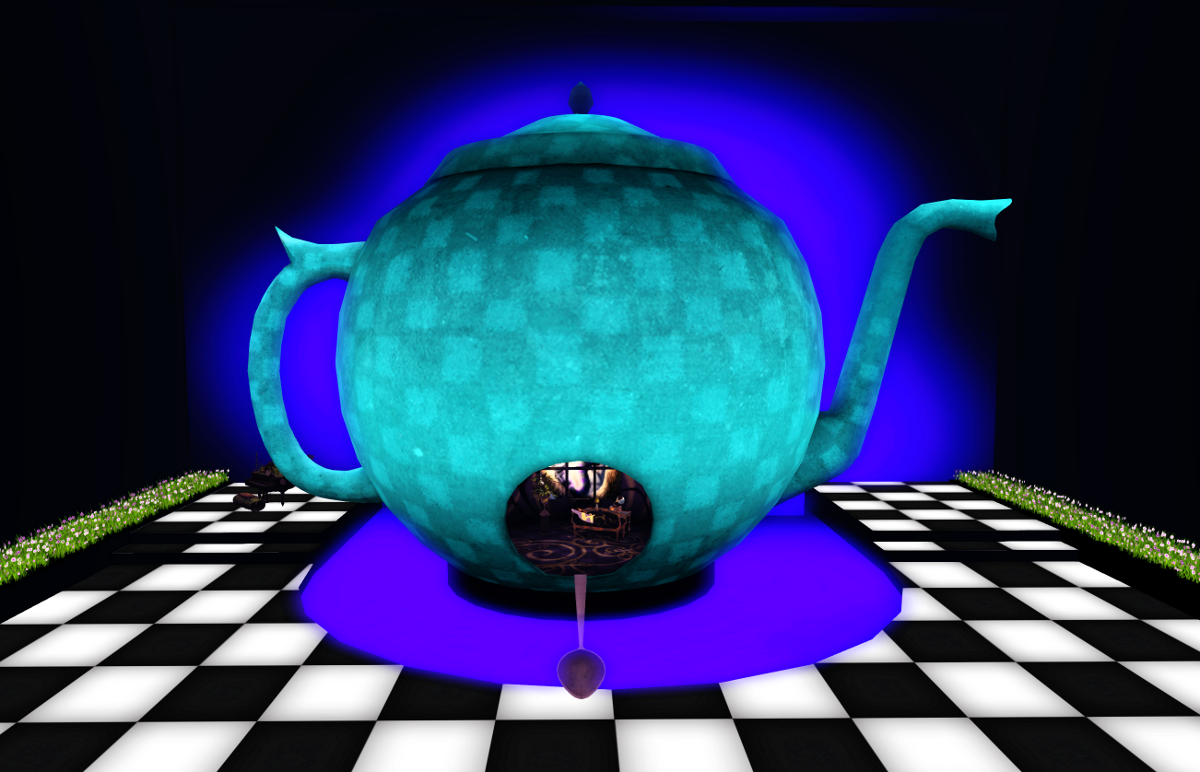 I had such a great time exploring Enchanted Alice – and taking my partner with me – that I certainly recommend the experience to those who like to be surprised and, of course, enchanted. And if you’d like to go taking pictures there, you can share the results on their Flickr group, which is worth seeing too. 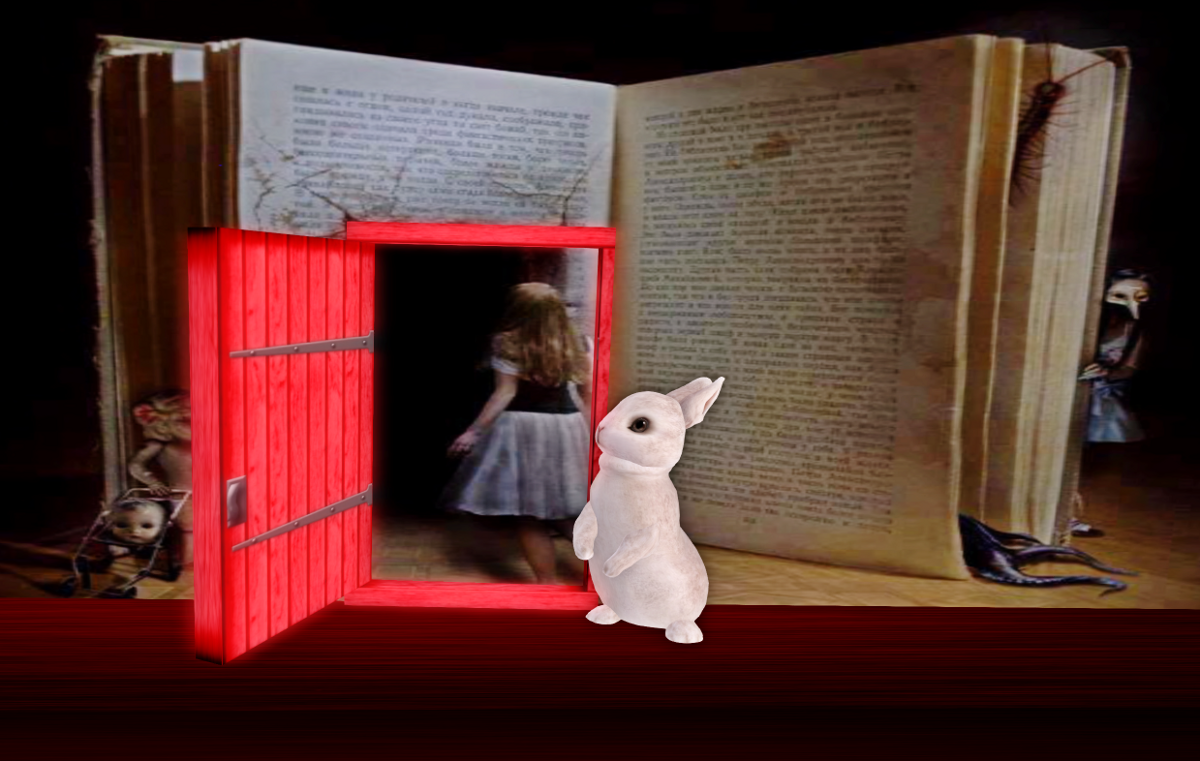 A way to go inside the book 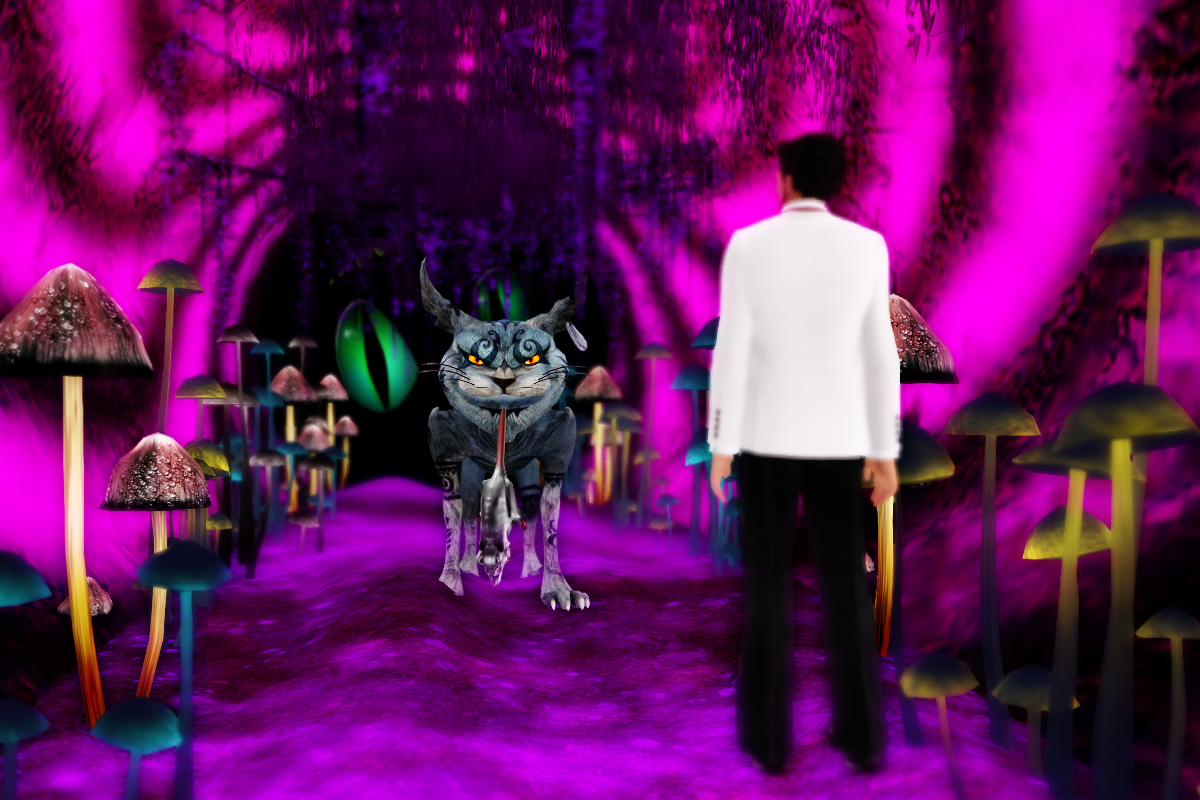 Ricco, the cat and the mouse (and mushrooms)

As a final note, a curiosity: in one of the rooms at Enchanted Alice, there’s an open book on which you can read a passage of The Great Gatsby, by F. Scott Fitzgerald (many thanks to Randy for having called my attention to it). 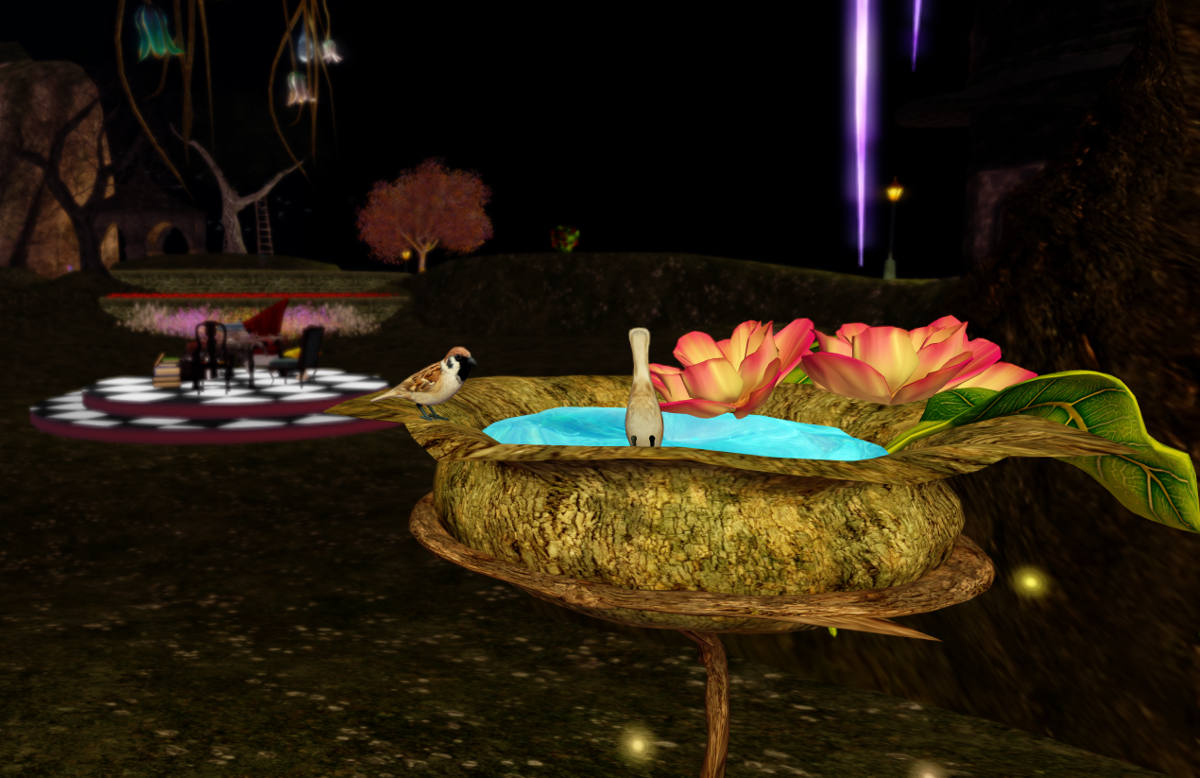 Birds drinking from the fountain. On the background, tea is served

8 thoughts on “Going down the rabbit hole”